December 1 2018
113
Information Agency TASS reports that in the Nazyvaevsky district of the Omsk region several dozens of wagons of a freight train derailed. According to the latest data, we are talking about military composition, in which, in addition to tanks with fuel and lubricants, military equipment was also transported. 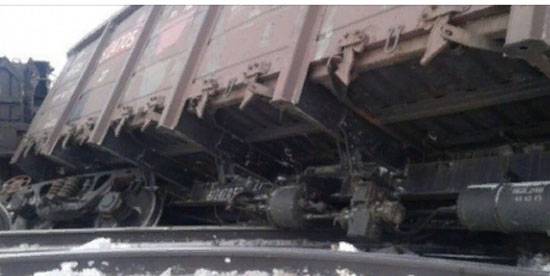 The local emergency services report states that the train crashed near the Mangut railway station (on the Nazyazevskaya - Ishim section) of the Sverdlovsk railway at about 21: 30 Moscow time before.

In total, the 71 railcar and platform came off the rails, of which more than 20 rolled over. Among the overturned - five tanks with fuel (according to some, we are talking about fuel oil).

It is noted that armored vehicles of the Armed Forces of the Russian Federation were on several descended mobile platforms.

Derailment of wagons caused certain damage, including damage to the contact network, which led to a disruption of train schedules. For example, passenger trains Moscow-Novokuznetsk, Moscow-Abakan, Moscow-Vladivostok, Moscow-Neryungri and others

According to official data, there are no casualties as a result of the incident, the ecological situation in the Mangut area is normal. Emergency services are working at the scene of the incident, including dealing with restoring damaged lines.