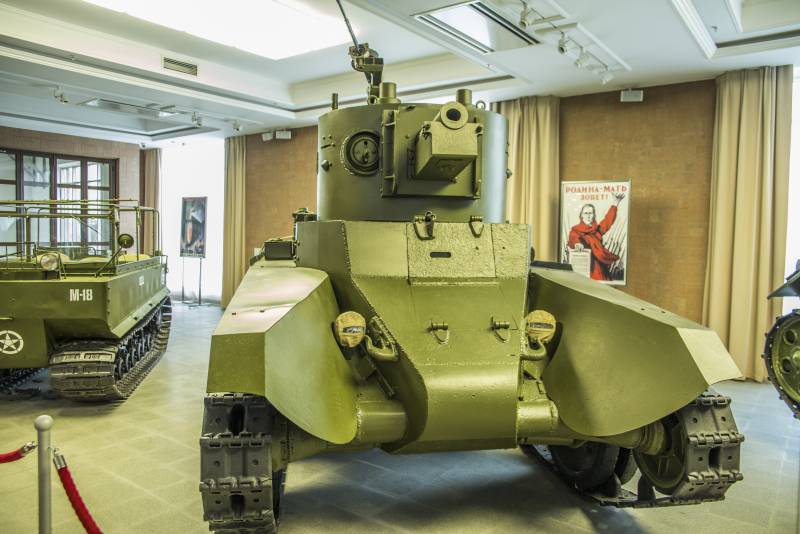 In general, already in the mid 30-ies of the last century, the military leaders and engineers of the Red Army came to the conclusion that with artillery weapons tanks need to do something. The immediate initiator of the re-equipment was the notorious “strategist” Tukhachevsky, who proposed the idea of ​​arming light tanks T-26 and BT-7 with 76 mm caliber guns or Kurchevsky's dynamo-cannons.

As is known, Kurchevsky’s guns “did not enter”, but the idea of ​​installing a more powerful gun and turning a light tank into an artillery support tank took root. 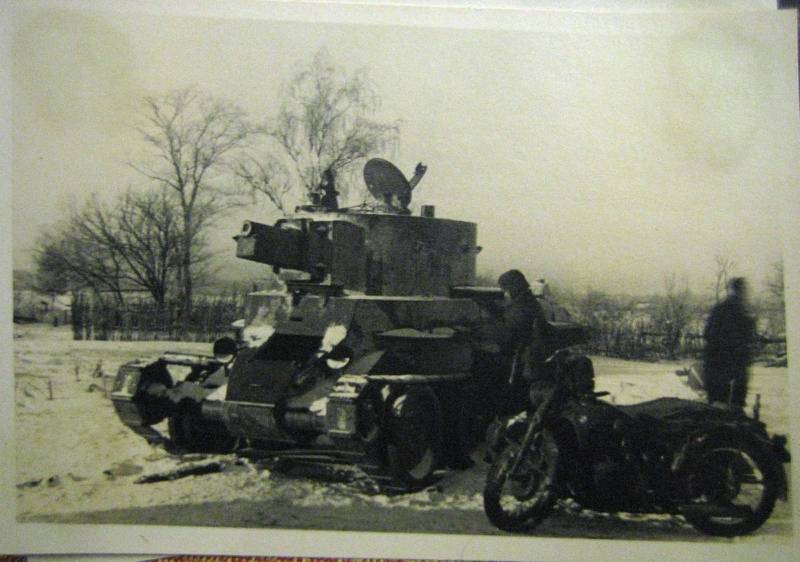 And here it is worth making a small digression retreat into history and strategy.

Let me remind you that in those years the Red Army planned to beat the enemy with small blood on its territory. In fact, everything turned out somewhat differently, but the artillery tanks were planned precisely as tanks supporting the offensive. And it will become clear a little lower when we begin to disassemble the very idea of ​​rearmament.

And the idea was this: install a new turret with a 7-mm short-barreled gun on the BT-76. Why precisely short-barreled? Everything is simple: for the foreseeable future there were no long-barreled “take and put” readiness to such a degree. 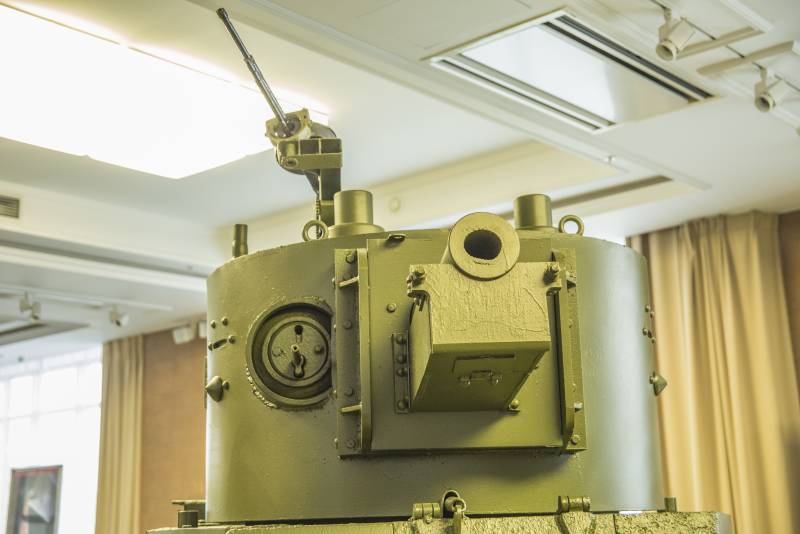 Of the guns available at that time that were suitable for installation on a tank, only KT-28 and PS-3 existed in serial production.

But PS-3 did not go into the series, because it really was a “leap over the head”. You can read about this interesting development with pleasure. here, and we are repelled by the fact that the only suitable option was the CT-28. 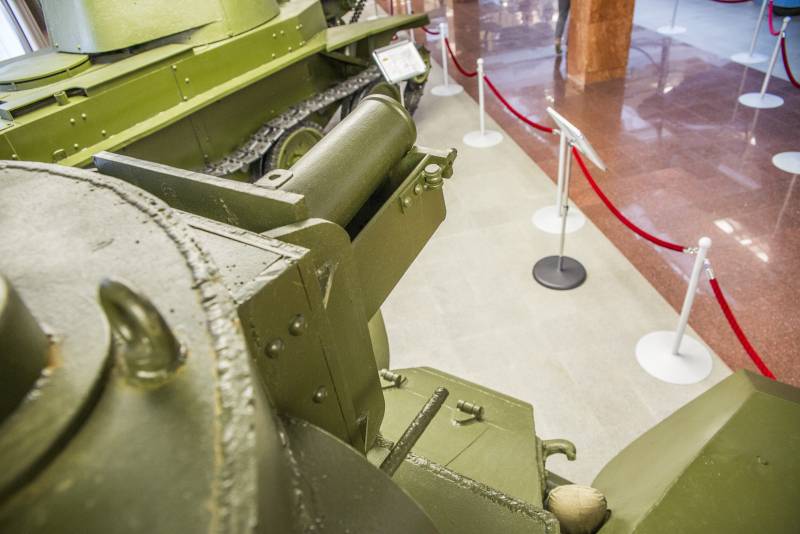 Why was it suddenly necessary to use the caliber 76-mm, if any tank of that time calmly “took” the 45-mm cannon of Soviet tanks?

This is definitely not for tanks. Well, maybe the lightest projectile with such characteristics was dangerous. But infantry, bunkers, pillboxes, artillery batteries, mortar batteries - these are the clear targets for this weapon.

Heavier projectile, which clearly gave more fragments than the 45-mm fellow, was actually more expedient to use against the above list.

I will especially emphasize - precisely in the offensive.

So, in fact, KT-28 received a residence permit, albeit as a temporary measure, before the appearance of more powerful artillery systems in mass production. True, more powerful guns did not appear in 30s, and the KT-28 was installed on all heavy T-35 tanks and most of the medium T-28. 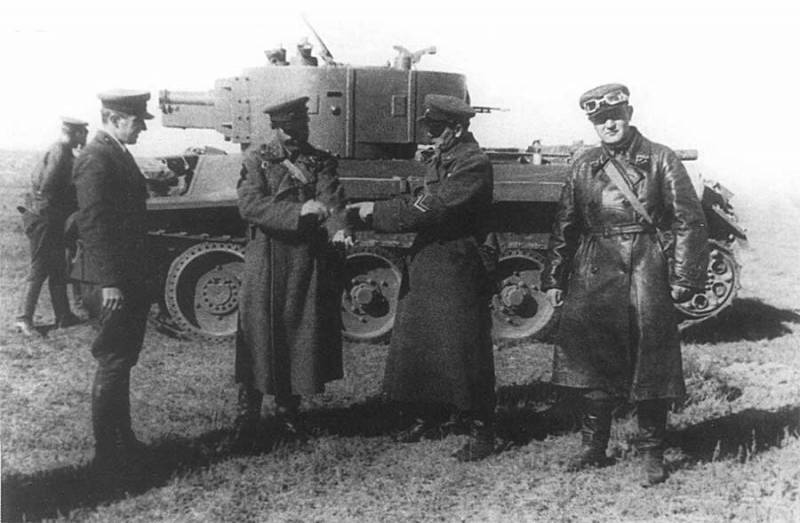 An original elliptical-shaped tower with a sloping roof was installed on these tanks. In the niche of the turret there was a drum kit on 18 shells and (!) A radio station.

The tower turned out to be very similar to the main T-28 / T-35 tower, but no, this is a completely different design.

To the right of the gun was a DT machine gun in a ball mount. Another DT was installed in the front hull sheet as a course one. 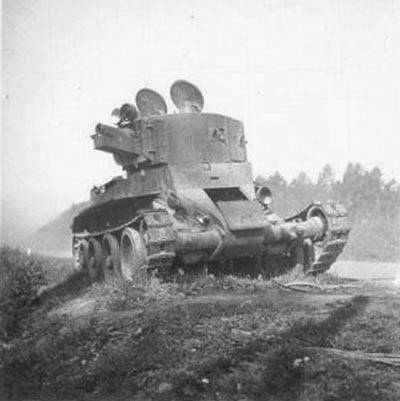 Machines were sent to the tests, which showed a completely unsatisfactory characteristics of the tanks. The fighting compartment turned out to be too close even for a crew of three, ammunition in 18 shells was clearly insufficient, the tank mass increased significantly, respectively, the speed dropped.

Works were suspended until the fall of 1934. What happened? And they passed the tests of the artillery tank T-26-4, which ended in even greater fiasco. But on the basis of all the tests, it was decided to install the second version of the turret for T-7 (КТ-26) with a KT-26 gun on BT-28А. 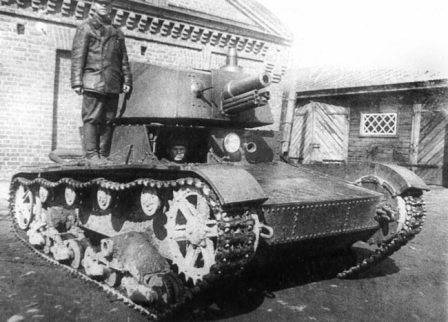 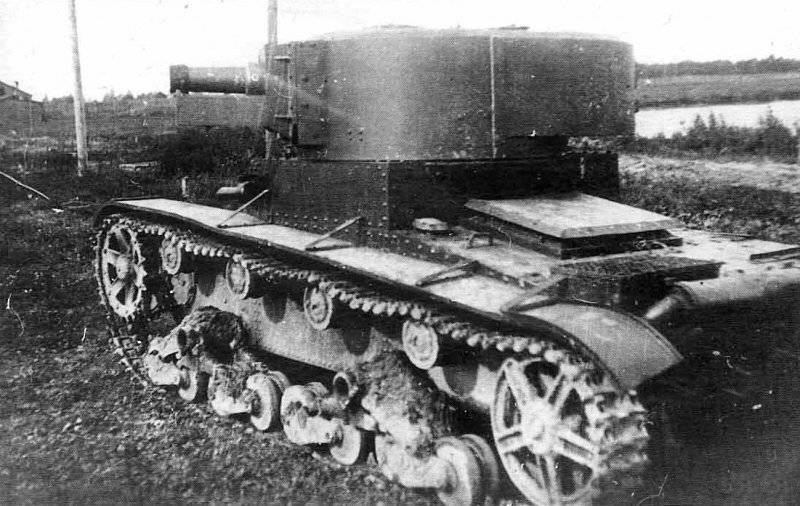 And suddenly it happened.

Before installation on the BT-7, several changes were made to the design of the tower, strengthening the roof, refining the turret chase and providing for the installation of a stern machine gun. 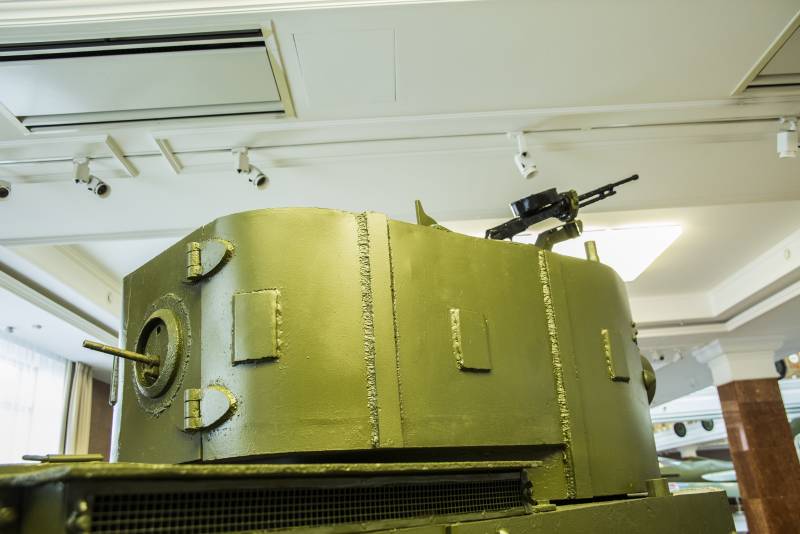 Ammunition was significantly increased and amounted to 50 shots and 3339 ammunition for machine guns DT. Aiming the target was carried out using either a TF telescopic sight or a PT-1 periscope sight. 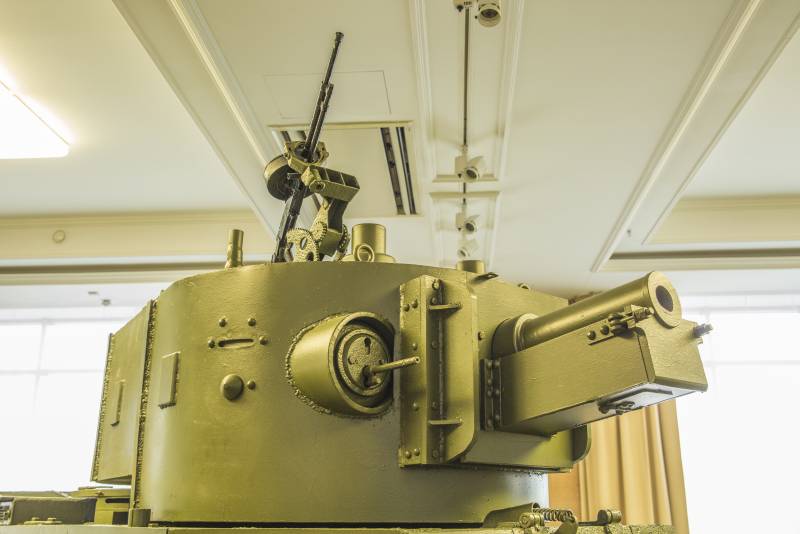 The tank received the designation BT-7A and in the middle of October 1935 went to the test.

In general, everything turned out: the driving characteristics remained almost at the level of the serial BT-7, and the firepower increased.

But by that time, T-28 and T-35 had already entered the series, and BT-7А was in the role of a catch-up. Only in the middle of 1937, a series of military trials was released. However, the BT-7 tank already had by that time an established reputation of a good car, and the BT-7А was received positively by the troops.

At the Kharkov Locomotive Plant from August 1937 to January 1938, 155 machines were assembled. Military acceptance took 122 tank, as the rest were waiting for the guns CT-28, the release of which was stopped. For the entire 1938 year, only 10 guns were obtained, which brought the number of accepted machines to 132.

The fate of the rest of the unarmed BT-XNUMHA is not entirely clear. Most likely, they were converted into conventional BT-7, since the tower was designed to replace the 7-mm cannon with 76-mm.

Then they began to think again, “what to do?”. CT-28 out of production, PS-3 in the series did not go. There was an option with a semi-automatic tank gun L-10. The gun was released in a small series and she even re-armed with a number of T-28 tanks.

There was even a question about equipping this T-35 with a weapon, but due to the lack of significant advantages over the CT-28, this idea was quickly abandoned. The Red Army Armored Directorate at the beginning of 1938 issued a new task to develop a tank gun.

So it turned out at the exit "new" gun L-11, which was all the same L-10 with an increased barrel length and a reinforced breech. Accordingly, with all the same flaws L-10.

The gun did not go into the series, all the more so that on the tests such defects appeared that did not allow the gun to be safely operated.

BT-7A was left without a gun.

The last attempt to give the army a tank of artillery support was the consideration of the possibility of installing the Grabinsk F-32.

By the way, it could get quite a good option.

Grabin used in his project a swinging part of the F-22 divisional gun of the 1936 model with a shortened barrel. When comparing the L-11 and F-32, it turned out that the F-32 has a lower cost, with high reliability, rate of fire, and good ballistic performance.

Non-deficient materials were used in its production, and the compatibility of many assemblies with the F-22 gun made it possible to quickly start mass production of the F-32. 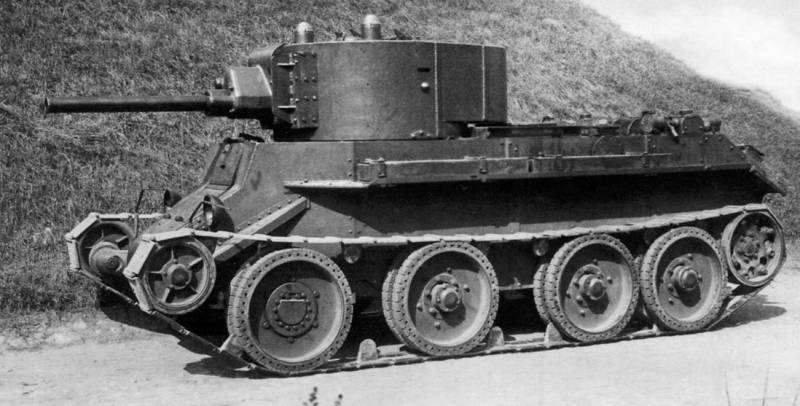 The tests carried out on the BT-7A, fully confirmed the high performance of the Grabin cannon. But…

And BT-XNUMHA again left without weapons!

The re-equipment of old tanks with F-32 guns was abandoned in favor of the implementation of new KV and T-34 tanks.

And here lurked a small, but “ambush”.

Maybe not the best, but already tested, including fighting, BT-7, T-26, T-28 just took, and sent in retirement. Having made a bet on new models, which really have not yet begun to produce. And when they began to produce serially KV and T-34, then these new tanks naturally had a full set of "childhood diseases".
And it is as if normal.

It was not normal that the elimination of numerous shortcomings and full-scale development in production took time, moreover, precious time in the conditions of the outbreak of war.

It can be said that the modernization potential of the BT, T-30 and T-26 mastered in production and tested in battles as early as the 28s was not used. And that makes sense. It was in vain to reject even if not quite new equipment.

By the way, the Wehrmacht perfectly demonstrated how to use captured tanks.

The idea of ​​both an artillery support tank (implemented by the Americans) and an ACS based on the BT-7 would be quite realizable and useful. 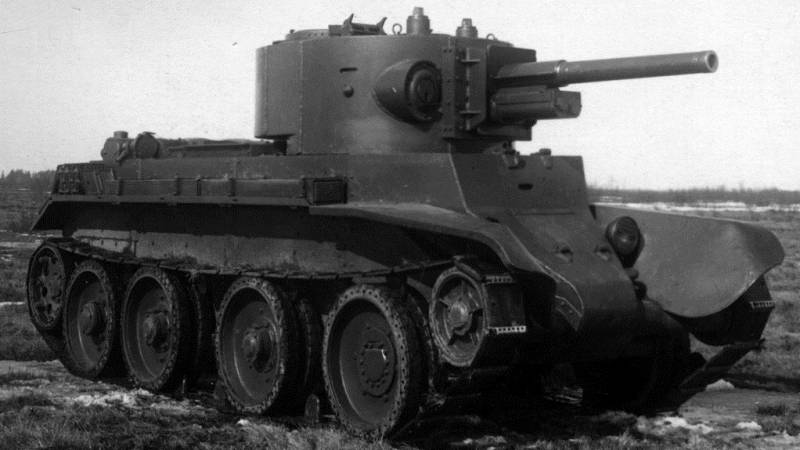 All in all, it would have been good to change the candle suspension and Christie’s “guitars” to a more advanced one, equip the tank with a more spacious tower, really under the 76-mm cannon, and then strengthen the booking to 40-50 mm. And the turret for the commander with surveillance devices.

Coupled with an X-NUMX-mm F-76 or F-32 cannon, a real fire support machine could be very useful. It does not matter in principle that it would be, an artillery tank, self-propelled guns, anti-tank installation, the fact of the possibility of mass production and subsequent availability in parts is important.

It is clear that nothing was done for a number of reasons; by the beginning of the war, they did not learn to make verified decisions and to re-equip the army without losing combat capability. Illustrative examples of the shaft, the story of the adoption of the KV and T-34 before the memoirs of Pokryshkin, as in the Air Force came MiGs.

The idea of ​​a phased modernization only was in the air, but in reality only the war taught it.

It is difficult to talk about the combat use of BT-7А, since a fairly small number of these tanks were scattered throughout all military districts.

The BT-7А did very well in the Winter War, that is, in the conditions for which these tanks were designed. Support the advancing infantry.

In the period from November 30 1939 to March 13, 1940 six artillery tanks from the 1 th lbbr were actively used for fire support of advancing tanks and infantry, as well as for firing at the DOTs of the Finns and the counter-battery struggle.

Interestingly, all 6 vehicles were damaged during the fighting (4 damaged by artillery and 2 was blown up by land mines), but all of them were repaired and returned to the army.

At the time of the start of the Great Patriotic War in the Red Army, there were 117 tanks BT-7. It is clear that not all were in combat readiness, but nevertheless, the tanks were listed. The exact number of BT-7А tanks that were in border districts on the eve of the war with Germany is hardly likely to be established now.

It is no less difficult to find any evidence of the participation of tanks in battles, and even more so, of effective participation. Not to statistics was, alas. 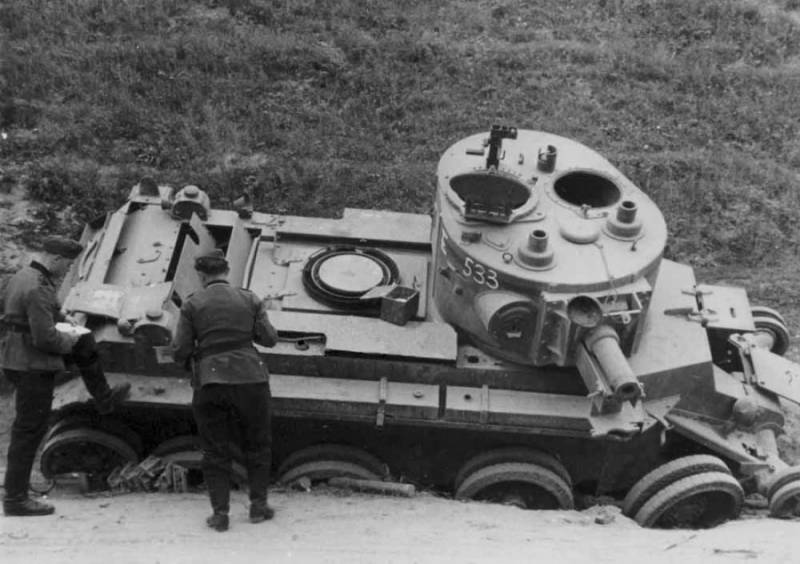 Judging by the German chronicle, virtually all BT-7А were lost in the first days of the war. 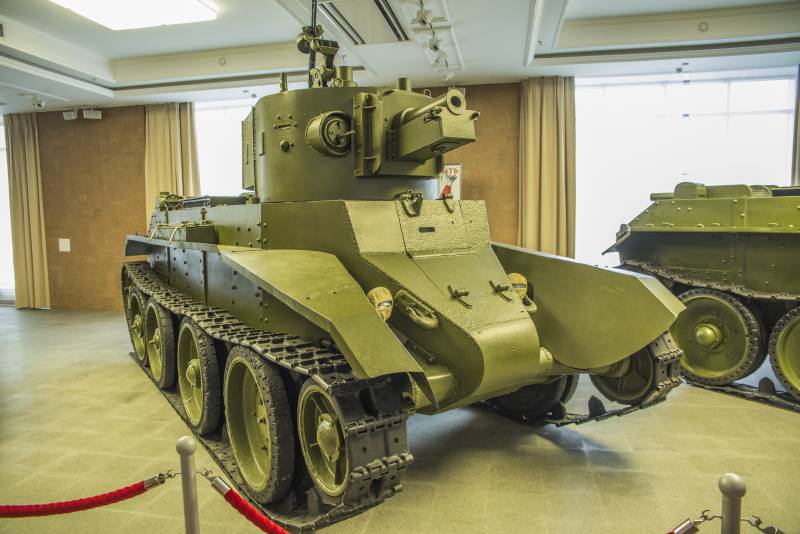 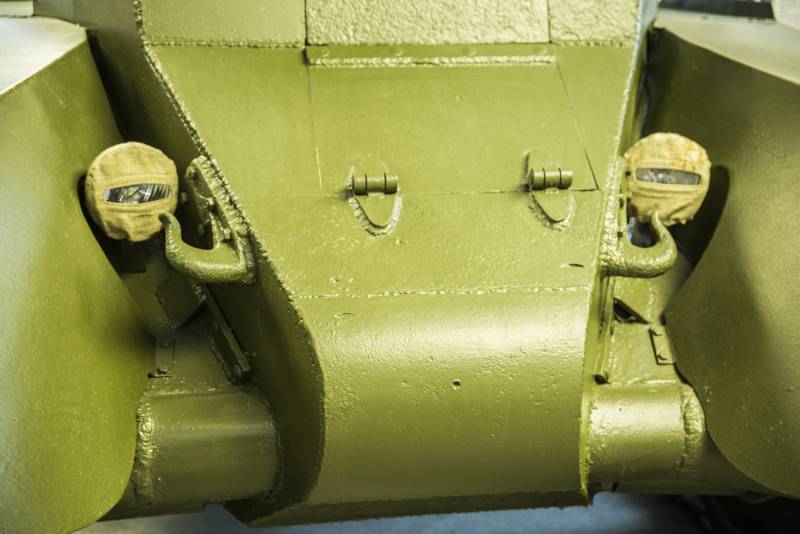 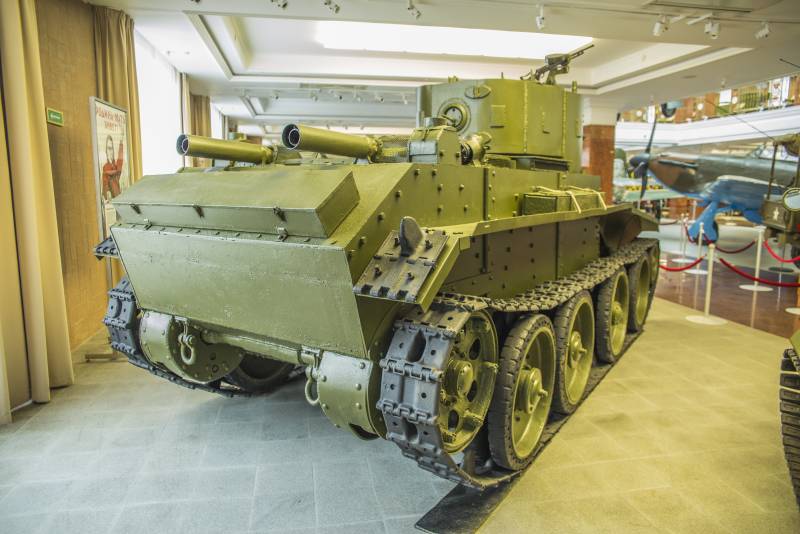 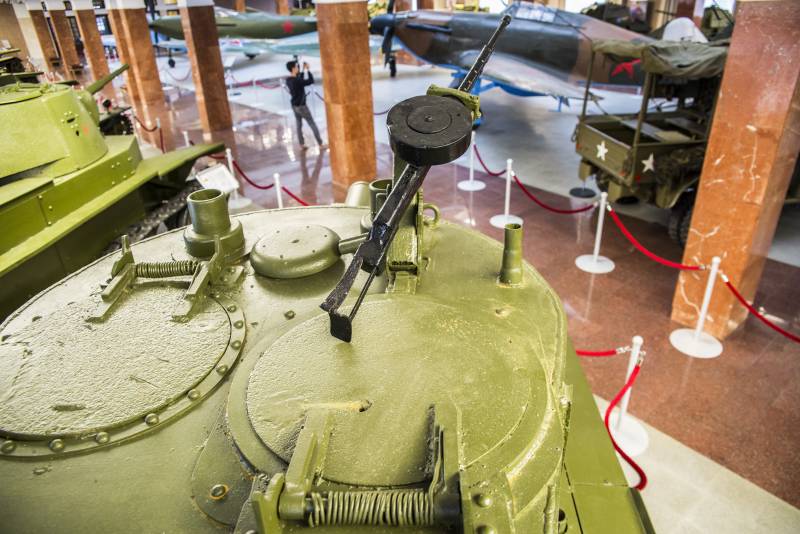 Cruising range on the highway:
on tracks 250 km
on wheels 500 km

Today, the BT-7A tank shown in the photo can be seen in the UMMC Military Equipment Museum in Verkhnyaya Pyshma.