Kiev closed the entry to Ukraine for Russian men

November 30, 2018
110
Ukrainian authorities impose a ban on entry into the territory of Ukraine of citizens of the Russian Federation, male, aged from 16 to 60 years. This was announced by the President of Ukraine Petro Poroshenko on his page on the social network on Twitter. 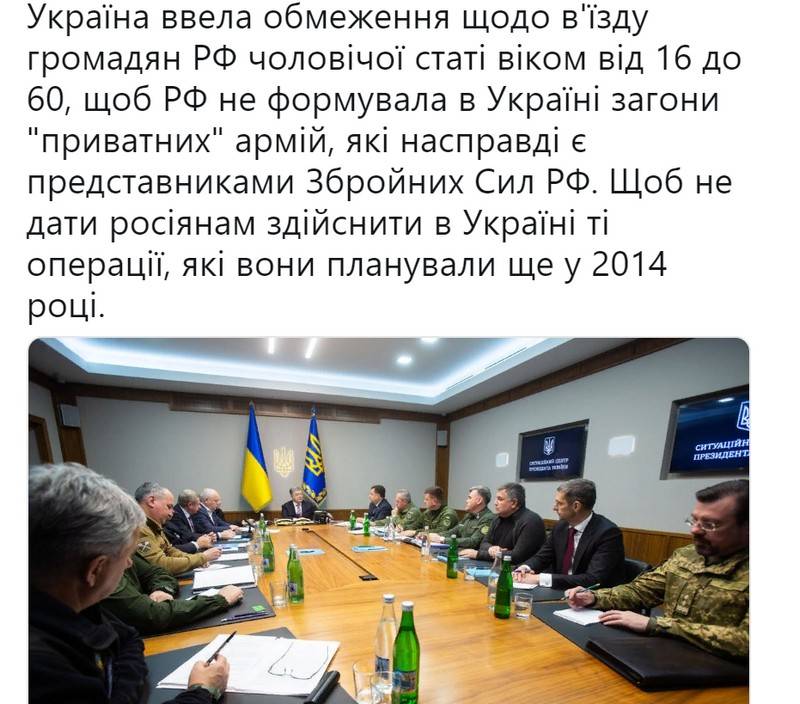 The ban on entry to Ukraine for Russian men has already been confirmed in the State Border Service of Ukraine. The head of the border department, Peter Tsigikal, said that from today, strengthened control measures are being introduced at border checkpoints. The entry of foreign citizens, primarily citizens of the Russian Federation, is restricted. Male citizens of Russia aged from 16 to 60 years are not allowed to enter Ukraine. The measure is introduced for the duration of martial law. At the same time, the border department clarified that the ban would not be applied in cases of "humanitarian trips", such as funerals or other events.

According to the Ukrainian president, the ban on Russian men entering Ukraine should prevent "the formation of private armies in the country".

Earlier, the State Border Service of Ukraine banned all foreign citizens from entering the Crimea from Ukrainian territory, while the ban on Ukrainian citizens does not apply.