December 11 2018
65
Is a situation of so-called “undercharging” possible when a soldier tries to charge a cartridge without opening the barrels? Theoretically, yes, but only theoretically. And then only on this "test sample". The fact is that on a real rifle it is quite possible to install some simple mechanical fuse that simply will not allow the cartridge to be inserted into the receiver if the barrels of the barrels are not open. But even on this sample, where there is no such a fuse, such “undercharging”, the situation when cartridges do not enter the trunks to the very end does not pose a danger. The fact is that the electronic control microchip will immediately determine that the charges are not in place, and “raise the alarm”, turn on the buzzer or give some noticeable signal. And the soldier, seeing his mistake, will be able to reload the rifle. That is, open the shutter, insert the second cartridge into the receiver and “push” the first cartridge with the second batch of charges until the very end.


Of course, creating layouts weapons at home, one might say, “on the knee”, it is simply impossible to avoid certain ... well, let's say this ... “nedodomok”. For example, in this photo you can see that a protruding plate with a disk is installed in front of the electronic unit. The same disc is also on the “mobile phone” cover. And if you look at the block itself, then ... it is not on it. So he should be on the opposite side ... but he is not there. Why? Yes, because both of these disks are magnets, and they are needed to fix the screen in the open state! Well, it is impossible to make a strong attachment from ordinary 2-3 mm of polystyrene, and, alas, the purchased hinges from the Leonardo shop turned out to be too ... "flimsy". Therefore, it was necessary to put at least one side of the "magnetic mount." On a real rifle of this level, naturally, will not be!

The trunks are designed to place three cartridges one by one, so that in this case nothing dangerous will happen.

Another advantage of this design is that the rifle will not need to be cleaned. That is, it will have to be cleaned, of course, but not in the way it is now. Since the powder soot is formed in it only in the trunks and on the closures, then they can be cleaned without the aid of a cleaning rod, and simply pour inwards some suitable cleaning agent. They poured, “poured” a little and leaked - that’s the whole cleaning! And all the mechanical parts of the mechanism of the rifle do not have to be cleaned. They are securely covered from dust. You will not need them and often lubricate. That is, sometime, of course, this will have to be done, but no more than twice a year - before the summer and before the winter, when the summer lubricant needs to be changed for the winter one and vice versa. That is, the easiest thing to do is to rifle ... periodically rinse, and you will no longer need to tinker with the ramrod, brushes and rubs. 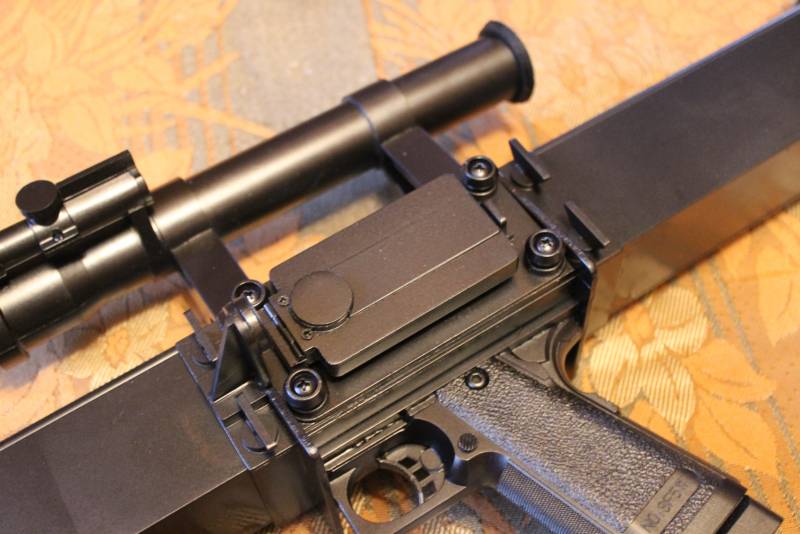 There she is, a loop for a brass box, visible between the lid and the base. But, alas, it turned out that these “crafts” do not differ in rigidity and strength. And to fasten something more durable, iron on thin polystyrene is at least unwise ... By the way, there is nothing only in this model: plastic pipes, and a handle from a children's gun (oh, I would be like this in my childhood !!!), and polystyrene knitting needles (swabs) bent over the candle. On the other hand, many details are very modernly made on a CNC machine!

As for problems with electronics or aiming systems - the same optical sight or video camera, then, since all its details are modular, they are easily replaced even in field conditions. And what exactly should be replaced, again, will prompt the screen control rifle.

Speaking of sights. There are no mechanical devices on this sample. But they are not on the English rifle SA-80. Rather, they are, but only mounted not on the body, but on the ... SUSAT telescopic sight. Note that it was SA-80 that became the first army rifle on which a permanent sniper scope was mounted. The abbreviation SUSAT stands for Sight Unit (“viewing unit”), Small Arms (“small caliber weapon”), Trilux (“illuminated“ trilux ”) - that is,“ sighting device for small-caliber weapons with illuminated “trilux”. This device has a fourfold magnification and is equipped with a rubber eyecup. Aiming, the shooter sees in the eyepiece the aiming mark in the form of a vertical arrow. It is black in the afternoon, but glows in conditions when the illumination is insufficient. Illumination provides a special built-in source with radioactive luminescence - the lamp "trilux". 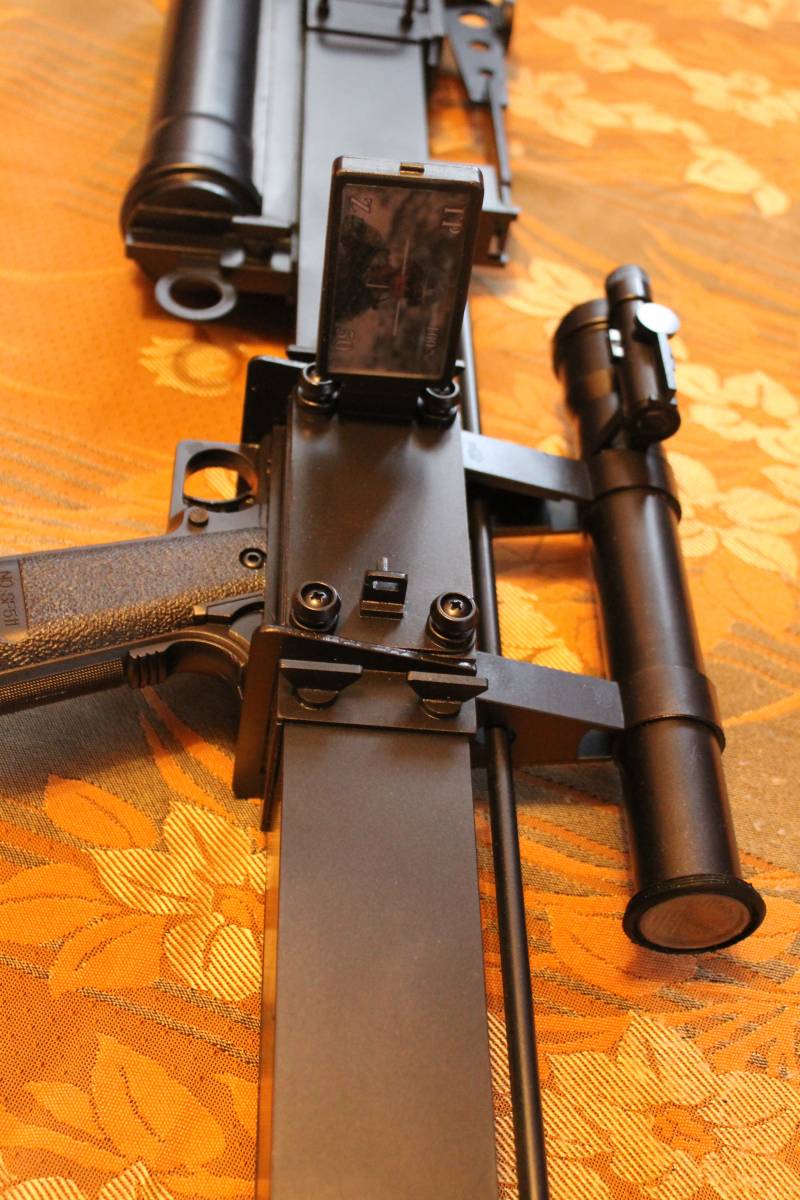 Thanks to this aim, it is possible to learn to shoot aptly much faster than on any other. Adjusting the sight is very simple. It is adjustable horizontally and vertically, in addition, it provides for the adjustment of the backlight level and ... everything! Well, and if in the battle it fails for some reason, then the simplest open sight is located on top of it in this case.

On this rifle, it can also be put on, say, on top of the same optical sight. However, the presence of a rifle control screen on a rifle is essentially an analogue of any modern camera, which allows the shooter to not even look at the optical sight on it. Even today, not every photographer is looking at the camera's viewfinder, preferring to observe the “picture” taken by him on her screen. 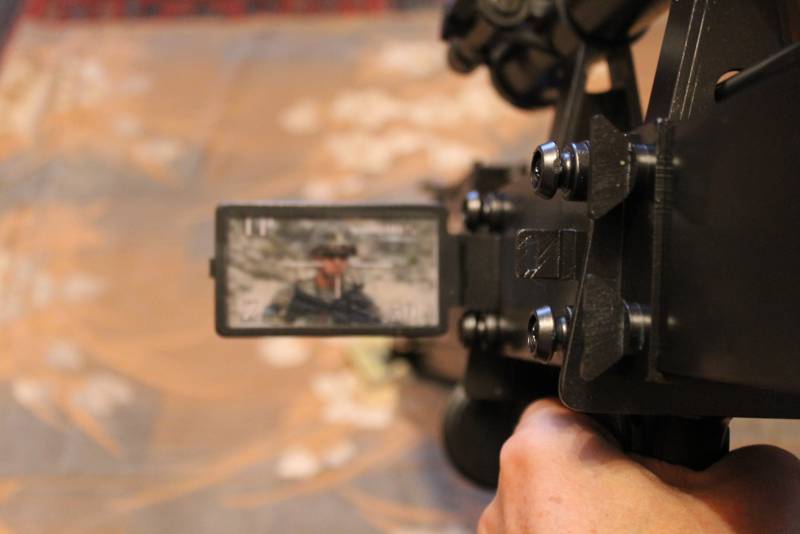 On the screen of the rifle, you see not one arrow, like the British, but three, but this is not important at all. With them, if the rifle is adjusted correctly, the bullet will hit exactly where the arrow points. In this case, it will be a point between the three arrows, that's all. The percentages of battery capacity are indicated in the upper right corner, and the ammunition load in the lower one. At the top left is a label - the letters "GR" - "grenade launcher". It is necessary to touch it, and the microchip will transfer the screen to firing from a grenade launcher and, accordingly, change the sight on it. Since the grenade fuse is programmable, the blast options will also appear on the screen. This is a “strike” and air blasting at a certain distance - 50, 100, 150, 200 m, etc. If the grenade is shrapnel, then the inscription “shrapnel” will appear on the screen and again the numbers of its explosion in the air - 25, 50, 75, 100, 125 m, etc. The letter "Z" means "Volley", that is, a simultaneous shot at once from all trunks. Such a shot can be used when firing at a group target at a great distance. 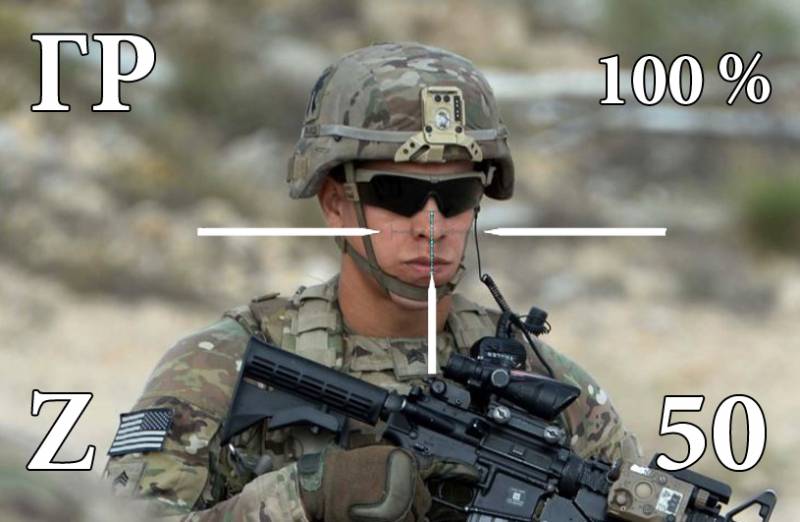 Here it is - a picture that the shooter from the ЭВШ-18 sees on the monitor of the electronic control unit of his rifle. Moreover, judging by the position of the sight marks, the bullet will hit this subject in a helmet right in the nose!

The aiming mark itself does not move across the screen, but the microchip, depending on the object on which the sight is focused, “chooses” from the barrels for a shot the one that is aimed at it most accurately. There is another option: all trunks are fixed in the body so that they look at one point at a distance, say, in 600 or 1000 m.

Since there is a video camera on the sight, the image from it and the sight is transmitted to the display of the unit commander. That is, he sees in real time what each of his fighters sees, who sees which of them chooses targets and, accordingly, sees which one of them is on the common map. Having at his disposal also a drone hovering over the battlefield, he can easily control everything that happens on him. To move a soldier like pawns, depending on the most optimal angles of the target and reciprocal fire assistance from the enemy forces. Even the corrections to the wind in the sights of the arrows, receiving data from his portable meteorological station, he can enter automatically and even without notifying them. However, a special computer, which constantly receives data from a weather station on air pressure, temperature, wind direction and force, can carry out a similar operation. Knowing the location of each of the unit’s fighters, he will be able to automatically give them optimal aiming data, so they will only have to point the cross at the target and pull the trigger. And to think about what kind of wind is blowing there and how much advance the soldier should take with such a rifle is not needed at all!

It is very convenient to have similar external accompaniment of information in cases when the soldiers are inside the armored vehicles. Now the loopholes on infantry fighting vehicles and armored personnel carriers are usually muffled and the infantry inside is not able to conduct a firefight. A pity, because it enhances the impact of the machine on the enemy. But having an external video camera (and not even one) and an onboard processor, it will be possible to give each fighter on the BMP its own “picture” of the desired target, and that one, even without looking at its own sight (and this makes it possible to reduce the dimensions of the loophole for the rifle barrel!) , to conduct a successful fire from the car.

There is no need to have an IR sight on each rifle. A few night-time devices on the BMP or BTR, connected to the on-board computer, are enough to transfer the “picture” to the control units of the soldiers inside them and thus ensure that they can fire with an accuracy unattainable by means of IR detection. These are the advantages that the electronic control of such a rifle can give. 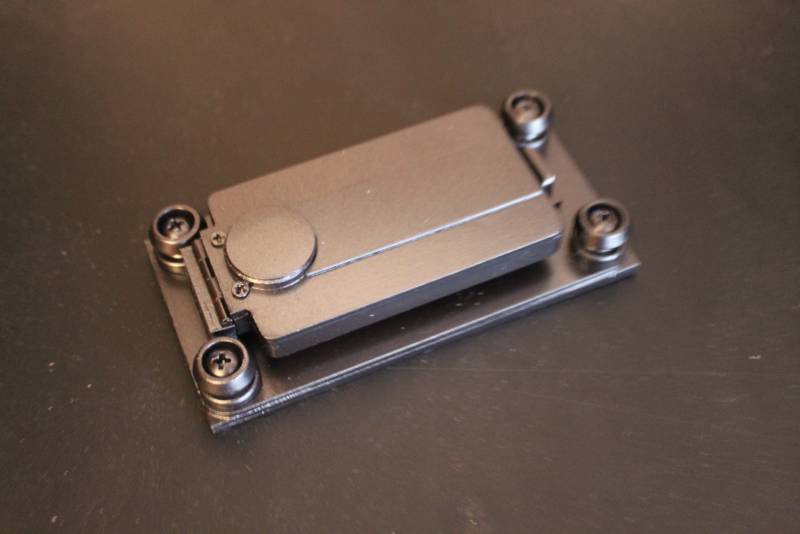 The spare electronic unit can be stored in a completely sealed metal package.

True, there remains the problem of the impact of EMP - the electromagnetic pulse of a nuclear explosion. The consequences of its impact can indeed be very serious. For example, it seems that it is known that an explosion at an altitude of 300 km of just one ammunition with a capacity of 10 Mt will disrupt the operation of electronic equipment in an area equal to approximately the entire territory of the United States, and the time for its restoration will exceed all the permissible periods for the adoption of any response measures. Therefore, wherever there is electronics, and not electrovacuum devices - these are not too susceptible to EMP (well, who would have thought ?!), and semiconductor, they try to provide it with appropriate protection. However, there are much more electronics on ships, but they are being built, a lot of it on tanks and on other military equipment, which no one refuses. So the electronics may well be on the rifle. Well, as far as protection against EMP is concerned, the best means of protection against it would be ... a spare electronic unit placed in a package of fine copper wire sewn into a leather case. By the way, the same mesh will need to be inserted into the plastic of the rifle body in the area of ​​the microwave emitter inside the barrel block connected to the control unit on the body. After all, each warhead is set on fire in the table by a signal received from the electronic control system through a touch trigger. For this, “devices” are needed that can work without batteries solely due to the energy transmitted to them through radiation.