November 30, 2018
160
The concept of a new class of armored vehicles - support combat vehicles tanks (BMPT) has been discussed since the beginning of the 90s, and so far they have not come to a common denominator. In the late 90's, it is not clear for what reasons, two prototype BMPT Terminator prototypes were developed and manufactured, which were presented as a qualitative leap in the development of armored vehicles. For almost twenty years, they were regularly shown at various exhibitions, but were not in demand in the Russian army. They did not find a customer abroad either. 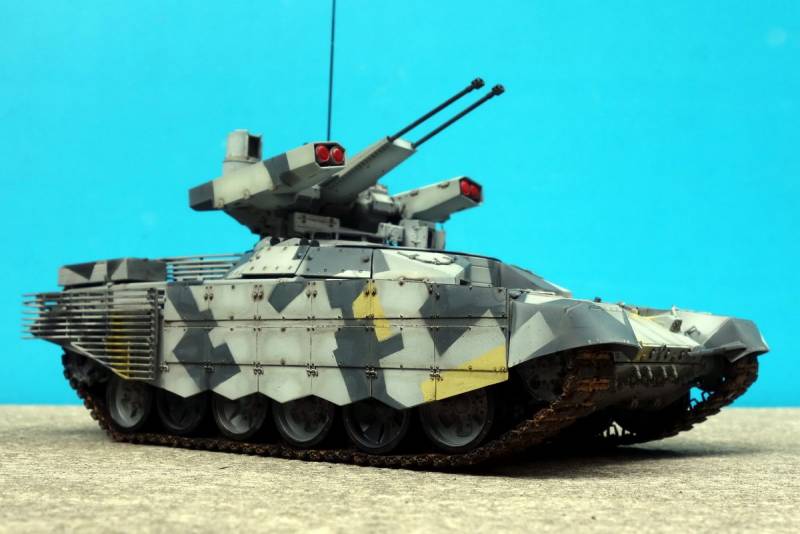 After checking these machines in real combat conditions in 2017, in Syria, the controversy around BMPT flared up with a new force, the emphasis shifted, it turned out that for such machines there is a completely different scope.

When developing the concept of BMPT, everything was turned upside down. First, they developed and manufactured prototypes of the Terminator BMPT, and then began to substantiate the need for such machines and justify the tactics of their use.

As a result, we came to the conclusion that this machine is necessary for fire support of tanks from anti-tank melee weapons at a distance of hundreds of meters, the most dangerous of them are ATGW and RPGs that are difficult to detect from a tank. Then, it is not clear by what logic, they added the fight against light-armored equipment, which tries to keep the tanks as far as possible, since the hitting of a shell of a tank gun or rocket blows the light-armored equipment to shreds. That is, tanks already have an effective means of dealing with lightly armored targets, and BMPT is not really needed for this.

В article Arguments are given about which weapons are most appropriate to use on BMPTs. Of course, you can talk about the armament of this machine, but the main question behind it remains: why do we need BMPTs, what tasks should it solve and what is the tactics of its use.

If for the near-range distance the most tank-dangerous targets are RPG and ATGM calculations, then the BMPT should have better than the tank’s instruments and means for detecting small-sized tank-hazard targets, have effective weapon for their quick destruction and more powerful protection against melee weapons in comparison with a tank.

What of this set is implemented on BMPT? Of the target detection tools, only a set of standard tank sights and observation devices that did not bring anything new to the process of searching and hitting targets.

For the destruction of targets, two small-caliber 30-mm guns and a tank 7,62-mm machine gun are used. The installation of guided missiles also looks frivolous: they are not needed to defeat small targets, this class of weapons is intended to defeat well-armored vehicles at long distances and protected firing points and strong points. Some samples used automatic grenade launchers, then they were removed. The calculations of the anti-tank missile systems and RPGs for the destruction of tanks should see their target and direct a rocket at it, so they cannot be behind obstacles. Installing a grenade launcher, designed to "throw" mines for obstacles, to destroy such targets is really not needed. To reduce the weight and the amount of the booked space at the BMPT, the tank gun was removed, which weakened its firepower.

That is, the BMPT firepower is significantly lower than the tank. The advantage is only in the use of two 30-mm guns. The tank is even better equipped with small arms, it has two machine guns. One of them is large and with a significantly higher elevation angle. The controlled weaponry tank many times exceeds the BMPT, it does not have four missiles in the strike, the entire ammunition load can contain 22 guided missiles in the automatic loader.

As a result, in fire power, BMPT is significantly inferior to a tank in artillery armament (no tank gun), in small arms, guided armament and surpasses only in small-caliber artillery armament. In principle, the installation work on the tank 23-mm and 30-mm guns have already been carried out, and this task can be solved without any problems on the tank, for this purpose it is not necessary to develop BMPT.

The task of providing BMPT with more powerful protection compared to a tank is also not solved, since the hull of the T-72 tank was taken as the base of the BMPT. Her defense is somewhat enhanced, but there is nothing fundamentally new.

According to the complex of tasks facing the BMPT, it can be concluded that the task of finding and detecting targets of BMPT is solved at the tank level and does not exceed it, the BMPT is significantly inferior to the tank in providing firepower, the advantage only in small-caliber artillery tank.

It should also be noted that the tactics of using BMPT on the battlefield, on the basis of their equipment and tasks, have not been worked out at all. In which tactical level of tank forces and in whose subordination should they be, in what battle formations should they be (in front of tanks, as part of a tank unit or behind tanks)? ..

All these problems, apparently, and determined the thorny path of moving this machine to the troops. The use of BMPT for fire support of tanks in the form in which it was created, does little. If such a task stands, then it should be solved with a different approach to equipping and using armored vehicles.

The use of this machine in a real combat situation in Syria showed that this machine is needed, but absolutely for other tasks. It turned out that it is necessary as an infantry fire support machine in confrontation with the enemy, unable to massively use armored vehicles, and in urban areas. In such battles, the main targets are enemy infantry with small arms, MANPADS and RPG operators, light armored vehicles, artillery and rocket launchers, and firing points at short distances.

To solve such problems, the machine must be equipped with small-arms and small-caliber artillery weapons to suppress infantry and lightly armored targets, light grenade launchers to hit targets behind obstacles, and rocket weapons to pinpoint artillery and rocket launchers and strong points.

Different types of weapons must be untied from each other vertically and horizon and be able to conduct simultaneous fire in different directions, since the machine can be suddenly attacked from any direction. Rifle armament must have elevation angles of at least 75 degrees (45 degrees are few) for firing at the upper floors of buildings, as was the case when the “Cliff” anti-aircraft machine gun was installed on the tank.

The machine needs "eyes" for reconnaissance of the terrain and identifying targets, and for this the UAV is most acceptable, driven by an individual crew member. The machine must have a powerful comprehensive protection against the most likely means of destruction (RPG and ATGW), especially from attacks from above. To solve the tasks assigned to the vehicle, the crew must be at least four people.

From the point of view of tactics of using an infantry fire support vehicle, it should be in the combat formations of the tactical level, the company - the battalion, subordinate to the commanders of this level.

The expediency of creating such a machine is obvious, the Syrian events only confirmed this. Such a machine is necessary for use in local conflicts of low intensity and police operations, which are now the majority.

Apparently, BMPT can also find its place in the army structures. Before starting the development of such a machine, it is necessary, taking into account the experience gained in creating the Terminator BMPT and its testing in combat conditions in Syria, to determine the tasks facing it, the tactics of its use, the requirements for the weapons complex and the defense system, and only then decide on creating such armored vehicles.