November 29 2018
39
The Swiss newspaper Neue Zürcher Zeitung wondered why Russia prints money for Libyan field marshal Khalifa Haftar. A newspaper columnist, someone Ulrich Schmid, writes that over the past three years, Haftar has received from Russia at least 9,7 billion Libyan dinars, which are printed by the corresponding enterprise on the order of the field marshal. The money allegedly printed in far away Russia is then brought to Cyrenaica - Eastern Libya, which is controlled by Field Marshal Haftar.


It would seem, what's the difference to the Western press, what and where one of the rulers of Libya prints, after the overthrow of Muammar Gaddafi actually ceased to exist as a single state. After all, in the end, any state entity should have its own currency and if at the moment there are no technical and organizational possibilities to print it on its territory, then you can turn to other states for help. The United States and European countries supply military ammunition to Ukraine or Georgia - and nothing, no one asks any questions. 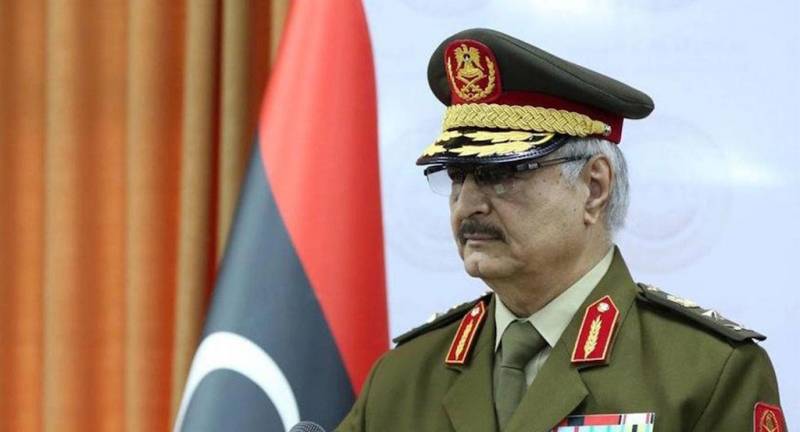 But Western interest in Khalifa Haftar does not subside. However, at first, eight years ago, this was a very positive interest. Khalifa Belkasim Haftar was not yet a field marshal, but he had long worn general's shoulder straps. He is almost the same age as Muammar Gaddafi, was born in 1943 year in Ajdabiya, the ancient capital of Cyrenaica, in a family of immigrants from the Al-Farjani tribe. Choosing a military career, Haftar 26, a junior officer, participated in the military coup of “free officers” in 1969, which resulted in Muammar Gaddafi taking power.

After this, the career of one of the closest associates of the leader of the Libyan revolution went uphill. Haftar was rapidly growing in positions and ranks, however, it was for what he was awarded — in 1973, Haftar commanded the Libyan units who fought on the side of Egypt in Sinai. In 1977-1978 Hoftar studied in the USSR at the Higher Officer Courses "Shot", and in 1983, he graduated from the courses at the Military Academy named after Mv Frunze. While studying in the Soviet Union, Haftar learned Russian. 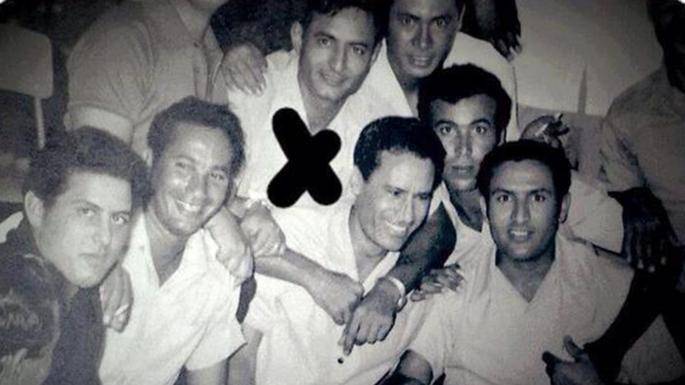 Gaddafi trusted Haftar as a member of the Revolutionary Command Council and a participant in the 1969 revolution of the year. So when, in 1987, the Jamahiriya launched a war in neighboring Chad, Colonel Khalifa Haftar was appointed commander-in-chief of Libyan troops in Chad. But, despite the apparent technical superiority of the Libyan army over the armed forces of Chad, the situation at the front was not in favor of the Libyans. Ultimately, the Chadian army utterly defeated the Libyan expeditionary forces. The ratio of those killed in the Toyota War, as the conflict in the foreign press was christened, was 7500 people from Libya and about 1000 people from Chad. Another 400 Libyan troops were captured. Colonel Khalifa Haftar himself was in the hands of the Chadian army.

Since the invasion of Chad was an undercover operation by the Libyan army, Muammar Gaddafi instantly renounced all prisoners - the Libyan ichthamnets. Colonel Haftar, Gaddafi's ally in the military coup and his disciple, who had previously been attentive to all the ideas of the Libyan leader, was furious. He broke all ties with Gaddafi and since then began to prepare a coup d'état in Libya. Thus, in a quarrel with Gaddafi Haftar was from the end of 1980-s.

Trying to overthrow Gaddafi, Haftar contacted the Libyan opposition and in the 1988 year began to cooperate with the National Libyan Salvation Front, which was based in the same Chad. After the anti-Caddaphist turnaround, the Chadian authorities released Haftar from prison and he freely settled in Chad, planning an invasion of Libya. But Gaddafi still managed to organize a military coup in Chad and overthrow the pro-American President Hissen Habr. Then the CIA organized the evacuation of Haftar and his 350 comrades from Chad to Zaire, and then to Kenya and then to the United States. It is clear that at this time, Haftar maintained close ties with American intelligence, as he was interested in Washington in the context of the confrontation of Muammar Gaddafi. In 1990-s, Haftar was granted US citizenship, after which he settled in Vienne, Virginia, and lived there for twenty years.

Sometimes in the life of a Libyan political émigré, generally calm and measured, there were surges of military-political activity. Thus, in 1996, Haftar attempted to organize an armed uprising against Gaddafi in the mountainous region of southern Libya. However, Gaddafi easily suppressed this rebellion, and the Libyan authorities managed to arrest and execute many supporters of Haftar. But over the years, Gaddafi himself changed his policy. Frightened by the tragic end of Saddam Hussein and what the Americans did to Iraq, Gaddafi went to a rapprochement with the West. He abandoned the former radical rhetoric, announced the termination of the program to develop nuclear weapons, became increasingly to meet with Western leaders. It seems that it was pointless to overthrow Gaddafi, so the Americans lost their interest in the anti-Caddaph opposition and, in particular, Khalifa Haftar himself.

But when in the countries of North Africa and the Middle East, 2011 began popular popular demonstrations, dubbed the "Arab Spring", the Americans "pulled out of the casket" all opposition political figures, including Khalifa Haftar. An elderly general arrived at his homeland. He settled in Benghazi and joined the armed forces of the opposition. At that time, they were commanded by General Abdul Fatah Yunis, a former second man in the Libyan Jamahiriya and her interior minister, who went over to the opposition. Khalifa Haftar became commander of ground forces with the rank of lieutenant general. 14 February 2014, Haftar, speaking on national television, announced the dissolution of parliament. At the same time, he began driving around the areas where he had influence, and gathering people into his own armed forces. 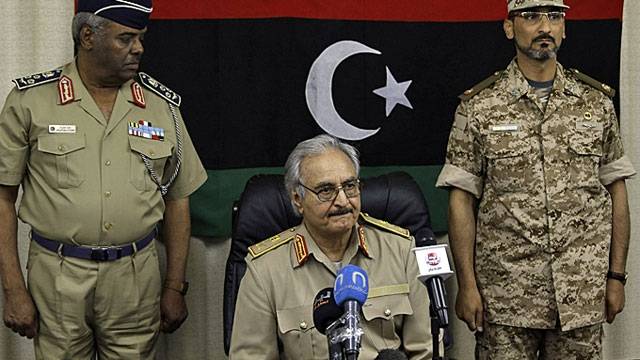 By this time, Libya had actually disintegrated into several warring and warring territories. Khalifa Haftar became the supreme commander of the Libyan Armed Forces - in fact the army of one of these territories. 15 September 2016 was awarded the title of Field Marshal to Khalifa Haftar by the House of Representatives in Tobruk. Around the same time, in the summer of 2016, Haftar visited Russia for the first time in the last decades.

Since in a rapidly changing political situation in Libya, it was necessary to find the forces that would be possible and beneficial for Russia to cooperate with, the leadership of our country chose to establish contacts with Field Marshal Haftar. He is a man of secular culture, one of the last living Arab secular nationalist revolutionaries of the second half of the twentieth century, who studied in the Soviet Union, seemed a much more acceptable figure for the development of partnerships than pro-Western liberals or, especially, frostbitten radicals. 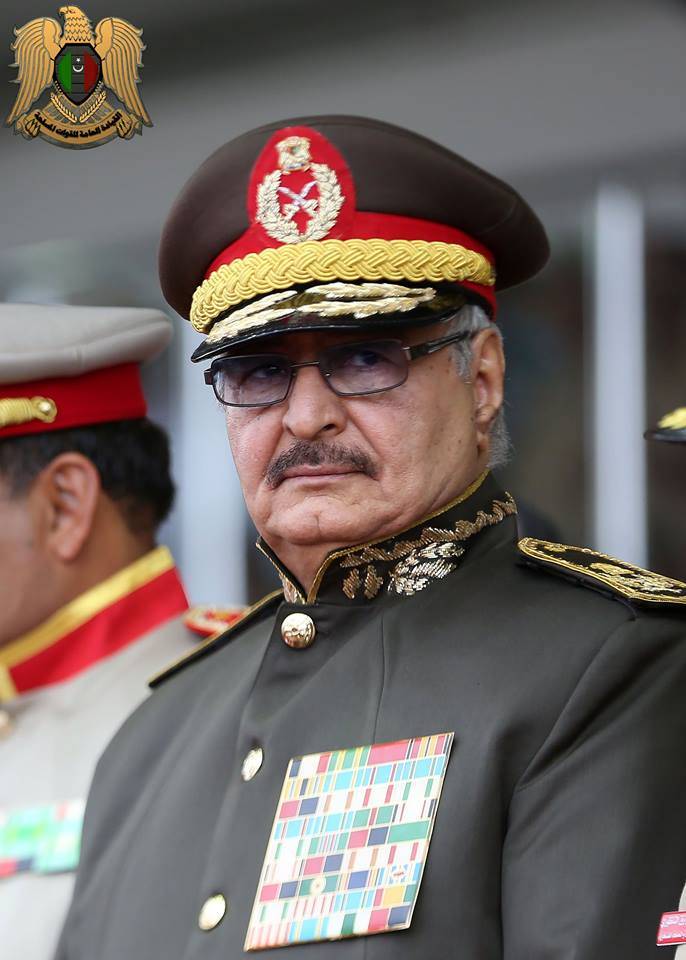 One of the serious problems is only the age of Khalifa Haftar. He is seventy-five years old and, according to publications in a number of Western publications, the field marshal has been ill with cancer for a long time, so that his departure from our mortal world can come almost at any time. But while Haftar is alive and not going to die, he is in contact with Russia more and more closely.

In Russia, Haftar is viewed as a person capable of leading a real struggle against radical terrorist groups operating in Libya. But for this, Haftar needs money, weapons, organizational support. Therefore, the Libyan Field Marshal and often in Russia. 12 – 13 November in the Italian city of Palermo held an international conference on the settlement in Libya. The Libyan side was represented by a delegation of the Government of National Unity (PNU), which is based in the capital, Tripoli, and is supported by the West and the UN Security Council.

But the trouble of the PNU is that it has not been able to cope with terrorists for years, demonstrating complete political impotence. Naturally, in such a situation, the figure of Haftar is of increasing interest. Therefore, when the field marshal also privately arrived in Palermo, representatives of many countries, including those who support the PNU, immediately began to conduct backstage talks with him. Offended delegates of Tripoli in a hurry left the conference.

Analysts say the outcome of the conference in Palermo is the victory of France, which, along with Egypt and the United Arab Emirates, supports Haftar. By the way, the field marshal made a real demarche, refusing to sit at the same table with the delegation of Qatar, supporting the NUP, and accusing the Qatari people of being al-Qaeda (banned in the Russian Federation).

Russia, by the way, has never officially made a choice in favor of Khalifa Haftar. Unlike Egypt and the United Arab Emirates, directly supporting the field marshal, and Qatar and Turkey, who are in favor of the PNU, Russia tries to evenly perceive all Libyan governments, with the exception of radical groups. But if we talk about military cooperation, here the choice has long been made in favor of the field marshal. This is evidenced by his frequent visits to Russia and meetings with representatives of the leadership of the Ministry of Defense of the Russian Federation. 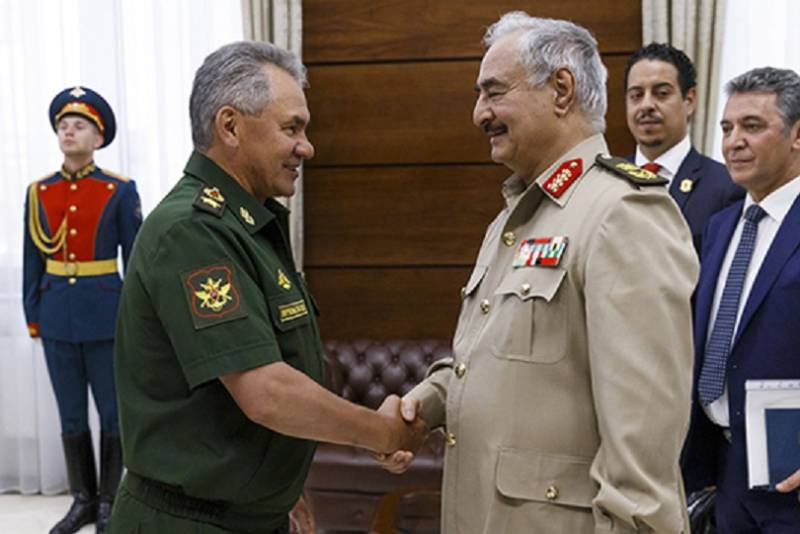 The Western press, however, and this finds its explanation. And here we return to the question asked by the Swiss newspaper, trying to understand why Russia allegedly prints money for the needs of the House of Representatives in Tobruk and the field marshal Khalifa Haftar supported by it. Schmid, a Swiss journalist, concludes that Russia allegedly pays Haftar to open her military base on Libyan territory.

The topic of the Russian military presence in Libya in general is very frightening for the West. Although there is no reason to believe that Russian servicemen are present in Libya, the Western press is competing in stories about the presence of Wagner PMCs in Libyan territory, about the Russian special forces being deployed to Libya, anti-aircraft missile systems, and the alleged agreements between Sergei Shoigu and Khalifa Haftarom uschet the creation in Benghazi of the Russian naval base and so on.

The most complex British are - historical opponents of Russia in the Mediterranean Sea. When British military leaders say that there is a threat from Russia, they inevitably start talking about the fact that after Syria, Russia supposedly will come to Libya and will restore its order here in order to seize Libyan oil. Confronting Russian troops landed in Libya is one of the favorite scenarios of British military exercises recently.

Abdullah Al-Sharif of the Arab media center Al Araby Al Jadeed, headquartered in London, reports that Khalifa Haftar specifically closed the port of Tobruk in order to prepare it for the deployment of a Russian military base. The establishment of a base in Tobruk is allegedly said that the port is very close to Egypt, which is currently the most important military-political partner of Russia in North Africa. Of course, there is no evidence for such assertions, but the Western public readily believes.

The Arab analyst is echoed by the Washington Times (WT), citing data from US intelligence agencies. Russia's sympathies for the House of Representatives in Tobruk and the Libyan National Army, commanded by Haftar, are also related to the fact that the forces controlling Eastern Libya sharply criticize the West. Thus, the Prime Minister of the "Tobrukov" government of Libya, Abdullah al-Tini, called the United States, Britain and Italy enemies of Libya and the Libyan people, because they support religious and political groups.

Thus, if it is worth supporting someone in modern Libyan politics, then Khalifa Haftar is almost the only acceptable figure. At least, he is really trying to resist the further archaization of what remains of Libyan society, intends to destroy the radical groups operating in the country and contributing to the ever-greater immersion of the once successful state into the abyss of the Middle Ages. Therefore, if Haftar needs to print his dinars in Russia, according to the Western media, what is so bad for us and our country?