Meet the "Package": the newest weapons for hunting submarines and torpedoes

November 28, 2018
57
New types of Russian weapons of various kinds, including systems for naval ships fleetregularly attract the attention of the foreign press. Some samples that have certain advantages are praised by foreign authors. For example, the other day, the American publication The National Interest noted the high characteristics and uniqueness of the Russian Ship-NK anti-submarine complex.


An article about the Russian ship arms, 24 was released in November under the heading The Buzz. Author Mark Episkopos gave his publication a noticeable title: “Meet the Paket: The Russian Navy’s Latest Weapon (To Hunt Submarines and Torpedoes)” - “Meet the“ Package ”: the latest weaponry of the Russian fleet (to hunt submarines and torpedoes).” Directly under the heading, the author gave a brief information about the composition of the complex: the “Package-NK” includes a central control system, a hydroacoustic station for searching targets, as well as a launcher with MTT and M-15 torpedoes. 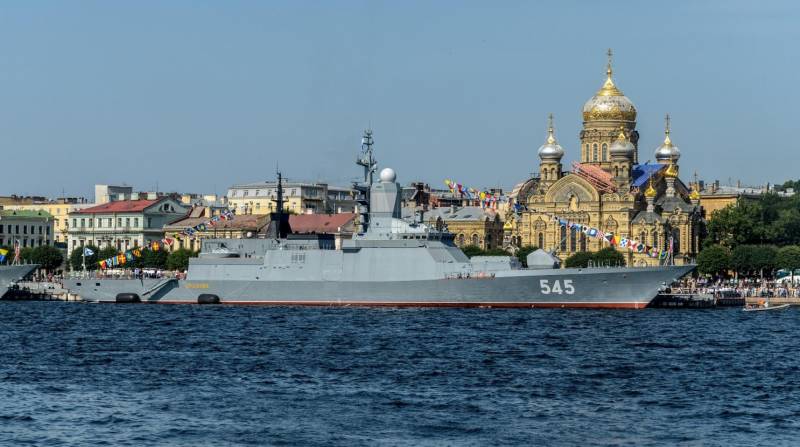 The author points to recent events. Against the background of the aggravation of military tension between NATO and Russia, the Ministry of Defense of the latter is developing its navy. Referring to the message of the Russian military department from October 30, M. Episcopos writes that one of the Russian 20380 corvettes (Steregushchiy-class) in the framework of future exercises in the Baltic Sea was to use the newest anti-submarine / anti-torpedo complex “Package-NK”.

We are talking about the ship "Boky". This is the third corvette of the 20380 / Steregushchiy-class project, introduced into the Russian fleet. Before him, the composition of the Navy joined the ships "guarding" and "savvy". In total, before the 2021 of the year, the Russian command intends to build and take on the service of 13 ships of this type.

The author notes that there is nothing surprising in replacing the outdated Grisha-class corvettes (small anti-submarine ships of the 1124 "Albatross" project) built since the seventies of the last century. However, in this shipbuilding program there is a component that can cause concern to foreign experts. This is the speed of equipping the new corvettes with the formidable anti-submarine and anti-torpedo complex “Package-E” or “Package-NK”.

The package complex is a weapon system for surface ships consisting of several components. It includes a central control system, sonar sonar station for detecting underwater targets, as well as a launcher. The latter is able to use torpedoes of various types. The MTT product is designed to attack enemy submarines, and the M-15 torpedo is different in its design and is necessary for the attack of approaching torpedoes. Torpedoes MTT and M-15 have the same dimensions, which allows you to combine them in the ammunition in the required proportions. The range of anti-submarine torpedo reaches 10000 m, anti-torpedo - from 100 to 800 m.

The author recalls the statements about the “Package-NK” system, previously published by official sources. The Russian organization Rosoboronexport claims that after the installation of the Package-NK complex, the effectiveness of the anti-torpedo protection of a surface ship increases 3-3,5 times. The cost of a full set of funds remains unknown, but Rosoboronexport is ready to sell new complexes to foreign customers. Obvious readiness for export can be an additional advantage when negotiating with customers.

First of all, in the “Package-NK” project, major changes are foreseen in comparison with the old rocket bomb missiles of the RBU family. In addition, there is a more important advantage in the form of a modular architecture. Thus, the individual components of the complex can be upgraded independently without the need for a comprehensive processing of all funds. M. Episcopos notes that an interesting pun is observed here: a complex with such capabilities was called the word “Package”, which can also mean a set or a bundle.

Having considered the general features of the package-NK complex, the author proposes to compare it with foreign systems of a similar purpose. He notes that the complex is universal; He is able to solve the tasks of protecting the ship and attacking targets. Systems with such capabilities in foreign countries are absent. At the same time there are similar concepts and complexes built on their basis.

First of all, the Surface Ship Torpedo Defense complex, which is in service with the US Navy, is mentioned. The SSTD complex can be considered the closest analogue of the “Package-NK”. It includes acoustic means of observation and detection, as well as instruments for transmitting data to the Countermeasure Anti-Torpedo anti-submarine missile system. However, SSTD does not include the launcher itself and the missiles.

For the naval forces of India, the Mareech Advanced Torpedo Defense System (Mareech ATDS) anti-torpedo defense complex was developed. This complex has its own means of detecting torpedoes, as well as "indirect" systems to counter attack. The destruction of the approaching torpedoes with special weapons is not provided. German industry has developed the SeaSpider Anti-Torpedo Torpedo anti-torpedo complex. Its main element was a special interceptor torpedo with improved homing tools, compatible with a wide range of torpedo tubes. However, in 2016, the SeaSpider project faced serious technical problems. Now the engineers are reworking the project with the problems identified.

At the moment, as the author recalls, all five 20380 project corvettes in the Russian Navy are equipped with the Package-NK complex. Perhaps, the Russian industry will sell these complexes to foreign countries, but to whom and when they will be given weapons is unknown. In addition, Russian specialists can focus on the development of their fleet. In this case, the Package-NK complexes will first equip all the remaining Steregushchiy-class corvettes, and only then will export contracts be signed. It is assumed that the anti-submarine / anti-torpedo complex can be used on ships of various types, including frigates and aircraft carriers. However, the future plans of the Russian command, providing for the installation of "Packages" not only on corvettes of 20380 Ave., have not yet been announced.

The author calls for now not to make far-reaching conclusions and not to consider the “Package-NK” complex as the only prospective weapon of its class, which will be associated with the further development of the fleet. So, last year, Rostec Corporation announced its plans to modernize one of the existing anti-submarine systems. The RPK-8 "Zapad" complex with the anti-submarine missile 90Р1 will undergo an update. Despite this, it is obvious that the Russian Navy is considering the Package as a good platform suitable for future use.

Anti-submarine / anti-torpedo complex "Package-NK" is an effective and universal weapon system. M. Episcopos notes that the multifunctional launcher of this complex blurs the line between defensive and strike weapons. And all this is happening against the background of the exercises of the Russian fleet and accompanies the general buildup of the military presence of NATO and Russia in the Baltic Sea.

The project of the universal ship complex “Package-NK” was created at the beginning of the two thousandth by order of the Russian Navy. The lead developer of the project was GNPP Region. During the development of individual components, other organizations were involved in the project. In particular, the M-15 torpedo was created with the participation of the Research Institute of Marine Technology from the “Gidropribor” concern. Design work was completed in the middle of the last decade.

The individual components of the promising complex were openly demonstrated at trade shows from 2007. So, the first showed a torpedo M-15, designed to prevent torpedo attacks. Two years later, the first demonstration of an MTT product, an anti-submarine torpedo, took place. At the same time, the tests of the complex started before the first shows of its components. The first carrier of the "Package-NK", performing the functions of a trial ship, was the corvette "Guarding" - the lead ship of the 20380 project. The tests ended in 2008, and soon the Package-NK complex was put into service.

The complex includes several fixed assets. On the carrier ship, the Packet-E control system, the Packet-AE hydro-acoustic target designation station and the torpedo device, type CM-588, are mounted. Antenna device products "Package-AE" is located in the underwater part of the ship, the launcher - above the water level. Two types of torpedoes are used to hit different types of targets - anti-submarine MTT and anti-torpedo M-15. Torpedoes have a caliber 324 mm and use a common launcher.

The complex "Package-NK" works in automatic mode. The hydroacoustic station monitors underwater conditions and searches for targets. When an underwater object is detected, the control system processes the incoming data and, by characteristic features, determines the class of the target - a submarine or a torpedo. Further, these data are used to prepare the shooting of the relevant ammunition.

The defeat of submarines is made with the help of MTT “Compact heat torpedo”. This product is 324 mm caliber and 3,2 m long has a two-way acoustic homing system. It achieves speeds up to 50 nodes and plunges to a depth of 600 meters. The maximum cruising range is 20 km. With a mass of 390 kg, the torpedo carries a charge of weight 60 kg. A torpedo is fired from a 324-mm torpedo tube using a powder pressure accumulator.

The M-15 torpedo, designed to hit approaching torpedoes, looks similar to an MTT product, but differs in its design and characteristics. Instead of a heat engine, it uses a reactive solid-fuel jet. The torpedo has an inertial control system and a hydroacoustic guidance head. Destruction of targets at depths up to 800 m is provided. The maximum firing range of such a torpedo is 1400 m.

The main carriers of the anti-submarine / anti-torpedo complex “Package-NK” in the Russian Navy are small guard ships (corvettes) of the 20380 project. Now in the fleet there are five such ships; expected completion and delivery of another five. The complex is retained on two modernized corvettes of the 20385 Ave. The construction of the lead ship of the 20386 pr. Is also under construction, which will also receive the “Package-NK”. The fleet will order at least a dozen of such ships. The Package-NK complex is also used on the 22350 frigates. The lead ship of this type began service, three more are at manufacturing plants. Later, four new frigates are expected.

All the ships listed receive a complex with two launchers. In lazportah in the surface of the ship carrier is installed unified quad torpedo tubes. At the same time, the “Package-NK” project provides for the possibility of reducing or increasing the ready-to-use ammunition set by appropriate restructuring of the launcher.

The Package-NK complex is the newest domestic development in its class and ensures the protection of surface ships against two main threats. The complex works automatically and is able to respond to emerging threats in a timely manner. In terms of its composition and capabilities, as The National Interest rightly points out, the Package-NK complex has no direct competitors.