How Kuban glad ships from the bottom "raised"

November 28, 2018
55
It is no secret to the fact of the existence of a funny quasi-state on the territory of the modern Krasnodar Territory and Adygea during the Civil War in the form of the Kuban People's Republic (PRC). But, despite the nonsense of the fugitive founders and apologists of this education who settled in North America, this republic was more than nominally “popular”.


The Kuban Council was originally a kind of political party that opposed the October Revolution. Therefore, in September, 1917, in a narrow circle of exclusively “their” comrades, decided to create the Kuban legislative council. Members of this particular “parliament” were appointed from their own membership. Instantly announced the creation of the Kuban Territory, elected chieftain, and in January 1918-th declared independence of the Kuban. The core of the “parliament” pushing such a policy was the so-called “independent supporters” or Ukrainophiles (descendants of Zaporizhzhya Cossacks). For example, such as Nikolai Ryabovol, who was subsequently killed at a hotel in Rostov-on-Don. These individuals simply could not help repeating the fate of short-sighted peasant nationalists from Ukraine (both of that period and the modern period). 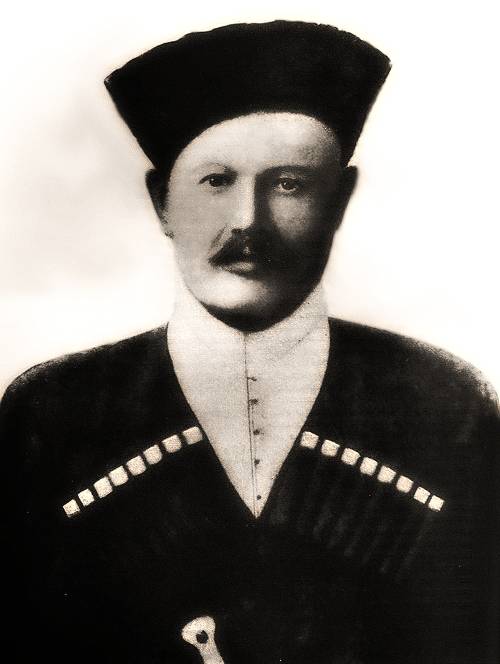 As if the threat from the red was not enough for them, the new authorities of the Kuban for the beginning sowed discord among the Cossacks themselves. For example, the faction of the “Lineans” (the linear Cossacks, whose descendants came from the Don) immediately put a similar policy in the camp of enemies, since Linear advocated a united and indivisible Russia and advocated only the expansion of the rights to self-government.

The so-called “nonresident” peasants who had recently settled in the Kuban, and according to the Hamburg bill, all of the “non-Cossack family” were completely deprived of the right to vote. But the “independentists” were completely forgotten about the proletariat. Of course, the Kuban still remained a strong agricultural region, but on the Black Sea coast, where port cities were actively developing, a powerful proletarian class was forged, which had already proved its weight in the 1905 year by announcing the creation of the Novorossiysk Republic. At that time, in the captured factories of the city, the Novorossiysk workers even created weapon for combat troops of the republic. Also, the proletariat and the “nonresident” in the large regional centers were almost the majority.

Having taken a course on “Ukrainization” (“independent protesters” wanted to translate all educational institutions of Kuban into Ukrainian) in domestic and foreign policy, the latter-day was glad to do everything so that Frankenstein, who had not yet been assembled, was disassembled in parts. The “government” artificially transferred a huge part of the population, if not to the side of the Reds, then to the category of opponents for sure. The question of creating "red" troops from among the inhabitants of Kuban was not in principle. Even many Cossacks already then sensed such “politicians” too “Zaporizhia” stench.

At the beginning of the same 1918, the formation of the Red Guard detachments of Kuban started. They were assisted by units of the 39 Infantry Division, which was part of the 1 Caucasian Army Corps. Back in 1917, the division’s soldiers received news of the brutal oppression of the peasants of the North Caucasus and the Kuban by the Cossacks. The Bolsheviks also contributed to the agitation among the divisions. 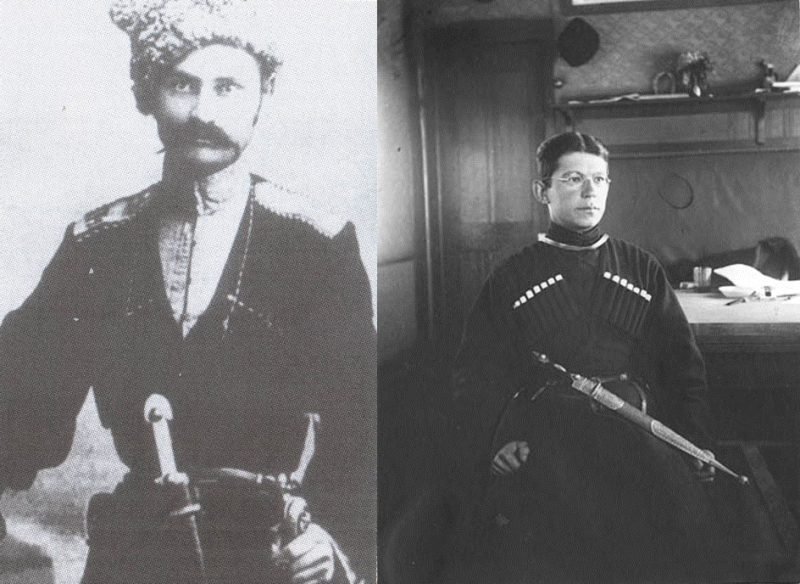 Sorokin and Avtonomov (from left to right)

One way or another, the troops marched to Ekaterinodar (Krasnodar), where the Rada abolished itself, and they literally threw Ukrainophiles out of the capital almost without a fight. By the way, Ivan Sorokin (a Kuban Cossack, a former porch) and Alexey Avtonomov (a Don Cossack, served in the rank of cornet in World War I) commanded, by the way.

In general, it was a good time to close the shop, since political confusion in the heads of the Cossacks and the indulgence of overtly discriminatory actions of some “independent supporters” in direct robbery of neighbors from another class, disrupted most of the “patriots” of the PRC. As a result, the majority of the Cossacks simply did not appear to defend the “cradle” of the new state.

But from the north was approaching the Volunteer Army led by Laurel Kornilov. Having stepped on the throat of their own song, the retreating troops were glad they forgot about their orientation towards Ukraine, and a few troops joined the army of Kornilov. As a result, only on the bayonets of the white forces, which didn’t want to think about any PRC, the “independent supporters” returned to Ekaterinodar. At the same time, the storming of the city this time resulted in a long battle, divided into several attempts to seize the capital of the Kuban and deserving a whole book. 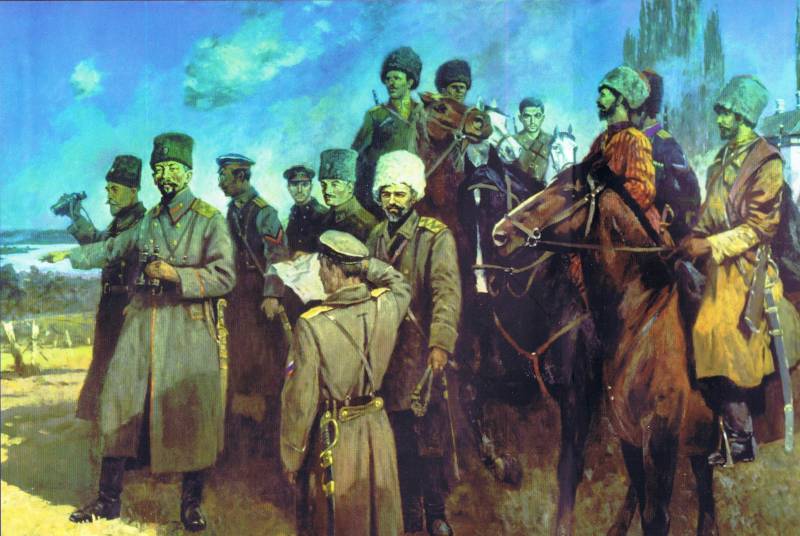 But this is all a prelude to one funny fact of "communication" are pleased and the command of VSYUR, which remained on the sidelines stories. It is no secret that the relationship between the “independentists” and the White Army became aggravated immediately after the violent stitching together of these ideologically opposing forces. When Anton Ivanovich Denikin became at the helm of the forces of the All-Soviet Union, it was simply unbearable to get along with the White troops.

It is no secret that Denikin treated political “Ukrainians” with undisguised contempt and rejection, Anton Ivanovich hated and opposed any “parade of sovereignty”. To assume that the politicizing Ukrainophiles of the Kuban with a characteristic aroma of settlement Denikin was somehow different, stupid. One of the striking examples of the greedy, as they say in the Kuban, Kugutskaya (an example of bragging and stupidity, coupled with ignorance and fierce greed even to the detriment of oneself), the politicians were glad to try ... to raise the ships and ships of the Black Sea sunken from Novorossiysk fleet. 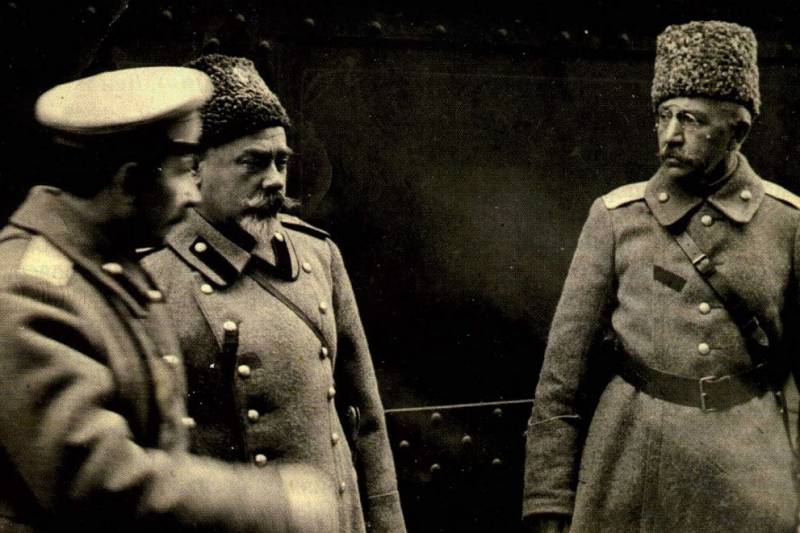 When Denikinites settled in Ekaterinodar and Novorossiysk, the port for them became a strategically important link in the supply chain and, naturally, a base for the future fleet. It was organized by the Marine Department in the capital of Kuban, and Vice-Admiral Gerasimov was appointed Chief Commander of the ports and vessels of the Volunteer Army. The Black Sea fleet was blocked by Germans in the Crimea at that moment, so the White forces began to work out a plan to lift the warships flooded in June of 1918 in Tsemesskaya bay. This task was partly doable. But there was no need to worry about personnel at all - plenty of naval officers fought in the forces of the white forces.

In addition, not only the warships of the Black Sea Fleet were flooded in the bay, but also quite civilian commercial ships used by the fleet as auxiliary for supply, etc., which no one mostly writes about right now. These ships were quite modern and valuable enough to lift them. 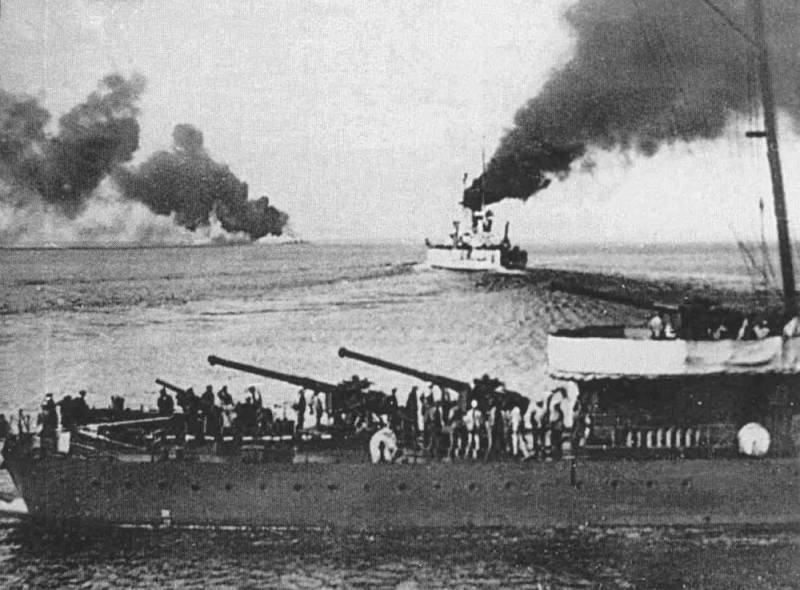 In the foreground the destroyer "Kerch" before sinking in 1918

Imagine Anton Ivanovich Denikin’s surprise, to put it mildly, when his headquarters, located at that time in Ekaterinodar, as well as the headquarters of the Ataman of the Kuban Cossack Army, 27 of October 1918 of the year appeared with a letter from Ataman Alexander Petrovich Filimonov. In a letter, Filimonov raised the question "about the possibility of using ships flooded in Novorossiysk, as well as private steamboats (!) Belonging to the subjects of the Allied powers for the needs of the regional government and the Volunteer Army."

One can only assume that at that moment Anton Ivanovich was ghosting. Perhaps a horrible vision, as representatives of Ukrainophiles from Rada come out of the Rada with songs and dances on oxen with bewilderment: “Mikola, and de oar?” One way or another, Denikin continued to study this document.

As it turned out, as early as September, the Kuban government set up a commission from among the engineers of the granary department to determine the possibility of raising sunken ships. According to these engineers, all vessels, except for the battleship sunk at the depth of the 28, lie at the depths of the 8-10 of the sazhen. Therefore, the Kuban people, led by the ataman, believe that “raising ships does not present serious difficulties with the help of those lifting and floating devices that are in the Novorossiysk port”. 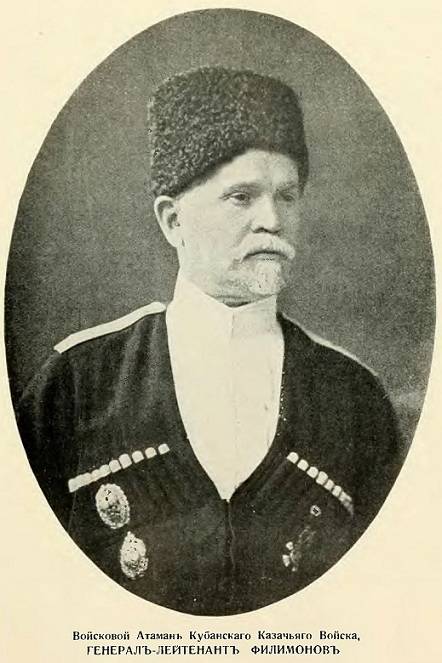 But then came the part that even more interested the general. From the letter: “In view of the great value of steamboats and the benefits that raised and repaired steamboats can bring to the Kuban Territory (apparently, the chieftain did not even dare to remember the republic in a letter to Denikin) and the Volunteer Army, I ask you to allow 6 commercial (!) Steamboats to be lifted Kuban government. These ships were the English “Trevorian” and “Frederica”, the Italian “Generoza” and “Serbia”, the French “Oxyuz”, the Belgian “Elborus”.

Also, the chieftain and Rada offered a very cunning (as it seemed to them) plan for raising the courts without burdening the budget. It was proposed to carry out lifting at the expense of attracted funds from private individuals, and after raising commercial vessels, these are the most private individuals and sold. And only then for the money raised to raise warships. In general, in my humble opinion, the plan was flowing from the very beginning. Unless, of course, it is assumed that she was glad to have been going to raise warships at all, and was not guided by Kugut avarice even at such times.

After all, the proposal itself took into account only the interests of the Kuban Rada, which already actively requisitioned other people's property. Moreover, the sequence of actions that the ataman set out so flowery at first glance shouted that in the end no one was going to lift warships in principle. Rada was aimed only at very expensive commercial vessels, in order, as they say, to lift the “pennies”. 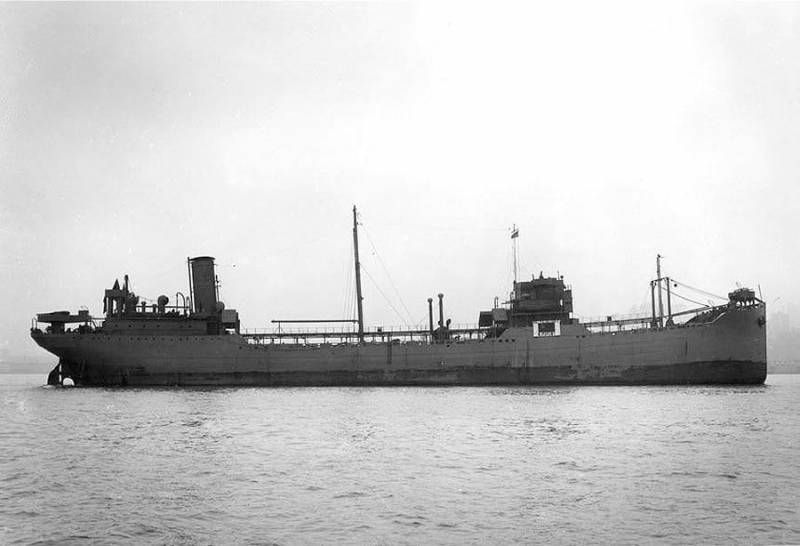 First of all, the Kuban government, with all the desire, was not able to even recruit a team, not only on warships, but even on civilian ships. Secondly, the ships, even if they lie at the bottom, were auxiliary ships of the Black Sea Fleet, and for Denikin this is not an empty phrase. Thirdly, the value of flooded only commercial ships was great. For example, the Belgian tanker Elborus at the time was a very modern ship. Even not so long, the Germans in Novorossiysk were eager to raise the Elbrus. Looking ahead, I will inform you that the tanker will be raised in August 1925 by the EPRON expedition and is included in the Soviet civilian fleet.

As a result, Anton Ivanovich gave a categorical refusal to the Kuban government. And in a curious form, giving the following orders to the "Military and Naval Division":

Thus, the peasant government of the Ukrainophiles could not put all-Russian money from the sale of the fleet into their purses.

Denikin's order to take action in raising ships began to be implemented. In Novorossiysk, a commission was organized, which included specialists from the Novorossiysk port and the Volunteer Army. However, the military situation has changed. The fleet, which was controlled by the Germans in the Crimea, regained its independence. And to spend scarce funds on a technically complex process did not have such a need.

Some sources claim that only the messenger ship “Pilot”, which was once a small destroyer of the “Dago” type, managed to raise it. However, others believe that this vessel was captured by the Germans in the Crimea, and therefore raised in Novorossiysk could not be. However, this does not change the essence of the entire history of the Kuban “ship lift”.