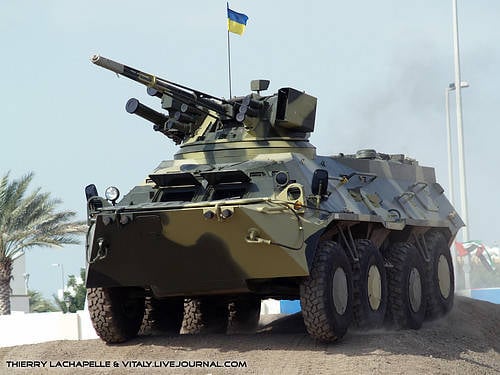 Cambodia received a batch of 100 Ukrainian tanks and armored personnel carriers. This is the second delivery of armored vehicles to the country. Cambodia arms in case of military confrontation with Thailand, which also purchases weapon in Kiev. Experts emphasize that Ukraine does not violate international standards and proves its competitiveness in the arms market.

100 new Ukrainian tanks and armored personnel carriers arrived in the port of Sihanoukville in Cambodia. According to the representative of the coast guard, the unloading of military equipment will take about a week. According to the local newspaper Phnom Pehn Post, this is the second delivery of armored vehicles to the country. At the same time, Thailand, which is in conflict with Cambodia, also recently received the first two armored personnel carriers from Ukraine.

Foreign Ministry spokesman Kabmodji Coy Kuong called the purchase of armored vehicles "a normal procedure for the state," which intends to protect the territories "from the encroachments of other countries."

Director of the Center for Army, Conversion and Disarmament Studies, Valentin Badrak, is confident that Cambodia is building up its military potential because it fears a military confrontation with Thailand in a dispute over the territory adjacent to the ancient Hindu temple Preah Vihea.

Back in 1962, the UN International Court of Justice ruled that the temple is located in Cambodia. But the states dispute the belonging of a strip of land 4,6 km long with the most convenient access to the temple. Both sides deployed military contingents at the border. And over the past two years, at least eight soldiers have been killed in border clashes.

Relations between Cambodia and Thailand again escalated a month ago, when Cambodia presented a plan for the protection of the temple to the UNESCO World Heritage Committee. And now it turned out that Kiev is supplying arms to both sides of the conflict.

Badrak is sure that Ukraine has always complied with international agreements that exist on the arms market, and from a legal point of view there can be no complaints about it. “Ukraine is a member of four international regimes. And within the framework of these regimes, it reports on all its shipments. That is, the arms business here is absolutely transparent. This is a state monopoly. So from the point of view of international agreements, Ukraine does not violate anything, ”said an expert to the newspaper VIEW.

Moreover, as Mr. Badrak stressed, “Ukraine is such a state, which very often makes concessions after requests that sound on the international arena.”

# {smallinfographicleft = 424488} “For example, in 1998, Madeleine Albright came to Kiev as the US Secretary of State and asked the leadership of Ukraine to abandon a very lucrative contract to build the Bushehr nuclear power plant in Iran. Refused, - Badrak told. - In 2004, the European Union asked not to supply weapons of Macedonia. Ukraine refused these supplies. In 2009, the Russian side asked for a cessation of supplies to Georgia. Again, these deliveries were discontinued. That is, Ukraine acts flexibly and listens to various requests from different sides. There were no requests for the states you named, no appeals or proposals were received, so everything that happens in the markets of these countries is absolutely normal. ”

At the same time, as noted by the interlocutor of the VIEW newspaper, the arms business is “not just an iron supply”. “This is an export of high technologies, which allows high-tech industries to develop. In the same Ukrainian armored personnel carriers and tanks there are very serious units, such as the sighting part or the protection of armored vehicles, or tandem high-precision ammunition. These are very serious things that allow Ukrainian industry to develop, and the country should stimulate such supplies. ”

As for the moral and ethical aspect of supplying arms to two conflicting parties at the same time, the director of the Center for Army Studies, Conversion and Disarmament said that if Ukraine does not supply weapons to these countries, "other suppliers will be found quickly." “The arms market is a market where there is very high competition. And any delivery of Ukraine is not just a delivery, it is a won contest with a number of other states, ”the expert emphasized.

In addition, the Ukrainian armored evacuation vehicles BREM after the trial batch in 2008, continued to buy Iraq. In 2009, 26 units of such equipment were supplied in the BREM-1U version.

And the volume of sales of equipment for Georgia really fell. In 2009, the Georgian army was replenished with only five Ukrainian BTR-70.

In 2008, Ukraine occupied the 14 place in the ranking of arms exporters. Now the country hopes to enter the top six, standing behind the United States, Russia, France, Germany and Israel.

It is worth recalling that Ukraine trades abroad mainly still with Soviet weapons remaining in the country after the collapse of the USSR. Own arms production in Ukraine is stagnating, and the supply of modern weapons to the Ukrainian army itself is negligible.