Nationalization-2. New battle of Lugansk and Donetsk with Ukrainian business

November 25, 2018
16
After the head of the Ministry of Incomes and Fees of the DPR, Timofeev (aka “Tashkent”) left Novorossia disgracefully, semi-legal production ties with Ukraine began to collapse, for which the industry, which was not under the management of Vneshtorgservice, was destroyed. 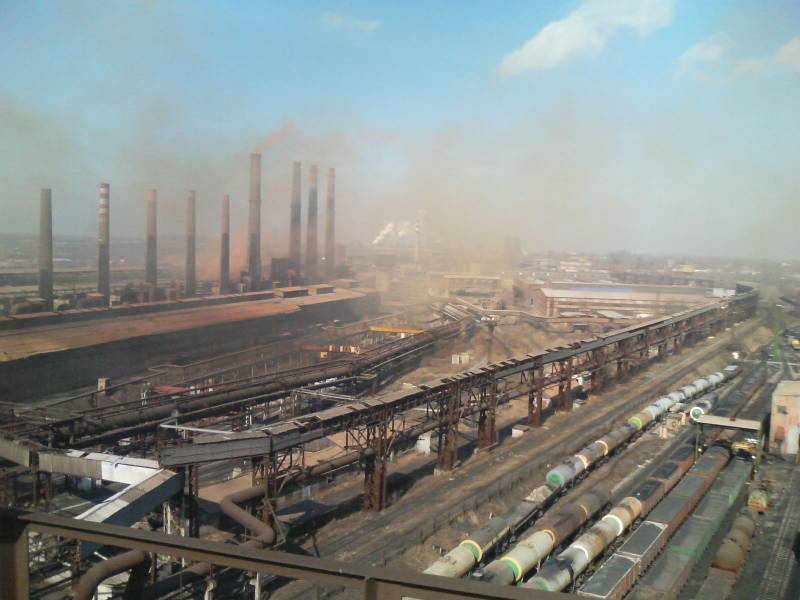 Apparently, it was decided to finally break with the Ukrainian business and the pre-war owners of industrial and mining enterprises, to start an active fight against smuggling, etc. Probably, in the future, the industry will continue to come under the control of "VTS", which today is engaged only in the most "tasty »Enterprises of coal mining, chemical and metallurgical industries.

What the “Vneshtorgservice” actually controls, no one in the republics can say with complete certainty, except for the company representatives themselves and the highest echelons of power. According to the latest data, these are metallurgical plants in Khartsyzsk, Makeyevka, Donetsk, Enakievo and Alchevsk. Coke plants in Yasinovataya, Makeyevka and Enakievo. Enterprise chemical industry "Air Likid", Komsomolsk mine administration and mine management in Krasnodon, Rovenky and Sverdlovsk. Recently, the Dokuchaevsky flux-dolomite plant has come under the control of the structure. Probably, new plants and mining enterprises will soon be added.

The first result of the fight against illegal exports was the cessation of the payment of wages in many enterprises, which until recently relatively comfortably existed under the conditions of the implementation of the "gray" schemes. Yes, the income from the activities of these enterprises went beyond the borders of the republics, partially settling in the pockets of representatives of the government structures of the republic, but people were paid and fed families. Therefore, today, when debts for 2-2,5 of the month appeared in many mines and plants, indignant voices began to sound.

In fairness it should be said that wage arrears exist in many enterprises that are hardly capable of working under “gray” schemes. So, for example, Lugansk electrical networks have just begun to pay wages for September. The management complains about the colossal debts of the Alchevsk Iron and Steel Works, which, apparently, the BTS is not in a hurry to pay.

As always, in the republics "is not so simple." But no matter how indignant the workers are, due to temporary financial and production difficulties at their enterprises, it is vital to destroy the heavy Ukrainian legacy in government and business, fight smuggling and transfer the industry of the republics to new rails. And this will have to be done both in the case of recognition of the LDNR and in the case of reunification with Russia.

Another question is how this will happen - how long will it take, how much will it first be elevated, and then will the “effective managers” go missing, how long will people have to wait for salary delays or just sit without work? If the work of nationalizing the economy is carried out fairly quickly and efficiently, it is quite possible to expect some improvement in living standards in the LDNR for the population (and a significant reduction in income for representatives of local and Ukrainian "elites"). If the process is disrupted or degenerates into profanation, the republics will lose first and foremost qualified personnel who will be forced to look for work in Russia, and after that, ordinary workers.

Population outflows and declining birth rates in the Donbas were also a significant problem in the pre-war years, but after 2014, the situation became dangerous. Considering how many men and women have moved to the Russian Federation or to Ukraine, but in fact remain registered in the LDNR, it is almost impossible to ascertain the exact migration situation. Nevertheless, it is enough to look at the birth rates in order to be worried - this year 9,5 thousand children were born in the whole Donetsk People's Republic. For comparison: in 2011, only in the city of Donetsk more than 8,8 thousand children were born.

No, the republics do not become desolate, even if life does not become simpler and easier, and the war will continue. However, the issue of restoring industry, which is vital in the long term, can be closed - the most qualified employees will find themselves in Russia, and the enterprises themselves will become worthless. So, the negative population growth will increase.

Today the situation is approaching a turning point. The challenges facing the “curators”, as well as the price of the issue, are very clear. It remains to hope that the negative experience gained in previous years was learned, and the conclusions were made.