Where did the first Scandinavians come from?

November 29, 2018
64
Over a number of materials published on VO, their readers had the opportunity to familiarize themselves with various aspects of the life of the Vikings (sailors, pirates, merchants), people of Scandinavia of a certain era, which, by the way, historians call the Viking Age. But what happened before that time? Well - there were separate publications about the culture of the ancient Danes and their burials, helmets of Wendel culture, a sword and a helmet from Sutton-Hu too. But ... and what happened before, well, let's say, in the same Stone Age. And not just in the stone, but at each of its stages or epochs? 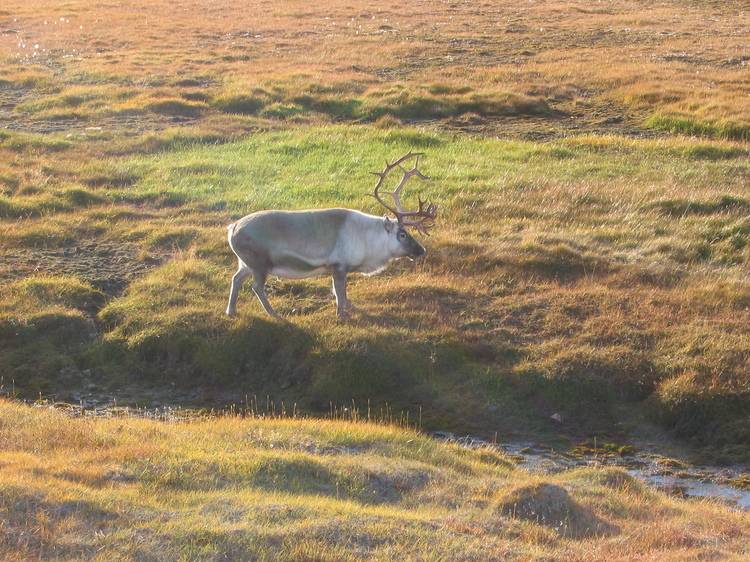 This is how the glacial tundra looked, in which ancient aliens on the lands of Scandinavia hunted on such deer.

At one time it was promised that material will appear on this topic, and now this time has come. Well, to begin the story about who the ancient Scandinavians were and where "their land began to eat" follows from the mention of very important finds made in 1996 in Wolf Cave in Western Finland. Many researchers believe that it was there that the material evidence of the presence of Neanderthals in it was discovered. In this case, the minimum age of the finds made there, archaeologists have estimated at 40 thousands of years. Note, before that, the most ancient evidence of a person’s stay in the North of Europe was considered to be finds dating back to about 8500 BC - that is, remnants of primitive settlements in Denmark, Sweden and Norway, as well as in the Baltic States and Finland.

It is known that the Stone Age, or rather its Paleolithic time, coincided with a large-scale cooling and glaciation. Glaciers then retreated, then again seized vast territories of Europe and Asia. And the last ice age was just some kind of 26,5 — 19 thousands of years ago.

The level of the World Ocean in this epoch was significantly lower than the modern one - approximately by 120 - 135 meters, since in the glaciers, which had a thickness of 3 - 4 km, the enormous mass of ocean water froze. Shallow seas such as the Yellow, North, as well as the Persian and Siam Gulfs simply did not exist at that time, or they were much smaller than the modern ones.

But somewhere between 15 000 and 10 000 years BC. er The last ice age is finally over. By this time, the entire Scandinavian Peninsula was covered with ice, but they too began to retreat about 12 thousands of years ago. First, Denmark and Southern Sweden were freed from their ice shell, then more northern areas. And then the tribes of primitive hunters, who lived at that time on the border with the ice, together with the herds of reindeer, began to move to the north.

That is, all the finds that are available to archaeologists, unequivocally say that the first people, and not "just people", but Cro-Magnons, appeared in Scandinavia just at the end of the last glaciation, that is, approximately 13 - 14 thousands of years ago, that is in the era of the Upper Paleolithic. But neither the bone remains, nor the tools of work of an earlier time, that is, those belonging to Neanderthals, were ever found on the territory of Scandinavia. At least two similar cultures are named, whose tools were found on the territory of modern Norway and Sweden.

Tribes that roamed the tundra of the postglacial era engaged in hunting and gathering. They also fished in rivers and lakes, of which there were a lot everywhere because of the melting of the glacier. The territory of the so-called Doggerland - the land lying between Denmark and England, and today hidden under the waves of the North Sea, was also truly a fertile place for primitive settlers. The finds of labor tools and a harpoon made of deer horn at the bottom of the shallow Dogger banks prove that once there was land and there were people who were engaged in fishing and hunting. Moreover, these were already people of the Mesolithic era, as evidenced by the shape of their guns and the technology of their processing. The banks of Doggerland are overgrown with reeds, in which a multitude of birds nestled, which enabled people to fish for them, staying at the same place. So it was here that the first pile settlements of sedentary, not nomadic, hunters and fishermen arose.

However, fate turned out to be harsh to them. In the period between 6200 and 6000 BC. er at the bottom off the coast of Norway, approximately in 100 km from it, one after another, three submarine landslides of loess soil, which were carried to the ocean as a result of glacier melting, occurred. The result was a tsunami wave, flooding all these low-lying lands. Well, and the further rise of the level of the World Ocean hid these lands from the people, thus separating the British Isles from continental Europe.

The rise of the level of the World Ocean also caused another phenomenon: the huge glacial Antsilovoe Lake, located in the southern part of the modern Baltic Sea, connected to the Atlantic Ocean, and in its place the Litorina Sea was formed, and the outlines of the coastline approached the modern ones. 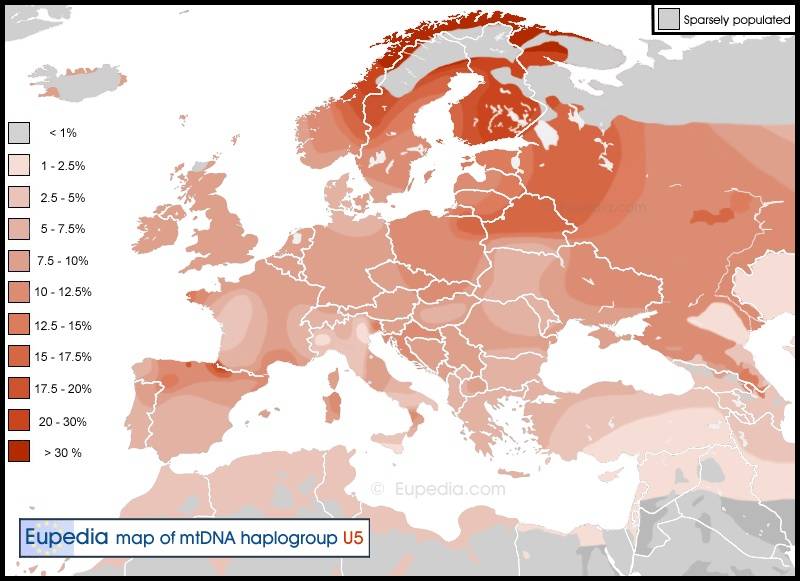 Map of distribution in Europe of haplogroups U2 and U5.

In the VII millennium BC. er Scandinavia has already begun to cover forests. At this time, the Mesolithic Maglemose culture (7500 — 6000 BC) was developing in Denmark and southern Sweden, and Fosna-Hensbach culture is to the north of it, in Norway and in a large part of southern Sweden. Here, on the eastern shore of Lake Vättern, the remains of seven men, who lived just in the Mesolithic period, ie, were found. about 8000 years ago. It was possible to determine their genetic identity, and it turned out that they have the mitochondrial haplogroup U2 and U5.

An indicator for the culture of the time is the flint microliths with a sharp edge, which were used as tips for spears and arrows. From 6000 BC. er their finds are becoming increasingly rare, but long flint flakes appear, characteristic of the Congemose culture (ca. 6000 — 5200 years BC), which went on tips and flint knives. This culture was also replaced by the Mesolithic culture of Ertebella (ca. 5300 — 3950 years BC) of the end of the Mesolithic era.

The transition to the Neolithic began in Scandinavia around 5000 BC. e., which led to the emergence in everyday life of the inhabitants of the peninsula, many innovations, especially ceramics. People learned to polish their stone products and, in particular, stone axes. Settlements have become permanent, quite large and located in the mouths of rivers. 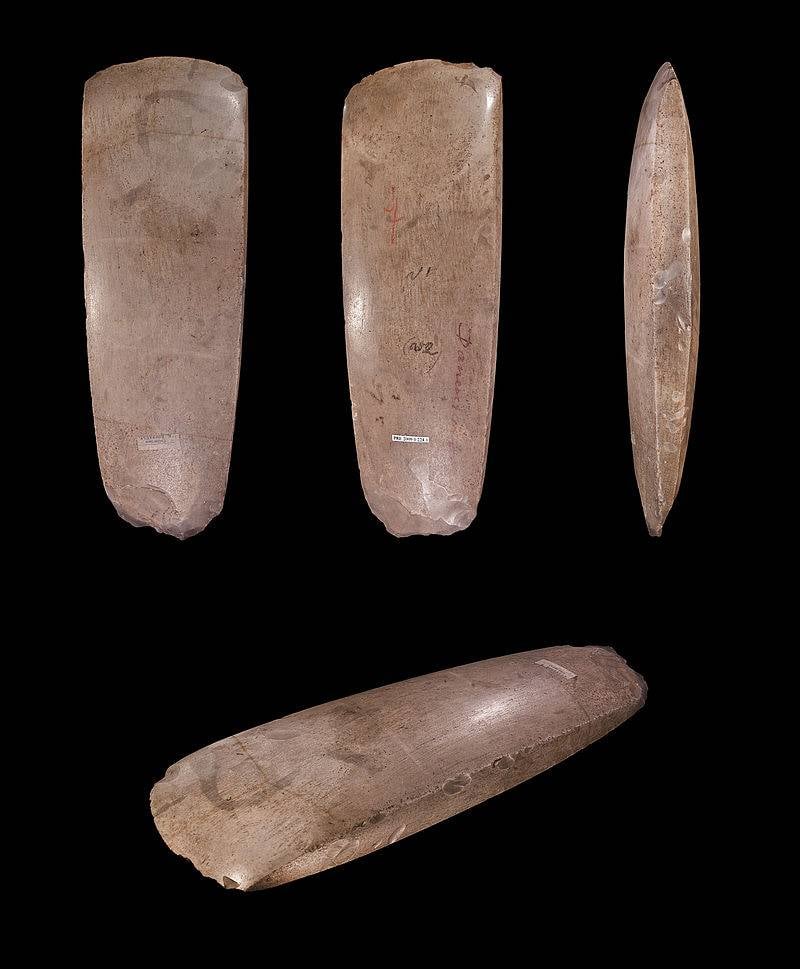 The culture of funnel-shaped cups (ca. 4000 — 2700 years BC) replaced the culture of Ertebella from continental Europe. Its main feature was the construction of megalithic structures.

Finally, by the end of III millennium BC. er this culture fell under the onslaught of continental aliens who belonged to the culture of battle axes, which many researchers consider to be carriers of early Indo-European languages. Stone polished battle axes served the people of this culture as a symbol of social status. Then the people of Scandinavia became acquainted with metalworking technology and entered the Bronze Age. 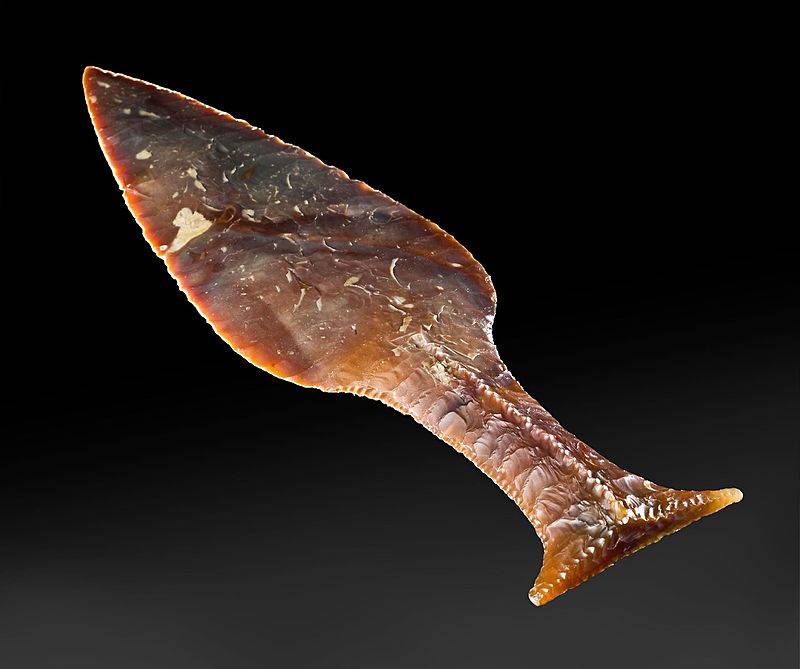 Interestingly, the Swedish-Norwegian culture of battle axes is represented by no less than 3000 burials. From 2500 — 500 BC. er There are also a large number of petroglyphs of western Sweden (“images from Tanum”) and in Norway, in Alta. Here, the first petroglyphs were discovered in the 1973 year. Now there are about 6000. Age from 2000 to 6200 years. In 1985, these rock paintings are listed on the UNESCO World Heritage List. But in Bohuslän found petroglyphs with images of a sexual nature, dated to the time of 800 — 500. BC. er So the plots of the Scandinavian petroglyphs are very multivalued! 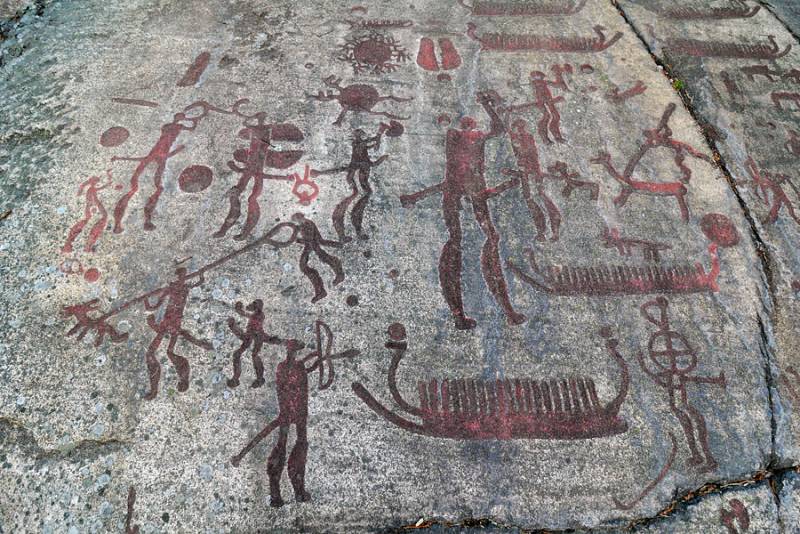 Rock paintings - petroglyphs in the municipality of Tanum, in Sweden. In 1972, they were discovered by a local resident, Age Nielsen, who wanted to blow up rocks with dynamite, and as a result found these unique images. In total, more than 3000 patterns have been found, arranged in groups in more than 100 locations along the coastal 25 kilometer line of the fjord during the Bronze Age. The total area of ​​the complex is 0,5 km². The age of the pictures is estimated to range from 3800 to 2600 years. Before us are a variety of scenes from the lives of people of that time: hunting, domestic scenes, weapon, animals, boats. Due to the effects of acid rain patterns are at risk. They are painted in red color specially to make it more convenient for tourists to consider. 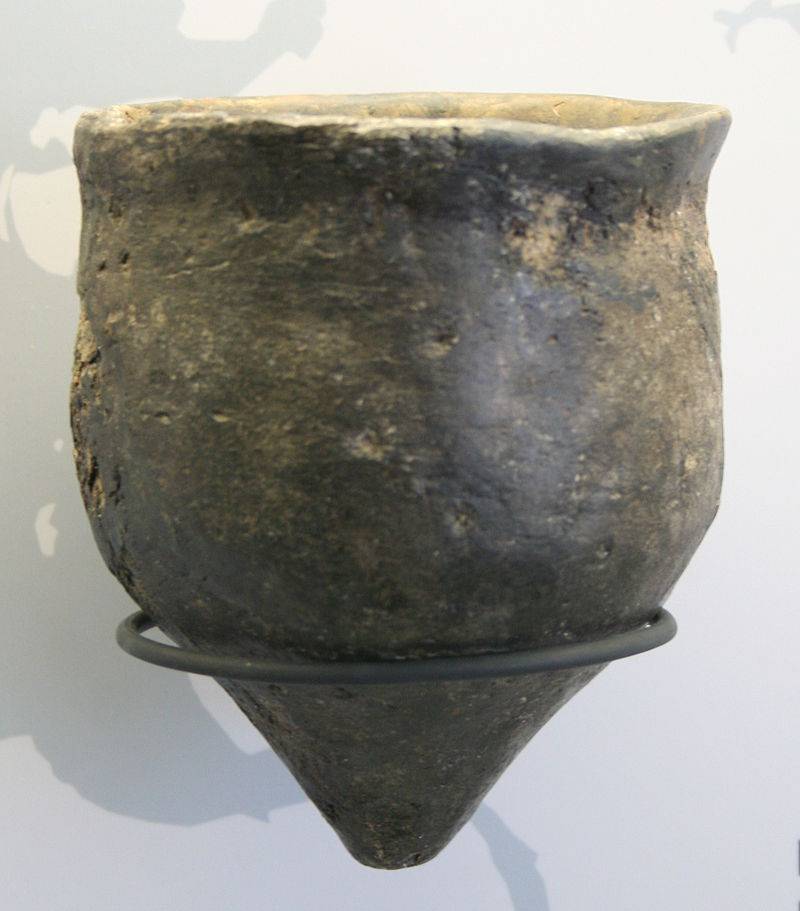 The early culture of the Scandinavian Bronze Age originated around the 1800 — 500. BC. er first on the territory of Denmark, and then spread to the southern regions of Sweden and Norway. Bronze weapons, bronze and gold jewelry, as well as artifacts from Europe appeared in the burials. From V to I century BC. er in Scandinavia began the pre-Roman Iron Age, which from about I to IV century of our era, the Roman Iron Age and a significant influence of Roman culture. And then the Wendel era and the "Viking Age" began ... 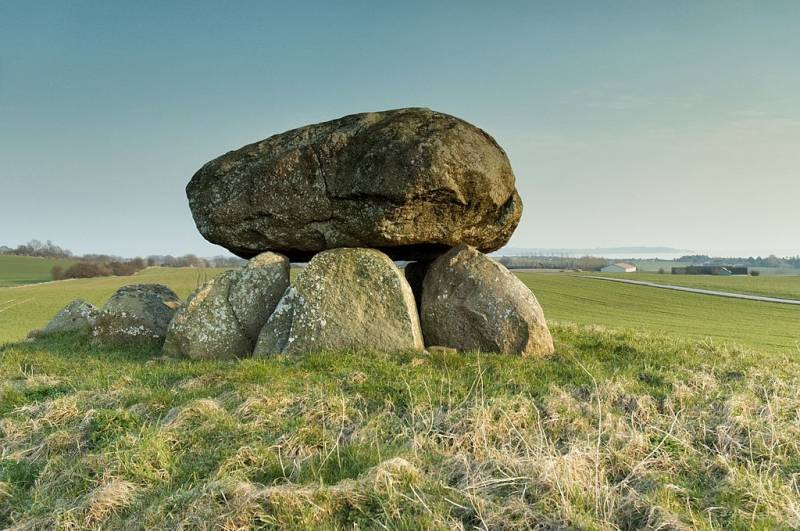 And now let us once again turn to the data of paleogenetics, especially since the research in this area under the project “Human Genome” is conducted regularly today and gives a lot of interesting things. First of all, we note that there is a certain similarity in the specific gravity of the same haplogroups in the average ethnic group between the Scandinavians and the Eastern Slavs:
- among the inhabitants of Scandinavia 20% R1a, 40% I1 + I2, 10% N1c1 and 20% R1b;
- among Eastern Slavs 50% R1a, 20% I1 + I2, 15% N1 с1 and 5% R1b. 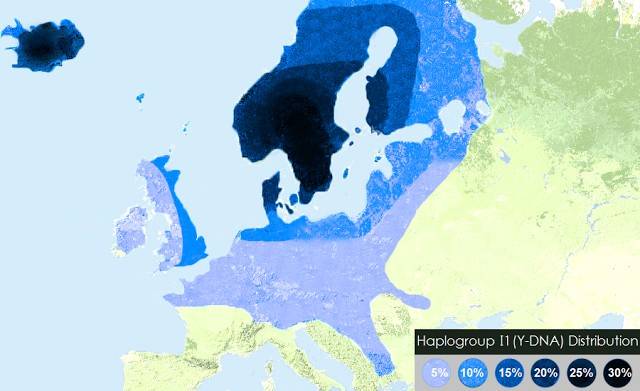 The distribution pattern of haplogroup I1.

The second is that the haplogroup I1 is traditionally Scandinavian and that the last common ancestor of the modern haplogroup I1 carriers lived 4 600 years ago. Moreover, the first mutation, which separated I1 from I, could, it is believed, happen even 20 thousands of years ago. Nevertheless, all those who possess this haplogroup today come from a single man who lived about 5 thousands of years ago. And this, as it once was, was when Indo-Europeans, who belonged to the culture of battle axes, came to Scandinavia, and who apparently destroyed most of the male part of the aboriginal population. 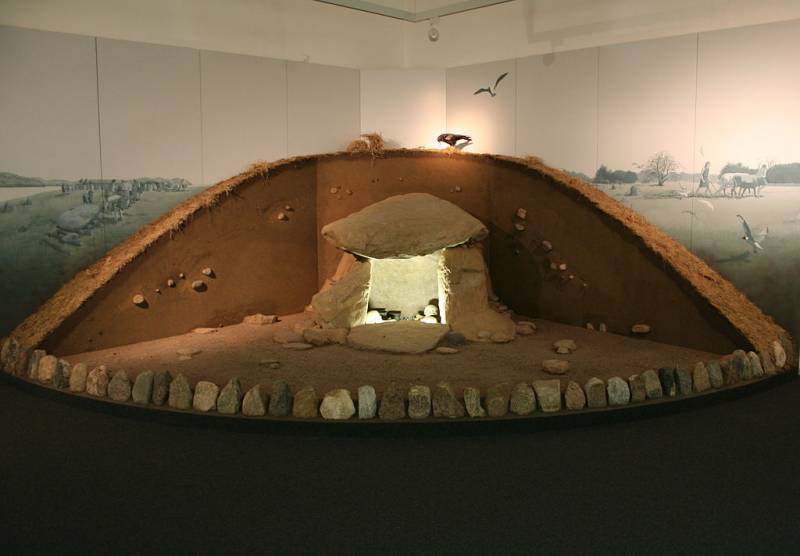 A study of the genetic lineage of the Podgornykh family from the village of Annino, Vologda Oblast, who lived here for a long time, was also conducted in Russia. It turned out that her men belong to the haplogroup I1a3b (Z138), which in popular literature is often called the “Viking haplogroup” (I1a). But the most interesting is its marker Z138. Today it is very scattered throughout the territories of Germany and Austria, but reaches its maximum on the coast of Wales and England, that is, in the area of ​​Danlo - “Danish law”. However, the warriors of the Danes made trips to the lands of the Eastern Slavs. For example, in the "Acts of the Danes" Saxon Grammar (written at the turn of the XII-XIII centuries) refers to the capture of Polotsk in the 5th-6th centuries by King Frodo I, the son of Hading, who killed the Polotsk king Vespasius, capturing the city with cunning. That is, DNA analysis shows that those who believe that the Scandinavian Vikings did not leave their genetic mark on the territory of Russia are wrong. Moreover, it turns out that among the Vikings ... there were also loyal family men who took with them both wives and children, and not just robbing new lands, but settling on them!