November 22, 2018
47
As part of the work of the Army-2018 international forum, the Kalashnikov concern presented to the general public a new prototype of the 7,62-mm automaton under the designation AK-308. Weapon built on the basis of the AK-103 machine with elements and components of the AK-12 machine under the common cartridge 7,62x51 mm NATO (.308 Win). According to the Kalashnikov concern, weapons are being prepared for preliminary tests.


The novelty from Izhevsk uses standard NATO ammunition 7,62x51 mm, this cartridge is widely distributed throughout the world, which already hints that the AK-308 model was originally developed as an export and is intended primarily for foreign markets. Store capacity - 20 cartridges. The weight of the new machine with the store (without cartridges) is 4,3 kg. The total length of the weapon is 880-940 mm, with the bayonet attached it increases to 1045-1105 mm. The length of the barrel is 415 mm. The machine is equipped with a diopter sight, as well as a length-adjustable butt, which has 4 positions, allowing the shooter to choose the most convenient length.

The Soviet analogue of the 7,62x51 mm NATO patron was and remains a 7,62x54R rifle cartridge (not to be confused with the intermediate 7,62xXNNUMX mm cartridge), which is used in conjunction with domestic samples of small arms: SVD and SVDS sniper rifles, as well as PC, PKM or PCP machine guns. The NATO ammunition, in addition to its size, differs from our case - it is wafer-free, that is, the edge of it does not protrude at the bottom of the case, it is “recessed” in size and separated by a channel. This solution improves the reliability of the supply of cartridges from the box store. Also, this cartridge is widely known under the designation of its commercial version of the 39 Winchester or simply. 308 Win. From here, by the way, and the name of the novelty from the Kalashnikov concern - AK-308. 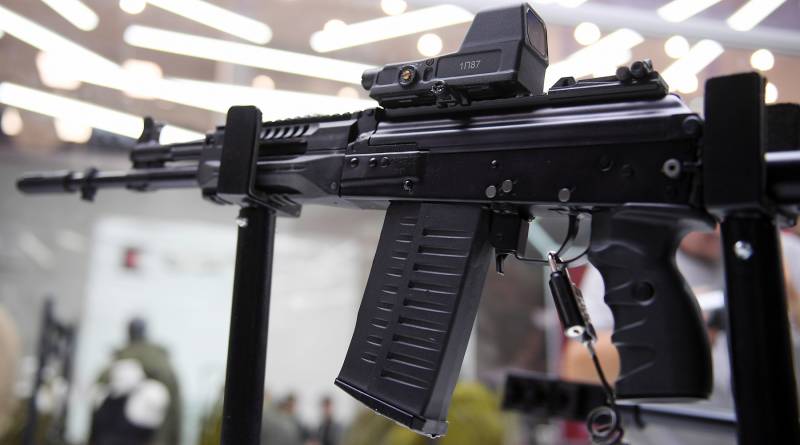 Creating a new small arms, developers often consider the prospects for its promotion in the international market. Potential most attractive buyers for Izhevsk AK-308 could be a huge Brazil or India, these countries can be called the dream of a gunsmith. Especially when you consider that in India now the army is being re-equipped with new small arms. In the land forces of India, in which more than a million people serve, back in 2016, the command decided to replace the INSAS automaton of its own design with a new 7,62-mm automatic rifle. Military requirements for new weapons were agreed in 2017 year. Earlier, India has already replaced the INSAS machines, which were in service with the police, with the Russian AK-103, as more reliable. The main complaint about the Indian development is a very large number of delays when shooting - up to three percent, in Russian AK-103 when shooting this figure is 0,02 percent. It cannot be ruled out that the weapon will attract the eternal enemy of India - Pakistan. In the framework of the Army-2018 forum, it was the representatives of Pakistan that were most active in relation to the novelty chambered for 7,62x51 mm, which also makes it possible to speak of them as potential customers of the new machine gun.

In addition to high reliability and dependability, which traditionally belongs to the advantages of weapons under the AK brand, Russian small arms compete perfectly with foreign models for the price. When it is necessary to re-equip an army like the Indian one, the price of weapons begins to play a very great value. AK-308 Project Manager, Kalashnikov Concern Specialist Alexei Shumilov, in the framework of the Army-2018 forum, told Zvezda journalists that, in terms of combat qualities, the presented prototype, after debugging and testing, will become a universal weapon for combat, as well as other machines under the Kalashnikov brand. According to Shumilov, the ergonomics designed for the .308 Win machine gun are taken from the new Izhevsk AK-12 and AK-15. Also, the AK-308 has been upgraded gas node, the trunk - posted.

A free-hanging barrel (the English designation of a free-floating barrel) is a special way of mounting the barrel in small arms, the main purpose of which is to increase the accuracy of shooting. Over time, under the influence of various environmental factors or conditions of use of weapons, the geometry of the frame (bed) can change, which, in turn, affects the barrel, and only then the trajectory of the bullet. And the barrel itself fluctuates during firing: the contact between the barrel and the frame prevents such natural vibrations, which also affects the accuracy of shooting. In order to exclude contact of the barrel with other parts of the weapon, a special design was invented in which the barrel has contact only with the receiver. It is to the receiver that all the other parts and assemblies of the weapon are attached, while the barrel retains the possibility of making free natural vibrations during firing. Nowadays all over the world, precision weapons are constructed and manufactured with the technology of a freely hung barrel. 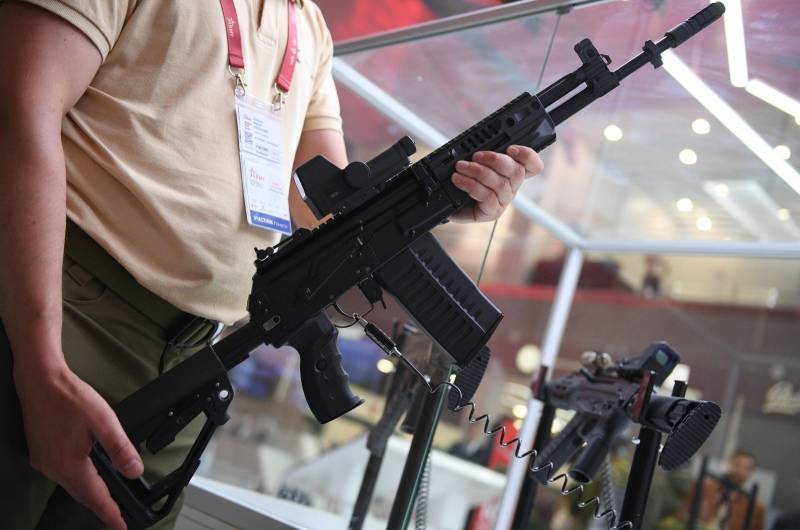 The new Kalashnikov concern also has a cut-off mode of fire, which allows you to fire three bullets at a time by one pull of the trigger. Also, unlike the AK-12, the AK-2018 submachine gun presented at Army 308 is equipped with a folding telescopic butt. Literally in seconds, the shooter can change its length: shorten or, on the contrary, lengthen according to need, or even fold the butt sideways, making the weapon as compact as possible. With a folded butt with AK-308 you can comfortably accommodate in the troop compartment of a combat vehicle. Alexey Shumilov also noted that the novelty received Picatinny-type strips designed for mounting various tactical body kits: laser sightings, tactical lights, any types of modern sights.

Mikhail Degtyarev, the chief editor of Kalashnikov magazine, also expressed his opinion on the new product. He does not understand why the experts of the Kalashnikov concern see the AK-308 AK-103 machine gun as the basis. Considering the use of the machine gun receiver from the Vyatka-Polyansky machine gun RPK-16M in the novelty (as in the RPK-74), it would be more logical to say that AK-308 is the development of this particular model of small arms. Not being a carrier of any "know-how" in the modern world of small arms, the novelty in the future will be able to occupy its niche and expand the line of classic automats of Izhevsk enterprise.

Degtyarev notes that the new 7,62x51 mm automatic rifle is built around the RPK-74M receiver, which has a much greater margin of safety (compared to the conventional automatic) and is able to withstand cyclic shock loads when firing the selected ammunition. Moreover, the shock load can be easily adjusted by the speed of the moving parts in the rollback and by the correctly selected venting hole in the barrel of the weapon. 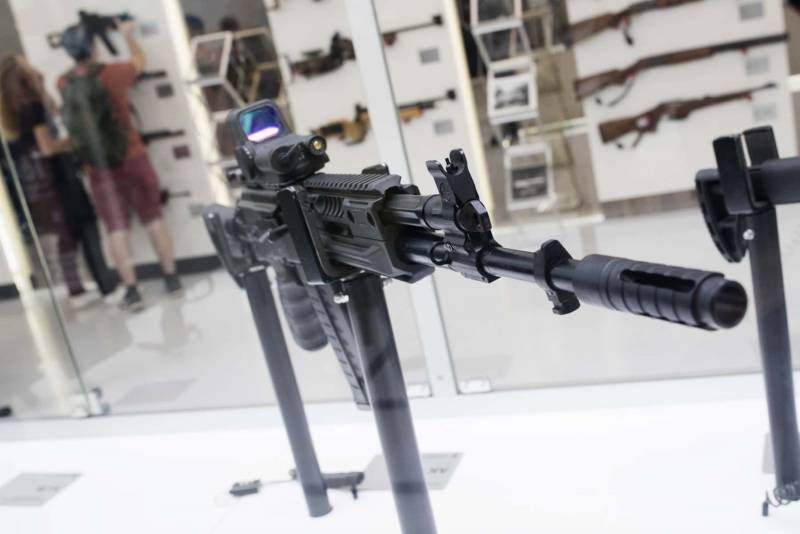 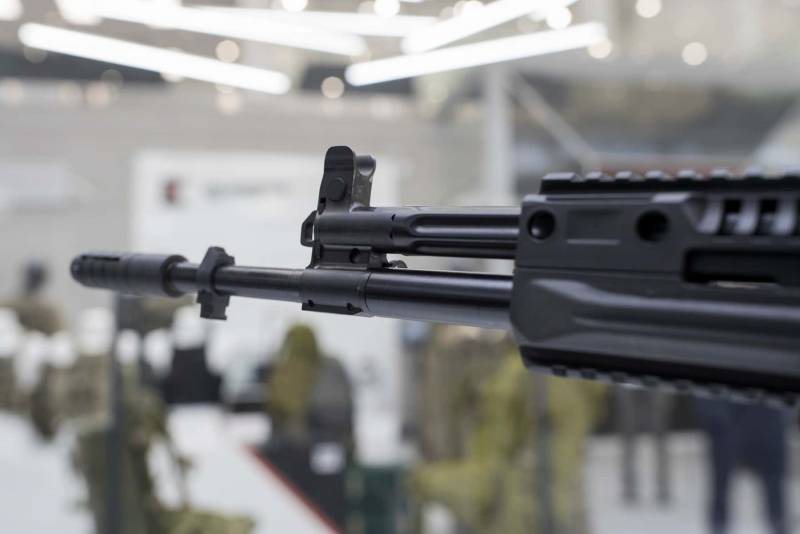 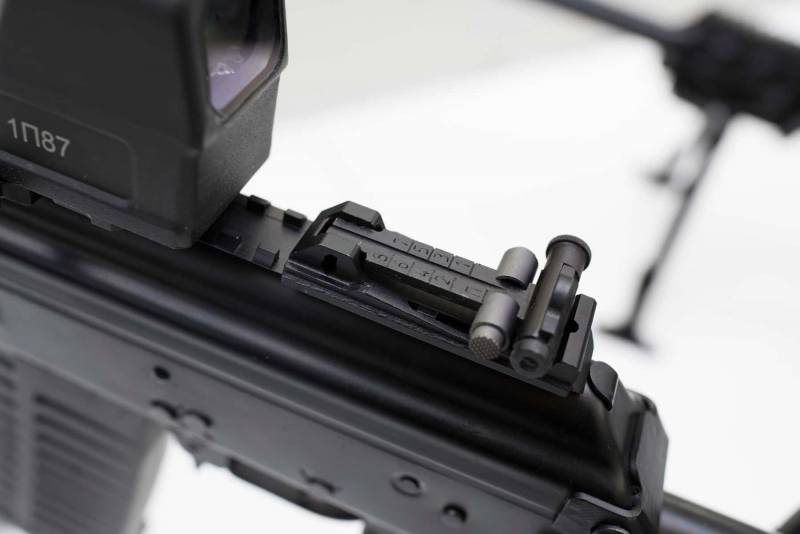 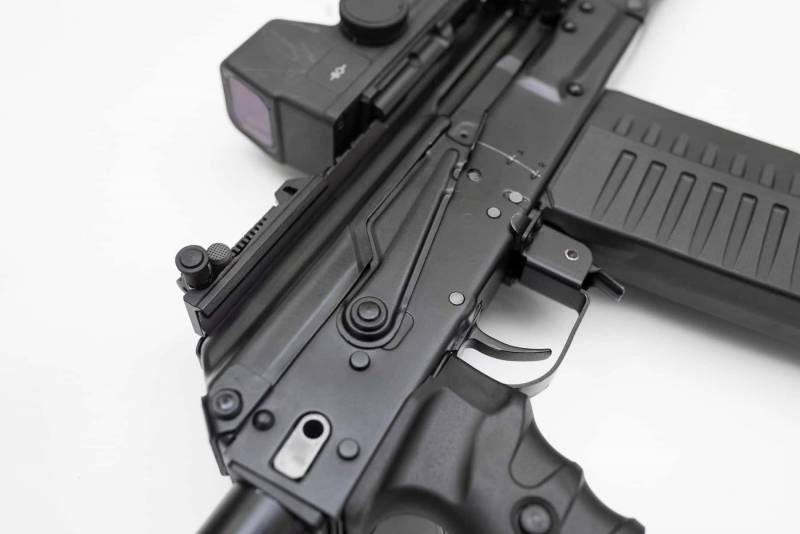 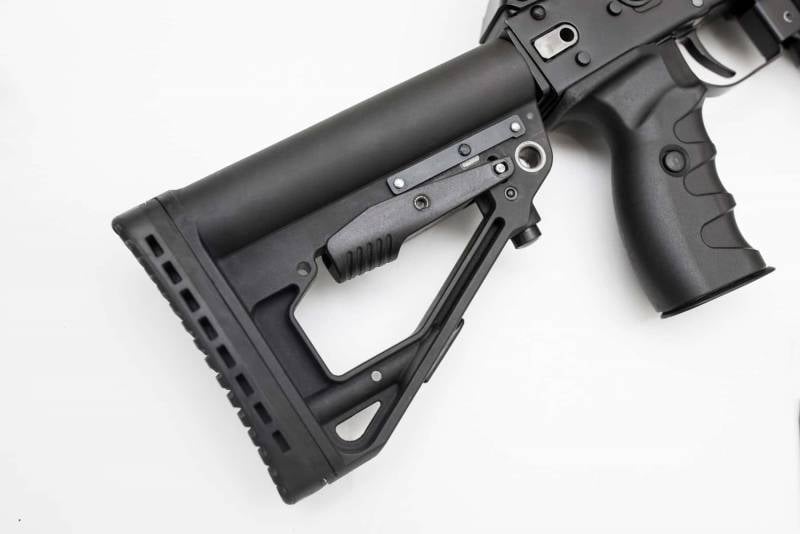