November 21, 2018
9
When developing tanks the main attention was always paid to its creation as an independent combat unit, and practically nothing was laid for the interaction of the tank in the unit, except for the radio station. 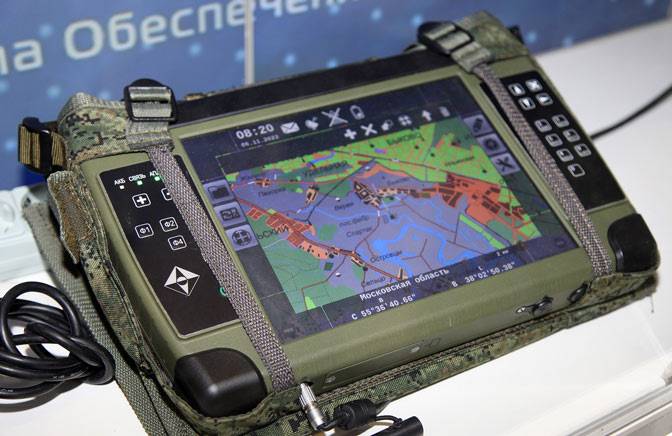 This issue began to be given more serious attention with the advent of the global navigation system GPS. So, in the article "The United States found the weak spot of Russian tanks", it is reported that the American "Abrams" are already equipped with a system that displays the location of their tanks on the commander's map, and on Russian tanks there is something like that only on the T-90AK command tanks.

It is difficult to say how much this is true, except for articles, reliable information that Abrams is equipped with such a system is not available yet. On the equipment of Russian tanks information is also controversial. According to some sources, certain elements of such a system are implemented in the “Constellation” tactical link control system. At what stage, development or mass production, is it? No full information.

An attempt to implement a tank interaction system as part of a unit was made back in 80-ies when developing the Soviet tanker Boxer, which was supposed to be equipped with modern combat control tools as part of a tank unit. With the collapse of the Soviet Union, this work has not been completed. According to the developers of the Armata tank, such a system has been implemented in this tank.

The system of interaction of the tank was considered as one of the tasks solved by the crew. When performing their functions, the crew solves four tasks with the help of technical means: controlling the movement, fire, protection and interaction of the tank. The implementation of these tasks was carried out with the help of a tank information and control system, including four autonomous systems that exchange information with each other through an onboard computing system.

The interaction system includes a navigation system (global and inertial), a channel for the exchange of information between tanks and higher-level commanders, and a commander's monitor for displaying a map and location of a tank. Each tank is set to receive signals from global satellite navigation systems - the Russian GLONASS and the American GPS. The receiver provides reception of signals from the “constellation” of three satellites “hanging” in geostationary orbits in the area. The computer from these signals calculates the coordinates of the tank, transmits them to the information display system to the tank commander, which on the monitor of the commander displays a map of the area and the location of the tank on it.

The tank may also have an autonomously operating inertial navigation system, including gyroscopic instruments (mechanical or laser), which determine the position of the tank in space. The coordinates of the tank can be obtained automatically from the global navigation system or given by the tank commander on the map when the system is turned on.

In the process of movement, the system receives information from the tank's motion sensor and gyroscopic instruments and calculates its position coordinates, the direction of movement and the position of the tank in space, which is fundamentally important for target designation and target distribution. Global and inertial navigation systems can work together and adjust their data on the calculation of the coordinates of the location of the tank.

On the communication channel, automatically or on request, the coordinates of the tank are transmitted to higher-level commanders, and their monitors display the location on the map of subordinate tanks.

Crypto-resistance is necessary to prevent the enemy from intercepting the transmitted coordinates of the tank, since in this case he will have information about the exact position of the tank and can easily hit it. To ensure the specified cryptographic strength, the information exchange channel must be equipped with security equipment. The channel must also have a high noise immunity, since in the area of ​​use of the tanks the enemy can use an electronic countermeasure system and prevent stable operation of the communication channel.

On the battlefield, there may be tanks of their own, not equipped with an interaction system. They will not be displayed on the monitor of commanders of different levels and will be perceived as enemy tanks. To exclude such situations and prevent the destruction of their tanks by airplanes and fire support helicopters within the framework of the "Boxer" tank project by the developers aviation systems of state recognition "friend or foe" developed a similar system for tanks, which was to be installed on all tanks. With the collapse of the Union, these developments were also discontinued.

The system of interaction can be both autonomous and an integral part of a tank information management system. Autonomous system can be equipped with any tanks at the stage of production or modernization. The installation of a full-size TIUS requires serious reworking of the movement and fire control systems of the tank, equipping the tank with new fire control devices and is only possible with the production of new tanks.

In the variant of equipping the TIUS tank, it is possible to transmit information about the presence of ammunition and fuel and lubricants on board the tank, as well as the implementation of target designation and target distribution to subordinate tanks.

The introduction of a tank engagement control system provides a fundamentally new quality for managing a tank unit and the possibility of creating a network-centric tank, which will be one of the interrelated elements of battle management coordinated with other military equipment when performing the task. Equipping tanks with an interaction system requires a targeted program with the connection of specialized enterprises - developers of the system's components and the organization of their mass production.