Moscow and Damascus risk losing half the course of the Euphrates. Fake maneuver with an attack on the SDF worked

November 20, 2018
21
At the same time, Turkish President Recep Erdogan continues his demonstration with absolutely feigned calls for Donald Trump, White House head, to stop supporting Syrian Democratic Forces fighters (including Kurdish PKK and YPG), ostensibly hinting that the first phase of the ground operation against The SDF in the region of the canton of Kobani, the CAA command, continues to blindly trust Ankara’s militant anti-American pathos and has even managed to once again step on the old rake. We are talking about the recent transfer of additional units of the Syrian government forces to the Deir ez-Zor area and to the section of the contact line with the Kurdish forces of the Syrian Democratic Forces in the province of Rakka (8,5 km south of the Et-Tabka airbase). According to the syria.liveuamap.com fighting map and Twitter, a page on the @VivaRevolt Syrian news resource, the Syrian Arab army has increased its presence here to maintain stability on the east coast of the Euphrates if will begin an assault on the north-western regions of Syrian Kurdistan, and the retreating SDF will attempt to force the Euphrates and occupy territories under the control of the Syrian army. 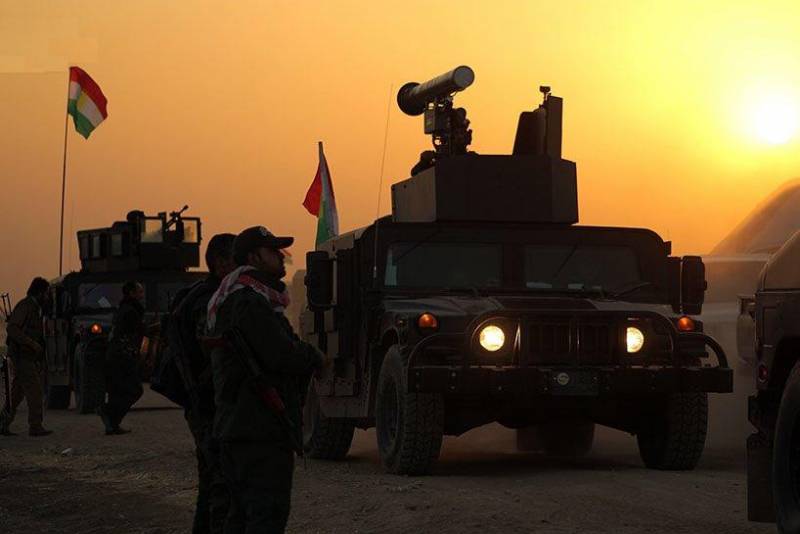 Nevertheless, it is necessary to recognize that this decision of the CAA command, with a high degree of probability agreed with the General Staff of the Russian Armed Forces, is deliberately a losing one, since there can be no talk of the offensive of the Turkish ground forces on the canton of Kobani and even more Regular inclusion of this topic on the agenda of various rounds of the Turkish-American negotiations, as well as in the texts of press conferences and Erdogan’s statements is an attempt to divert the Russian and Syrian sides from Turkey’s true regional ambitions, as well as from the fact that Ankara and Washington work in a single anti-Russian “ bundle ". Even if we temporarily move away from the geopolitical component of this intricacy and dwell on the operational-tactical scenario, it becomes clear that the offensive operation of the Turkish army on the eastern bank of the Euphrates will “choke” on the 20th-30th kilometer of the “breakthrough”.

After all, the most combat-ready Kurdish units of the Syrian Democratic Forces, possessing modern American anti-tank missile weapons, including the Javelin FGM-148 ATGM capable of “detonating” Turkish Sabra Mk60 and Leopards, will be involved in stopping the Turkish offensive. 2A2 ”in the most vulnerable parts of the upper armor plates of the corps in the MTO area and the tower. Moreover, Kurds may well be provided with direct support from the artillery batteries of the US Marine Corps, which will work on the upcoming Turkish units from HIMARS MLRS and 4-mm towed howitzers M155A777. The most powerful fortified areas of the American army and divisions of the French marines have been erected to date on the territory of the cement plant Lafarge SE, as well as in the settlements of Manbij, Ain Isa, Sabt, Ain al-Arab, Ain Dadad, Ashariya, Kharab Isk, Tell Tamir, Tell-Beidar, Al-Shaddadi and Rmeilan. Most of them are located at a distance of no more than 2 km from the Syrian-Turkish border and are covered with tactical fighter jets F-30E "Strike Eagle", as well as the barely noticeable fighter jets of the X-generation F-15A "Raptor". Conclusion: there is not a single argument in favor of the Turkish attack on the SDF positions in Syrian Kurdistan, which means that the concentration of CAA units in the above areas undermines the combat stability of the Syrian army in far more unpredictable operational areas.

First of all, we are talking about the Idlib direction, where the militants of the Islamic Party of Turkestan, the so-called People’s Liberation Front and Tahrir ash-Sham, following the Ankara rush, gradually increase the number of shelling from heavy machine guns and artillery strikes against villages and masks of the Syrian army, located in the provinces of Hama and Aleppo, which only in the last week led to the death of more than 10 Syrian troops. As we can see, no observance of the ceasefire regime by Turkey, established during the Sochi round of talks between Vladimir Putin and Recep Erdogan on September 17, is already out of the question, not to mention Ankara’s positioning as a guarantor of the 15- established by the Sochi agreements 20-kilometer demilitarized zone. Everything points to the fact that the joint US-Turkish plan to loosen the combat capability of the CAA with an attempt to further squeeze it out of the central regions of Syria remains in force.

A more explosive situation is observed in the south-western regions of the republic (in the desert of the Deir-ez-Zor governorate, as well as along the Euphrates channel between the cities of Meyadin and Abu-Kemal). Thus, the Syrian Democratic Forces, citing the need to transfer the best units allegedly to block the offensive of the Turkish army in Kobani, completely stopped the anti-Igilov operation “Storm of Jazeera” in the “Hadzhinsky pocket”, while the US Air Force continued its demonstration performance with drawing “fake "Rocket-bomb strikes on the same fortified areas near Hadzhin, which was done solely to put Washington in a favorable light in front of Western European media space and world community Twomey. All this allowed the IG formations (forbidden in Russia) to return under control vast territories in the Baguz Takhtmi triangle - Lake Sabhat Mallah - Khadzhin (together with the oil fields of Mintaqat Abu Kemal and Susah and adjacent heights). Consequently, the jihadists completely restored their offensive potential to force the Euphrates and attack cities on the west bank of the great river. 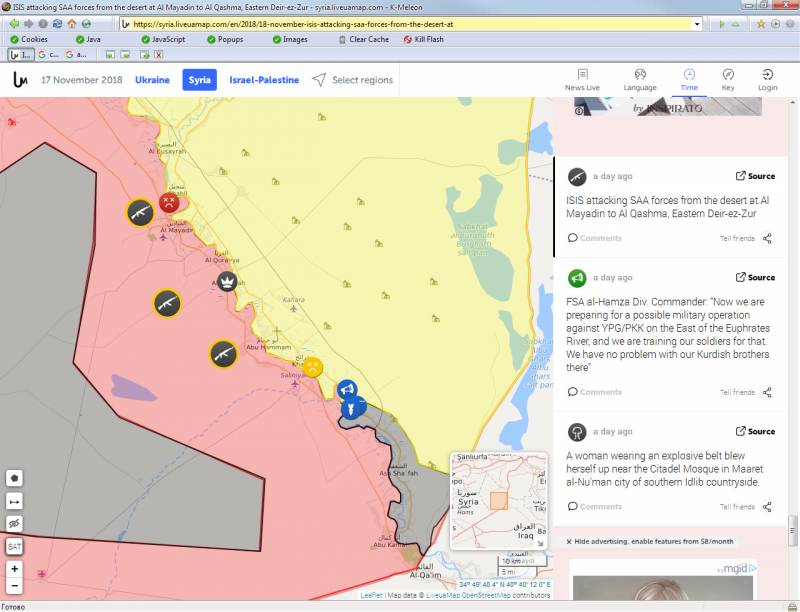 Tactical situation in the area of ​​the Euphrates, the “Hadzhinsky pocket” and the “sleeping cauldron” of the IG on the west bank of the Euphrates on the night of November 18

Against this background, the awakening of the largest 165-kilometer IG “sleeping boiler” (it was never cleared by government forces), located in the desert area of ​​the Deir-ez-Zor and Homs provinces, occurred. On the night of 18 in November 2018, several pseudo-caliphate units advanced in the direction of the Euphrates and attempted to assault the Syrian army strongholds in the villages of El-Kishmah, Wadi al-Khavr, as well as the strategically important city of Meyadin. This throw of militants at the same time on three operational directions, marked on the tactical online map of syria.liveuamap.com, despite its successful failure, was the most serious and revealing in the past few months.

It was carried out on the front section of width 35 km. And this only indicates one thing - the possibility of combining the efforts of the Hadzhin igilovtsy with the militants from the "sleeping cauldron" on the west bank of the Euphrates. Another two-three such attacks could be fraught with blocking the southern (Palmyra-Abu-Kemal) and northern (Deir-ez-Zor - Meyadin) motorway corridors, which would deprive the advanced units of the CAA in Al-Asharah, El-Kuria and Meyadin the possibility of obtaining material technical support, and this is a direct path to the new Meyadinsky boiler, which, after the relevant shadow deals between the SDF headquarters and the field commanders of the IG under the auspices of the US Central Command, will simply be in the hands of the ILC and the United States. This is one of several variants of the American “Plan B”, which is closest to implementation. To prevent its implementation, the Syrian Armed Forces command and the General Staff of the Russian Armed Forces should move away from the practice of thoughtless trust to Erdogan’s statements about the inevitable attack on Northern Kurdistan, and also project all the CAA’s defensive capabilities on the formation of a “barrier” in the Abu Kemal and Meyadin areas.