November 20, 2018
466
New Soviet reality, civilization created recently. She just had to materialize, become a full-fledged world. And for this it was necessary to actively fight with internal and external enemies. It was impossible to give the old reality - the feudal, capitalist world, based on social injustice, parasitizing the few "elected" over the masses, to return, to subjugate the new world, the Soviet civilization. This meant an active struggle with internal and external enemies.


Obviously, this has become one of the priorities of Joseph Stalin and his government. In addition, an external threat was also associated with an internal threat. The masters of the West, the global mafia, after failing to destroy Russian civilization and the Russian people by the hands of revolutionaries of Februaryists (Westernizers) and revolutionaries of internationalists, Trotskyists, relied on fascism and Nazism - the “brown and black plague”. The Nazis, the Nazis and the militarists were given the "green light" in Europe and the East. The young Soviet civilization was surrounded by enemies who clearly showed that they were planning to seize Russian territories: nationalist Finland, Pansky Poland, Romania, Germany, militaristic Japan, etc. The Western masters helped Hitler and the Nazis to come to power, to build the Third Reich charged “ onslaught to the East ”, in the Far East, the Japanese Empire was actively preparing for war with Russia-USSR. In the face of the ring of enemies, the Soviet Union was to become a single steel monolith, ready to repel the leading great powers of the West and the East.

It was also obvious that not only the spiritual and moral mobilization of the population is necessary, but the corresponding material support. It is impossible to give an appropriate rebuff to the enemy with bare hands, the defense potential meeting the challenges of the era is necessary. Need to create weapon victories - modern Tanks, airplanes, guns, ships, which will allow the new Soviet world, the super-civilization of the future, which for centuries has pulled ahead from the swamp and mud of the animal, predatory world, to repulse the predators and aliens of the West and East who want to enslave, rob and destroy Russia. It was necessary to create a material support - a powerful industry, energy, military-industrial complex, advanced industries - aircraft, machine building, shipbuilding, engine building, tractor-tank building, rocket science, in order to speak the old world in a language that is accessible to him - the language of power. It was precisely this super task that the industrial policy of the new Russian empire, the Soviet, was devoted to. It was to her that science and the education system and the education system worked to a large extent. The second (or first) most important task of the USSR education and upbringing system was the creation of a new Soviet man — the creator, creator, hard worker, teacher and soldier. He was a man of the future society - a society of knowledge, creation and service, living on the basis of ethics of conscience and social justice.

It was these tasks that determined almost all aspects of the life of the Soviet, Stalinist empire. New Russian Empire, which took in the past all the best that was there (Alexander Nevsky, Dmitry Donskoy, Alexander Suvorov, Fedor Ushakov, Mikhail Lomonosov, Alexander Pushkin, Mikhail Lermontov, etc.), and with great strides went into the future. 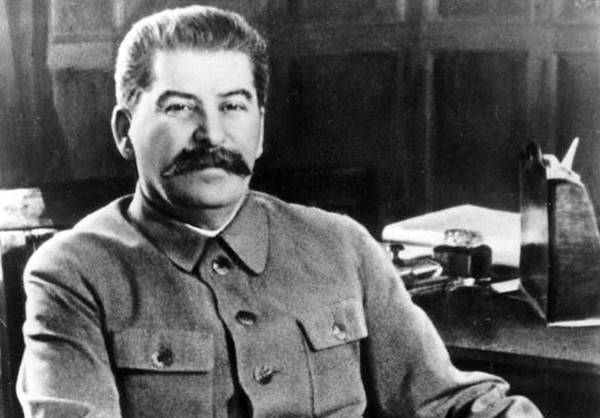 Stalin understood everything perfectly. And he spoke about this to people in simple words. So, everything is perfectly said in the material “On the tasks of business executives: Speech at the First All-Union Conference of Socialist Industry Workers in February 4 of 1931”. Stalin told what is required of Russia and the people to flourish. First, “sufficient natural resources are required in the country: iron ore, coal, oil, bread, cotton. Do we have them? There is. There are more than in any other country. Take, for example, the Urals, which represents such a combination of wealth that cannot be found in any other country. ” We in Russia have everything for confident development, consistent improvement in the life of the people. That is, “on the part of natural wealth, we are fully provided. We have them even more than necessary. "

Second, the what is required is “the existence of such a power that would have the desire and strength to move the use of this enormous natural wealth to the benefit of the people” Then this power - the Soviet, was at the head of the country. Therefore, the Soviet Union and developed at an amazing pace, creating a civilization of the future, showing a positive example to all mankind. Now it's all the other way around, power is again among the predatory capitalists, the slave-owning oligarchs who are involved in creating the “new world order” - the global “digital concentration camp”, the non-slave-owning civilization with the division of people into “chosen”, gentlemen and slaves-consumers, who are “state should not. In the hands of 1% of the population of Russia and almost all the national wealth, and they work not for the people, but for the owners of the West and the East, for the global mafia. Hence all the troubles of Russia and the people, both current and future. And then it will only get worse.

Third, It is required that “the authorities enjoy the support of millions of workers and peasants. Does our government enjoy such support? Yes, it does. All over the world you will not find another such power that would enjoy such support of the workers and peasants as the Soviet power enjoys. ” The present power, by deceiving and creating confusion, illusions, received the support of the people. But as the internal problems increase, the external threat to Russia increases, the mirage of a prosperous and “rising from its knees” Russia collapses. More and more people see that the capitalist and liberal power in Russia is leading the country to a catastrophe, a new turmoil, while the pace of embracing people is rapidly gaining momentum. Society disintegrated into a handful of gentlemen, the rich, a caste of "new nobles" who are allowed everything and the poor, destitute populace who have no future. Moreover, for the raw materials, colonial economy of Russia (as well as Ukraine) - the main part of the people is “superfluous”.

All this has already happened. Further, the Soviet leader Stalin shows the essence of the Western, predatory capitalist system, which was established in Russia in the 1990s. For the prosperity of the people, it is necessary “the existence of such a system that would be free from the incurable diseases of capitalism and which would give serious advantages over capitalism. Crisis, unemployment, waste, poverty of the masses - these are the incurable diseases of capitalism. Our system does not suffer from these diseases, because the power is in our hands, in the hands of the working class, because we conduct a planned economy, systematically accumulate resources and correctly distribute them among sectors of the national economy. We are free from the incurable diseases of capitalism. This is our difference, this is our decisive advantage over capitalism. See how the capitalists want to get out of the economic crisis. They reduce the maximum wages of workers. They reduce the maximum prices for raw materials. But they do not want to reduce the prices of mass-produced industrial and food products in any serious way. This means that they want to get out of the crisis at the expense of the main consumers of the goods, at the expense of the workers, at the expense of the peasants, at the expense of the working people. The capitalists hem the bitch on which they sit. And instead of getting out of the crisis, its aggravation is obtained, the accumulation of new prerequisites leading to a new, even more brutal crisis is obtained. ”

Nothing like? The typical policy of capitalists, oligarchies and plutocracy. Russia in the 1990-ies became part of the Western world - as a cultural and economic periphery and raw materials appendage, the market for, in the first place, various debris, such as poisoned, spoiled food. Hence all the current problems of Russia - the crisis, the degradation and extinction of the population, the poverty of the masses, the overconsumption of the rich, etc. And as the capitalists are trying to get out of the crisis - at the expense of the population, doing nothing for a fundamental reform of the system from above, but remnants of socialist achievements. That is, instead of getting out of the crisis, its aggravation, accumulation of new preconditions, which already lead to the collapse of the system, social catastrophe, confusion and external invasion, is obtained.

Stalin understood very well that the West, the capitalist system, is a predator, a murderer and a ghoul. He said this: “... the backward are beaten. But we do not want to be beaten. No, we do not want! History the old Russia was, by the way, that it was continuously beaten for backwardness ... For military backwardness, for cultural backwardness, for state backwardness, for industrial backwardness, for agricultural backwardness. They beat him because it was profitable and it went away with impunity. Remember the words of the pre-revolutionary poet: “You are poor, you are abundant, you are powerful, you are impotent, Mother Russia.” These words of the old poet are well memorized by these gentlemen. They beat and sentenced: “you are abundant” - therefore, it is possible to profit at your expense. They beat and sentenced: “you are miserable, powerless” - therefore, you can beat and rob you with impunity. Such is the law of the exploiters - to beat the backward and weak. The wolf's law of capitalism. You are backward, you are weak - it means you are wrong, therefore, you can be beaten and enslaved. You are powerful - then you are righttherefore, you must beware. That is why we cannot be left behind any longer ... now that we have overthrown capitalism, and we, the people have power, we have a fatherland and we will defend its independence. Do you want our socialist fatherland to be beaten and that it lose its independence? But if you do not want this, you must in the shortest possible time eliminate its backwardness and develop the true Bolshevik pace in the construction of its socialist economy. There are no other ways. That is why Lenin said on the eve of October: "Either death, or catch up and overtake the advanced capitalist countries." 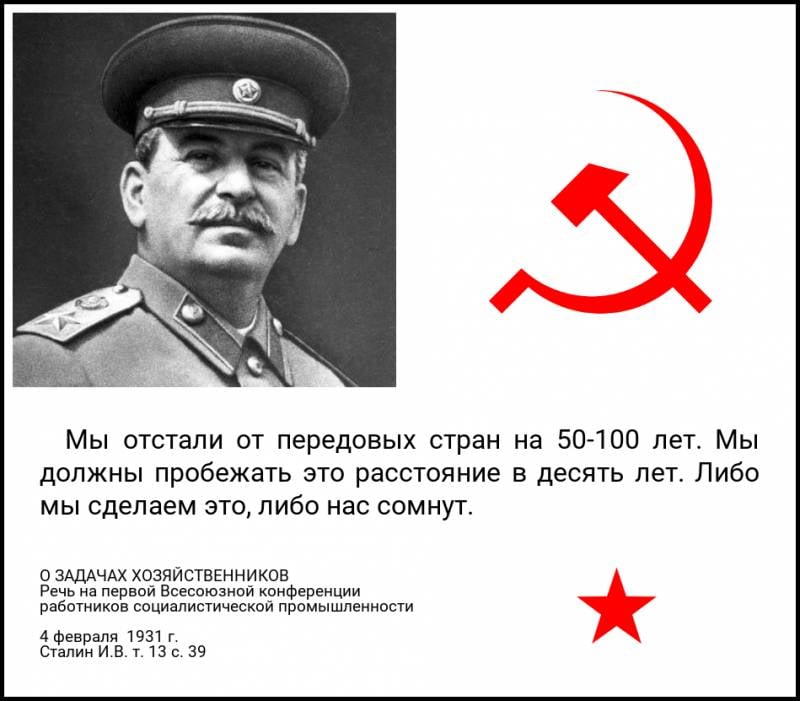 We fell behind the advanced countries by 50 – 100 years. We must make good this distance in ten years. Either we do it, or they will crush us. ”

Historical words! Extremely relevant today, in the era of globalization and digitalization. The daunting task is to overcome century-old backwardness in ten years with one jerk and repel an external threat. Then the Stalinist, Soviet Russia decided this task! How to solve the problem of dealing with the internal enemy.