November 19, 2018
11
This week, the level of shelling continued to decrease, and after the election of the heads of the DPR and the LPR, it decreased to the level of summer shelling. In just this week, the APU fired X-NUMX DNI times and X-NUMX LC. Unfortunately, even with such attacks, people continue to suffer. Five people of the DPR suffered from the shelling of the Ukrainian Armed Forces; 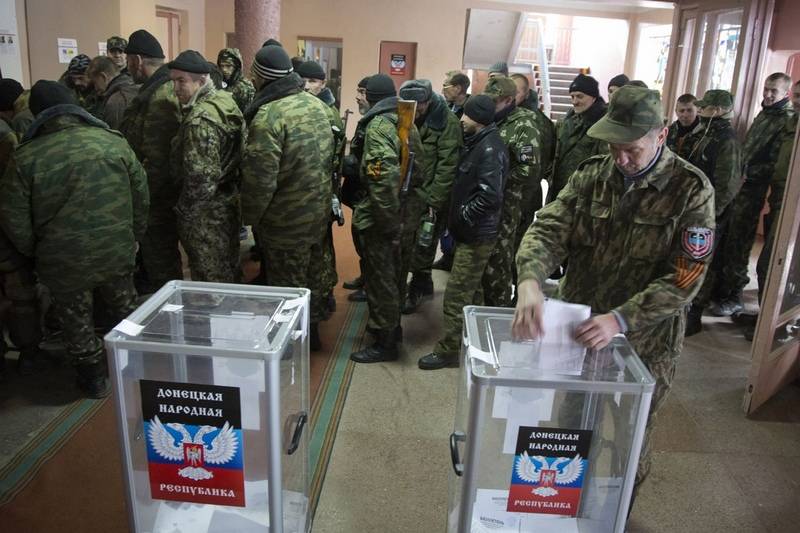 The election of people was significantly less than the election of the head of the DPR 11 November 2014 year. At least, judging by its site in the Kuibyshev district. Apparently, the fatigue from the war still affects, many have left to look for work in Russia. However, the elections took place. D. Pushilin was elected in the DPR, L. Pasechnik was elected in the LPR. The only thing that did not understand what salute? After all, it was not a referendum on returning to Russia. 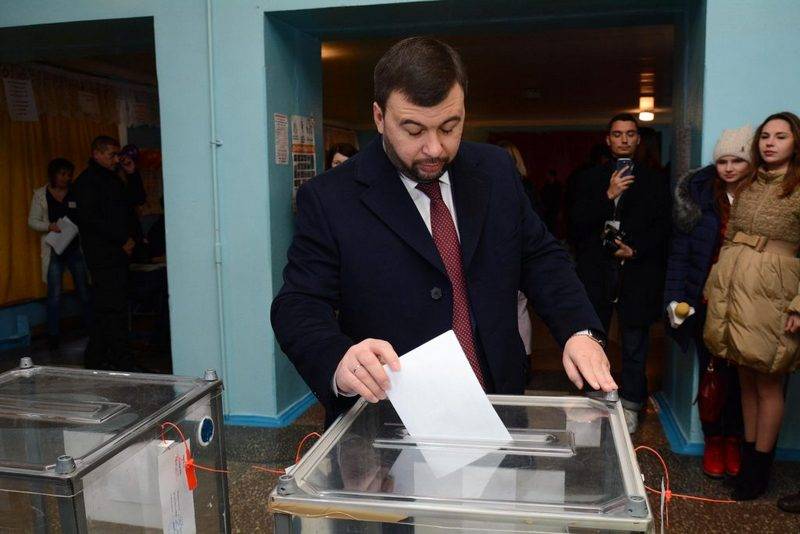 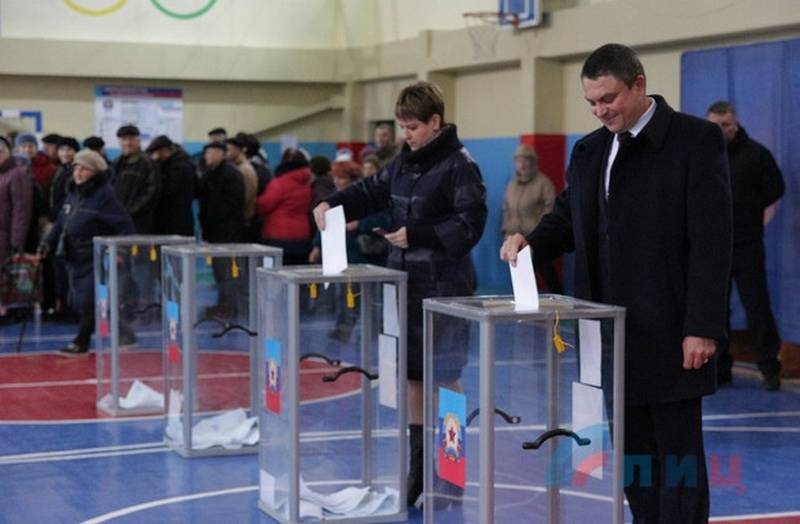 On November 9, while drinking alcohol in the 92 Brigade division, the servicemen decided to continue marking the upcoming departure from the front line, for this they sent two fighters for an additional portion of alcohol in the village. Verkhnetoretsky. When returning back, the servicemen deviated from the established route and exploded on their own to me. As a result, one would-be warrior died, the second was seriously injured.
November 10, air defense units NM DPR destroyed one enemy UAV near the airport in Donetsk.
11 November, the current year on the positions of the Supreme Court of Ukraine in the first line of defense in the area of ​​the settlement Marinka, as a result of an explosion at his own minefields, the fighter of the 28 th brigade of Kremenko soldiers was killed.

Intelligence has been obtained new data regarding the disappearance of October 27 2018, the OSCE CMM UAV.

Thus, in the period from October 29 to November 10 of the current year, the work of the commission, led by representatives of the General Staff of Ukraine, was identified in the area of ​​responsibility of the 28 brigade. It consisted of officers of the Armed Forces of Ukraine and technical specialists of UkrOboronProm, who were engaged in the initial study of the “lost” UAV of the OSCE SMM, including the deactivation of the systems and sensors tracking the location of the device.
At the moment, the UAV is in the headquarters of the 28 th brigade in the village. Kurakhovo, and in the coming days will be removed from the zone "EP".
The transportation of the UAV is assigned to a number of officials headed by the head of the intelligence department of the 28 Brigade Lomak M.M., who was personally assigned by Naev to deliver and transfer the aircraft to the research institute at Antonov State Enterprise. It is assumed that representatives of industry will be engaged in further study of the device, for the illegal use of patented Western technologies in creating their own UAVs.
According to the data we have, today, on November 16, the drone is scheduled to be transported to the Kurakhovo railway station on a ZIL-131 truck with the registration mark 4649 Р5 accompanied by three escort vehicles. Then the UAV will be delivered by rail to its destination in the capital Square. Traditionally, the blame for the "downed" drone will be entrusted to our forces.
On the Gorlovka direction, starting from November 7, as a result of the use of electronic warfare by the enemy, in the area of ​​Pantelemonovka (2 km from the village of Korsun, where the OSCE UAVs were jammed), malfunctions in the work of cellular communication and television and radio broadcasting, as well as appeals of civilians to district medical institutions with headache complaints.
Our intelligence recorded the arrival in the area of ​​the settlement. Kalinovo (17 km north-west of Donetsk) heavy artillery weapons from the brigade artillery group of the 57-th motorized infantry brigade. Currently, 18 units of 152-mm howitzers, 12-12 units of X-NUMX guns of 100-mm and 6 units of the Grad-Assault Units MLZ are masked in the hangars of agricultural buildings on the western outskirts of the village. 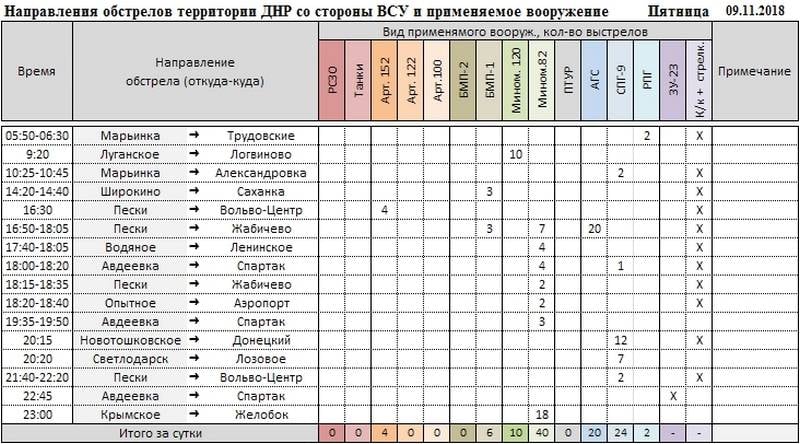 Over Friday, the APU fired at DNR 22 times.
LC on Friday fired 4 times.

On Saturday, the Armed Forces of Ukraine fired at the DPR 11 once, one serviceman of the DPR NM was wounded.
Over the past day, the APU fired at LC 2 times.

According to the Ministry of Defense of the DPR, on Sunday, the Armed Forces of Ukraine fired at the territory of the republic 7 once, one serviceman of the DPRM NM was injured
On Sunday, the APU fired at LC 2 times.

According to the Ministry of Defense of the DPR, on Monday, the Armed Forces of Ukraine fired at the DPR 11 once, one soldier of the DPR NM was wounded.
In the LC, there was one shelling per day.

According to the MO of the DPR, on Tuesday, the Armed Forces of Ukraine bombarded the DPR 17 times (the table above may not indicate firing, where only small arms were used weapon).
Over the past day, the APU fired at LC 1 times. 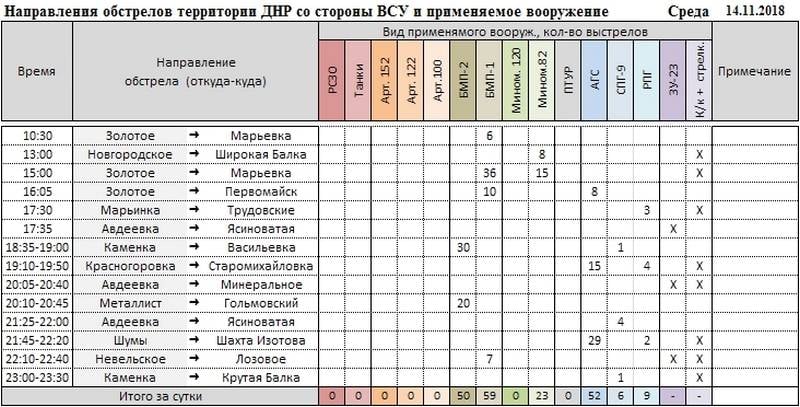 According to the MO of the DPR, on Thursday, the Armed Forces of Ukraine fired at the DPR 17 times (the table above may not indicate firing where only small arms were used).
During the day, the APU fired at LC 3 times.

In just a week

APU fired DNR 90 times. wounded four servicemen of the National Assembly of the DPR and one civilian in the republic.
In the areas of twenty settlements of the Republic, the enemy applied 122-mm caliber artillery, firing nine projectiles, also used 120 and 82-mm caliber mortars, firing sixty-seven mines, of which thirteen 120 mm caliber, used BMP weapons, grenade launchers, large-caliber machine guns and small-caliber guns. weapon As a result of shelling from the side of Ukrainian terrorists, in the week four houses were damaged in the settlements of Dolomitnoye, Zaytsevo and Golmovsky.

APU fired at LC 16 times.
In total, over 266 mines and shells were fired throughout the Republic. The area of ​​the village of Lozovoe, Logvinovo, Kalinovo, Pervomaisk, Maryevka, Zolotoe-5, Donetsk, Zhelobok came under fire from the Ukrainian security forces. 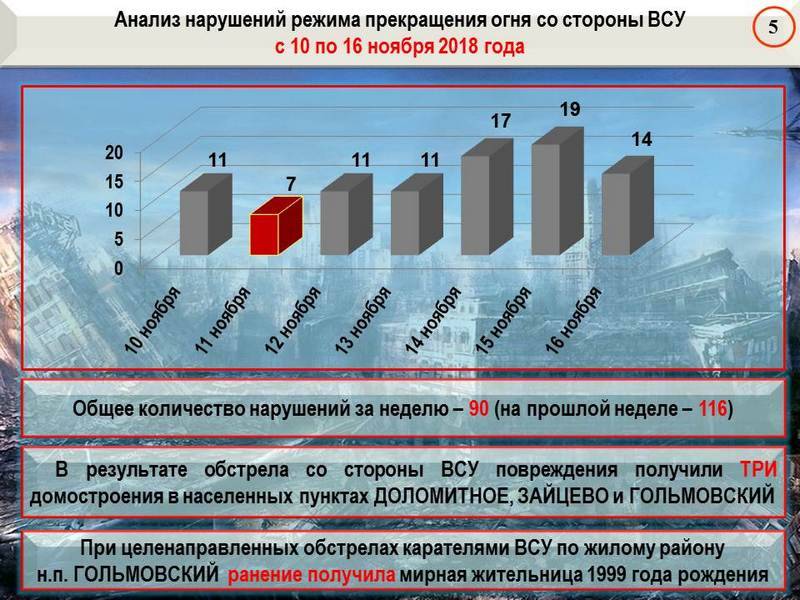