Powerful shock complex under the guise of C-300. Will it be possible to deceive the aerial reconnaissance of the US Navy?

November 19, 2018
19
The last aerospace exhibition "China International Aviation & Aerospace Exhibition 2018", held in Zhuhai, China from November 6 to 11, 2018, surprised its visitors with a unique exposition of numerous concepts of promising strike reconnaissance drones and tactical missile systems from leading aerospace giants and young companies of the Celestial Empire, continues to excite Western European and American military-analytical blogs with the appearance on its fields of a launcher demonstrator of a rather extraordinary and "insidious" operational-tactical missile system WS-600L. Already after the first photograph of this product, published in the photo reportage by Mikhail Zherdev, numerous observers and fans of military equipment were misled about the classification of this bizarre weapon system. And this is absolutely not surprising, because at first glance they saw a classic launcher with four cylindrical transport and launch containers designed for storage, transportation and vertical "mortar launch" (using squibs) of HQ-9 or 48N6E / DM anti-aircraft missiles of HQ complexes -9 and S-300PMU-1/400, respectively. 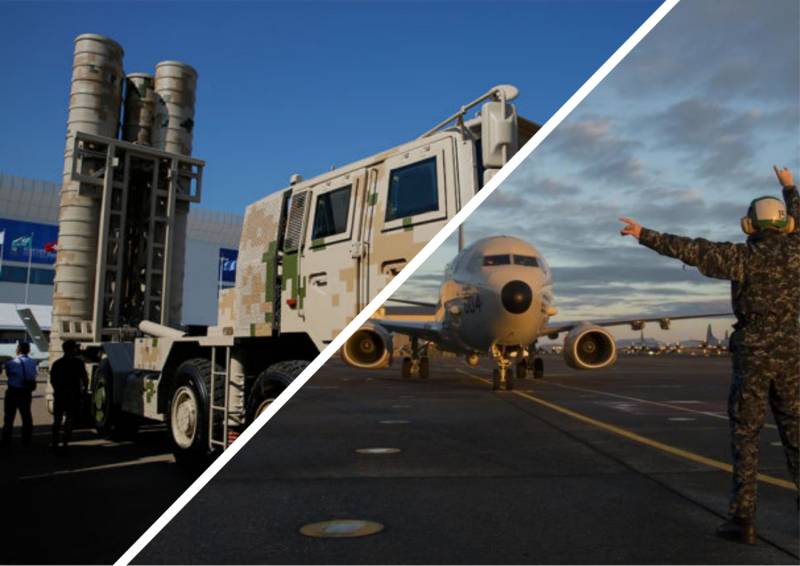 Nevertheless, the shock mission of the WS-600L complex can be judged by several details that are noticeable to specialists. First, the layout of the aerodynamic planes of the same-name rocket, the layout of which was placed next to the launcher: 4 X-placed short shortened stabilizer wing of small elongation, shifted to the tail section of the WS-600L hull (the same position is observed at “Point-U” ), as well as 4 small tail aerodynamic steering, the area of ​​which is significantly less than the area of ​​the rudders of anti-aircraft missiles such as 48Н6Е or HQ-9. Conclusion: WS-600L high speed (3000 — 4000 km / h) on the descending branch of the trajectory at an angle of 70 — 80 and more will be enough to perform anti-aircraft maneuvers even with small aerodynamic control surfaces. Such design features are characteristic of operational tactical ballistic missiles. Also in the nozzle block of the WS-600L layout are visible tungsten “plane-blades” of the gas-jet rudders of the deflection vector deviation, which provide the OTRD with decent maneuvering capabilities on the ascending branch of the trajectory during the operation of the solid propellant rocket engine. The gas jetting system is the only link that makes WS-600L related to some modern anti-aircraft missiles.

Secondly, this is the “expanded” cockpit of the WS-600L PTRC (in comparison with the cabins of the HQ-9 anti-aircraft missile systems and the 5P85C / SE2 C-300М1 / 400 PU). Unlike anti-aircraft missile launchers, which automatically receive radio commands via a telescopic antenna behind the driver’s cabin, commands to launch from the 30H6E and 54K6E radar and guidance radar, the combat use of operational-tactical missile systems launchers provides for independent processing. tactical information from friendly optical-electronic, radio engineering, and radar reconnaissance systems as well as oyaschih staff units. Naturally, for this, the WS-600L crew must be represented not only by the driver, but also by the operator of the topographic location and navigation system, as well as the commander, who will receive target coordinates at the multifunctional terminal, as well as comprehensive information on the tactical situation (including enemy air defense systems) parameters) on the segment of the theater where the flight path of the ballistic missile WS-600L will pass. As you can see, the configuration of the calculation, and hence the design of the cabin, when viewed in detail here is completely different.

We were interested in a much more important question: what tactical advantages will open to PLA units after gaining operational operational readiness of the WS-600L OTRK? If you do not rely on detailed reviews, then we have a combat unit whose appearance is almost identical to the HQ-9, S-300PS / PM1 air defense launchers both in the marching and standby and in combat positions. This primarily concerns the effective reflective surface of the WS-600L self-propelled launcher, as well as its infrared signature and silhouette in the television range. Imagine another increase in tension around the disputed island archipelago of Spratly or the Paracel Islands in the South China Sea. It is logical to assume that, as part of the support of the Vietnamese side, the command of the 7th operational fleet The US Navy will send AUGs, as well as P-9A Poseidon long-range anti-submarine aircraft, often used by the Pentagon for strategic optoelectronic and radar reconnaissance of enemy targets, to the “8 dotted line” (exclusive economic zone of the Middle Kingdom) region. In response to this, the PLA command will deploy in the disputed islands not only additional HQ-9 batteries or those in service with the S-400 and S-300PMU-1, but also the latest WS-600L OTRK. This is where the fun begins.

Despite the fact that the Poseidon P-8A operators use the highly advanced on-board radar system AN / APY-10 (AN / APS-137D (V) 5) for reconnaissance, which is capable of receiving a radar image of the terrain in the reverse synthetic aperture mode (ISAR) with a resolution of 1 m, as well as classify coastal units at a distance of about 100 km (defining their silhouettes and radar signature), clearly identify the PU of the operational tactical missile system WS-600L, and distinguish it from the HQ-9 or 5P85C radar launcher APY-XNU MX will not be able to. After all, in order to see minor design differences, the resolution of the radar should be from 10 to 0,3 m, to which the parabolic antenna APY-0,5 is incapable. Moreover, the Chinese army is equipped with modern EW facilities that can easily suppress the working X-range of the Poseidon radar.

Naturally, in the pre-escalation period, fighter aviation The Chinese air forces will prevent the operation of US aerial reconnaissance equipment near its air borders over the disputed islands, and the Pentagon will remain completely unaware of the exact location of the WS-600L until the first combat launches. Excite the nerves of the US Navy command in all this stories the fact that the WS-600L operational-tactical ballistic missile is yet another anti-ship tool capable of breaking through to the aircraft-carrier formations through the unexplored and beyond the ship's missile defense capabilities, the quasi-ballistic trajectories familiar only to our Iskander and Daggers.