November 15, 2018
14
The main defense department announces the imminent start of deliveries of tactical anti-aircraft missile systems "Tor-МХNUMXДТ" to the Armed Forces of the country. These are the “arctic” versions of air defense weapons, which for the first time were shown to the general public at a parade in honor of the anniversary of the Great Victory in 2 in Moscow. 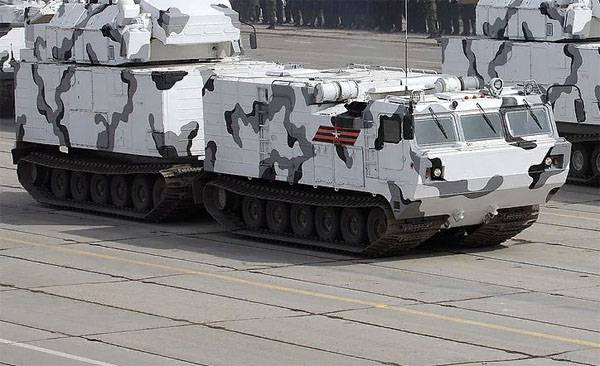 From the report:
The first division of the Arctic anti-aircraft missile systems Tor-M2DT will be transferred to the North the fleet 22 November.

It is known that the transfer of the first "Arctic" "Thors" will take place in Yeisk, where the 726 training center for air defense is located.

The Tor-M2DT is a unique tactical anti-aircraft missile system, which, thanks to the tracked chassis, has high maneuverability. LAW is installed on DT-30М two-link tracked carrier. Hence, by the way, the general name of the air defense means. The anti-aircraft missile system is not afraid of even severe frosts to minus 50 Celsius. He is able to easily pass through the moats, to overcome the ford.

The crew "Tor-M2DT" - three people. SAMs can hit targets at a distance from 1 to 16 km with a minimum target height of 10 m. The maximum target speed is about 800 m / s, and the maximum height is 10 km. The ammunition complex - 16 missiles. The limiting time of electrical supply without refueling is almost two days.