November 25, 2018
27
Acquainted with the armor of the Sengoku era, we again return to the personalities. And again, we face the life and fate of Tokugawa Ieyasu, who eventually became a deity. But in life it so happens that happiness and unhappiness in it constantly go hand in hand.


In 1579, on the orders of Oda Nobunaga, Ieyasu was forced to execute his wife, and offered to his eldest son seppuku. The reason is a suspicion of conspiracy against the father and conspiracy with the tribe of Takeda. History this tragedy is covered in darkness. Some believe that all this was made up specifically to blacken Ieyasu in the eyes of Nobunaga, others that he had reason to doubt the loyalty of his son and wife Sena. Anyway, Nabunaga showed his power: at his insistence, Ieyasu ordered his son to execute his wife, and to commit suicide himself. Sena was killed by samurai Ieyasu. After that, he proclaimed his third son, Hidetada, as his heir, and the second was adopted by anxious continuation of a kind of Toyotomi Hideyoshi. 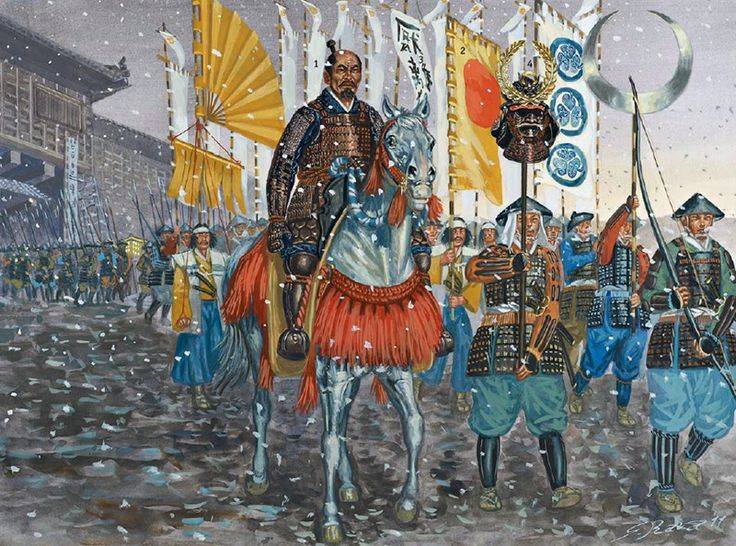 Tokugawa Ieyasu on the battlefield of Sekigahara. Fig. Giuseppe Rava.

On the other hand, the military campaign of Oda and Tokugawa against the Takeda clan, which began in February 1582, was more than successful. Already a month after the outbreak of hostilities, having lost the finances, allies and combat generals of his father Takeda Katsuri, together with their wives and children, made seppuku, after which the Takeda clan ceased to exist. For this, Ieyasu received Surda Province from Oda. 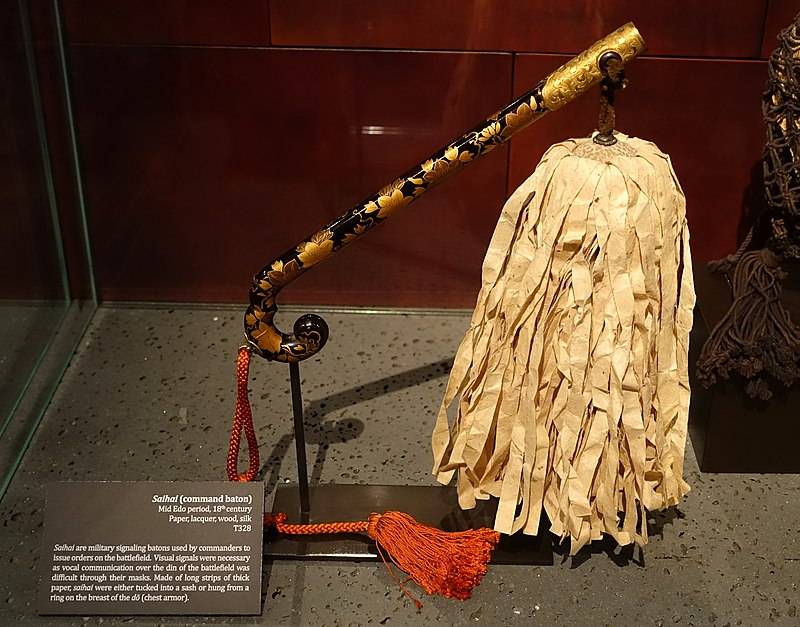 Rod of the commander sayai. Perhaps this was used by Ieyasu Tokugawa. (Anne and Gabriel Barbier-Mueller Museum, Dallas, Texas)

In May 1582, Ieyasu went to the residence of Oda Nobunaga - the luxurious and large Azuchi castle. And Nobunaga accepted him as a dear guest and personally (!) Served him at the table, which, I think, frightened him to death. Tokugawa was glad that when this visit was over, he remained alive and, with joy, went to inspect the commercial port city of Sakai. It was there that he learned about the revolt of Akechi Mitsuhide and the death of Nobunaga temple Honno-ji. And here Ieyasu again had a very hard time. After all, after his admission to Azuti, he was considered almost the right hand and Nobunaga's pet, and it is not surprising that Akechi decided to kill him! And it was not very difficult to do this, because Ieyasu was in a foreign territory and did not have enough warriors under his hands. But Tokugawa hired a ninja squad from the province of Iga, and they led him to secret mountain trails in Mikawa. Immediately upon returning, Ieyasu began to gather troops against Aketi Mitsuhide. By breaking an impostor, he would become the actual heir to Oda Nobunaga. But then he was ahead of Hasiba Hideyoshi, who defeated the rebels in the battle of Yamazaki. 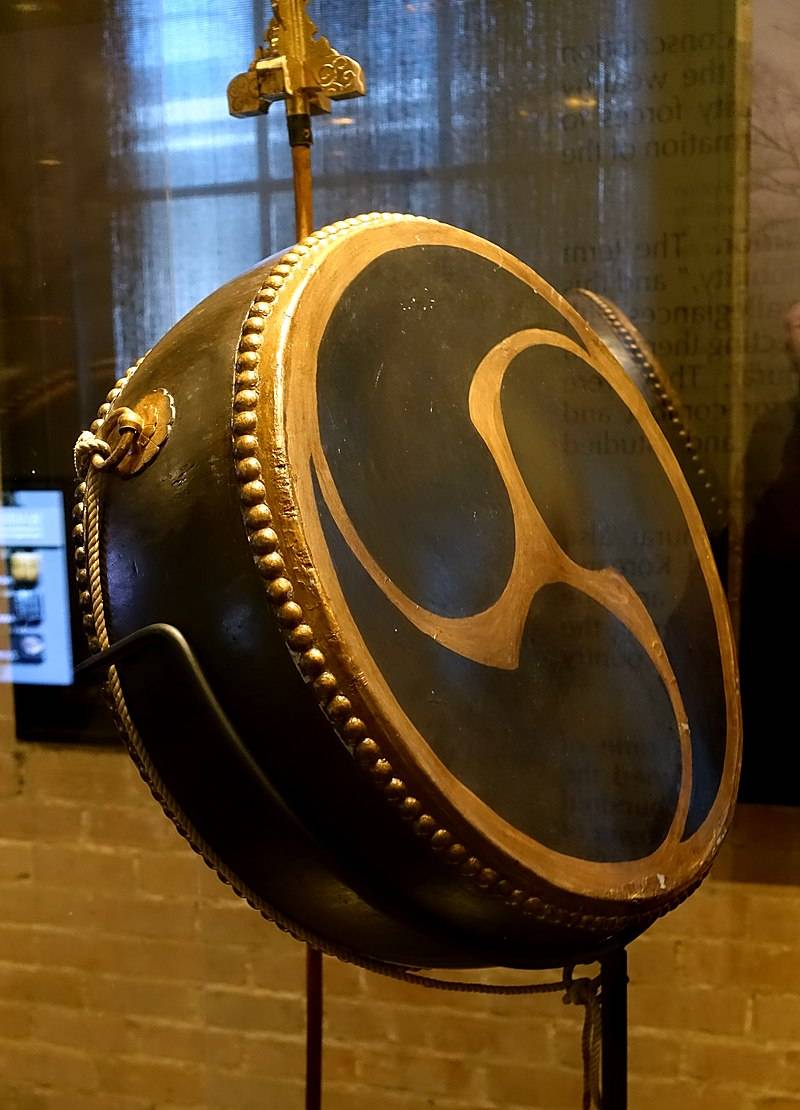 Dzindayko - "military drum", which the Japanese on the field Bole transmitted signals. On it, as you can see, the emblem of the clan is also applied! (Anne and Gabriel Barbier-Mueller Museum, Dallas, Texas)

However, it was not enough to avenge the death of Oda. The fact is that in the localities his administration, which did not respect local customs, was hated and, taking the opportunity, was immediately interrupted. So, in a number of provinces, a dangerous “anarchy” or power of quite small daimyo arose, which of course was intolerable for large daimyo. 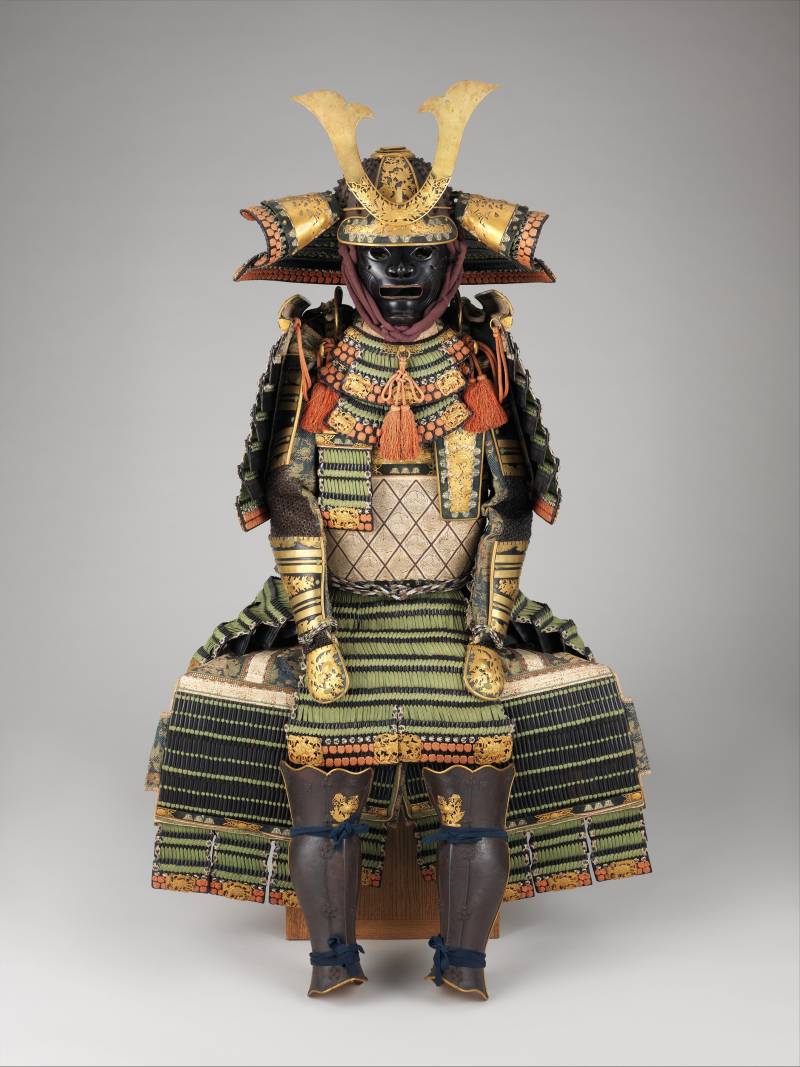 Classic armor of the ryoy, restored in the XVIII century. Already in the time of Ieyasu Tokugawa, no one wore such armor, but they were adorned in daimyo castles, demonstrating their nobility. (Metropolitan Museum, New York)

Ieyasu immediately moved to bring recalcitrant to ... obedience. But he also took into account local traditions. And most importantly, he showed respect for the late Takeda Shingen, although he was his worst enemy. Seeing this, many commanders and advisers of the deceased family of Takeda went to the service of Ieyasu, who in addition promised them to return the lands given to them by Shingan. Naturally, they are not looking for good from good, and yesterday's enemies immediately brought him an oath of loyalty. 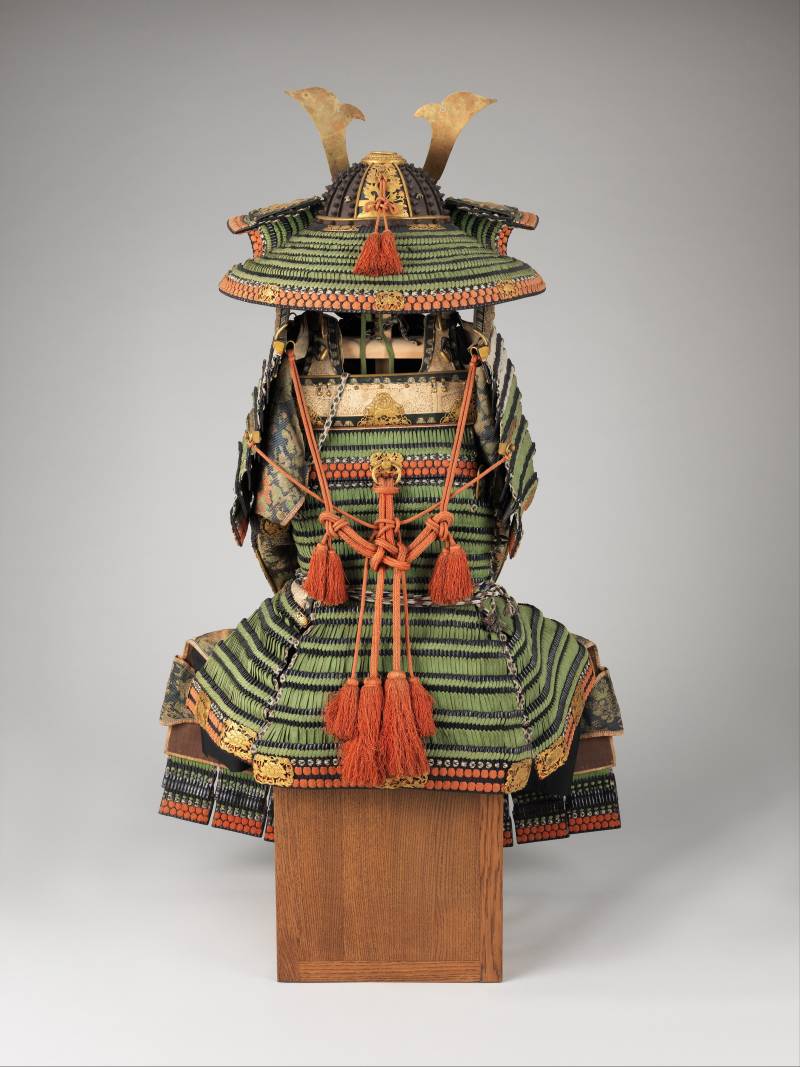 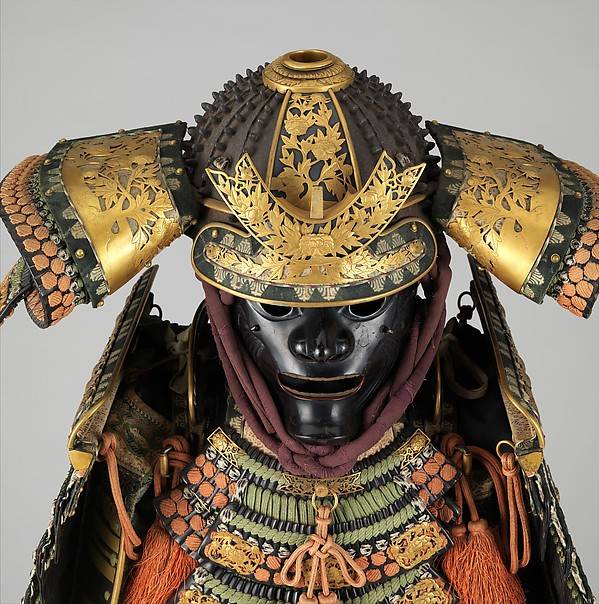 Helmet and mask from this armor. On the helmet horns - kuvagata removed.

True, the Uesugi and Go-Hojo clans also dug on the Oda lands. Their troops entered the three provinces, which Ieyasu already considered their own, and he had to start a war with them again. But fate here again favored the future deity, so that most of the land of the Takeda clan was inherited by Ieyasu Tokugawa. So in the end, the provinces of Kai, Shinano, Suruga, Totomi and Mikawa were under his authority. 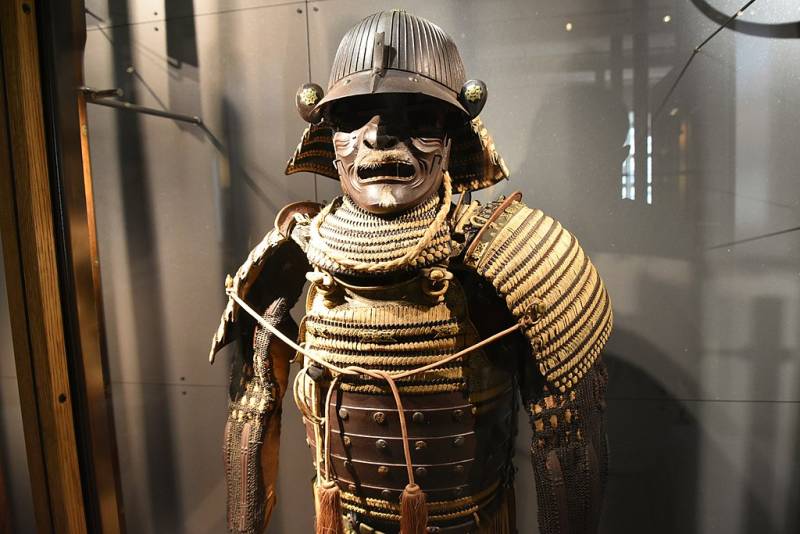 A lot of samurai armor hit the most diverse museums in the world. But it is clear that for the most part this is just the armor of either the Sengoku and Edo eras. (Royal Arsenal, Copenhagen)

Now it was necessary to begin preparations for the war with the arrogant peasant Hasiba Hideyoshi, who already in 1583 had defeated the forces of all the oppositionists opposing him and became the actual successor of the Nobunaga case. Dissatisfied, and they are always there, just silent for the time being, they immediately declared him a usurper and offered an alliance to Ieyasu. And he agreed, which led him to war against Hideyoshi. 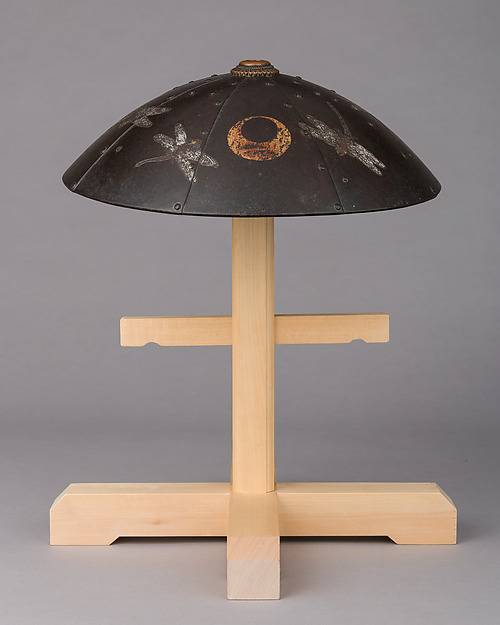 In March 1584, the combined forces of Tokugawa and Hideyoshi met on the lands of Owari province. Moreover, Hideyoshi had 100 thousands of people, but the forces of Tokugawa and his allies did not exceed 50 ... Nevertheless, in the battle of Haguro 17 in March 1584, Hasib Hideyoshi’s cumbersome and poorly controlled army failed to defeat Ieyasu. Hideyoshi was so frightened by the military genius Ieyasu that he stopped the attacks and took up a defensive position. But then his patience snapped, and he sent a squad under the command of his nephew Hasib Hidetsugu against Tokugawa to an 20000 man. There was a battle with Komakki-Nagakute and in it Ieyasu not only defeated the enemy army, but also forced its commander to flee from the battlefield in disgrace. 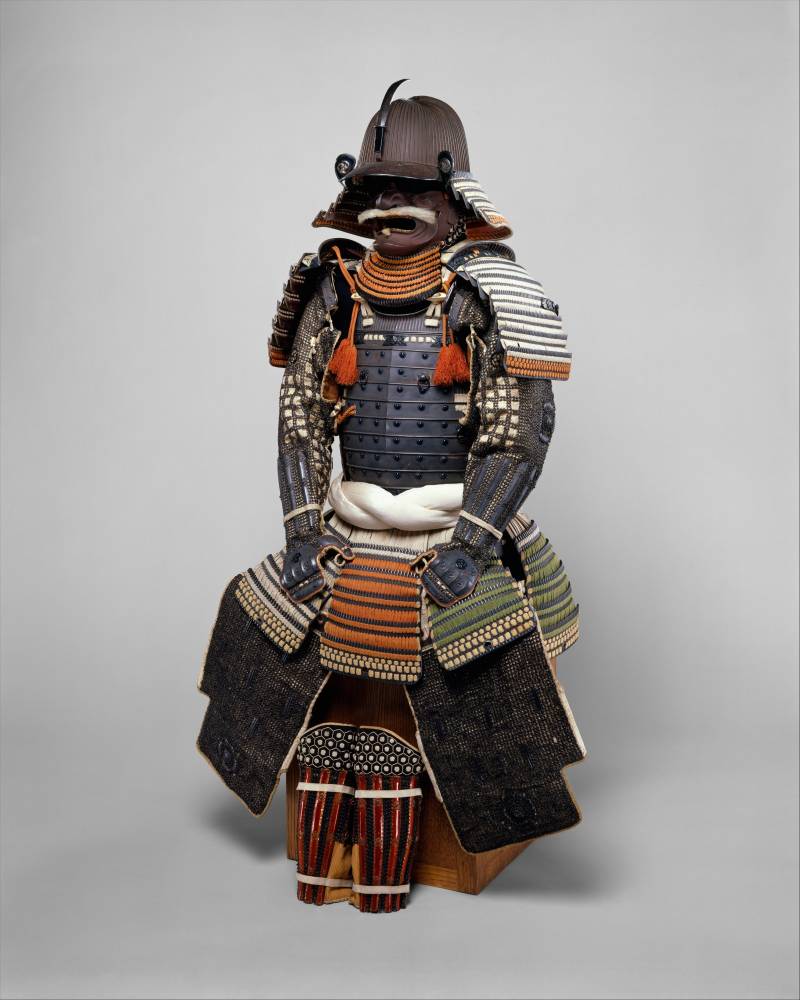 Bocakari-do armor — that is, with an okegawa-do cuirass, on which the heads of the rivets are visible. Typical armor of the Sengoku era. (Metropolitan Museum, New York).

Then Hasiba Hideyoshi attacked ally Ieyasu Oda Nobuo, defeated him and in November 1584 of the year forced him to sign peace with him, and recognize his vassal dependence. Ieyasu saw that he was losing allies in this way, "remembered" that both he and Hideyoshi both faithfully served Nobunage, and immediately made a truce with the enemy. Moreover, Hideyoshi was sent hostage by his grandson. That is, he recognized the dominant position of the latter, formally, he continued to remain independent. 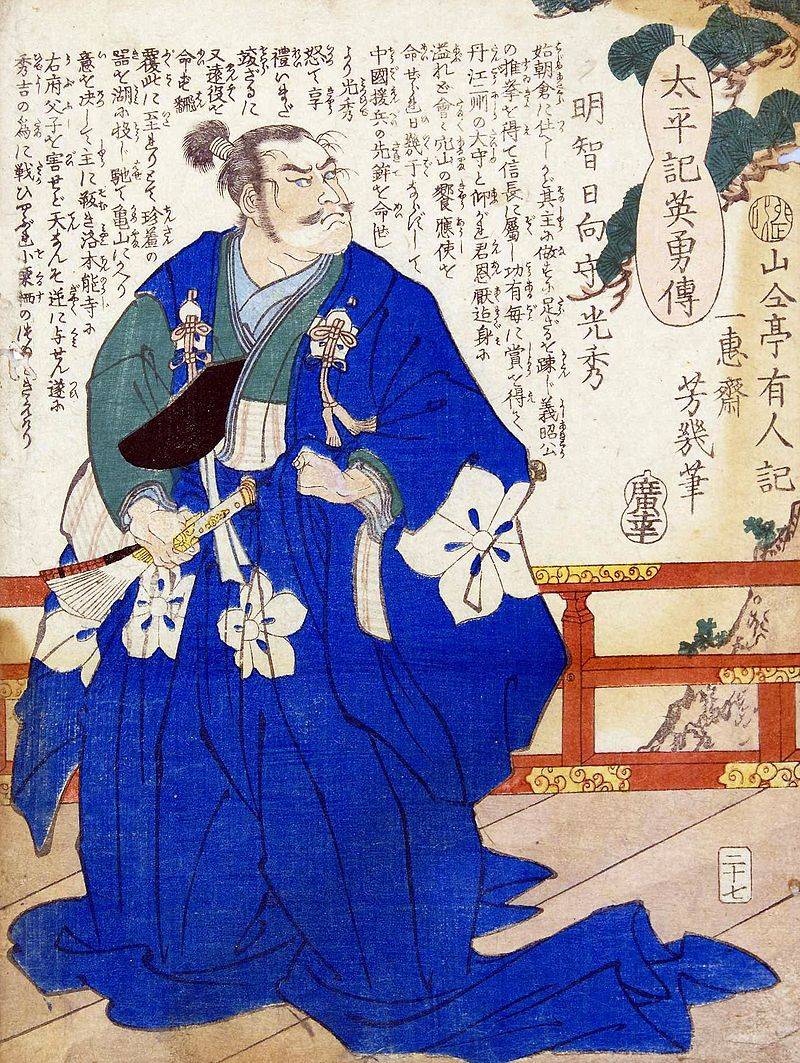 It ended with the fact that now the quarrel began between his own vassals. Some demanded that Ieyasu continue the fight with Hideyoshi, others demanded that he recognize his suzerainty. Thus, Ieyasu fell into an extremely difficult situation: his vassals began to come out from under his power, and here on the nose was a new war with Hideyoshi. He, however, was in no hurry to fight, and in April 1586 of the year married his sister Asahi to Ieyasu. Tokugawa accepted a new wife, but did not recognize vassalage. Then Hideyoshi decided on extreme measures: in October of the same year, he sent his mother to Ieyasu as a hostage, asking only one thing - to recognize his sovereignty.

And Tokugawa thought, thought, remembered the Japanese proverb - “that which is bent may straighten,” and agreed to recognize the primacy of Hasiba. 26 October 1586, he arrived at his residence in Osaka, and the next day, during an audience with Hideyoshi, he bowed before him and officially asked him to accept him "under the strong hand of the Hasiba family." That is, he bent in front of the “peasant”, whom he did not respect, and he simply hated, of course, but ... he gave due credit to his mind and strength and believed that the time for his destruction had not yet come!

Real power always forces one to be reckoned with. Therefore, it is not surprising that Hideyoshi first received from the emperor the aristocratic surname of Toyotomi, and then in September 1587, he also asked for the position of adviser from the imperial court for Ieyasu and thanked him for acknowledging his supremacy. Then he, along with Ieyasu, decided to destroy the Go-Houjou family.

Once they decided - it means they did it, so now it would be possible to characterize the increased capabilities of these two rulers. And in 1590, the troops of Toyotomi Hideyoshi and all his vassals, including the Ieyasu army, with a total number of people in 200000, surrounded the citadel of Go-Houjou and after several months of siege were able to take it. Hideyoshi gave the new lands of Kanto province again to Tokugawa, but instead took his old ancestral possessions. The benefit was seemingly obvious, since the new lands gave him more income, but Ieyasu's power there was not too fragile, since for the local nobility he remained both a stranger and a conqueror. In addition, many lands here were empty, and transport communications were absent. However, here Ieyasu showed himself from the best side already as an administrator. He raised the regional economy, repaired the roads, built safe castles and opened many ports on the coast. In just ten years, a powerful economic base arose here, which subsequently ensured him victory in the struggle to unite the country, and then even became the new center of political life in Japan. 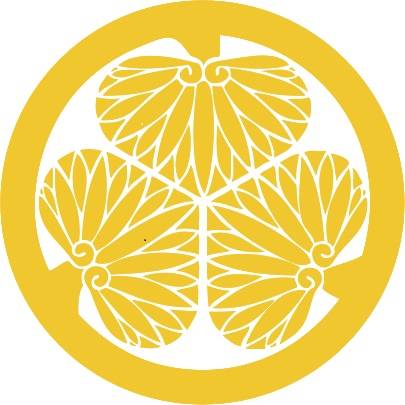 In 1592, Toyotomi Hideyoshi decided to start a war in Korea. Many samurai rushed to Korea, hoping to gain fame there. Hideyoshi was endowed with killing many there and trying to send Ieyasu Tokugawa there. But he managed to avoid being sent to the war, explaining that he needed to end the war with the "remnants of the Go-Houjou family." Finally, before his death in September 1598, Hideyoshi created the Board of Trustees of the five elders with his son Toyotomi Hideyori, and put Ieyasu Tokugawa at his head, who promised to support the Toyotomi clan after the death of his head. 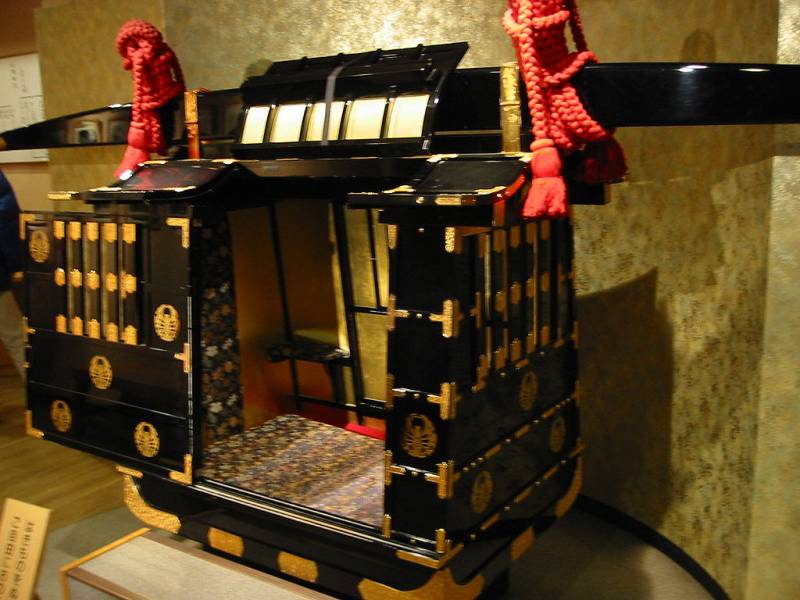 In such a luxurious palanquin, daimyo was worn in Japan. (Museum of Okayama Castle)

On September 18, Toyotomi Hideyoshi died on 1598, and his five-year-old son Hideyori immediately found himself in the position of the country's formal ruler. But instead of him, of course, the Council of Five Elders and the Council of Five Governors immediately began to rule. Since Ieyasu was the most influential member of the Council of Elders, he immediately decided to take advantage of weakening the kind of Toyotomi in his own interests. He made alliances with the daimyo who, during his lifetime, opposed Hideyoshi, and began to intensively prepare for war. 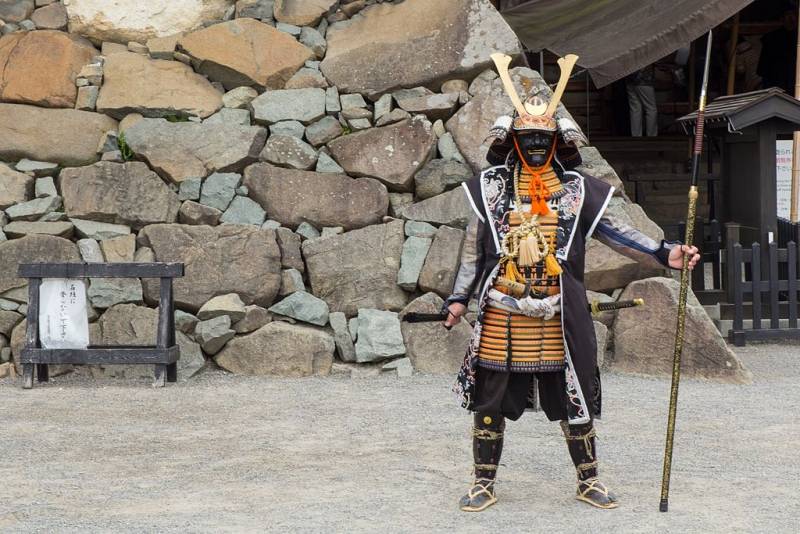 All this resulted in the conflict and Isis Mitsunari. It looked like a dispute between the vassals of Toyotomi, but in fact it was a confrontation between Tokugawa Ieyasu, who wanted to become a shogun, and Isida Mitsunari, who wanted to save power for young Toyotomi Hideyori. 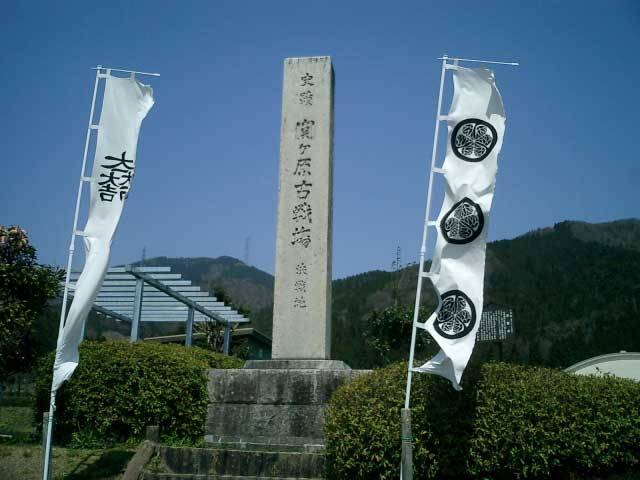 Monument at the battle site of Sekigahara. On the left is the Mitsunari flag, on the right is Tokugawa.

October 21 1600 in the "month without gods" of the army of Tokugawa and Isis met on the Sekigahara field. The battle between them ended in complete victory for Ieyasu. Ishida Mitsunari, along with his generals, was captured and executed. Tokugawa Ieyasu became the de facto ruler of Japan.