Many media recently drew attention to the amazing project of the French submarine. As experts rightly point out, submarines are not the direction where many technological revolutions can now be found. However, the Naval Group engineers did their best to leave the competition behind. The concept of SMX 31 has become one of the most unusual ideas of our time. We are talking about the most inconspicuous multi-purpose boat with a multi-hull structure having a non-nuclear power plant built on the basis of electrical devices. Outside there will be a light hull of an unusual “bionic” shape that will make the submarine look like a whale. Due to such a decision, in particular, they want to achieve the best flow around during the movement and, of course, reduce visibility to the maximum. There is no cutting (in the usual form), only the rudders and a number of other small structures come out of the hull. 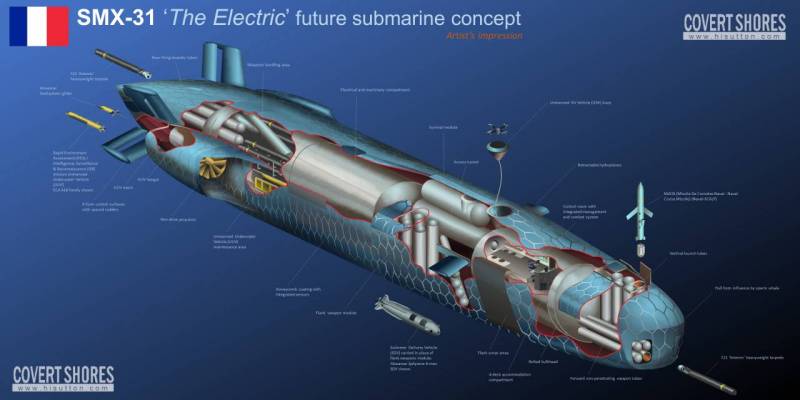 It is worth saying that this is far from a small submarine, although it is noticeably smaller than such large multipurpose boats like the Ash Tree. According to reports, SMX 31 will have a length of 70 meters. The estimated displacement in the submerged position - 3400 tons. The most amazing thing is that due to the wide automation, the crew should be only fifteen people.

This unusual ship was presented by the French company DCNS at the naval exhibition Euronaval-2010. Its main feature is that it combines the features of a surface ship and a submarine. That is, it is about combining the best qualities of these two types of military equipment. According to the designers, the gas turbine power plant with three water-cannons will allow the SMX-25 to accelerate at the surface to a speed of almost 40 knots (approximately 70 km / h), which is comparable to the performance of a number of surface ships of modern times. Having reached the combat area, the SMX-25 will be able to dive and act covertly, like a conventional submarine. 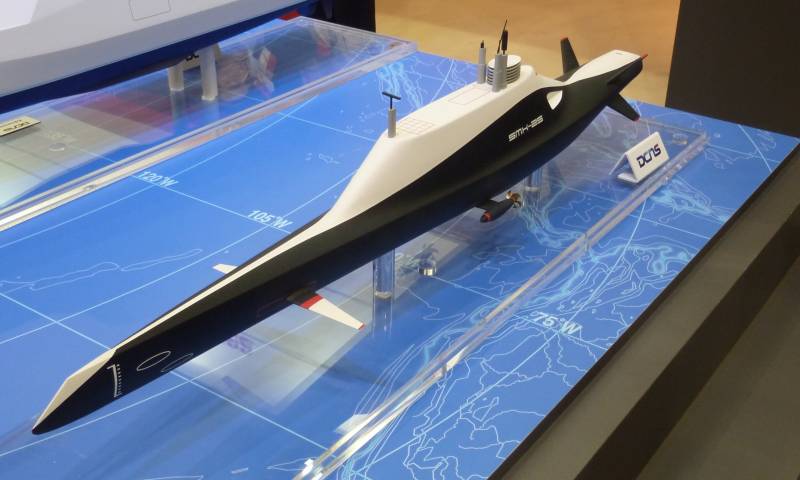 Alas, the speed in the submerged position is not impressive: only ten knots, which cannot be compared with modern submarines. The length of the ship is 110 meters, and the underwater displacement is 3000 tons. They want to supply the boat with sixteen multifunctional rockets capable of hitting surface, submarine and ground targets. Also the ship will receive torpedo tubes. Crew - 27 man.

One of the most unusual concepts of the Euronaval-2012 was the super-small submarine SMX 26, which was offered by the very same DCNS. The submarine will have a length of 39,5 meters and a width of 15,5 meters. The highest underwater speed will be 10 nodes, and autonomy - up to 30 days. The main feature of the SMX-26 will be the ability to operate in shallow coastal areas, where the usual large submarines have absolutely nothing to do. For greater efficiency, the submarine was even equipped with wheels. It is assumed that, in sum, with its small dimensions, this will allow it to act at depths less than fifteen meters, attacking targets when they expect it to last. For effective combat with boats and ships, the SMX 26 received two heavy and eight light torpedoes. To increase the firepower in the fight against surface targets intended retractable 20-mm gun. Also, the submarine will be able to carry up to six combat swimmers. 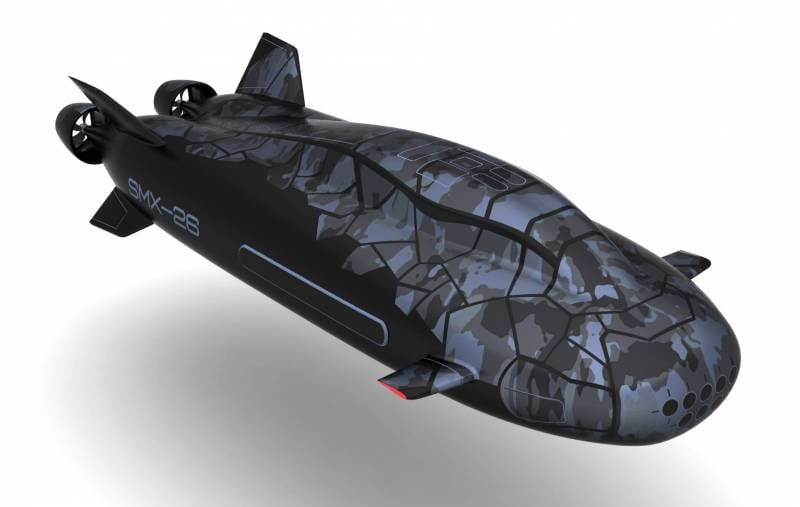 It is important to note that the submarine will be able to receive air and recharge the batteries with the help of hoses emitted to the surface. The main power plant drives two propellers. In addition, there are four additional retractable thrusters that increase maneuverability.

According to Popular Mechanics, researcher H. Sutton (HI Sutton) not so long ago found information about the American submarine with the symbol Sub 2000, an article about which was previously posted by the rear admiral of the US Navy Malcolm Fages. Note that Sutton is the founder of the Covert Shores Navy resource and the author of the book World Submarines: Covert Shores Recognition Guide.

According to him, we are talking about a multi-purpose submarine, which has ample capabilities for conducting reconnaissance. Apparently, its length "in the gland" may be 80 meters. According to available data, the boat was to receive a double-hulled architecture, which is very uncharacteristic of American shipbuilding, preferring single-hulled boats. Allegedly, they wanted to equip the submarine with an X-shaped steering system and, most likely, a new-generation jet propulsion unit, which should contribute to its maximum stealth. The boat has torpedo tubes mounted on the sides, twelve vertical launchers for cruise missiles, and can also use a mini-submarine for reconnaissance.

It is worth noting that there is no evidence of the veracity of the real existence of the project, but even if it was actually worked out in the States, it probably disappeared long ago. Now the US Navy has completely different priorities, and the Americans see the promising multipurpose submarine rather as “Sivulf” number two: large, powerful and expensive. In turn, the Sub 2000 is in many ways closer to the cost-effective Virginia.

The Nautilus 100 looks like an incredible concept and introduced the Royal Navy to 2015. It is assumed that this giant “ramp” of the distant future will be able to withstand the depth of 1000 meters, and its maximum speed will reach incredible 150 nodes (or 270 kilometers per hour). The crew of the submarine - twenty people. The submarine will be able to use hydrogen-electric engines for movement at cruising speeds and the "tunnel", which passes water through itself with the help of a fan and allows it to pick up such a high speed. The crew will be able to adjust the depth of the dive with the help of movable flexible wings. "Cherry on the cake" is to control the boat using a neural interface, when the submarine can literally read thoughts. 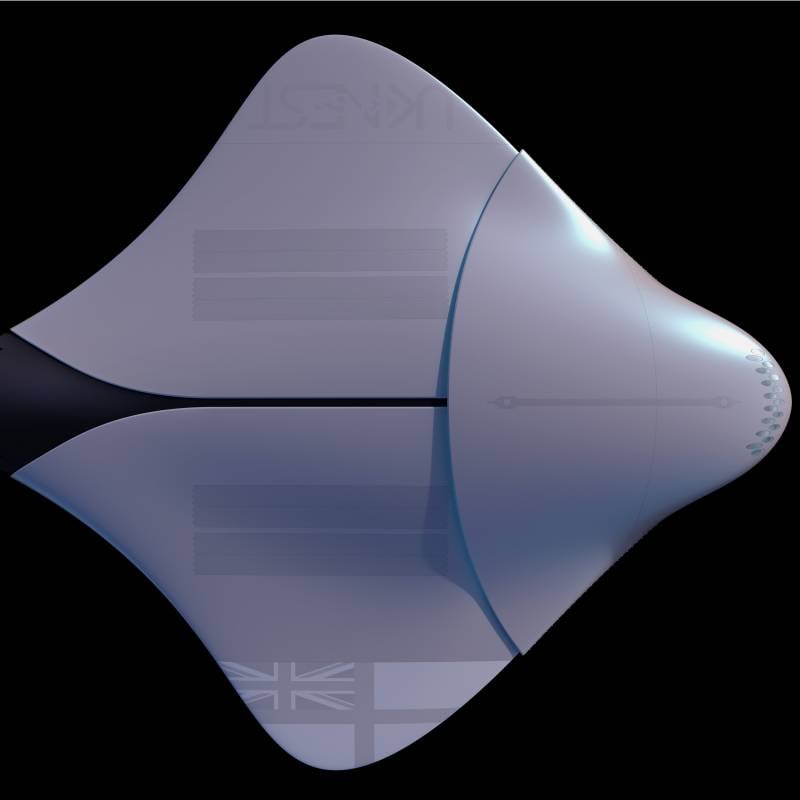 But all this, of course, is very far from reality. Especially the reality of british fleet, where cost savings led to the abandonment of catapults aboard new aircraft carriers such as the Queen Elizabeth, reducing their actual capabilities to the level of American landing ships or even lower.

In general, it must be said that the chances for the implementation of at least one of the above concepts are small. Europeans and Americans simply showed how separately taken technical solutions of the future can look like. It is impossible to exclude that one of them will be embodied on the submarine of the XXI century, which will appear, say, in 30 or 40. But certainly not now and not even in ten years.