November 14 2018
92
From mid-August 2017 news blocks of numerous Russian, West European and American military analytical portals were flooded with information about the conclusion between the Romanian Ministry of Defense and the Lockheed Martin military-industrial corporation of a very impressive 1,25 billion contract for the purchase of 54 HIMARS high-precision multiple launch rocket launchers M142, including full ammunition of the latest generation. It is represented by 81 227-mm guided missile M31A1 GMLRS "Unitary" with a monoblock warhead, 81 corrected missile M30A1 GMLRS "Alternative Warhead" with cluster "equipment" in the form of 180 thousand tungsten and steel balls in specialized containers, 54 operational tactical MGM-140B ATACMS Block IA ballistic missiles with a fragmentation warhead in the form of 300 M74 APAM fragmentation elements, as well as 30 training missiles with a reduced range. 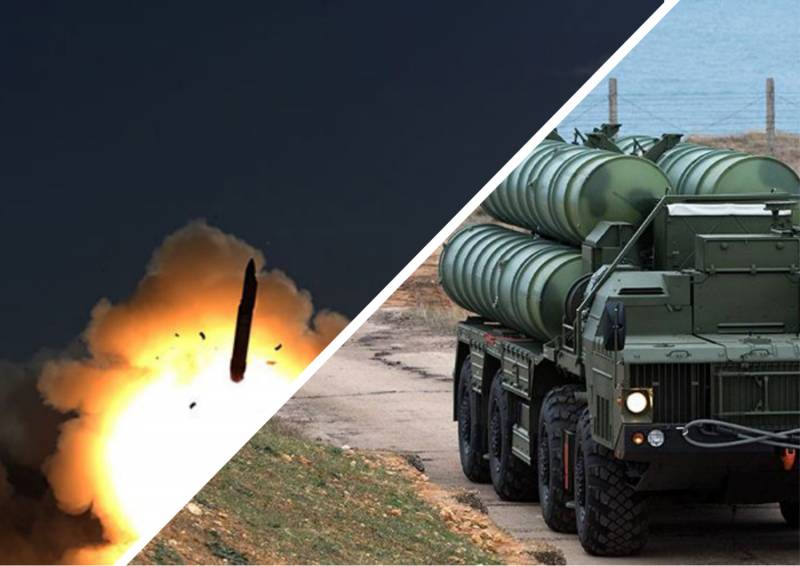 Indeed, the news is not very pleasant both for the Operational Group of Russian Forces in the Transnistrian Region of the Republic of Moldova, which, unfortunately, was not timely equipped with batteries of the Pantsir-S1 advanced anti-aircraft missile and artillery systems, and for the Russian Armed Forces military force in the Republic of Crimea , which may be in the affected area of ​​these guided missiles and OTRs if HIMARS is deployed on Ukrainian territory (in Odessa and Nikolaev regions). Such a scenario is quite realistic, taking into account the possible escalation of hostilities in the PMR, the involvement of the North Atlantic Alliance in the conflict, the participation of the Romanian side with its imperial manners in the Northwest Black Sea Region, as well as the comprehensive support of all this lawlessness by the Ukrainian side.

But even in such an unpredictable situation, the anti-aircraft missile forces of the Russian Aerospace Forces and military air defense systems have a worthy response in the form of the S-300PM-1, C-400 “Triumph”, C-300B4, and Buk-M3 systems, which can without special difficulties intercept 227-mm missiles of the M30 / 31A1 family with an effective reflective surface of the order of 0,05 square meters. m, as well as operational tactical BR ATACMS with image intensifier about 0,2-0,3 square. m, after all, the 92H6Е, 9С32М and 9С36М radars of these complexes (according to official data given on resources such as Vestnik Air Defense and Missile Technology) provide the ability to capture EPR targets around 0,02-0,05 square. More importantly, despite the lower ESR in M31A1 rockets than the OTBR ATACMS, the former are clearly unable to carry out anti-missile maneuvers, which means it will be much easier to destroy them. Conclusion: in most episodes to intercept one non-maneuvering URS M30 / 31A1 GMLRS, one anti-aircraft guided missile 48H6Е / DM, 9М93М or 9М317М will suffice. If we take into account the presence in the network-centric, echeloned air defense, the Pantsir-S1 air defense missile system, which in practice confirmed the possibility of destroying even smaller 122-mm NURS of the Grad-type 9X22U system, then a reliable missile defense umbrella for our military group in Crimea is provided even in the most unpredictable circumstances.

At the same time, it would be very naive to believe that the current 6 rocket launcher HIMARS and 12 rocket launchers M270 MLRS PU will continue to remain unchanged, allowing our anti-aircraft missiles to take countermeasures just as quickly. The first bell of the upcoming “gaining” of HIMARS and MLRS was the ambitious project of the more long-range OTBR LRPF (“Deep Strike”) with a reduced radar signature and increased march speed of flight to 2000. We considered the possibilities of this product in one of our previous reviews. Today, we will remind about another, no less ambitious and dangerous for air defense systems, the modernization project of weapons for the salvo systems HIMARS and MLRS.

We are talking about the "crossing" of a standard 227-mm unguided missile M26A1 / 2 with an inconspicuous gliding guided bomb GBU-39B, due to which a unique two-stage "smart" projectile GLSDB ("Ground Launched Small Diametr Bomb") appeared. The first fire tests of the GLSDB prototype were carried out in February 2015, which for the first time provided the specialists of the American corporation Boeing, the Swedish SAAB and the Norwegian NOBLE (Norwegian Battle Lab & Experimentation) with comprehensive information about the behavior of the GBU-39B Small Diametr Bomb "at high supersonic speeds. This was enough to continue the work.

After almost 4 of the year, 30 of October of 2018 of the year, during the demonstration of the module with 6 227-mm TPK for GLSDB missiles at an exhibition in Trondheim in Norway, NOBLE representatives announced the next stage of GLSDB fire tests, which is scheduled for the autumn of 2019. Apparently, the program has entered the final stretch, and already after 20, new missiles may begin to enter into service with the countries-operators HIMARS and MLRS. What is known about the rocket? Its first stage, represented by the elongated solid-fuel rocket engine of the M26 ER-MLRS missile, will accelerate the GLSDB to speed in 900-1200 m / s and “throw” into the middle stratosphere (at a height of 15-25 km). Taking into account the fact that the SDB bomb together with the heat-resistant container fairing to protect against aerodynamic heating during acceleration will weigh no more than 130 kg (19% lighter than the native combat part of the M26 projectile), the first stage can give the container with GBU- 39B markedly better speed capabilities than the usual NURS. Next, the M26 booster projectile will be shot, and the bomb container will continue to move along a ballistic trajectory with a decrease in speed and climb. 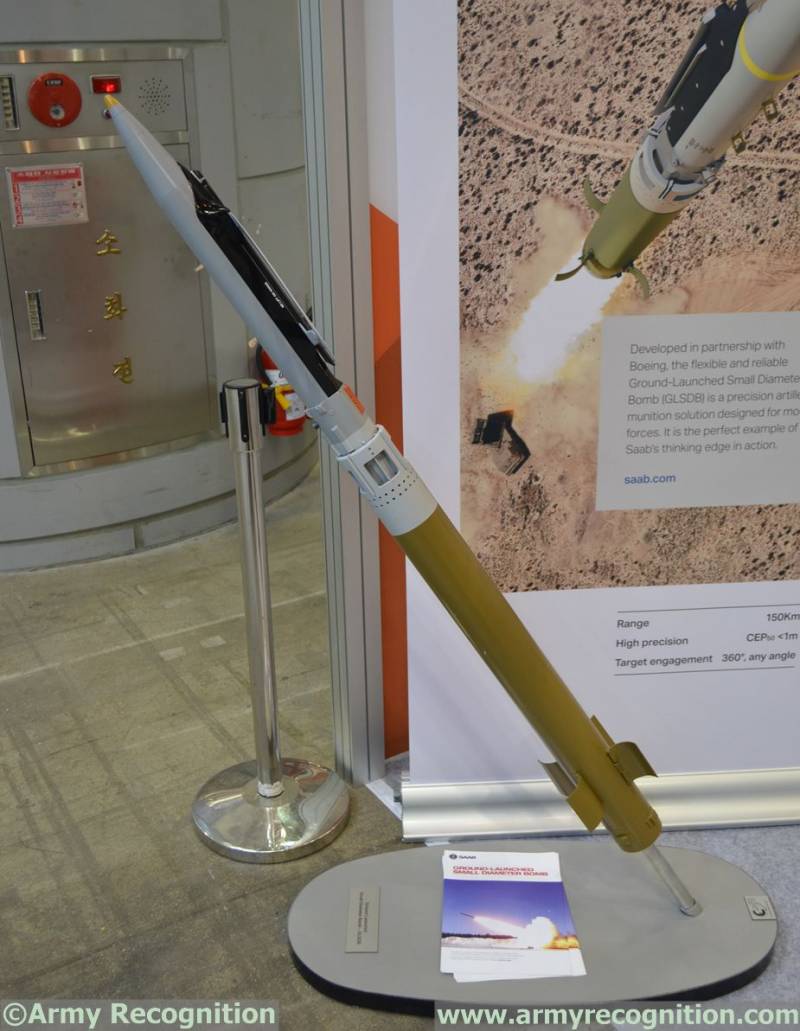 If you take a closer look, you can see not only the layout of the hybrid GLSDB, but also some of its performance characteristics: in addition to the target range in 150 km, the product allows you to attack an object from any angle of approach and from any direction

When the mark passes to 2000-2300 km / h, the container will open, after which the “narrow bomb” will begin an independent controlled flight, and even with the possibility of changing the target to a higher priority on the trajectory (of course, only after equipping the radio with information exchange through the radio network ” Link-16 »). The most important distinctive quality of GLSDB is also the possibility of flying over the target with a further strike from a completely unpredictable air route. It is even more alarming that at the final stage of the flight (planning) the SDB bomb is a “cold body” that is not detected by optical-electronic complexes operating in the infrared range, while the EPR in 0,01 is 0,015 square. m allows you to detect it by means of radar 1PC2-1 "Helmet" complex "Pantsir-С1" from a distance of no more than 5-7 km. This says one thing: at night, or in difficult meteorological conditions, when Pantsir-С1 does not have the ability to use the 10EC1-Е TV guidance channel, several GBU-39B bombs can reach the Pantyrii battery position on 10 km altitude (remaining invisible to neither the radar nor the optical-electronic means), and then swoop into the dead funnel. The worst situation for us will be observed in the case of an attack on the ZRSK Tor-M2U, in which the “dead funnel” is a cone with an angle of solution 50 degrees: it will be easier to get into this cone “narrow bomb”.

Breaking the process of the GBU-39B SDB-I bomb in the battlefield area (approaching the target) is quite real. To do this, it is necessary to deploy near air defense systems and strategically important military facilities of the Resident electronic warfare complex, which suppresses a GPS-guidance receiver mounted on a bomb. As for the interception of a bomb by C-300PM-1, C-300В4 and even С-400, they will not be easy to implement, since the EPR of the planning bomb (0,015 square meters) is less than the reflecting surface indicators of the data processed for these systems declared by the developer.

And even if the radar of illumination and guidance of the SAM data can “capture” the planning block of the promising GLSDB missile, it will be problematic to accompany it until it is hit by 48N6DM and 9M83M anti-aircraft missiles, since the enemy has advanced aviation EW container stations of the AN / ALQ-249 Next Generation Pod type, capable of delivering powerful simulated sights in frequency, as well as noise interference. It will be very difficult to isolate a miniature SDB against the background of this interference to “three hundred” and “four hundred”. A more confident reflection of the GLSDB strike can be made with the S-350 Vityaz air defense system, equipped with a more modern and noise-protected multi-function radar with AFAR 50N6, but I don’t even want to mention the state of affairs of this complex entering the armament of anti-aircraft missile units.

Ctrl Enter
Noticed oshЫbku Highlight text and press. Ctrl + Enter
We are
Russian OGRF in Transnistria "on the fly" at HIMARSThe alarms of the “Syrian denouement”: “Super Hornet” has worked, HIMARS in the queue. Ways of counteraction
Military Reviewin Yandex News
Military Reviewin Google News
92 comments
Information
Dear reader, to leave comments on the publication, you must sign in.