Armored train How they fought

November 17, 2018
19
A huge reservoir of information about the combat work of armored trains, which exists today, oddly enough, rather confuses this question than gives answers. The reason for this situation is that the majority of sources of information were the participants of the events themselves. The fighters and commanders of those same armored trains. 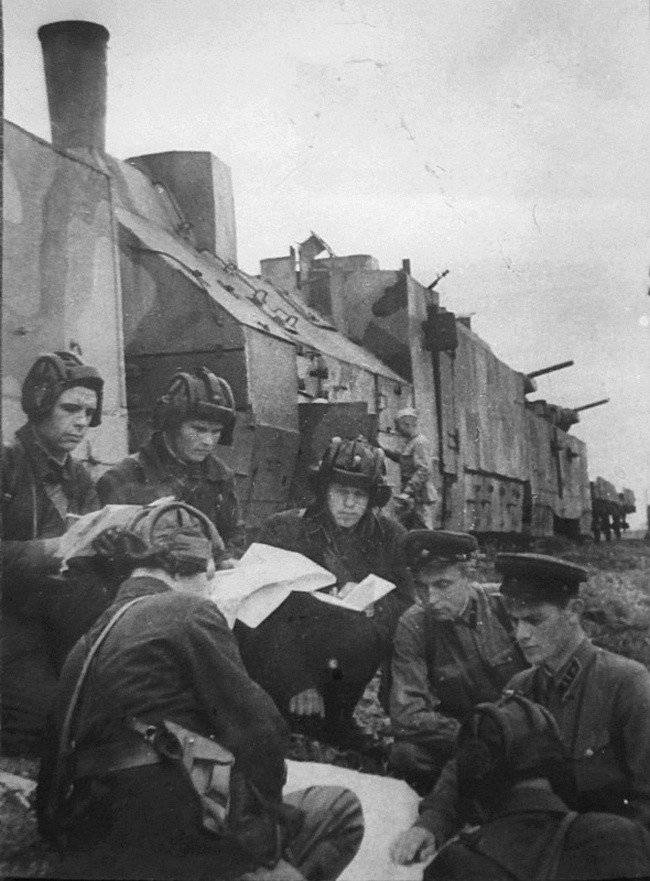 Without at all detracting from the value of such information, it is still necessary to recognize that the participant in the events, whether a soldier or an officer, has an idea only about "his" area of ​​battle, about his tasks, about his feelings. 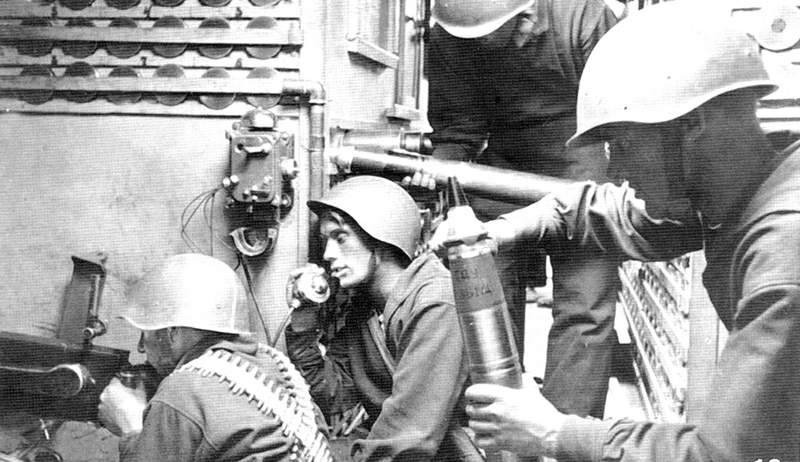 In order to gather a more or less objective picture, it is necessary to interview as many participants as possible and, if possible, from both sides. What is impossible today. Archival documents, especially the beginning of the war, simply do not mention many moments. The confusion was complete.

And the material that we offer, we emphasize, is not a scientific work. We do not draw conclusions. We do not analyze events, we do not put forward new theories. We are simply saying that for quite a long time it was “not very interesting” for our historians. More about one side of the war.

Very often, various sources say that the attitude to armored trains in the pre-war period was ambiguous. Recognizing the firepower of the BP, mobility and maneuverability, quite serious armor protection, as well as the possibility of using it as draft force if necessary, the leadership of the Red Army nevertheless considered the future war a war of engines. War aviation и tanks.

This opinion is largely, in our opinion, correct. But quite controversial. Recall the materials on the creation in the prewar period of a fairly modern BP. 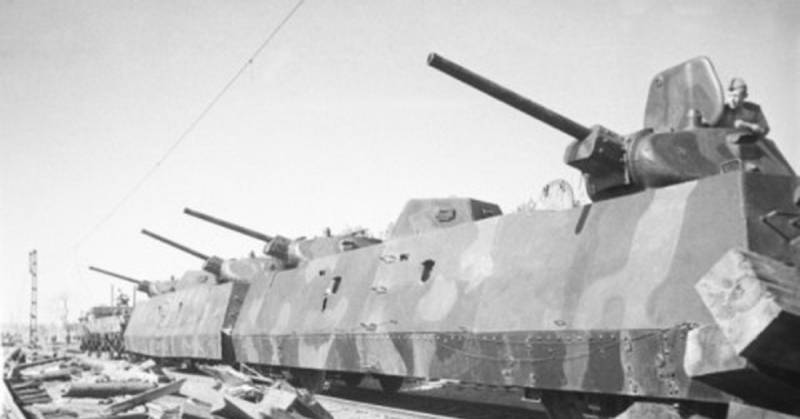 Two factors played a rather negative role. First, an unforgivably large reduction in the number of BP after the civil war. In October 1920, the Red Army had an 103 armored train. And at the beginning of the Great Patriotic War, all 53 (!). Of which 34 belonged to the lightweight class.

Secondly, the transfer of armored trains to the Main Artillery Directorate at the end of 1923 not only did not contribute to their improvement, but also turned the very essence of the BP into the role of mobile artillery batteries. The leadership of the State Agrarian University openly viewed the armored trains as artillery on railway platforms. 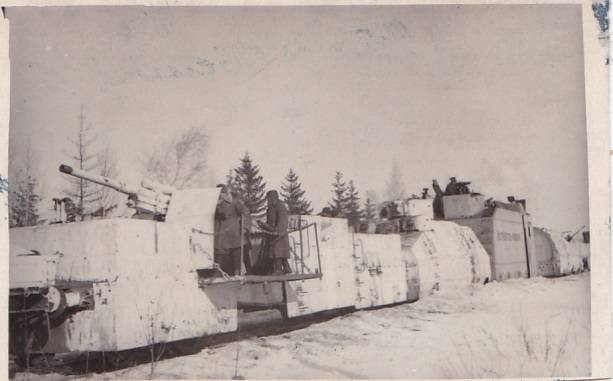 By the way, this is the answer to those of our readers who discussed the heavy railway tools and their conformity with the BP configuration.

From previous materials, readers know the principles of creating the most famous armored trains, their composition and purpose. That is, despite the difficulties, in the Red Army the armored train to the beginning of the war not only survived, but also gave rise to many "descendants". And they themselves have become very different. Not those that smashed the enemy in the Civil ...

As of June 22 1941, the Red Army had 53 armored (34 of them belonged to the class of light), in which structure was broneparovoza 53, 106 broneploschadok artillery, air defense and broneploschadok 28 160 more armored vehicles adapted for movement by rail. There was also 9 armored rubber and several motor armored cars.

In addition to the Red Army, the operational troops of the NKVD also had armored trains. They had 25 armored steam carriers, 32 artillery armor sites, 36 motor armored cars and 7 armored vehicles.

Very often the question arises about the armored trains of the NKVD. And this question arose from a rather superficial glance of our education, cinema and television on the NKVD itself. The majority of the population had a firm conviction that the NKVD was engaged only in the search for enemies of the people, spies, saboteurs and their destruction.

Oh, yes, of course, more detachments, as without them ...

In fact, one of the main tasks of the internal affairs bodies was to protect the objects of the national economy from sabotage. But for the picture on the screen it is not as colorful as the arrest of a pest or a spy. Or shooting a machine gun at their retreating fighters.

Railway junctions, stations, places for filling locomotives with water and coal, bridges, spans, and warehouses were a rather desirable object for sabotage. Imagine yourself blown up even now Transsib. And this is the age of automobile trucks, airplanes and other vehicles. And before the war ...

Thus, we came to the first answer to the question about the use of armored trains. Protection of railway network facilities. In peacetime from sabotage. In wartime, and from the attacking enemy, and from the aircraft, and from all that may appear on the railway. Including enemy armored trains and other armored vehicles. In particular - the tanks of the enemy. 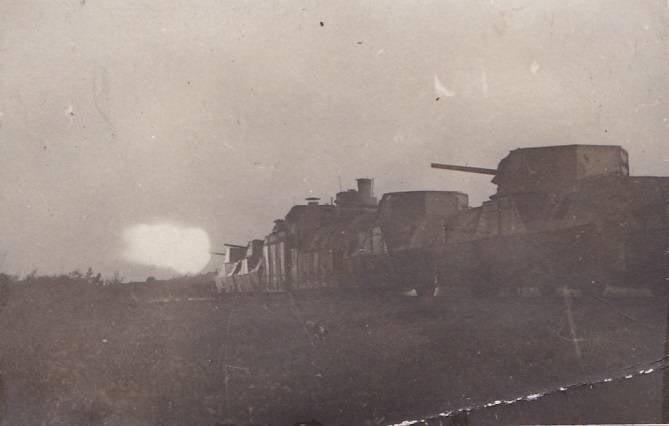 In addition, during the evacuation period, situations were often encountered when, for various reasons, there were cars with important cargoes at the junction stations for various reasons. From money from banks, archival and museum valuables to spare parts for aircraft and tanks, and even machine tools of evacuated factories.

BP was also involved in the export of these trains. In one part of our story, we mentioned the actions of the Soviet armored train, which for some time alone, not only beat off the station, where there was a train with spare parts needed for the front, but also ensured their removal to Soviet territory.

Even more prosaic are the tasks for the armored trains of the Red Army. Generally speaking, this is not even a task, but a task. And this task sounded simple: support for rifle and other units operating in the railway line. 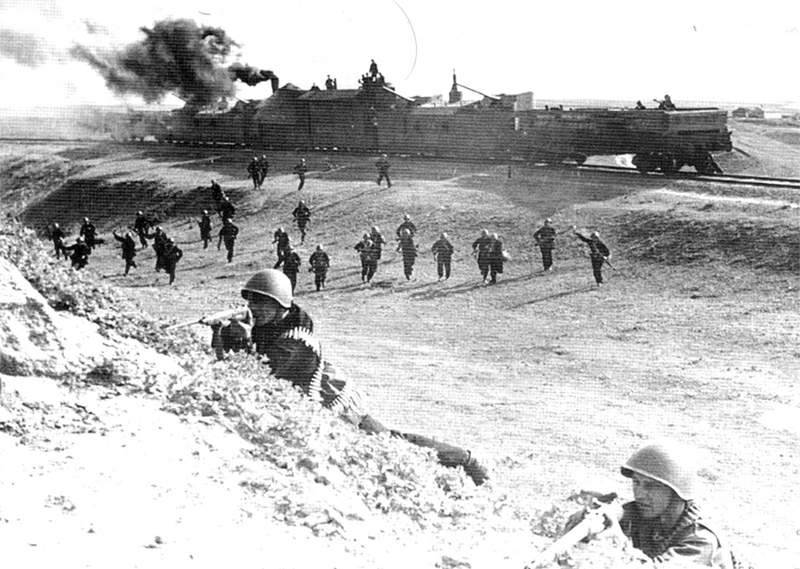 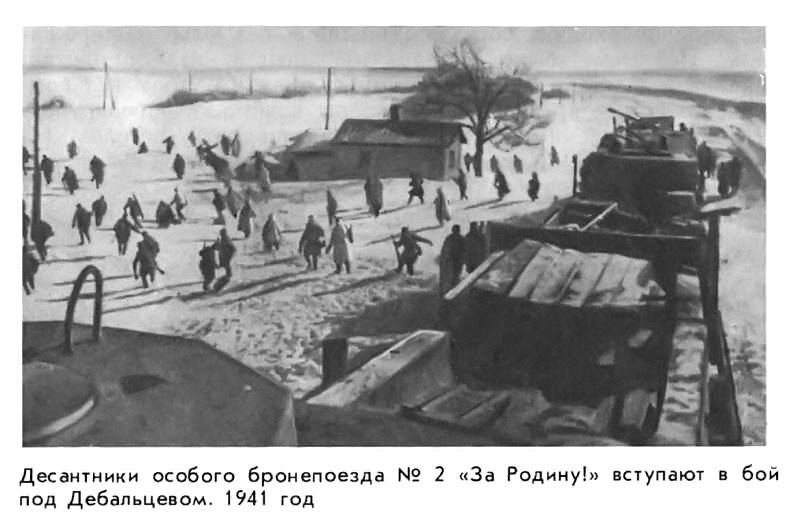 They were mobile artillery batteries to fight the enemy’s artillery. In addition, they defended the coast from enemy landings. They were the mobile air defense batteries that defended the sky of Leningrad or the positions of the marines in the Crimea. Protection of their own bases at the stations or nodes from them no one took off ... 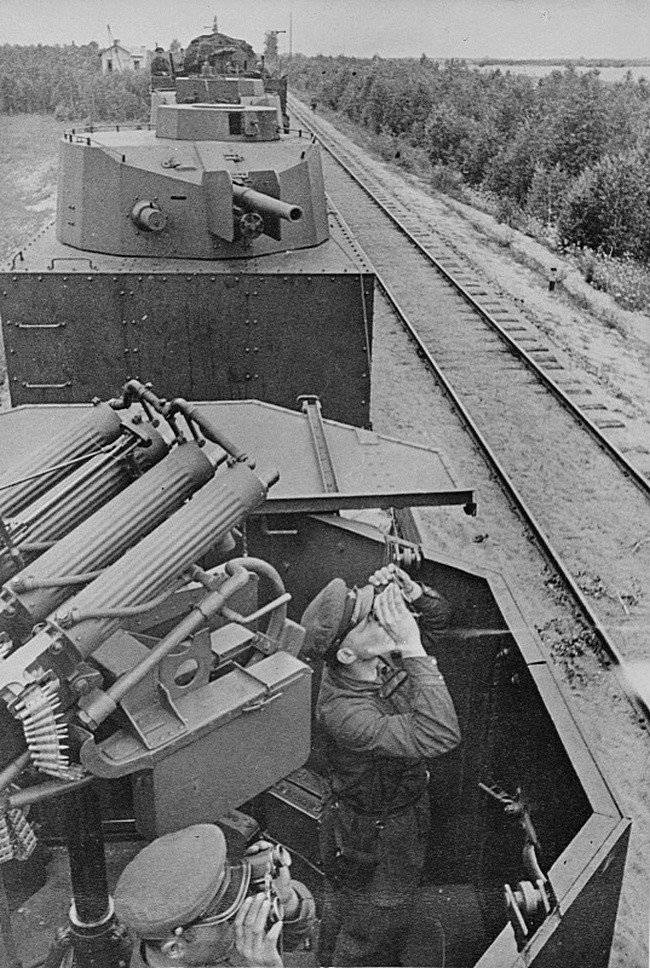 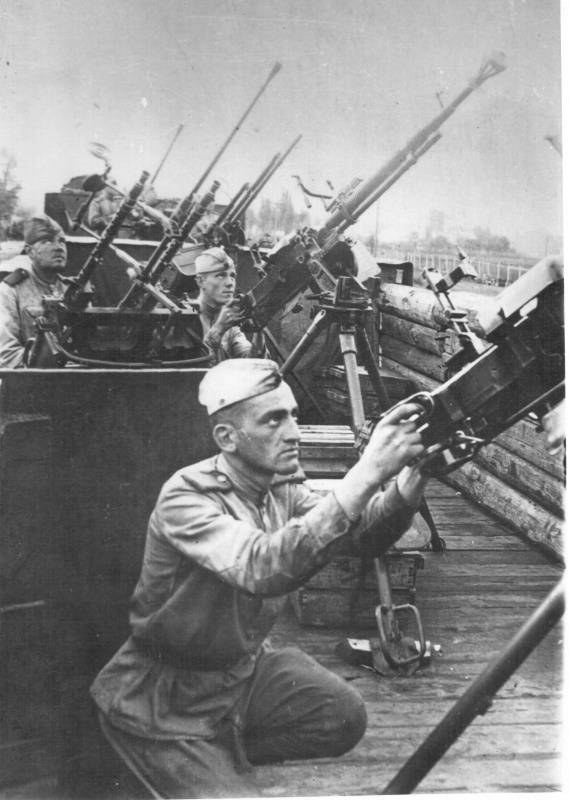 Armored trains operating along the front had several other tasks. In the first months of the war, when divisions and corps were encircled, it was armored trains that threw rings at the breakthrough.

The huge loss of power supply, especially in the 1942 year, is largely due to this. Moreover, the armored trains were the rearguard of the retreating troops.

There were cases when the BP went to battle with the German tank columns. It is clear that such trains did not have chances to return. The tanks were initially much more maneuverable, and the armor in 15-20 mm for tank guns is not a hindrance.

A huge role was played by armored trains in the defense of railway junctions and stations. Here they turned into quite serious air defense forces. The BP was a desirable goal for German pilots, and the calculations of the air defense of an armored train very much wanted to “overwhelm the German”. And piled up. One of our armored trains had 15 aircraft downed to his account. 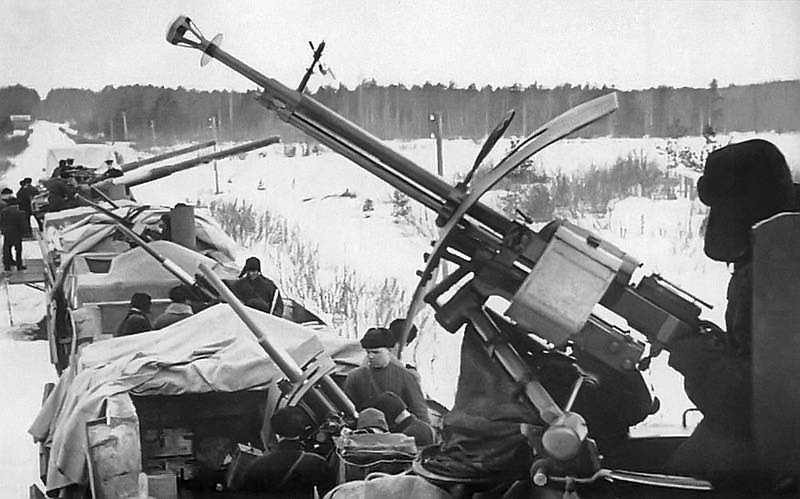 But the use of armored trains as mobile batteries has not been canceled. Trains proved to be quite effective in counter-battery wrestling. Moreover, in this case it is necessary to understand not only battles with enemy field batteries, but also the fight against enemy armored trains.

The famous battle of the Soviet "Ilya Muromets" and the German "Adolf Hitler", in which our armored train destroyed the German, is a great example of such a confrontation. Both armored trains in this battle were used precisely as artillery batteries.

Yes, and the battle itself became possible precisely because of the sudden appearance of a serious artillery battery on the German side. After all, the first destruction of the German artillery took pilots. However, the battery was not detected. And only then, when intelligence found a German armored train, the Ilya Muromets entered into action.

Armored trains had one more, absolutely not heroic task. Protection of railway trains. It could be trains with values, staff trains, even sanitary trains. Usually, light armored trains or air defense systems were used for this purpose. The train simply escorted into the danger zone. If necessary, took the fight. 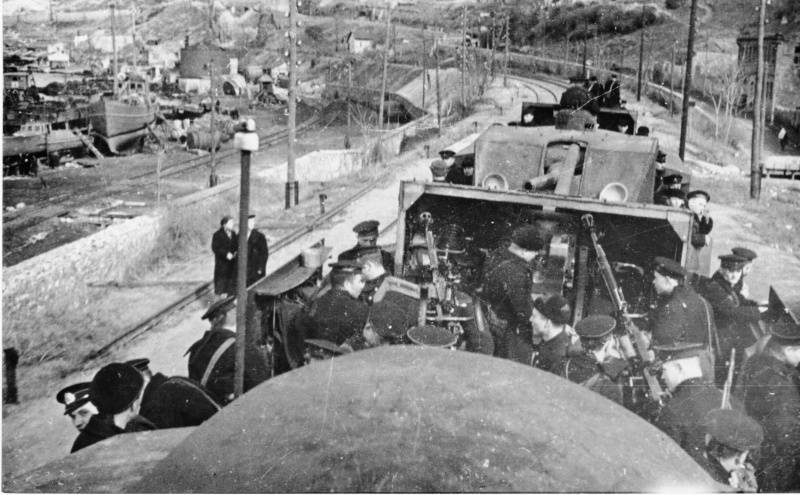 On the way back, the armored train also performed the combat task of guarding and defending the railway. I didn’t just return, but I controlled all the approaches to the tracks, all the crossings and other objects.

Quite often, BP used for the transport of troops. Thus, the Tula Worker (Tulyak), already known to us from photos and previous publications, was built to carry out the tasks of destroying enemy landings. Built in the usual railway depot. From scrap materials, of course. 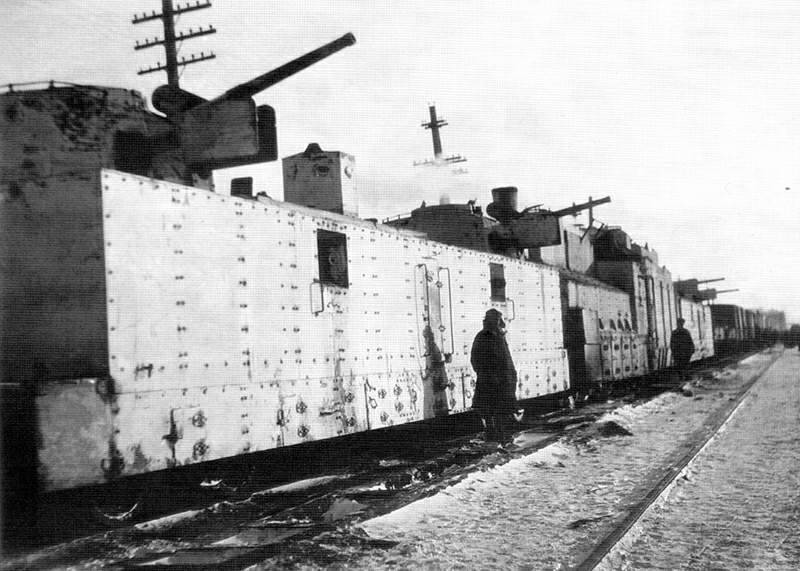 The landing force was most often transported on control platforms and armored platforms. It is from here that there is a photo of soldiers on an armored train who are looking forward with determined faces. This is not a staged photo.

The paratroopers looked ahead not for the beautiful picture in the photo. How often they notice the enemy and how quickly they leave the platform often depends their lives. Armored landing platforms are wonderful. Almost impossible. But the transfer of personnel, on the contrary, is common. The wooden sides of the platform are not very reliable protection, even armored with sandbags. Not from everything weapons can protect. 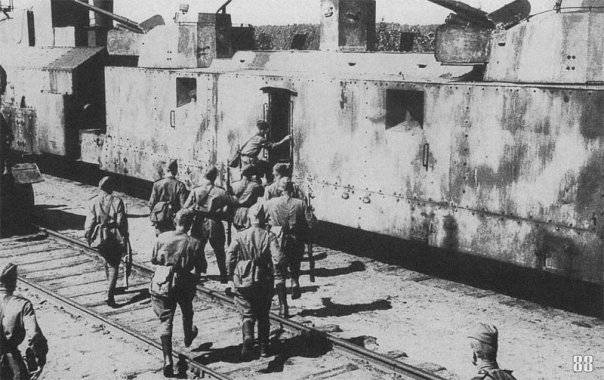 Moreover, quite often the depot commander received rifle subunits when conducting independent combat operations. The assault force was temporarily assigned to the crew of the armored train. And the armored train itself turned into a fairly fortified stronghold during the defense and good artillery support in the offensive. 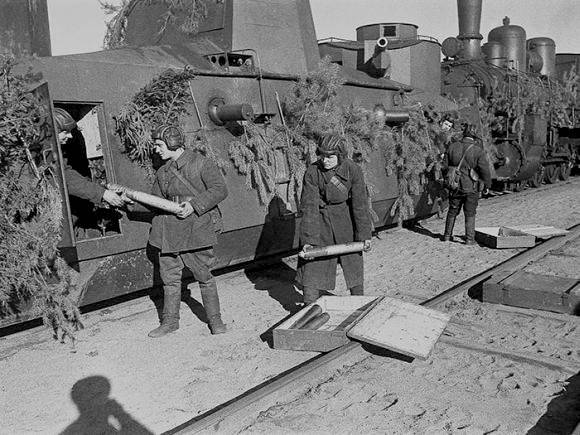 Armored trains had really heroic tasks. Tasks that are hard to believe today. Armored trains participated in the attack in the first echelon of our army! We emphasize, not in the second echelon, from where they supported the offensive, but in the first. On the front, as the soldiers said then. 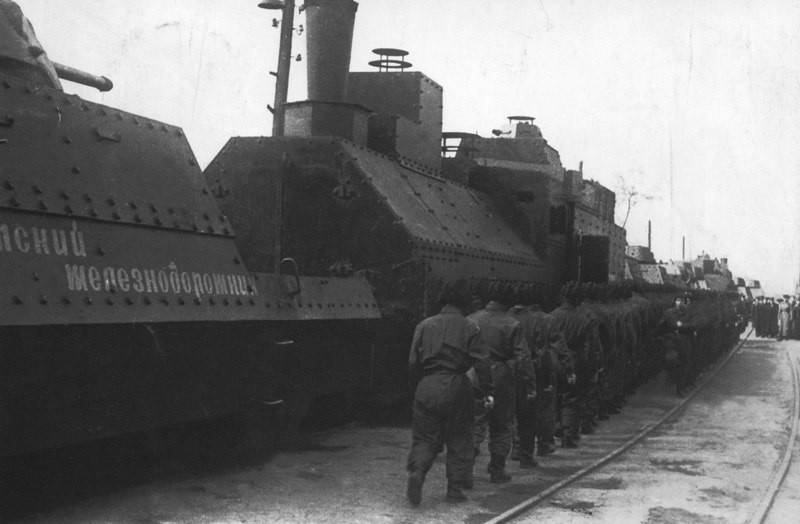 The famous Leningrad "Baltiets", built at the expense of workers Leningrad-Electro depot in 1941, not only successfully fought in the siege, but in January 1943 at the beginning supported the advancing infantrymen with fire, and then, during the decisive offensive of the Soviet troops liberating the northern capital , "Baltiets" even moved ahead of the attackers! Armored train, for which the advancing troops are moving ...

But we also paid dearly for these victories. In the 1941-43 we lost the 65 armored trains.

To underestimate the contribution of armored trains and their crews today is very simple and easy. The whole question is that the Victory was forged by everyone, from infantry to the front commander and supreme commander. And therefore, first of all, our goal is to set the task to find and tell as much as possible about lesser-known pages in our stories. Combat mission.

The following material, which continues the theme, will be about Ilya Muromets and Adolf Hitler.