Dismember and distribute Ukraine? Will not work!

November 13, 2018
173
Simultaneous street actions took place in Moscow and Warsaw, the participants of which demanded the dismemberment of Ukraine and the transfer of its land to neighboring states: Russia, Poland, Romania and Hungary. The organizers of these actions were two political organizations: The Other Russia by Eduard Limonov and the Polish right-wing group Phalanga. 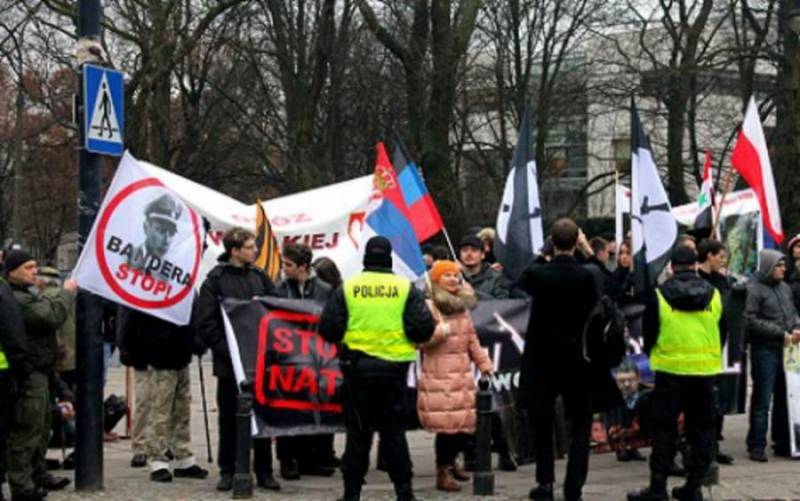 The events took place near the buildings of the Ukrainian embassies in the Polish and Russian capitals. And in Poland it was a rally, in Russia - a single picket stopped by the police.

A number of media outlets circulated a manifesto dedicated to this action. This declaration states that "the policy of the Russian leadership towards Ukraine has reached a dead end," and "many millions of Russian people in Kharkov, Odessa and other cities and regions live under occupation and national oppression." That Ukraine “should shrink to its historical 7-8 central regions, having ceased to be an aggressive monster, forcibly "Ukrainianizing" and oppressing various peoples. To achieve this goal, it is necessary to unite efforts with the neighbors of Ukraine, which have their own claims to it ”.

“Give the partition of Ukraine! Kharkiv and Odessa are Russians, Lviv is Polish, Transcarpathia is Hungarian, Bukovina is Romanian! ”Says the declaration promulgated by Other Russia. 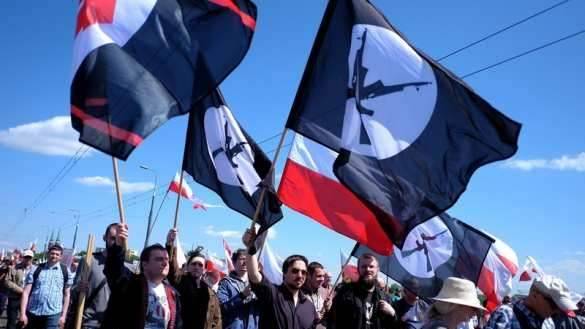 This idea is not new. With this proposal, the leader of this organization, the writer and politician Eduard Limonov, has long been advocating, “pacifying” Ukraine by dividing its territories between neighboring countries.

“They will not stretch, they will have to lose all the colonies. Ukraine is a small colonial empire. They still hold the eight Russian-speaking regions (I don’t count the Crimea anymore), four Polish regions, including Lviv, a huge number of Romanian lands, Hungarian lands and a piece of Slovakia. When these five countries take advantage of their historical right and take their lands from Ukraine, it will be more awesome than any Minsk agreements, ”the writer told The Day TV a couple of years ago. 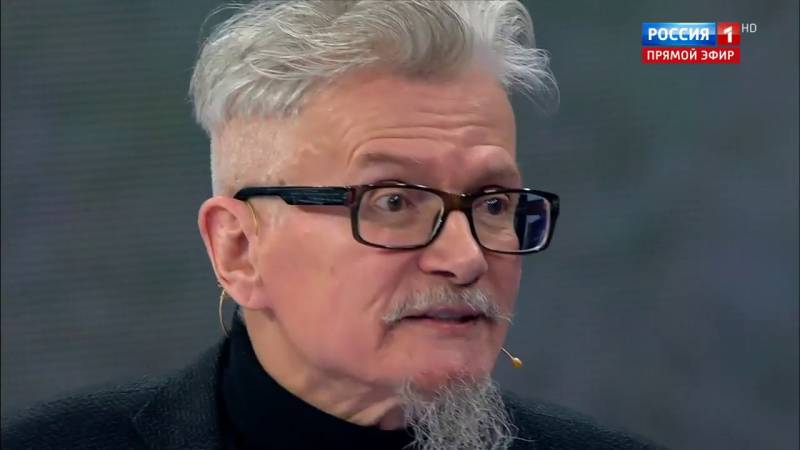 “Ukraine will remain with 9 areas and with a very decent population by European standards - 20 million people. And she will be peaceful and calm, because she will not be able to stir anything up to ruin everyone’s life, ”Limonov suggested.

Of course, Limonov, a creative person, has the right to his artistic images, which literary critics should evaluate. Both Other Russia and Phalanga are marginal and few organizations, and it would seem that they could simply be dismissed as if the carnival culture had been borrowed from their neighbors.

But not everything is so simple. The idea of ​​dividing Ukraine between Russia, Poland, Hungary, Romania has its supporters in a patriotic environment and was even publicly voiced by politicians, including deputies of the State Duma. 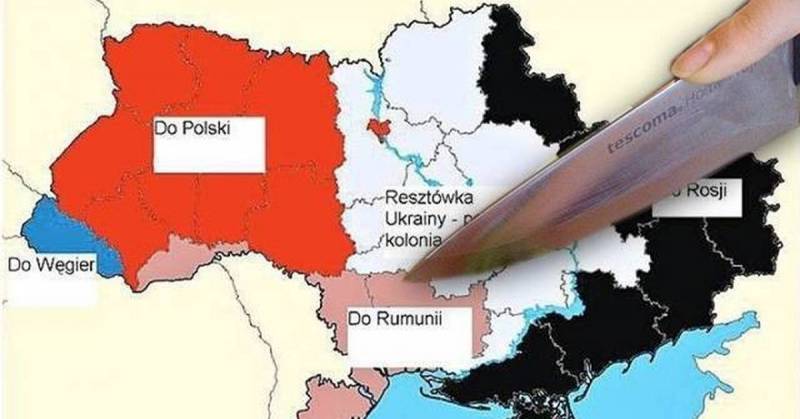 Moreover, in the part of the expert community close to the Kremlin, there is a perception that Russia is constrained by limited resources from conducting the operation to force the peace of the Kiev junta, which is why it cannot take the ruins of Ukraine to provide for it. The current government in Ukraine, for all its criminality and lack of professionalism, nevertheless ensures a similarity of order in the territory under its control and the execution of basic functions, albeit in a “fading mode”. In the event of the liquidation of the state apparatus, Russia will have to take care of the entire territory and the population located there.

This, by the way, was directly stated by George Soros. “Russia will not be able to leave Ukrainians starve to death and freeze to death in the ruins. However, Europe will still win even if Ukraine will only have a huge ashes, littered with a mountain of stinking corpses, ”the well-known financier argued. 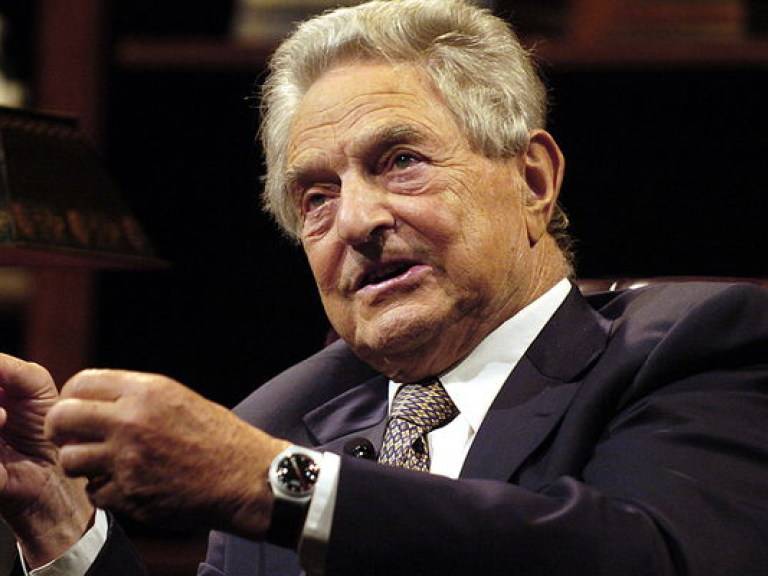 Moreover, the situation is such that even without any “coercive operations”, the current Ukrainian government can collapse, bringing the country into the indicated state. And in this sense, it is tempting to share the costs of saving the remaining population and restoring the necessary order on the lands of the former Ukraine with someone else. For example, with the specified countries, having paid with them the western territories of this republic. Purely from a tactical point of view, such a decision may seem justified, but from a strategic point of view it does not stand up to scrutiny.

To begin with, there are no “Polish” and “Russian-speaking” regions, Romanian and Hungarian lands within modern Ukraine. These are all native Russian lands that were once part of the ancient Russian state. These territories were repeatedly conquered and liberated by the Russian troops, each their inch was watered with Russian blood.

The fact that today this sacred land for us is occupied and is under the control of Western puppets and collaborators does not change the essence. “Where the Russian flag is raised once, it should not be lowered there,” said Emperor Nikolai Pavlovich.

However, instead, people who call themselves Russian patriots, offer to give these lands, and, probably, together with their Russian population to countries that do not have any rights to them. After all, such territorial acquisitions are achieved as a result of heavy wars and are paid for with the blood of soldiers.

We also note that even Galicia, Chervonnaya Rus, rejected during the time of the Mongol conquest and from that moment under the rule of foreigners, who purposefully implanted here another's faith, tradition and speech, nevertheless still retained to this day some echoes of the Russian consciousness and was never completely assimilated. 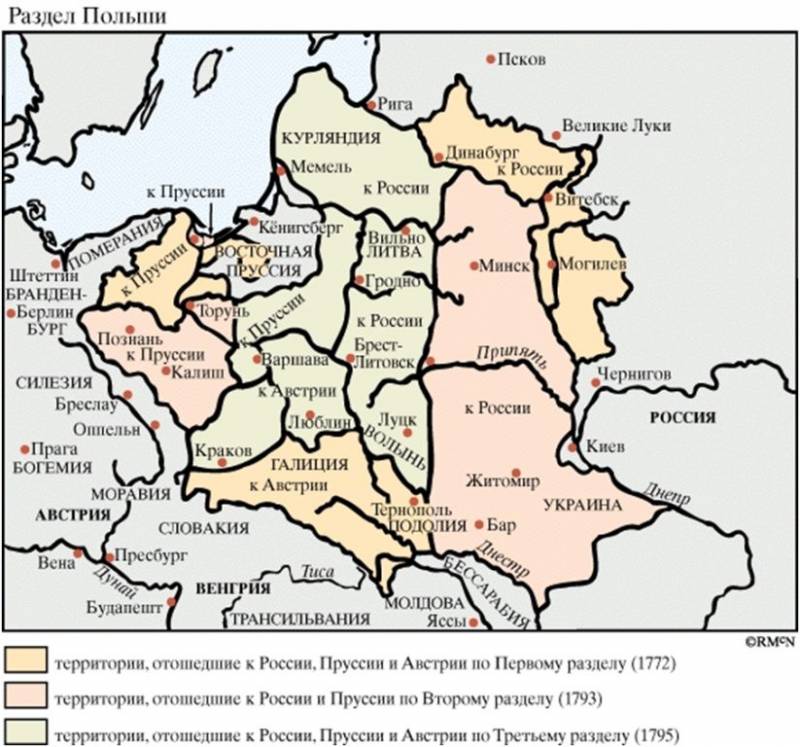 Once Russia already shared one Slavic state, Poland, with Prussia and Austria-Hungary. The result was the fierce hatred of the Poles for Russia, which dates back to the third century. At the same time, neither Prussia nor Austria-Hungary became our friends. But the Poles, though Slavs, are still alien to us, and now they are proposing to “divide” our vital lands. What for?

Perhaps, supporters of this idea believe that this gift will make Poland, Hungary and Romania our friends?

It can be said with full responsibility that this will not happen. Poland, as a result of the Second World War, which it lost in 1939 for two weeks, received huge territories belonging to Germany by the efforts of the USSR. But the love for us Poles, this generous and deserved gift, as we see, did not add.

If members of the EU and NATO take part in the “deriban” of Ukraine, there is no doubt that this circumstance does not legitimize in the eyes of the West the accession of the remaining territories to Russia. For him, we will still be aggressors and occupiers.

Quite often we hear that, say, the population of Western Ukraine is absolutely alien and hostile to us, that everyone there is residents of the lands of the former Galician-Volyn principality.

However, this, to put it mildly, is not quite so. Recall that even before the war, the OUN fighters, being under the secret control of the defintivas (Polish counterintelligence), committed their “athens” not so much against the Polish administration, as against the “Russophiles” and the Communists (not necessarily members of the Communist Party, but simply supporters of reunification with Soviet Ukraine), which among the "zapadentsev" was much more than the nationalists. 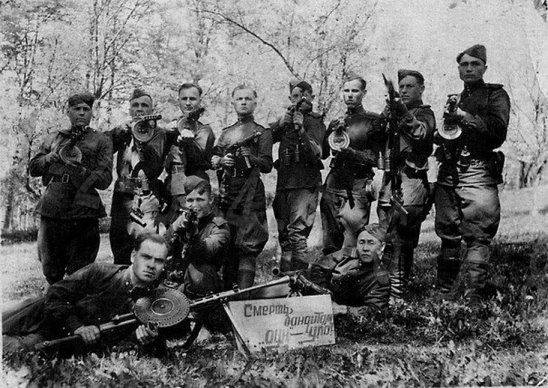 After the re-liberation of Western Ukraine from the Nazis and their local accomplices, the brunt of the fight against Bandera rested on the shoulders of local residents. Large-scale military operations against the UPA ended by the 1945 year, and the final destruction of the terrorist bandit underground was carried out by the territorial bodies of the MGB, the police and fighter units manned by local residents, the very “zapadentsy”. And now far from all the inhabitants of these areas are deceived by propaganda and are fans of Bandera and Shukhevych.

In addition, by encouraging the capture of the western part of Ukraine by NATO countries, we thereby agree that the bases of the North Atlantic Alliance, including the missile defense system, will move even closer to our borders. And in the context of the US withdrawal from the INF Treaty, this can have disastrous consequences for us.

And these our ancestral territories, once under the authority of these countries, may be lost for us for a long time, if not forever. They can be returned only as a result of a big war with huge casualties.

Finally, the assertion that the establishment of Polish-Hungarian-Romanian-Slovak sovereignty over the West of Ukraine will extinguish its aggressiveness does not stand up to criticism. Recall that during the occupation of Western Russia by the Polish-Lithuanian Commonwealth, aggression against Russia (then Muscovy) took place continuously, and not only the Uniates but also the Little Russians and the Dnieper Cossacks went to the east to the Polish troops. 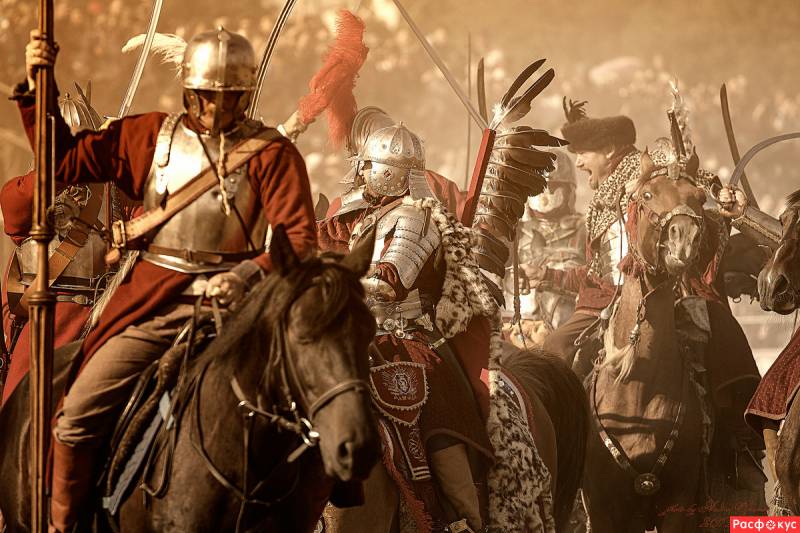 The current aggression against the Donbass is not at all connected with the size of the land torn away from Russia, but with the actions of the Kiev junta, consisting of Western puppets, not connected with the Little Russian people, whether by ethnic, religious or cultural ties.

However, a number of domestic politicians and the media purposefully implant in our public consciousness a negative and outright hostile attitude towards the “Little Russians” in the spirit of “they have always been traitors”, “they are strangers to us” and so on, in the spirit of lines “we will never be brothers”. Suffice it to say that the central TV channels are seriously discussing the diversion of the Dnieper waters from Ukraine, which will inevitably lead to an environmental and humanitarian catastrophe in this country. And such ideas are supported by the audience! 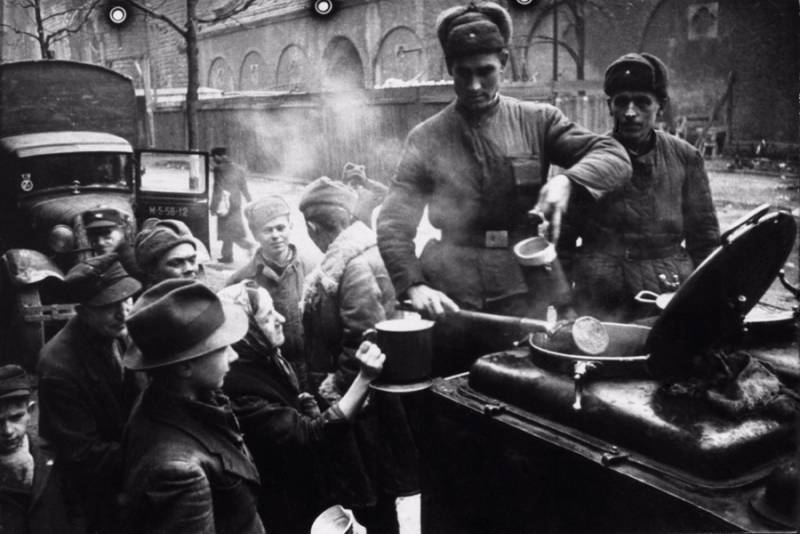 Joseph Stalin once said: “Hitlers come and go, but the German people remain,” making it clear that the whole German people cannot be punished for complicity in the monstrous crimes of Nazism. That the period of Hitler’s reign is just a brief, albeit the most terrible episode in the thousand-year history of Germany. Note that this is said in relation to a country alien to us, which twice during the last forty years (at that time) was our enemy, who sought to destroy us as a people. And here they propose for the crime of the Poroshenko regime to give millions of Russian people to Polish-Romanian-Hungarian bondage!

So how to be? The answer is simple: it is necessary to look for an opportunity to return all the south-western Russian lands, called Ukraine today. The form in which this will be done - the entry into the federation on the rights of subjects, the creation of a confederation or a similarity of the Union State of Russia and Belarus - will depend on the situation.

Of course, the main question will be: where to find funds for this? It is obvious that it will not be possible to respond to it with the help of pension manipulations and the reduction of the social sphere that is already in a terminal state. But there are other sources of funds in the country for which the government “did not encroach”. Perhaps it is time to move to a mobilization economy and state capitalism.

In any case, the "consortium" for the dismemberment of Ukraine will cost more. 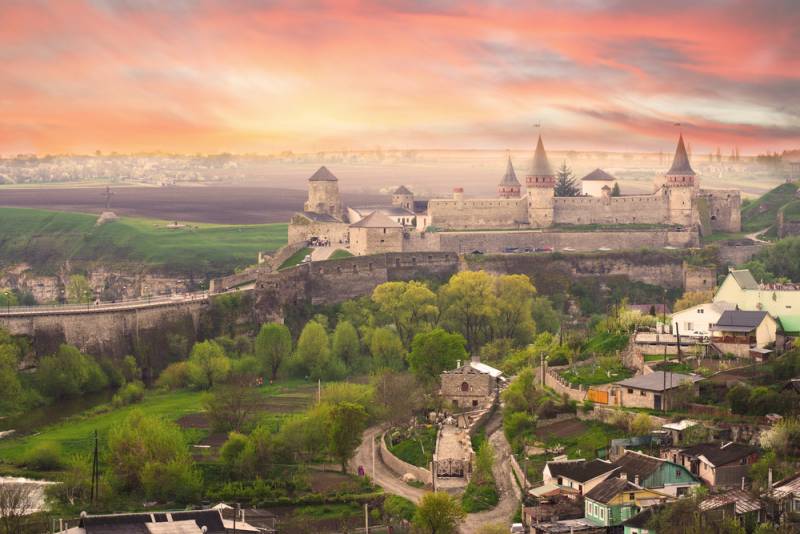