Warriors of the State Tauantinsuyu (part 2)

Our lamas are dying
When going through the sandy highlands.
And our feet torment the thorns,
And, if we don’t want [military service]
die of thirst
We have to great distances
On your own back drag water.
(Poem “Apu-Olyantai”. Stingl Miloslav. “The State of the Incas. Glory and Death of the Sons of the Sun”)

War and diplomacy of the ancient Incas

In the state of Tauantinsuyu, universal conscription existed, and any citizen of the Inca empire could be called up for the army, if only he was physically healthy. They called not all, but by lot. But since the empire fought almost continuously (especially during the reign of its last six masters), it turned out that almost every man gained military experience. Moreover, the right to marry and start a family of the Incas was obtained only by those who either fought or were called up for military service! 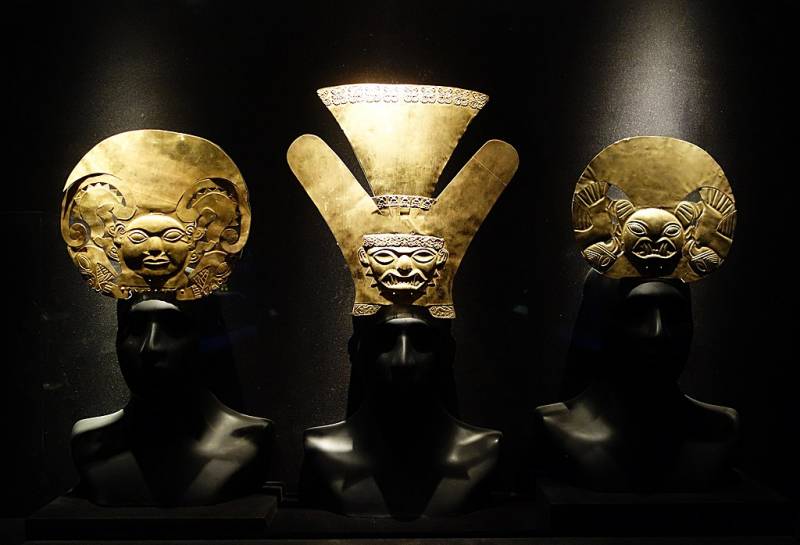 There is a private archaeological museum in Raphael Larco Herrera. So it is a modern and very rich repository of ancient Peruvian artifacts, including those belonging to the Incas. True, the Spaniards gold jewels of the Inca were melted down mercilessly, but, nevertheless, there is something to see in the museum. Well, let's say, on these hats of the leaders of the Incas. And you can imagine how such and similar decorations acted on the simple souls of the peasants and soldiers of the Incasian army. (Larco Museum, Lima)

Well, and the introduction to military service for commoners began from a very early age and took place directly in the communities of the ayla. By the beginning of the 15th century, compulsory military training was introduced to the Inca empire for all young people between the ages of 10 and 18. Experienced warriors, usually from junior officers, who taught youth to master the skills, led their training. weapons, the basics of hand-to-hand combat, the ability to overcome water obstacles, besiege enemy fortresses, give smoke signals and many other things important to a warrior. 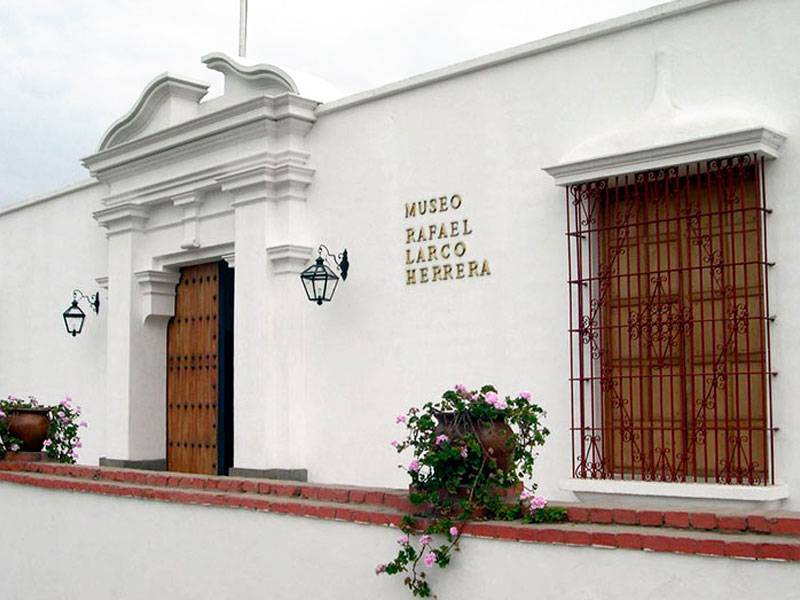 After training, the young men passed something like an exam, which was attended by the state inspector-Inca, who observed how well future warriors mastered military wisdom. Only having successfully passed this exam, the young man was considered an adult. At the same time, sick and cripples were not subject to military training. But, as elsewhere, including in our days, young people who have undergone military training, look down upon them. Well, as soon as the war began, the communities put up the required number of warriors, and they marched along with the division to which this community was attributed on the basis of the administrative division of the empire. 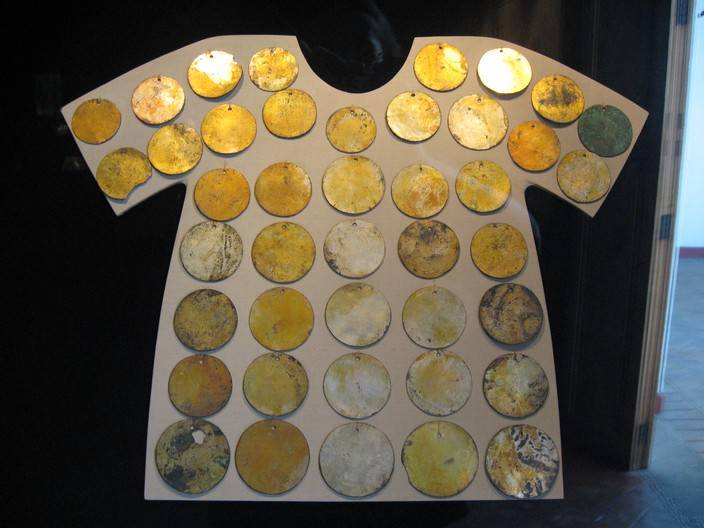 Such a “T-shirt” with gold discs could have been a shell in battle (why not?) And a distinction between a high-ranking commander. (Larco Museum, Lima)

All of this suggests that the Incans military business was both well developed and had a clear structure. For example, even the powers were clearly distributed in such a way that the ruler of the city of Cuzco, commander of the military commander — who was either the supreme ruler Sapa Inca himself, any specially appointed person — was in charge of the economic activities of the empire, as well as the supreme ruler himself. a man who belonged to the Incas of the nobility. 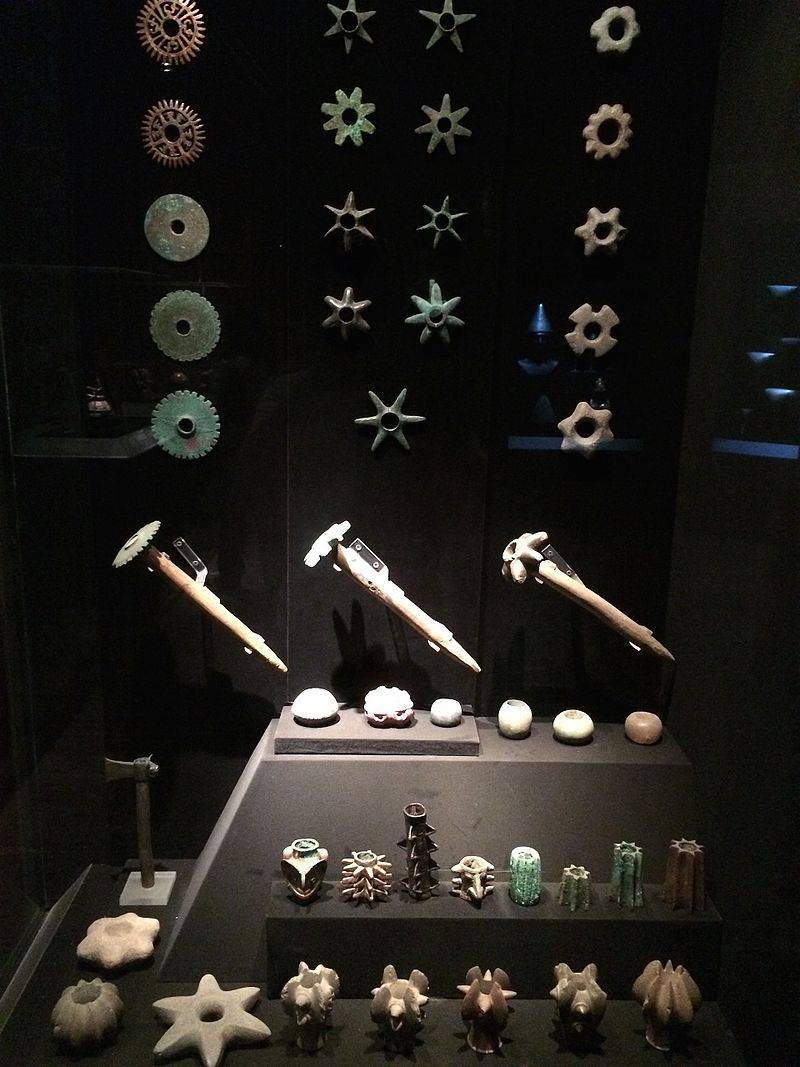 Well, just a unique collection of priests makan - the main weapon of the Incas in hand-to-hand combat. They were made from very different materials - stone, copper, bronze and even gold. (Larco Museum, Lima)

Could the supreme ruler of the empire - Sapa Inca or the only Inca be a good commander? It turns out that he not only could, but simply had to be, because he was prepared for this from early childhood. In Tauantinsuyu, it was believed that the higher a person is in a position, and the more noble he is, the greater his abilities must be possessed. Therefore, the young heir to the supreme ruler, and he really chose him and not always became his eldest son (the Incans had such customs!), Had to be not only the most educated among young people of noble birth, but also the most physically developed. He had to practice methodically while performing difficult physical exercises, develop endurance and strength, and, of course, the ability to defend himself. For what the future, the Inca was taught the art of weapons possession: he had to be able to fight with a spear, a makan club, and throw stones from sling. They also taught him martial art, that is, everything that the Incas knew about strategy and tactics, and they knew, judging by their success in the wars with their neighbors, not so little. 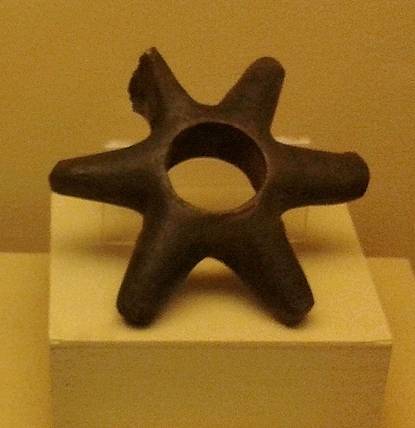 This is the top of copper. (Archaeological Museum of Rio de Janeiro) 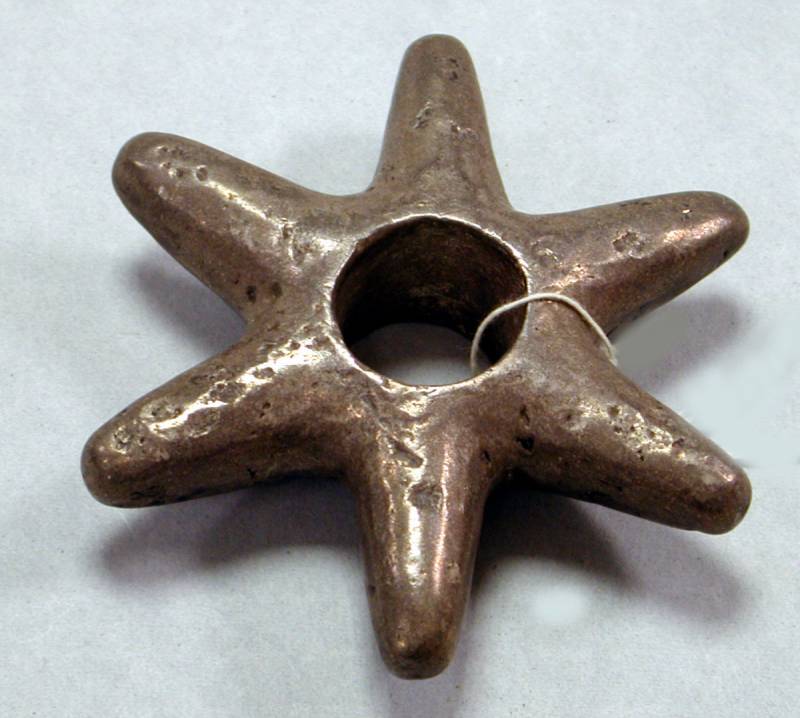 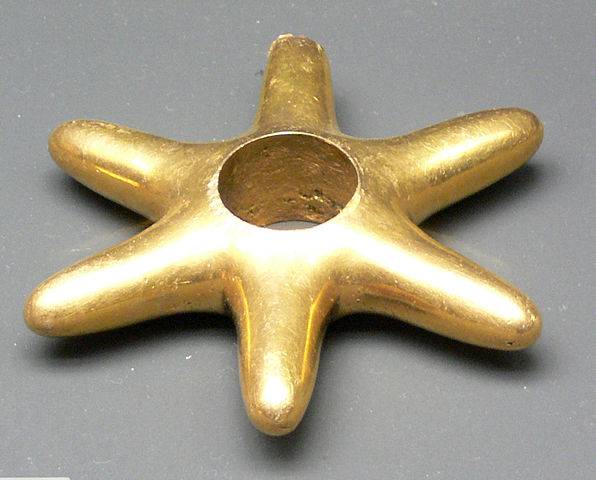 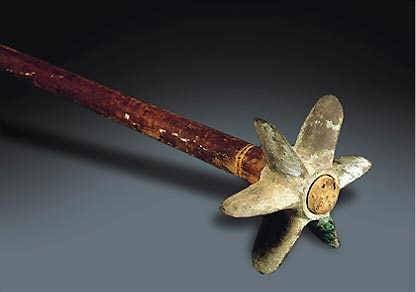 Mace with the top set on it. (Metropolitan Museum, New York) 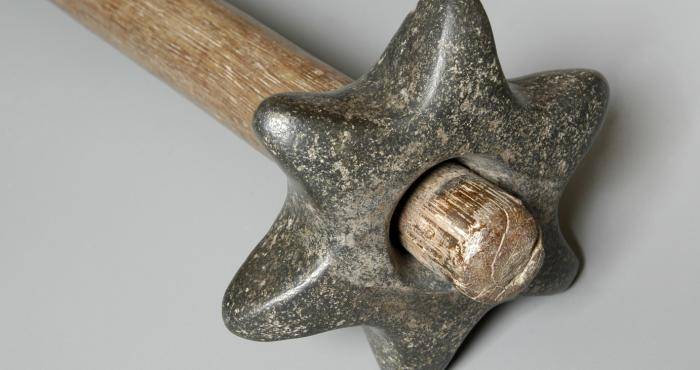 Moreover, the military art of the Incas differed in its essence from the military art of other Indian peoples, including the Aztec and Maya. After all, if they fought in order to capture more prisoners and use them first as slaves, and then sacrifice to their gods, the Incas set as their goal exclusively the seizure of new territory and ... communion of the subjugated to their high culture! Therefore, the Incan wars of conquest were large-scale operations involving thousands of warriors who simply crushed the enemy with their numbers. At the same time, the Incas built powerful fortresses that protected their lands from retaliatory strikes. An important weapon in the hands of the Incas was diplomacy. It was through negotiations and promises of all sorts of good deeds that the Incas managed to subdue many rulers of the surrounding lands and avoid unnecessary bloodshed. And only the arrival of Europeans with their more modern weapons could stop the Inca rulers on the path of expanding their empire. 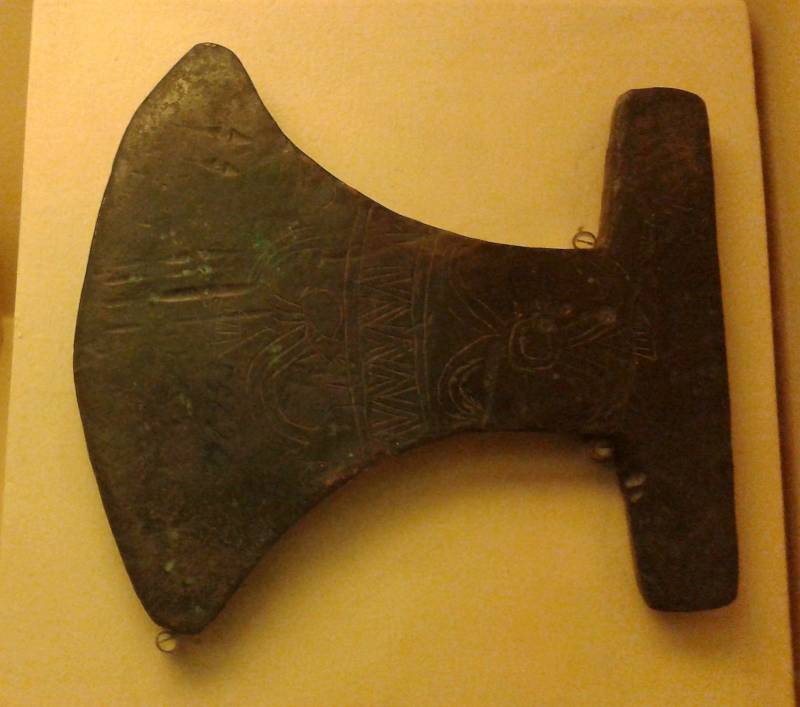 That is, Inca diplomacy always preceded the war! Their ambassadors offered profitable trade agreements to the rulers of adjacent territories, which impressed their imagination with the exchange of gifts, arranged inter-tribal marriages between representatives of the nobility. That is, they carried out a very skillful policy of “soft power”. And only if all these efforts failed, troops were sent against the stubborn ones. Moreover, if at first the Incas sought to defeat the enemy and master his riches, then later they simply sought to control the territory of their neighbors, receive tribute from them, spread their language and customs and thus promote their influence throughout South America.

Moreover, the conquest of contiguous territories was also important in the eyes of the Incas, because in this way the prestige of one or another of their rulers was raised. And not only during his life, but after his death! And it is clear that as each new ruler sought to surpass his predecessors, the empire was continuously expanding throughout stories States of the Sons of the Sun! 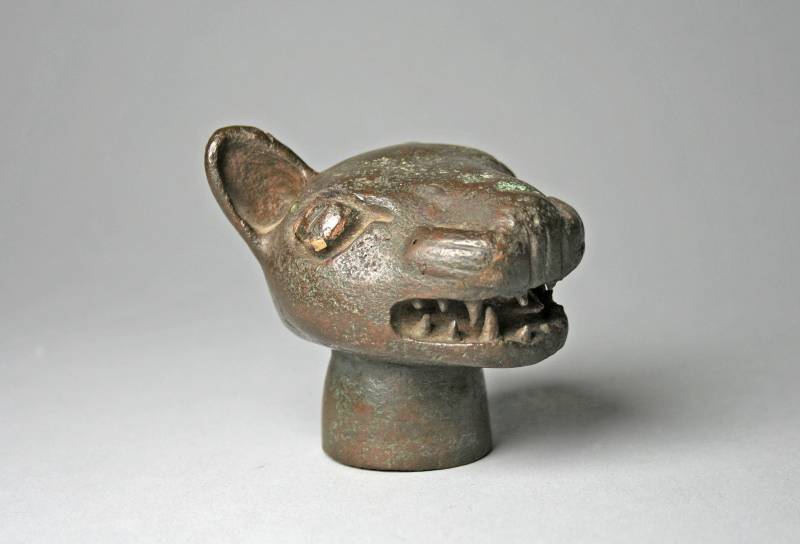 Also the top of the club, but not typical of the Incas. (Metropolitan Museum, New York)

However, this did not mean that the Inca had no religious element in the wars, not at all. The Incas, too, viewed their conquests as a continuation of serving their sun god, Inti. Therefore, for example, a declaration of war was preceded by a two-day fast, followed by a sacrifice of black llamas and even children, and then a mass feast. The priests, like the Aztecs and Mayans, together with the army went on a campaign, were on the battlefield, where they sent some religious rituals during the battle itself. It was necessary to pay attention to numerous signs and follow a variety of prohibitions. For example, it was impossible to fight in the new moon, than the insidious Spaniards often used, fighting with the Indians.

"People of the system"

Interestingly, the Incan army itself consisted mainly of ... non-Incas, and the warriors of the peoples they conquered, and not even the warriors as such, but strong and strong men, given to the Incas by these peoples in the form of tribute. For this reason, the Inca army was a rather strange conglomeration of separate ethnic formations, each commanded by a commander who also belonged to this tribe. And they fought with their traditional weapon. Of course, due to the fact that they spoke different languages, they, most likely, were quite difficult to command. In addition, all these warriors were in fact peasants who fought under duress, and therefore were not very willing. That is why the Incas pretty quickly from such a system of recruiting troops refused and created a real professional army. Tactically, they were divided according to the decimal system, that is, the smallest group consisted of 10 people who were commanded by a chunk of kamayok, of which the detachment was staffed in 100 by a man headed by a pachaka-kuraka, then by 1000 under the command of a kurak lamb and finally tactical unit were 10 000 warriors led by Kunuka Hun. There is information that there were two commanders each in the divisions of the Incan army, but it is not clear how they shared their duties among themselves. 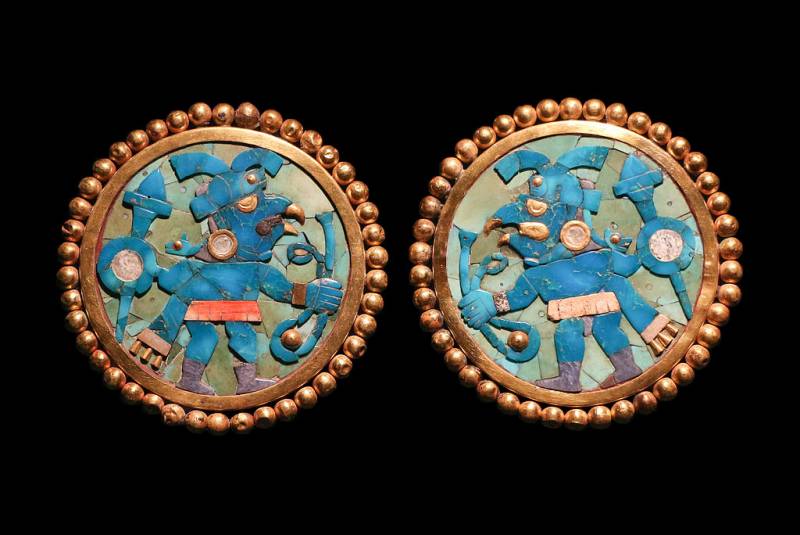 Clips of Moche culture made of gold with turquoise inlay with the image of warriors with spears, shields and slingshot with stones in their hands. (Larco Museum, Lima)

That is, in principle, the Inca army could consist of several tens of thousands of warriors, and in some cases even have more than 100 000 people. The warriors were chosen by lot from the general population from the ages of 25 to 50 years, and, like the miners, they were allowed to take their wives on hikes. The troops also included porters who did not fight, as well as cooks and potters. Moreover, in peacetime, all the Inca boys underwent military training and then participated in ritual battles. From the purebred Inca formed a kind of guard of several thousand people, which served as the protection of the Supreme Inca, and as a difference wore a tunic in black and white with a bright red triangle on the chest.

Author:
Vyacheslav Shpakovsky
Articles from this series:
The first metal of South America (part of 1)