November 9, 2018
31
The press service of the Ukroboronprom recently reported that the Ukrainian army received the first seven BTR-4 armored personnel carriers, the corps of which are made of new domestic armor, and that the Lazovsky forging-mechanical plant has established production cooperation for the production of armored corps BTR-4 and their further assembly at the Malyshev plant and the Kiev armored plant. 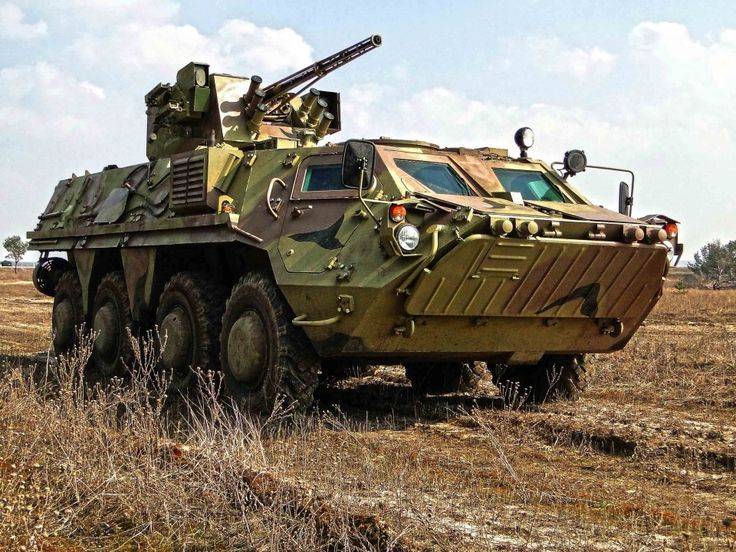 Scandalous история With these armored personnel carriers and armor for them - a long and already forgotten. It all started in September, 2009 with the conclusion of a contract between the Ministry of Defense of Iraq and the Ukrainian state-owned concern Ukrspetsexport, which subsequently entered Ukroboronprom, for the supply of 429 BTR-4 Ukrainian production to Iraq in the amount of $ 457,5 million.

The most interesting, payment under this contract was to be made at the expense of funds allocated by the US government as part of the rearmament of the army of Iraq. Therefore, the United States closely monitored its implementation, and Ukrainian corrupt officials could not hush up the failure of this contract.

Considering that the money was allocated by the United States to pay for this contract, a trial began there, clarifying where the money disappeared. During the trial, it turned out that the corruption scheme under this contract involved mediators from the United States, the management of Ukrspetsexport and the Iraqi military. Through a number of offshore companies registered in the British Virgin Islands, considerable commissions were transferred to the participants of this scheme. The contract laid serious money for marketing research on the contract, and they were paid. Someone from the participants of the scheme, apparently, did not receive the commissions due, and all this received international publicity.

The Ukrainian-Iraqi contract was terminated at the beginning of 2014, and this batch of armored personnel carriers eventually returned to Ukraine. At least, the Ukrainian participants of this scam got off lightly and did not suffer almost any punishment. And the state of Ukraine had to return the prepayment and pay a huge penalty for non-compliance with the terms of the contract, since it was given state guarantees.

In addition to the corruption component, there was also a technical problem: the armored personnel carriers turned out to be really unworkable, many people knew about the cracks in the armor in their hulls, but all this was covered by the participants in the deal.

The developer and manufacturer of the BTR-4 was the Kharkov Design Bureau of Mechanical Engineering named after Morozov (KHMB), which previously was engaged in the development of only tanks, lightly armored tracked vehicles and especially wheeled design bricks have never been developed. There was no experience in such developments, and literally the day before, the Dozor armored car and the BTR-3 armored personnel carrier were developed and their small batches were made.

At the very beginning of the epic with the Iraqi contract, they showed me in KB the first two samples of the BTR-4. Their assembly was just completed, they had never left the workshop, and moreover no tests were carried out, and they were going to be delivered under an international contract! I was very surprised that the tests of this technique go on for years. Inevitable malfunctions and defects are identified, improvements are made, only after this the car is given a start in life. Here, everything was unnatural, apparently, to advance the Iraqi contract, the BTR-4 was rapidly adopted without a full test cycle.

The main technical problem of the BTR-4 was the cracks not only in the welds of the hulls, but also the cracks in the armor itself. In Ukraine, which previously produced all types of necessary armor, there were already problems with the quality of the armor produced. At 2014, plant manager Malysheva said: “Questions may be on armor. But we are deciding this, focusing on the Europeans. Most likely, in the near future we will have European armor ... "They considered that Europe would help.

The supply of armor for tanks and MTLB from Soviet times was made by Mariupol Azovmash, which was brought to the bankruptcy stage by the efforts of the Donetsk oligarchy and ceased production of armor. He found a replacement. Armor came from incomprehensible suppliers with unknown quality, and during the production of armored vehicles, scandals constantly arose, as was the case at the Kiev tank repair and Lviv tank repair plants when producing the BTR-3 armored personnel carrier and the Dozor armored car.

At the Lviv armored plant for armored vehicles used armor from Poland, but with her there were problems, she cracked for testing. At the beginning of the 2015, when testing the first samples of an armored car in the hulls of two of the three armored cars, “through cracks with a length of about 40 – 50 cm appeared in the engine location area on the bottoms. At the same time, the cars on which the cracks were found went a little over 400 and 100 km. ”

From the same incomprehensible quality of armor were made corps BTR-4, delivered to Iraq. Under the contract, the BTR-4 was to be supplied to the KMDB, which does not have its own production base for welding of shells. The production of the hulls was transferred not to the Malyshev plant, which always welded the tank hulls, but to the Lozovsky forging-mechanical plant, which in the long Soviet times had been welding the MTLB hulls produced by the Kharkov Tractor Plant.

At LKMZ, by that time, the technology of carrying out such works and traditions of military acceptance were lost, which led to disastrous results. Instead of the required armor, armor of unknown quality was used, while welding other wire was used that was not provided for in the documentation. In 2017, a criminal case was opened against the LKMZ only on the fact of using another wire when welding cases. The criminal case, apparently, ended in nothing, since, in accordance with the information given at the beginning of the article, the welding of the BTR-4 hull continues at LKMZ.

Nine years later, in Ukraine, they suddenly declared that their own “domestic armor” had appeared, although it had been produced there for a long time, and its production was destroyed. It is difficult to say who was attracted to the production of armor and its quality. Time will tell how serious it is. After corruption deals and technical blunders in the development, testing and production of the BTR-4, they are trying to revive it. Over the years there have been many scandals, recriminations and attempts to hide the identified technical shortcomings of this vehicle with an armored personnel carrier.

Now the BTR-4 has passed many types of tests, including in real combat conditions, and as far as this machine meets the requirements for it, time will tell. After such a trail of failures, it is unlikely to succeed in breaking through to the international arms market. The victorious statements about the solution of the reservation problem are still required to prove, in Ukraine, the statements very often do not correspond to real cases, and the epic with the delivery of the BTR-4 to Iraq clearly showed what adventures Ukrainian officials and supporting their power structures are ready to get involved in.