31 May 2012
114
Despite the lack of an alternative, Anatoly Serdyukov does not want to hear about new purchases of felt shoes, in which the fathers and grandfathers of the current soldiers beat the enemy 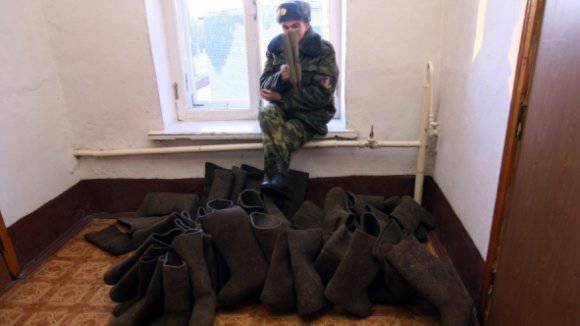 The Ministry of Defense refused to buy for the soldiers the most famous Russian winter shoes - felt boots. As told to Izvestia in the Ministry of Defense, the reason for this was “an excess in the stocks of felt boots left over from Soviet times.” However, when the stocks run out, the soldiers will have to go in the fierce frosts of army boots - berets - and kersey boots: now the military has no alternative to felt boots.

New models of boots were forbidden for the Minister of Defense Anatoly Serdyukov to buy personally, sources in the Ministry of Defense told Izvestia. At a recent meeting, the minister sharply commented on the development of this type of winter footwear for the troops.

“The generals reported to him about new developments, but he did not want to listen to them,” a meeting participant told Izvestia. At the same time, the minister didn’t argue his dislike for boots.

It is noteworthy that now for soldiers-conscripts no winter shoes, except for boots, is not yet provided.

- For officers there are winter boots with fur, and for soldiers there are berets, tarpaulin boots and, for hard frosts, felt boots. The decision on which shoes to wear is made by the commanders of the units according to the weather, the representative of the Ministry of Defense explained.

It was expected that the new boots, designed specifically for the army, will be tested by the end of the year and will begin deliveries to the troops in 2013 year.

Grigory Shmykov, deputy director of the Yaroslavl factory of felted shoes, the only producer of army boots, confirmed to Izvestia that the purchase of felt boots for the army was stopped.

“As explained to us, all the warehouses are already overwhelmed since Soviet times,” Shmykov explained.

“The presence of reserves plus a reduction in the total number of troops due to a reduction in conscription has led to the fact that the need for felt boots has disappeared,” the source told Izvestia, the reason for the refusal to purchase felt boots. At the same time, the General Staff told Izvestia that the strategic stocks of felt boots would end in the 2013 – 2014 year, “depending on how they will be worn”.

- On average, the boots are designed for several seasons, so for the next year or two there will be enough boots. But then the reserves, of course, will run out if they are not replenished, - explained the representative of the General Staff.

However, manufacturers hope that when strategic reserves come to an end, purchases will resume. In this case, the factory will have to increase production: now almost 70% of the factory’s products are felt boots for various special services, large mining and transport companies that buy these shoes for their employees who are forced to work in the cold outside. To dress the army, the factory will have to seriously increase output.

- The production technology of felt boots has not changed, however, we offer instead of traditional rubber soles polyurethane, which makes felt boots almost 600 g easier. Considering that traditionally army boots are thicker and warmer than civil ones, this makes shoes much easier. In addition, due to the bubbles, polyurethane keeps heat better than rubber, - explained Shmykov.

According to him, felt boots without soles can be supplied to the troops at the price of 600 – 800 rubles, with rubber soles — 850 – 1,1 thousand rubles. At the same time, felt boots with a polyurethane sole are cheaper than rubber ones.

The situation with the supply of boots is complicated by the fact that there are no GOSTs on the polyurethane sole. Therefore, before the procurement of the military to develop and adopt a new standard. And this can take considerable time.

The Defense Ministry told Izvestia that they were ready to place an order for felt boots within a month after the warehouses were empty.

- We have a reserve for an emergency. If suddenly the boots suddenly run out, we will purchase them within a month, - explained the representative of the Ministry of Defense.

He stressed that when placing an order, the military will take into account the potential of the industry, which, according to their calculations, needs “3 – 4 of the month for production promotion”.