Who is crazy? Magnificent steel detective

November 3, 2018
20
Detective история, which unfolds before our eyes, but risks to go unnoticed and undervalued. And the author of it is the Prosecutor General of Ukraine, Mr. Lutsenko. 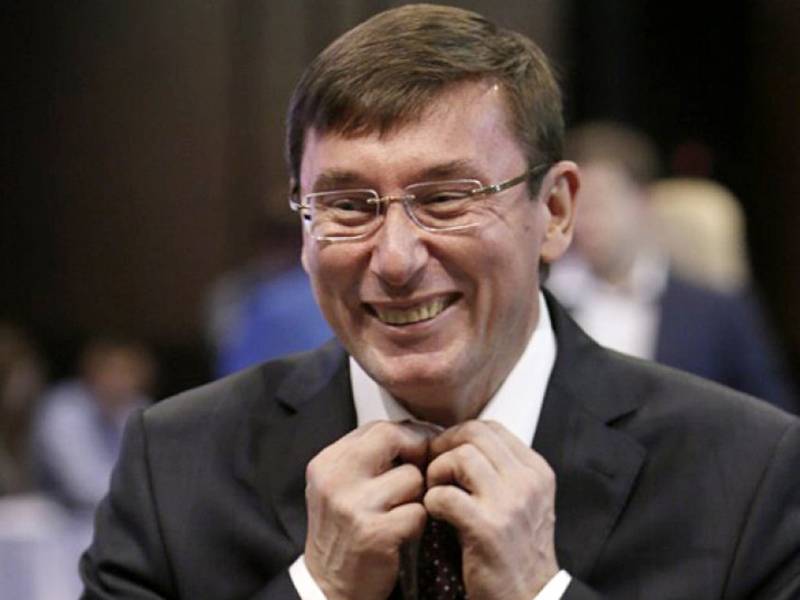 Ukrainian authorities arrested more than 3 thousand tons of Alchevsk Iron and Steel Works (steel sheets) at the port of Mariupol. The combine, if someone does not remember, is located on the territory of the Lugansk People's Republic.

On Peremogh 1 November, said the Prosecutor General of Ukraine Yuriy Lutsenko in his "Facebook". 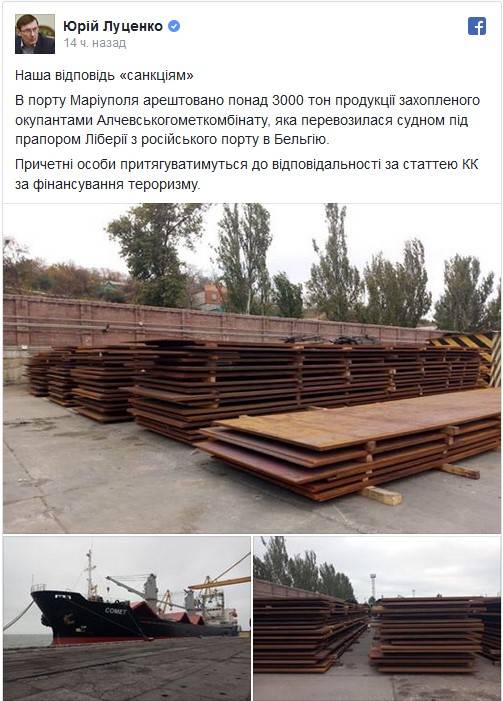 However, after a day, questions began.

And they were caused by “secret data” not leaked to the media, but by the most elementary media reports. Moreover, I emphasize boldly - messages in the Ukrainian media.

And Peremoga, as always, begins to shift, if not to my senses, then in general, do not understand that it is blue and yellow. However, judge for yourself.

If you translate Lutsenko into Russian, you get the following:

The arrested cargo was transported by ship under the flag of Liberia from the “Russian port” to Belgium. 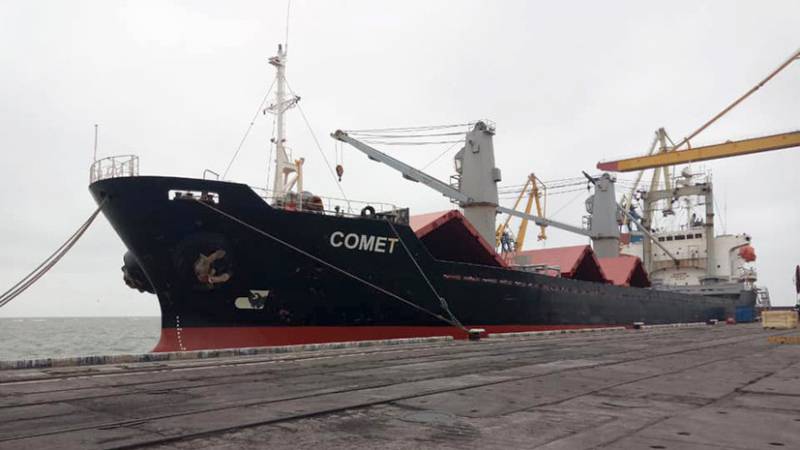 Well, peremoga the same? "Their answer" to Russian sanctions and all that.

However, given that the devil is in the details, I take them (the devil and the details) out of my pocket and start asking smart questions.

First, we look at the photos that Mr. Prosecutor kindly provided us.

First - the ship. The name is clearly visible: “Comet”. "Comet", if translated from German.

And the operator of the vessel is quite a German company Blumenthal JMK from Hamburg. Among sailors, the company enjoys not very good fame, apparently, also because the Germans rule in cooperation with the Filipinos, because there is chaos, deception, robbery. On the specialized forums mat-peremat worth. 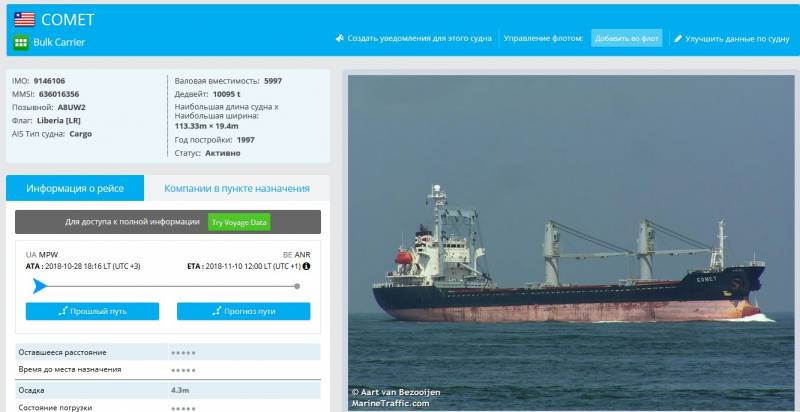 But - shipowners absolutely do not bother about the cargo. In terms of his righteousness, correctness, documents and other things. 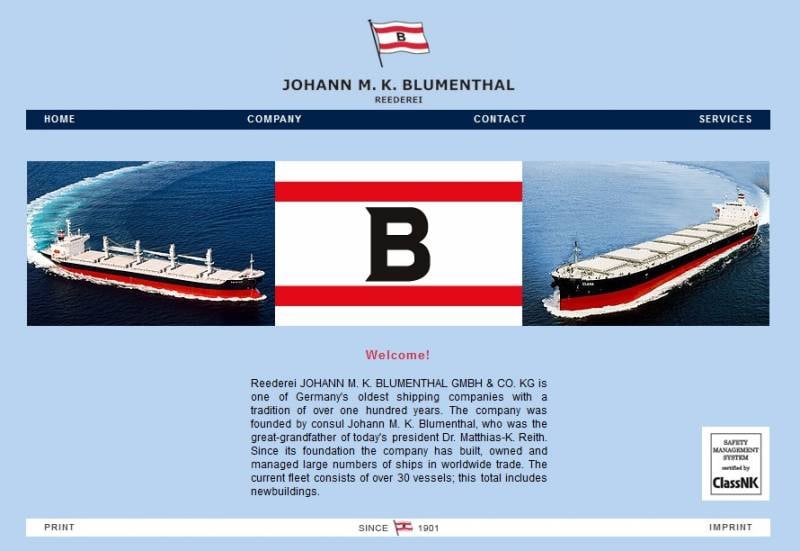 By the way, Lutsenko did not say whether the ship was arrested. Cargo - arrested, what about the ship? It is clear that most likely they will not arrest. Against the Germans, while Ukrainian does not shine anything. 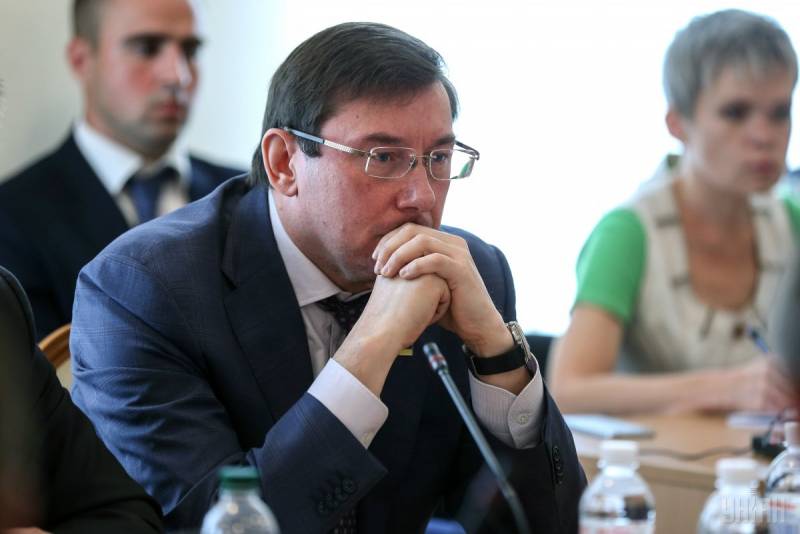 And then we have miracles on the turns begin.

There are a number of portals that allow you to track the movement of ships and vessels. MarineTraffic, VesselFinder, AIS tracker, for example. I used the first one.

So, "Comet" entered the port of Mariupol still 28 October. Yes, the previous port, in which the vessel called, was really Russian Temryuk (Krasnodar Territory). And here miracles begin.

The Ukrainian authorities arrested in the port of Mariupol 3 000 tons of products from the Alchevsk Iron and Steel Works, which were carrying the ship Kometa from the Russian port.

Feel the birth of a tsunami ukrobreda? And I also feel. 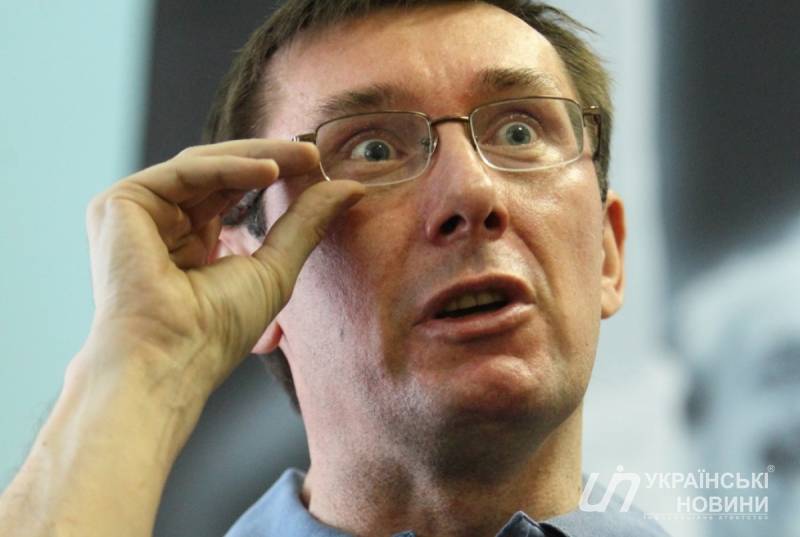 The fact that 3 000 tons (and this is a bunch rather big) from Alchevsk someone (or something) moved to Temryuk ... There is only one question: why Temryuk? Not Yeisk, not Taganrog, which will be pretty close?

No, it is clear that the Russian soul is darkness, and we could send Alchevsk metal from Sukhumi. In order to disguise. But nonetheless.

But we have what Mr. Prosecutor Lutsenko has. And he has us in the brain, not at all embarrassed.

So, the crew of the Comet plunged incomprehensibly like Alchevsk car hire in Temryuk and came to Mariupol. Where, somehow, Ukrainian customs officers discovered the stolen metal and arrested him.

And what, well done, the service is carried.

You can still speak to the Russians, who so nicely set up the crew of the Comet.

But if you scratch your head, and even remember how things are with the transport in the LC, and estimate how cheap it is possible to transport tons of rolled metal to the 3 000 port ... 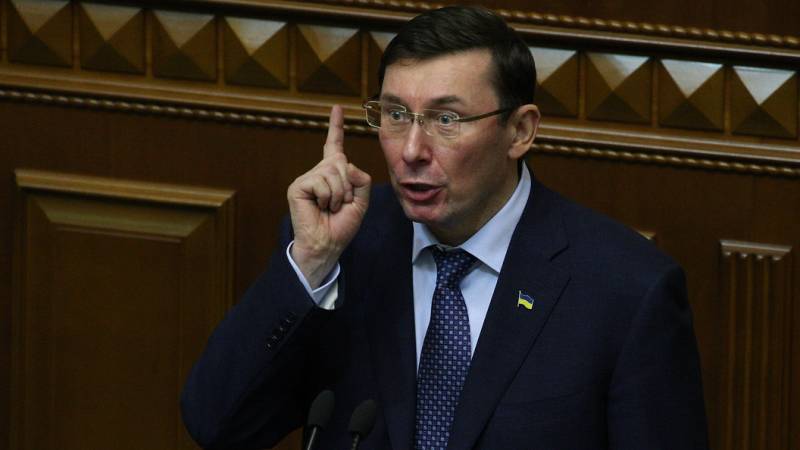 And it turns out that Mr. Lutsenko is lying like on the eve of the election.

Just to transport so much metal to Russia is a problem, because there is no railway connection as such. Well, just not there. There are many reasons, but they are not interesting for us now. It’s a fact that everything has been brought to the republic by motor transport since that time, and the situation has not changed at all.

How much should you be an economic idiot in order to transfer a few hundred kilometers from Alchevsk to Temryuk metal using motor transport, Mr. Lutsenko? 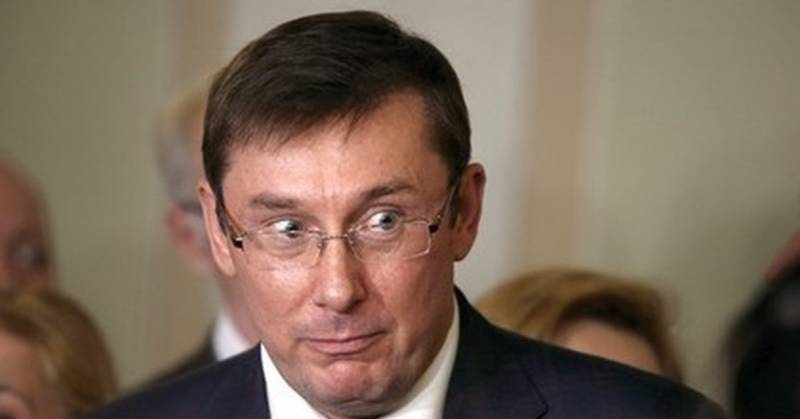 Probably, you need to be Mr. Lutsenko, no less.

But from Alchevsk to Mariupol less than 200 kilometers. And (if you really need) railway communication may be formed. This is a fact that is not spoken out loud on both sides of the front line, but ...

But the presence of Alchevsk metal in Mariupol is much more logical than in Temryuk. Moreover, from the very beginning of the Donbass events, Alchevsk rolled out from Mariupol to consumers. Especially foreign.

At one time, one commander of the national militia spent a lot of nerves trying to straddle the Alchevsk plant and stop its foreign economic activity. But did not succeed.

And the rental continued to be produced and left to consumers. All along the same lines Alchevsk - Mariupol - the sea - the consumer. Why invent something new if the old one works great?

By the way, Lutsenko’s photo evidence from his page confirms this. If you look closely at the rolled sheets, it will become clear to any more or less understanding person that for a long time nobody touched these sheets. Long lie. And they are completely different from the sheets that were pulled back and forth with cranes, from the platform to the warehouse, from the warehouse to the ship, from the ship to this site. 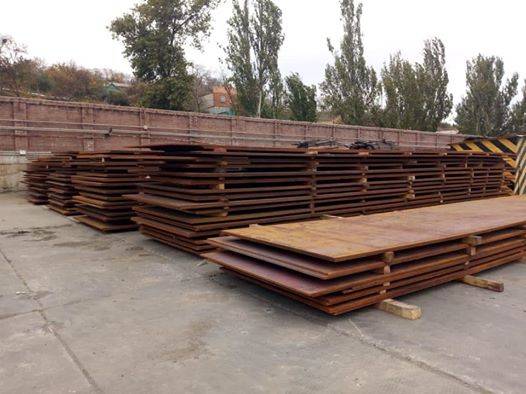 On the contrary, it seems quite normal that something was taken from the last pack.

Does not agree with you, Mr. Lutsenko. 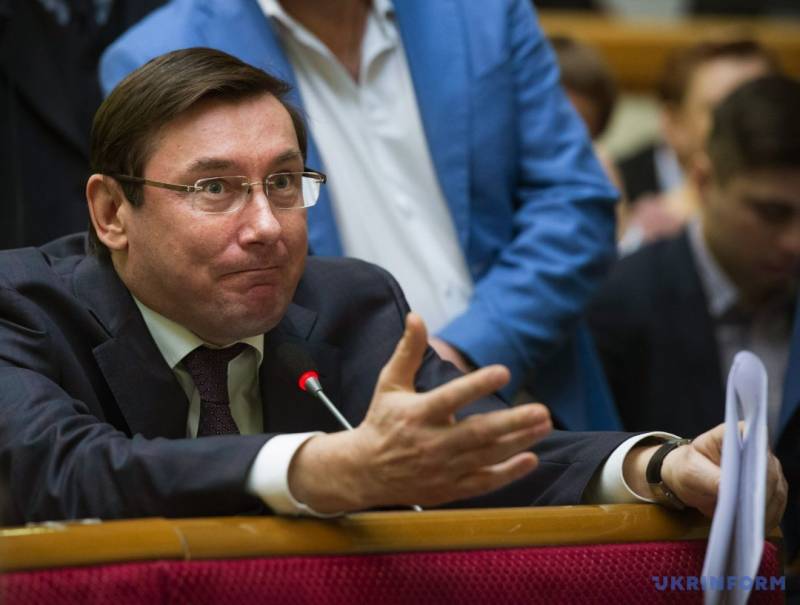 Unless, of course, assume that this is a photo in Temryuk. And there simply rust metal deposits from Alchevsk. But we do not believe in such miracles, we believe that according to the "gray" schemes the metal from Alchevsk, as always, got to Mariupol, and there the customs officers grabbed it for peremoga.

By the way, quite logical. That which is immersed in the "Comet" will go (well, I have no doubt about it) to Belgium, but that did not fit, the remnants are now solemnly arrested.

Well, nothing else traces of loading parts of the metal, I will not explain. Like the fact that a bunch of 3 000 tons by no means pulls.

In general, the next Peremoga again turned into a zrad. What is generally not surprising, because consistency is a sign of mastery. And in the zrady Ukrainian rulers fly just with enviable constancy. 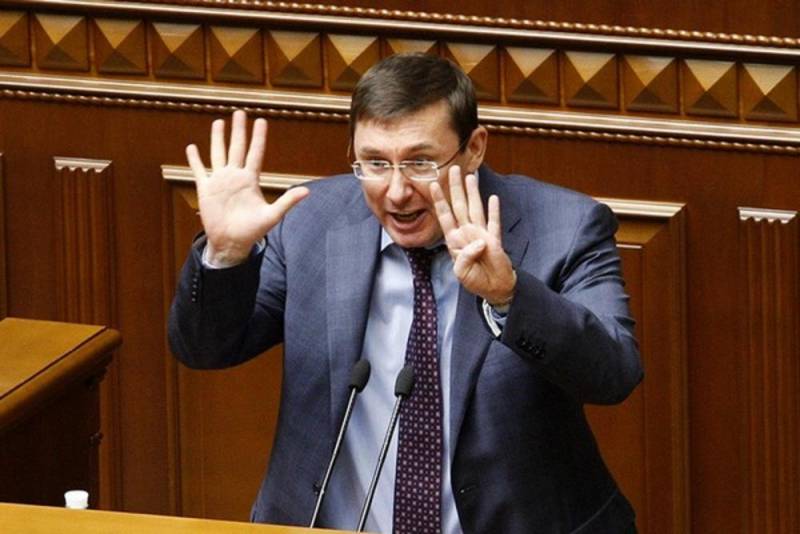 What, in fact, congratulations to Mr. Lutsenko!