8 2012 June
14
The firm "Steyr" (later "Steyr-Daimler-Pooh"), in close cooperation with the Austrian army, developed the StG-77 assault rifle. In 1978, the first batches of this rifle entered the troops. The rifle was built according to a modular scheme that allowed it to be quickly converted to other types. weapons. This rifle is better known under the designation AUG (Armee Universal Gewehr - "Army Universal Rifle" or "Universal Army Weapon"). The AUG 5,56-mm family of weapons includes: a shortened machine gun (barrel length is 350 mm), carbine (407 barrel mm), assault rifle (508 barrel mm), light machine gun (has a heavy barrel, its length is 621 mm). In all versions, 30 ammunition stores are used for cartridges, and the 42 cartridge magazine is also used in the light machine gun. All weapons are equipped with an optical sight, made with a carrying handle. 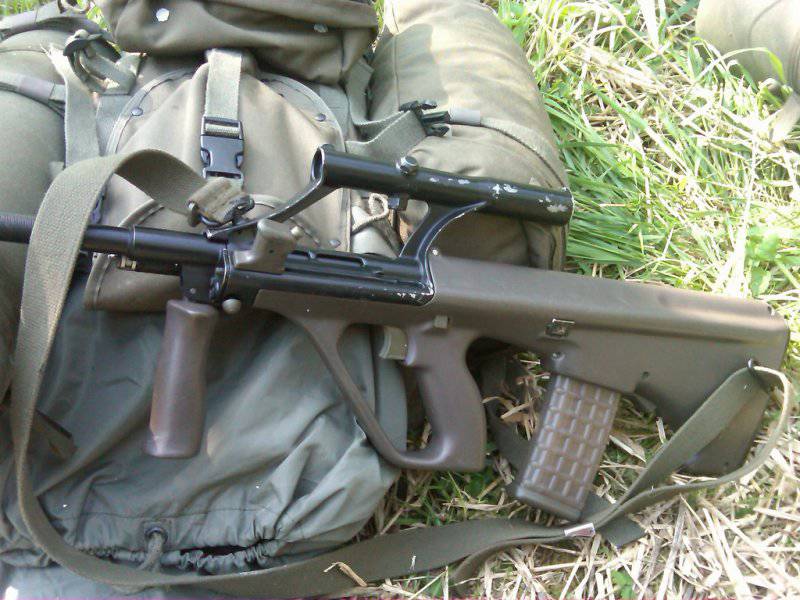 The idea laid by the developers was to create a modular weapon that is easy to handle and carry, which can be used on combat vehicles, and its details will make it easy to change its configuration. So, for the implementation of the fire from the left shoulder, it was necessary to rearrange the ejector, and also to turn the cover of the window of the ejector sleeve. This simple operation could be carried out in the field. In many ways, AUG was the first: the first modular system, the first weapon of the “bullpup” scheme that went into production and entered service, the first production model that had optical as the main sight and a wide use in plastics construction. The wide butt, which also gives support to the cheek of the shooter, makes it possible to conveniently attach a weapon to shooters having a different build. 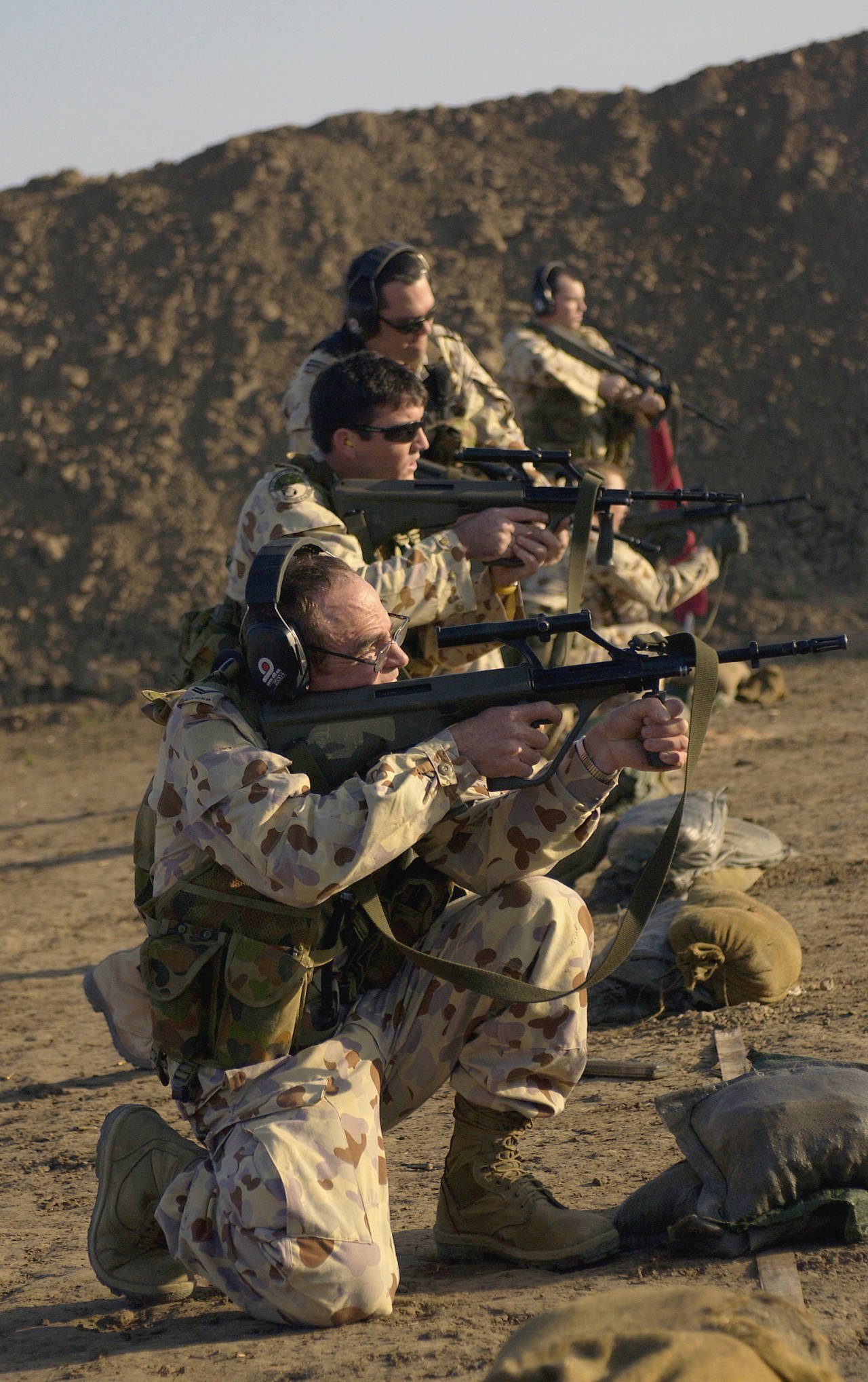 The design of the weapon includes six modules (parts): the barrel (without or without bipods), receiver, trigger, bolt, butt (box) and the store. The barrel is made by cold rotational forging, which was developed by Steyr, and is chrome-plated. On the trunk is mounted outer sleeve, which is worn in a hot condition. A gas vent, a gas regulator and a chamber are made in the coupling. The coupling is equipped with an articulated arm for holding the front handle. The gas piston and the return spring associated with it are located in the gas chamber. The eight protrusions of the breech breech engage with the locking sleeve of the receiver. This clutch at the rear engages with the bolt. To the gas regulator, the front hold handle is pivotally attached and can lean back under the barrel (forward), playing the role of the forearm. The hold handle is used when replacing the barrel. The receiver is manufactured by high-pressure casting from aluminum. There is a slot for the cocking handle on the left side. Carrying handle and scope are made with the receiver.

In the AUG automatics, the scheme of removal of powder gases from the barrel is implemented. Unusual for this system is the shift to the right of the gas chamber and the installation of the piston on one of the guide rods. The gas regulator can be in two positions - an enlarged orifice is used when the mechanism is contaminated. The barrel was locked by turning the bolt with seven lugs, instead of the eighth bulge, the ejector. The shutter is actuated during movement of the bolt protrusion in the slot of the bolt carrier. It has a pair of guide rods with return springs inside. The rods are in the grooves made on the receiver. The left rod engages with the latch with the cocking handle; in this case, the bolt can be manually returned to the initial position, although the handle does not move when fired. The gas piston rod - the right rod, the left rod - is used when cleaning the gun to clean the gas chamber. 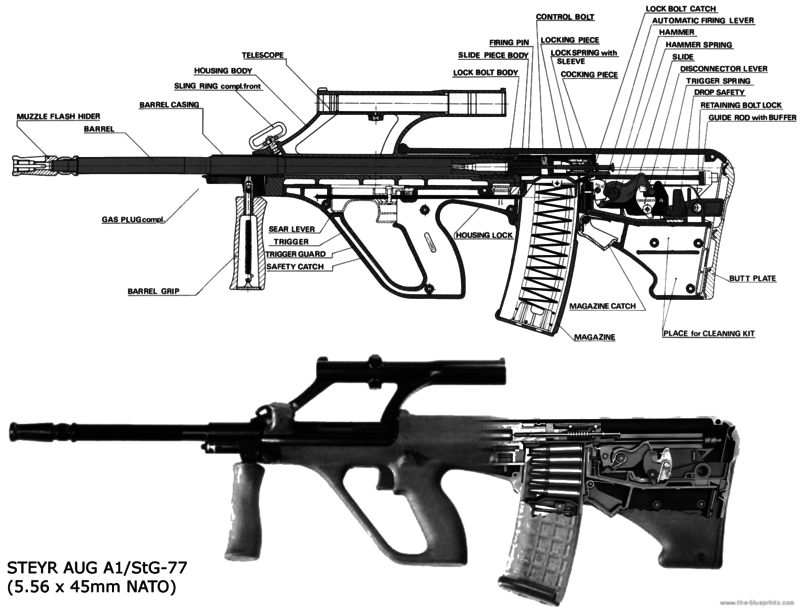 USM assembled is mounted in the housing through the hole in the butt. The hole is closed with a rubber grip. A special feature of the trigger is that its parts, except axles and springs, are made of plastics and are enclosed in an open plastic case located between the butt butt strap and the magazine. The bolt assembly moves over this housing. The force from the trigger is transmitted to the sear through double pull rods running along the sides of the store. Under the action of a coil spring, the plastic trigger hits the firing pin. There is no fire mode translator. Shooting with single shots is carried out while the trigger is not fully pressed before the initial trigger release. When the trigger was fully pressed, the sear worked in continuous fire mode. It demanded certain skills from the shooter. Self-timer is not allowed to produce a shot until the gate is completely locked with the barrel. The principle of operation is changed by installing another type of trigger. On the pistol grip mounted trigger, equipped with two rods running along the window of the store along the guides. Above the handle there is a button fuse. Locking triggering occurs when the button is pressed to the right.

The store is made of plastic (except for the spring and the feeder). The body of the store to be transparent, which ensures control over the consumption of cartridges. Butt (bed) - a single molded part. In its front part there is a pistol grip with a trigger guard into which the whole hand of the shooter fits. The latch located in front of the magazine receiver serves to detach the receiver from the butt. Above the receiver there is a pair of windows serving to eject spent cartridges, one of the windows is closed with a plastic lid. The channel for the movement of the shutter and the trigger mechanism is installed in the rear part of the butt. The swivel pin is attached to the back of the stock. 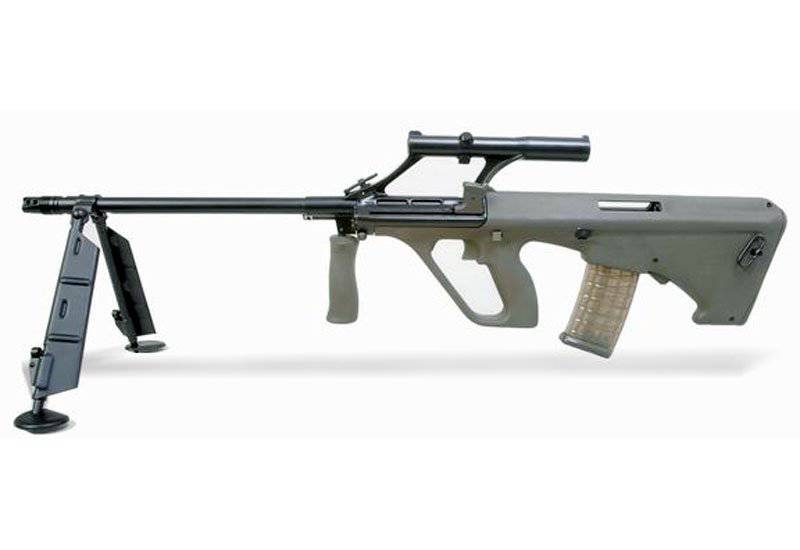 The 1,5-fold optical sight has a grid in the form of black rings, which can be aimed at a human figure at a short period of time up to 300 meters. In this case, the goal must be kept in the center of the circle. In addition, a constant mechanical sight is used on the upper surface of the sight for quick pick-up during close combat. A special receiver box that has a flat bracket in place of an optical sight allows you to use all types of optical, collimator and night sights, including sixfold ZF 69.

For firing blank cartridges in the flame arrester screwed device that overlapped the muzzle of the barrel so that the pressure of the powder gases allowed the work of automation. The muzzle of the assault rifle can be equipped with bipods with a device for cutting the wire - "ersatz" light machine gun. 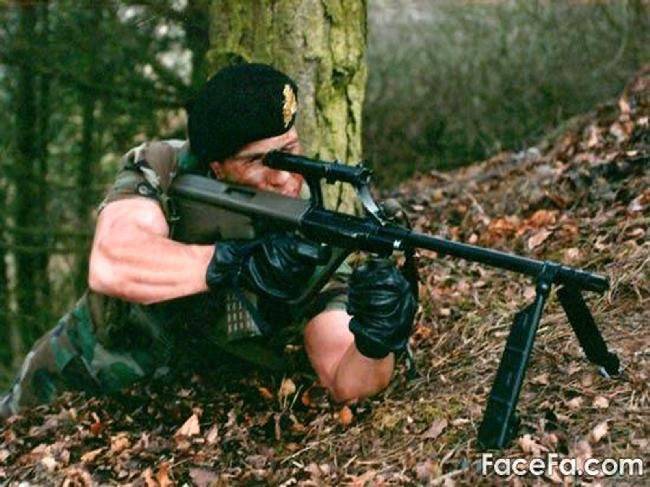 Light machine guns of the AUG "Steyr" family are united under the name "5,56-mm universal fire support system". These light machine guns are made in various versions. The machine gun fire from which is carried out with the shutter closed is called "heavy automatic rifle." A machine gun fire from which is conducted from the rear sear (with the shutter open) is known as a “machine gun”. Replaceable barrels with cutting pitch 305 mm, 228 mm or 178 mm (depending on the used cartridge) are provided for both options. On the muzzle of the trunk establishes a complex device that plays the role of a muzzle brake, flame arrester and compensator, reducing when shooting bursts of weapons withdrawal. Foldable bipod, adjustable in height, attached to the trunk. These machine guns were made from 1980 year and offered to the external market.

There are two main models of light machine guns: LMG and LMG-T (AUG / HBAR and AUG / HBAR / T - where the letters HB mean “heavy barrel”). The LMG machine gun is equipped with a conventional carrying handle and has an integrated telescopic sight. The LMG-T machine gun has an excellent receiver shape, to which, instead of a sight and a carrying handle, a bar is attached, which is the base for mounting a night or telescopic sight. In both versions of the machine guns, changes may be made that allow firing from the rear sear. At the same time, a new USM assembly is installed in the stock module, and the slide frame module is equipped with a new handle. Details for these changes are supplied by the manufacturer, it takes less than a minute to install them. The new assembly USM is also suitable for installation in previously released AUG copies. Shooting from the rear whisper on the combat characteristics of the weapon does not affect. Changes to models in which the fire is fired with the shutter open are not possible. 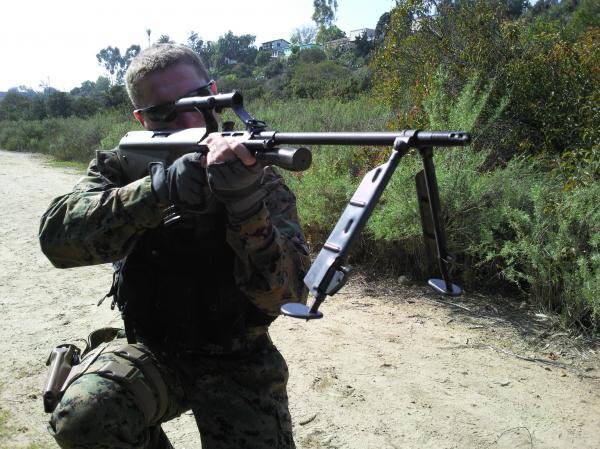 Apart from Austria, the AUG weapon system was adopted by the armies of Australia, Morocco, Indonesia, Oman, New Zealand, Saudi Arabia, and the Irish Defense Forces. In most cases, customers are attracted to the options of the carbine and rifle, however, not a light machine gun. Australia, for example, by adopting an AUG rifle, chose the Belgian Minimi as a light machine gun.