October 31 2018
37
The progress of the entire project gives reason to believe that the entire history SLS Americans were only based on the principle “to be” - there seems to be no real need for launching such heavy rockets at the moment. I had to invent them on the go.


So, in the first manifesto of 2013 of the year, only three missions were announced, which were planned before the 2032 of the year. Their list included one launch of a rocket with an unmanned spacecraft in 2017 to fly around the moon (EM-1), a similar mission, only already in 2021 and astronauts on board (EM-2), and finally, in the 2032 area of ​​the year they planned send a drone to mars. The strangeness of this plan is that in order to maintain the reproducibility of the most complex technological processes and to maintain a high level of rocket reliability, space must be sent at least 1 times a year. And here in 15 for years, only three starts ...

2016 has come the year, and with it the sobering up against the background of real results. Inspirational inspirers again revised their plan. Now there is a desire to send a drone to the moon in November 2018 of the year. The automatic ship was supposed to fly to Earth orbit in 25 days, and then go to the Moon and return Orion to Earth. Between the end of 2021 of the year and the beginning of 2023 of the year, the Americans planned to equip a manned mission to the moon under the abbreviation EM-2. In the low orbit of our natural satellite was supposed to spend from 3 to 6 days, but there turned out to be many embodiments. William Gestenmayer, deputy head of NASA for manned programs, once at a meeting of the Agency's Advisory Board announced that the flight could be completed in a special, cost-effective way. In accordance with the idea, the expedition will set off along a trajectory that does not require the inclusion of engines for reaching the circumlunar orbit, and will return on a similar principle. Such a focus even gave the name: “Minimal mission with multiple impulses of departure to the Moon and free return”. Whether this fantasy becomes a reality, time will tell, but for the time being calculations are being made and testing is being prepared in near-Earth space. 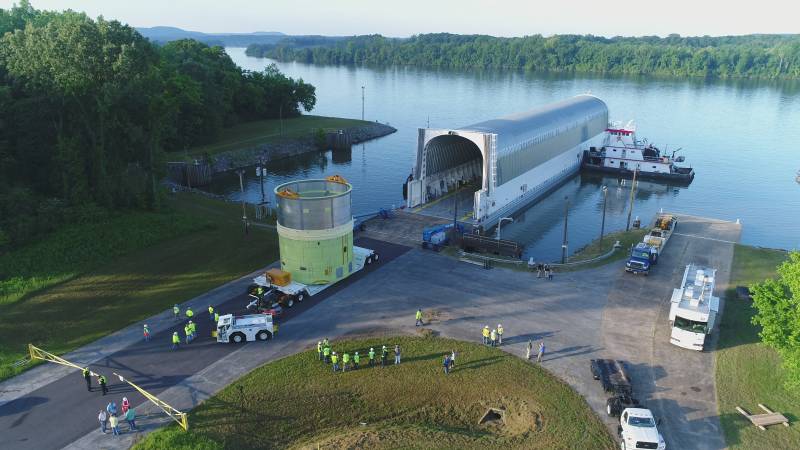 The EM-6 mission is planned for the most unusual in the history of SLS, as it is aimed at exploring a small near-Earth asteroid previously delivered to the lunar orbit. They want to do this so quickly that they are even ready to send a real live American astronaut instead of a submachine gun. So far these are only plans dated 2016 by the year and having a very shaky foundation. Professor John Johnson Freese of the United States Naval College is pessimistic: “In the coming years, with the new president and Congress, anything can happen. Perhaps because of the government’s decisions, we’ll have to give up dreams of Mars and focus on building a space base somewhere close to home. Some figures in Washington have almost a pathological nostalgia for flying to the moon. ”

Perhaps it was the capture of the asteroid that was the most promising direction for realizing the enormous potential of the SLS - the project would provide an answer to the origin of the solar system. But most importantly, such a race for an asteroid would give skills in repelling an asteroid threat by redirecting space bodies from the Earth or even their destruction. However, Donald Trump came to power, and all good intentions covered up. 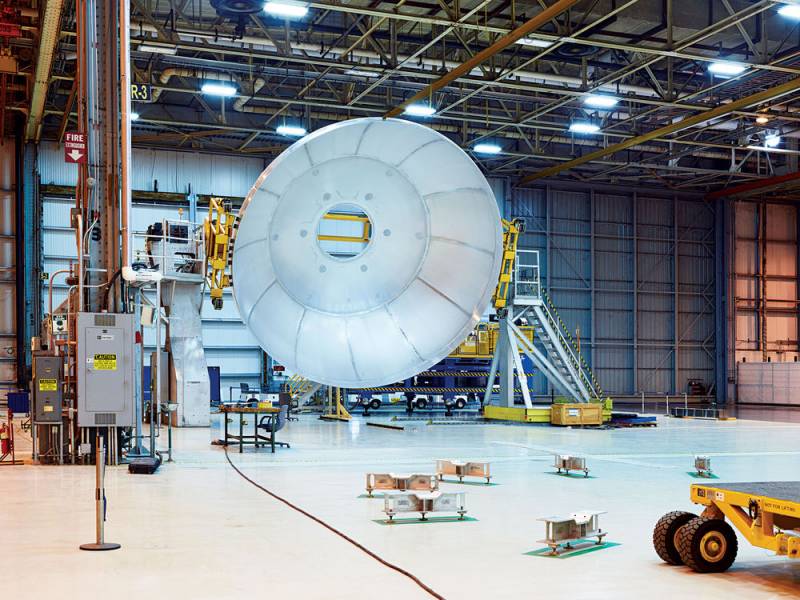 Under the new president, infrastructure development was closely pursued. The fact is that SLS Block I has not passed NASA certification for manned flight, and this can take more than one year. Therefore, they are preparing Block IB, which requires a mobile tower for landing astronauts, which also serves as a farm for maintenance. It will also take at least 4 years. And only in March of the current year, after long meetings, we managed to get money for such an expensive project from the Trump administration.

The story of throwing Americans for the purpose of the SLS project does not end there. In September 2017 of the year appeared DSG (Deep Space Gateway) “Portal to deep space”, which was renamed LOP-G (Lunar Orbital Platform - Gateway) “Lunar orbital platform - portal” at the beginning of 2018. 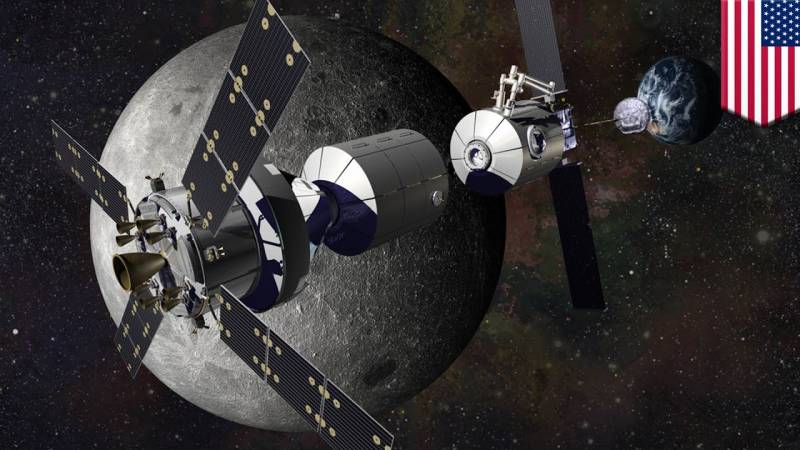 In accordance with the program, the Americans will build a transshipment base for flights to the Moon (an intermediate stop) and an entire space plant for assembling ships from separate modules. That's it for such hyper-ambitious projects that they decided to reshape the SLS flight program. The strangeness of this whole undertaking in the very need to build such transshipment stations - by space measures to the moon at hand. Why invest billions, if you can fly and one march-throw? Much more logical would be the construction of such an object on the way to Mars, but then the money would be spent on a completely different scale. In general, the whole idea with DSG and late LOP-G seems to be exclusively like the image project of the Trump administration, which may well be abandoned halfway through.

Experts are trying to soberly assess the investments of the American people in the SLS and agree that at least 2017 billion dollars left before 9 year. And all the research and development on the topic of the rocket will be completely transferred to 35 billion dollars. Now NASA already has certain difficulties in work - it is necessary to convince the public of the country that there is absolutely nothing without SLS in space. That is why they rush about in search of the most beautiful outer wrapper of the hyperproject. 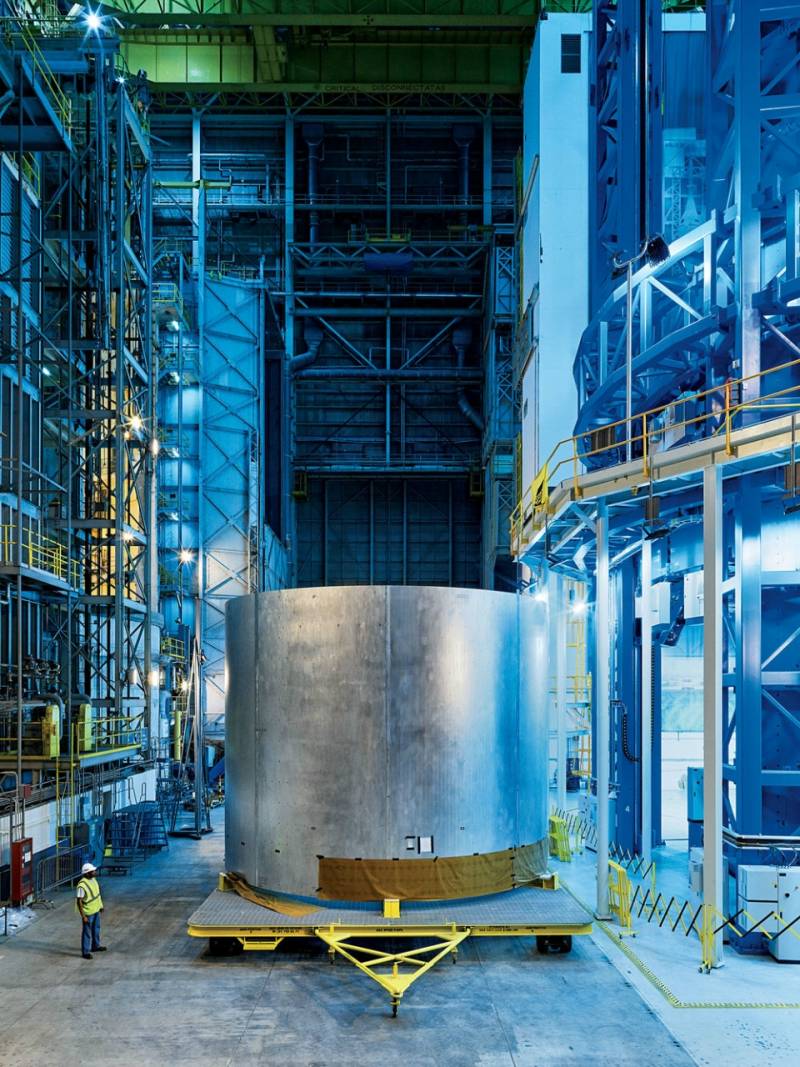 What are the opponents of the program as counterarguments? The most important thing is the presence of automatic probes that perfectly cope with their unmanned research missions. Why shit such a machine of SLS, if everything is already invented in advance, and if not invented, then it can be implemented with much less investment? Pessimists have calculated that the approximate cost of the launch alone, taking into account all investments, can reach half a billion dollars! Of course, if the SLS bullet more than once a year, the price tag will fall, but in the plans, at best, annual single launches. And the picture with the exploration of Mars looks even more colorful - the current money is definitely not enough, and the approximate cost of delivering astronauts to the Red Planet gets to 1 trillion. dollars!

The idea of ​​“all-powerful private traders” of the Mask type with its SpaceX or Blue Origin, capable of more efficiently and cheaper than state-owned companies to launch anything into space, has become very popular. But this is a myth. Aerospace giants Lockheed Martin and Boeing did not enter into a serious business with the state yesterday and do not just swallow billions of budget money. It is precisely the correspondence to the high standards of reliability and safety of NASA that became the “black hole” into which taxpayer dollars go. Private traders, with all due respect, do not have parts of that technological “background” that allows a person to even launch into near space.

What is the positive side of the American public? First, many consider the scientific value of manned missions to Mars much higher than the work of soulless automata. The real meaning of traveling to other planets is to find a new habitat for humans. Therefore, once we still have to change to space heavyweights, so why not do it with SLS? Alternatively, you can build a station for assembling ships to Mars in low-Earth orbit, which will reduce dependence on heavy missiles. But, according to William Gestenmayer, the total mass of the vehicle for delivering astronauts to the Red Planet could exceed 500-600 tons. This raises questions for Falcon Heavy and New Glenn-type rockets, which require 10-12 units against 4 SLS. The “miniature” Delta IV Heavy will generally be able to do this job for 20-28 launches. As long as commercial space will still revolve around purely commercial projects, they are unlikely to be allowed into large programs. And the idea of ​​assembly in orbit is not so perfect. Gestenmayer says in this connection: “For the installation of the ISS, we used“ shuttles ”, and the whole process took several decades. But the biggest drawback of assembly in orbit is the accumulation in a single place of a large number of objects - living quarters, interplanetary ships, fuel storages ... To carry out the assembly work, a huge number of connections will have to be made. It is inevitable that some nodes will not function properly, and it is unlikely that they can be repaired in place. The complexity and risk of operations grows progressively. ” 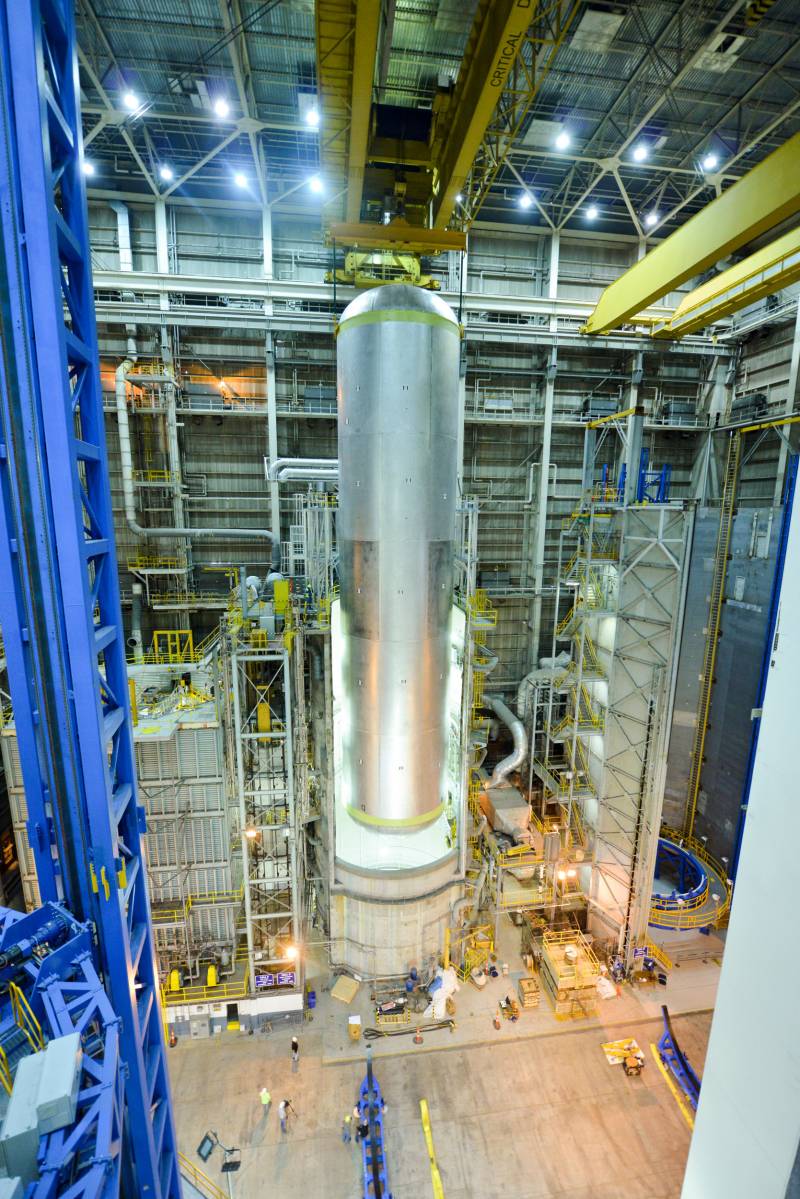 Tank for hydrogen in full beauty.

“SLS will reduce the flight time to the Jupiter satellite of Europe from six to two and a half years,” said Scott Hubbard, director of the Commercial Programs Innovation Center at Stanford University. “It will be a good help for other, yet impracticable, scientific expeditions.” Indeed, launching an SLS automatic station to explore Europe with the help of SLS is the most viable mission of the American heavyweight. It has enough power to deliver the satellite only at the expense of its own energy, without being distracted by gravitational maneuvers near large objects. And it is very much save time missions.

But it is obvious that the most significant impetus to real work on the SLS will be similar projects in Russia and China, which are so far only in vague plans.

We are in Yandex Zen
SLS Heavyweight. American astronauts rush to Mars. Part of 2
Attempt # XXUMX. American rocket LEGO
37 comments
Information
Dear reader, to leave comments on the publication, you must to register.