October 30 2018
43
Quite a lot lately News, one way or another connected with Russia, comes from such an exotic place as the Central African Republic (CAR). Here is the death of Russian journalists who went (with Khodorkovsky’s money) to investigate the activities of Russian private military companies in the Central African Republic, and the accusations that Moscow is supplying weapons government in Bangui, the capital of the republic. And recently, the media actively discussed the stuffing, according to which the Islamist rebels issued an ultimatum to the government, where they demanded, among other things, to withdraw all Russian military from the country.


And although the official representative of the Foreign Ministry, Maria Zakharova, has already refuted this information, it still seems to be a feeling that it is not without purpose. So, we should have a little closer acquaintance with the place on the map, for which someone is so actively fighting: whether the Kremlin, or the oligarchs connected with it, or some other terrible “Russians”. 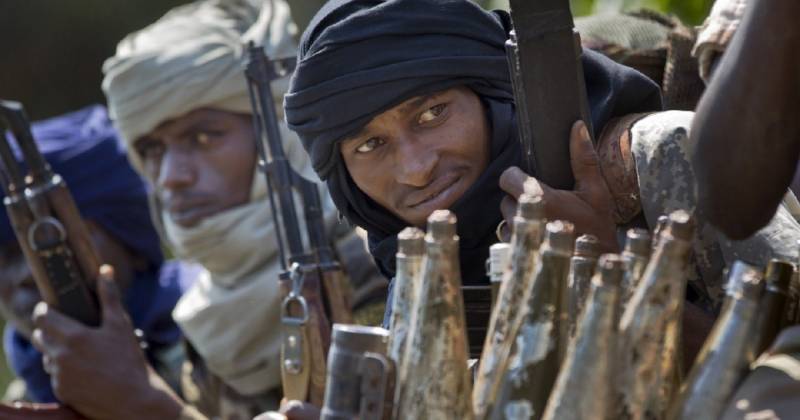 The Central African Republic is, surprisingly, located in the heart of Africa. From its borders it is quite convenient to get immediately to the northern, and to the eastern, and to the west coast of the African continent. And to the west coast, where Nigeria is rich in oil, a modern strike aircraft like the Su-34 will “reach” with a full bomb load. Within the combat radius of such a machine is the coast of the Red Sea, which is of great importance in terms of providing logistics for the main hydrocarbon “pantry” of the planet, the Persian Gulf.

True, the CAR itself has no access to the seas. Partly because of this, the industry in the country is in its infancy. Even in spite of solid reserves of diamonds, uranium and some other minerals, agriculture and forest industry (often appearing as primitive hunting and gathering from anthropology textbooks) brings the main income to the republic. This is probably partly why the Central African Republic is one of the poorest countries in the world. And this is not just sensations or comparisons of travelers, it is quite an official UN assessment in recent years.

The CAR appears to be a small state if approached with African standards. But it, nevertheless, 42-I in the world on the area the country. In Europe, she would be somewhere at the level of Poland or Germany. At the same time, surprisingly, it still does not suffer from overpopulation typical for Africa - the population is about five million people, and the density is approximately at the level of 6 people per square kilometer. It is also worth noting that this is not the driest state in Africa, and the country could well feed its population with all traditional foods.

However, food is imported by the CARs. And the reason for this, in addition to technical backwardness, was the civil war, which, now fading, now breaking out again, has been going on for the second decade.

As is often the case, the civil war in the Central African Republic has unfolded due to religious controversy. About 80 percent of the population of the republic are Christians (mostly Protestant - Baptists and Lutherans). But about 15% of Muslims who are strongly influenced by the Islamic countries of the north and northeast of Africa, including Sudan and Chad, and the Islamists of Somalia and Libya also live in the country. And one day a civil war broke out between Muslims and Christians, which has not stopped yet.

Without delving into the causes of the conflict, let's just state the main thing: the state we are interested in is by no means a simple goal for anyone's geopolitical aspirations. It is not at all like a ripe fruit, ready to fall into the hands of any large geopolitical player, as we sometimes try to imagine. Probably, there is some sense in the struggle for influence in this country, but so far neither the outcome of this struggle nor the estimated value of a possible acquisition is completely unclear.

Actually, right now our conversation has come to the most interesting and important point, namely: should Moscow “invest” in a similar project, or is it not necessary to rush it? The question is not idle, because we all understand perfectly well - such a geopolitical “projection of force” will certainly cost us billions of dollars, and there is much to spend on them within the country.

Probably, we need to get rid of the confidence that in the CAR we can count on the implementation of some simple force scenario. The fact is that there can only be one simple force scenario: take the side of the Christian majority, force Muslims to pacify and develop relations with the government that is grateful for our help (we will hope so). The variant is rather simple, obvious, easily realized, but there is one “but”: if we realize something similar, then there will be nothing left of our support in the Islamic world. And not only American satellites like Saudi Arabia will turn away from us, but also traditionally friendly Egypt. And with it, all influence in the north of Africa will be lost.

That is, this option is counterproductive by definition, and it offers us more minuses than advantages.

You also need to understand that the region of Central Africa is traditionally under the strong influence of the French, the former local colonialists. The official language of almost all of North Africa is French (often not the only, but “one of”, along with some local ones), and local elites not only traditionally face Paris, but are also quite tightly tied to French intelligence.

So, even in the event of a military victory supported by Russian political forces, we are far from being guaranteed the role of an “elder brother” and manager of local resources. Rather, we can expect the betrayal of the Aborigines, and in the end we will get a double blow - and we will disagree with the traditional allies, and we will be left with nothing.

Of course, you need to understand that the ocean is unlikely to calmly look at Russia's efforts to gain a foothold in Central Africa. And Washington will at least help Paris ...

The opposite variant looks doubtful: to get involved in the conflict on the side of the Muslims. Alas, national conflicts in Africa are resolved very specifically, and in the event of a final victory of the Muslims, the case is likely to end with a massacre and millions of refugees. Even now, experts from the UN and international humanitarian organizations are showing signs of genocide in the CARs. And it is unlikely that we really need to be blamed on Russia for the massacre, comparable to the genocide of the Tutsi ethnic group in Rwanda.

That is, it turns out that the Kremlin simply does not have simple and clear options. So, we need to calm down a bit and stop responding too actively to articles in the media, where Russian PMCs are already dividing almost the whole of Central Africa.

Of course, there are enough intelligent people in the Kremlin and the Russian Foreign Ministry who are well aware of the consequences of ill-considered steps in this region. Therefore, let us assume that we should not expect any sharp movements in the foreseeable future either from the political leadership of the country or from the army.

No, no matter how much we want the opposite, in the coming years we should not expect our military air bases to appear in Central Africa. Also, we will not see the CARs in the BRICS and CSTO. Yes it is, in general, and not necessary.

In this case, the activity of Russian PMCs does not anticipate any serious interference by the RF Armed Forces, but is completely self-sufficient. And no matter how much the ideas about Russian power stretching to other continents warm us, the case is most likely limited to the protection of commercial interests.

Another thing is that commercial interests associated with the development of uranium and other minerals may be quite obvious continuation of the interests of the state. With all the ensuing consequences, such as support for the special services and the political patronage of the Kremlin.

In the end, the Americans act in much the same way. And they have something to learn in this matter ...