November 2, 2018
19
German assault units from the very beginning of acquisition, armament and the specifics of combat use became the elite of the army. Their appearance by the end of the first year of the war was caused by the rapid onset (by the end of 1914) of positional hostilities on the Western Front, and, accordingly, the search for ways out of the positional impasse.


Most of the army innovations of the Germans of the second half of the war were aimed at increasing the combat capability of the units with the greatest possible savings in human resources. On the one hand, they tried to solve this problem by strengthening the troops with technical resources, and on the other, by creating special units, including assault units. The task of attack aircraft is to break the neutral zone first, break into the 1 line of the enemy’s trenches and clear it up during the hand-to-hand combat, make passages for their infantry in the enemy’s obstacles, etc. The British document, describing the purpose of the assault detachments, emphasized that they serve especially for difficult tasks of an offensive nature - and they are brought into action only where the hope of success of a conventional infantry attack is very small [Tactical techniques of the German army from the experience of 1916 fighting in the Somme. Comp. intelligence Dep. brit Gener. PC. in January 1917 Translation of intelligence. Dep. headquarters of the Southwestern Front. 1917. C. 31].

And in the course of hostilities, assault units became a striking force, equipped with various weapons and staffed with professionals, capable of solving a wide range of combat missions - up to engineering inclusive. Immediately make a reservation that, speaking of assault units, we mean not only the battalions and companies, but mainly others, but also other units, although they did not have the term "assault" in the name, but according to the functions they perform - the implementation or maintenance of a breakthrough of the positional front) close to them. Among the latter, flamethrowing units (first of all, the 3 th Guards Pioneer Battalion, then the regiment, although there were also flamethrowing units as part of assault battalions), chasseurs battalions (each assigned corps and special tasks were solved, some were reorganized into assault battalions) and mountain battalions.

The emergence of assault units, structure, weapons, manning and training

With the outbreak of hostilities on the basis of reconnaissance teams, assault teams formed in a number of the latter at the headquarters of the regiments - they had to prepare the offensive of their regiments, destroying wire barriers and similar obstacles. The number of such a team - an average 12 people [German army. Essay on the development of the land forces of Germany during the war and the combat strength of 1 on April 1917 with corrections on 15 of June 1917. Ed. The headquarters of the Commander-in-Chief of the armies of the Western Front. B. m. 1917. C. 32]. Armament - rifles and grenades. 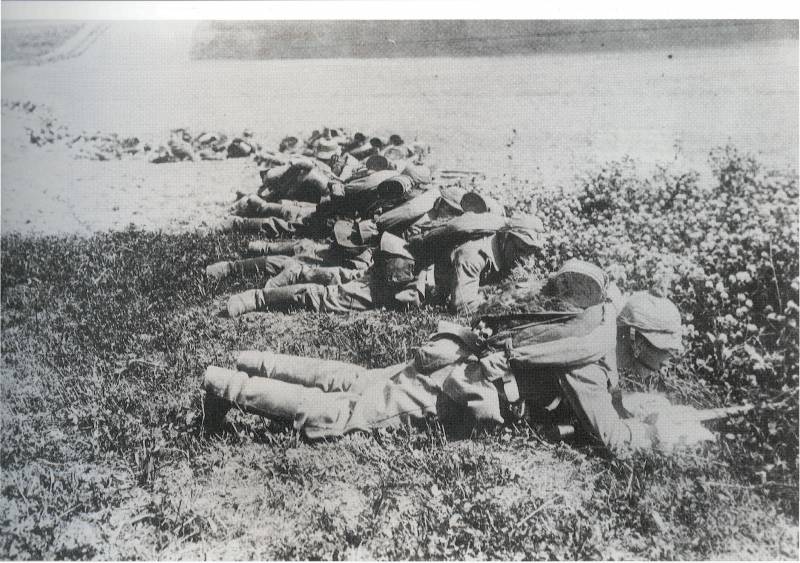 The immediate predecessor of the stormtroopers were "trench sweepers" - groups of sweepers appeared in the infantry units. The task is to “clean up” the captured positions of the enemy, while the main forces of the advancing infantry moved forward. They were armed and equipped accordingly: grenades, portable shields and carbines. 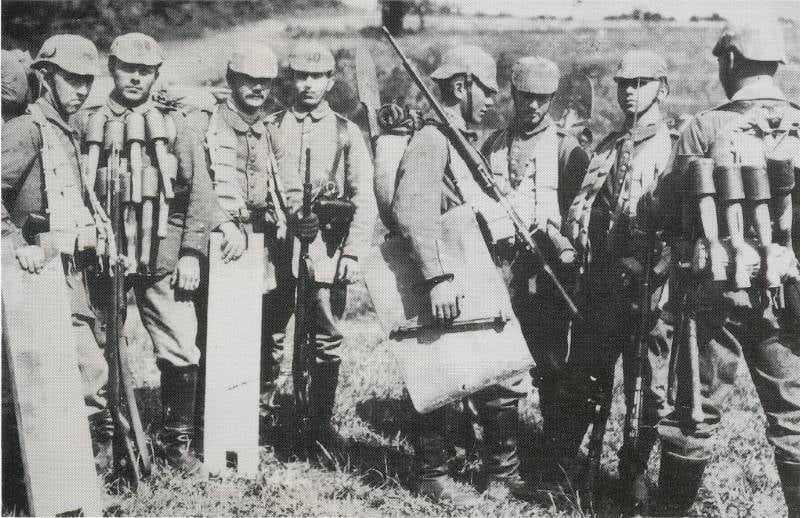 The fighters of the early assault units of the German army are the “trench sweepers”, the predecessors of the actual assault units, 1915 g. You can clearly see the Pichelhaube army helmets without a bump, shields and bundles of hand grenades.

Officially, the first assault unit was formed on the basis of an order from the High Command of 02. 03. 1915. The command of the 8 Army Corps was ordered to form a unit for testing new weapons and tactics - in the search for measures to overcome the positional impasse. Part of it was completed by sappers, fighters familiar with the principles of siege warfare and skilled in handling hand grenades. Because the main problem for the attacking infantry was machine guns, the Germans found a worthy means of fighting this weapon in the Krupp 37-mm assault gun, which was easy enough to be used in infantry combat formations. To test the new weapons and formed the first assault battalion (first 2 company), headed by a former officer of the 18 th engineer battalion major Kaslov. The battalion received a platoon of 37-mm guns, a machine-gun company (6 machineguns), a mortar command (4 mortar) and a team of flamethrower. In addition to the new gun, the battalion received other new items - a helmet and body armor. After the 3-month training, part was sent to the front, where the units were distributed between the infantry battalions of the 1 line. Combat experience has proven that the gun is too vulnerable and clumsy. During several battles, the battalion lost up to 30% of its composition, primarily due to the lack of appropriate tactics. 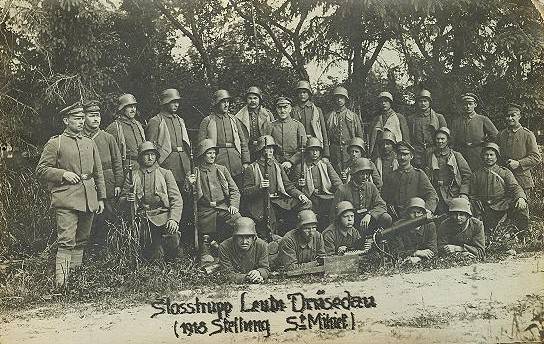 In August, 1915, the battalion commander, was the former Guards marksman, Captain Pop. The new commander introduced a special tactic used to capture the enemy's trenches, and Russian trophy three-inches with shortened trunks took the place of the 37-mm guns. Uniforms and equipment were changed. And Rohr himself personally invented many of the devices used by attackers in battle. In the fall of 1915, the battalion successfully operated in the Vosges, and in early February 1916 was transferred to Verdun. 01. 04. The 1916 Battalion was finally becoming a battalion in numbers, and in May of the same year, the command ordered all the armies of the Western Front to assign officers and 2 non-commissioned officers to the assault battalion to train the new methods of combat. The 4 Assault Battalion became a school of new methods of warfare.

23. 10. 1916, the first Quartermaster-General E. Ludendorff, ordered all the armies of the Western Front to form a assault battalion. Some battalions were formed on the basis of infantry and chasseurs units, others - sapper. And by the beginning of December the 1916 16 assault battalions existed.

Many of them were consolidated parts of an assault character, created earlier in the order of improvisation and operating as part of divisions. In the same year, regular divisional 3-platoon assault companies appeared, which included an officer and 120 lower ranks. One assault platoon was given to each regiment. And by November 1916 more than 30 German divisions had assault units. Assault detachments were also formed by several corps, landwehr and naval divisions. The tradition of organizational and tactical independence, instilled in the German army, established that a number of organizational issues were within the competence of corps, division, and regiment commanders. And the process of forming assault units and parts was parallel - from below and above. 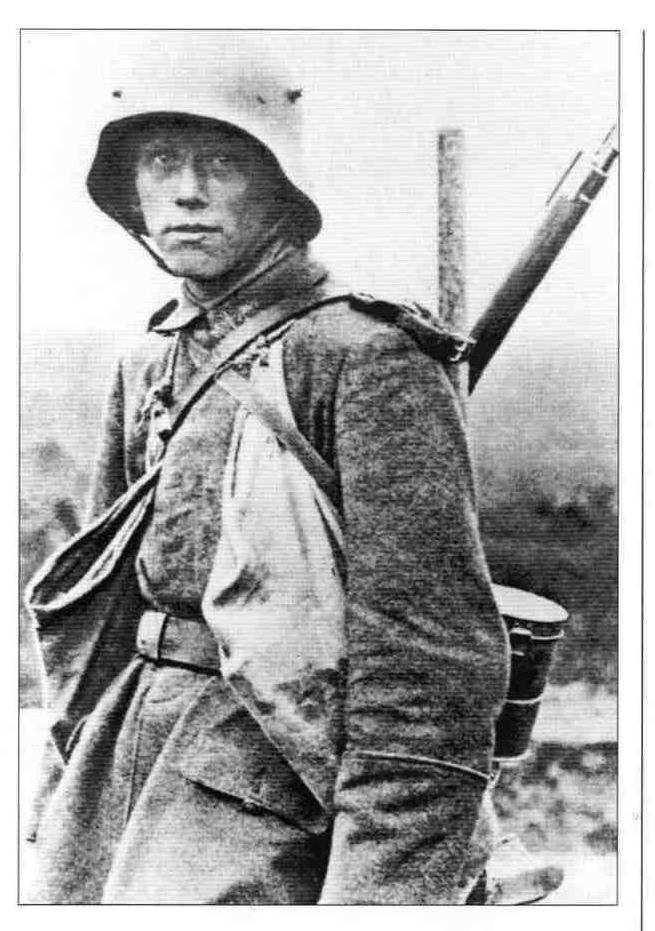 The formation of assault groups from below has been going actively since the summer of 1915.

Thus, already in the middle of 1915, shock units appeared in a number of German infantry regiments - from the squadron to the company (the names were very diverse). The assault battalion of Rohr became the most famous and the first part of the permanent composition. The simultaneous appearance of assault groups in a number of divisions illustrated the effectiveness of the German military system, which encouraged the commanding initiative. 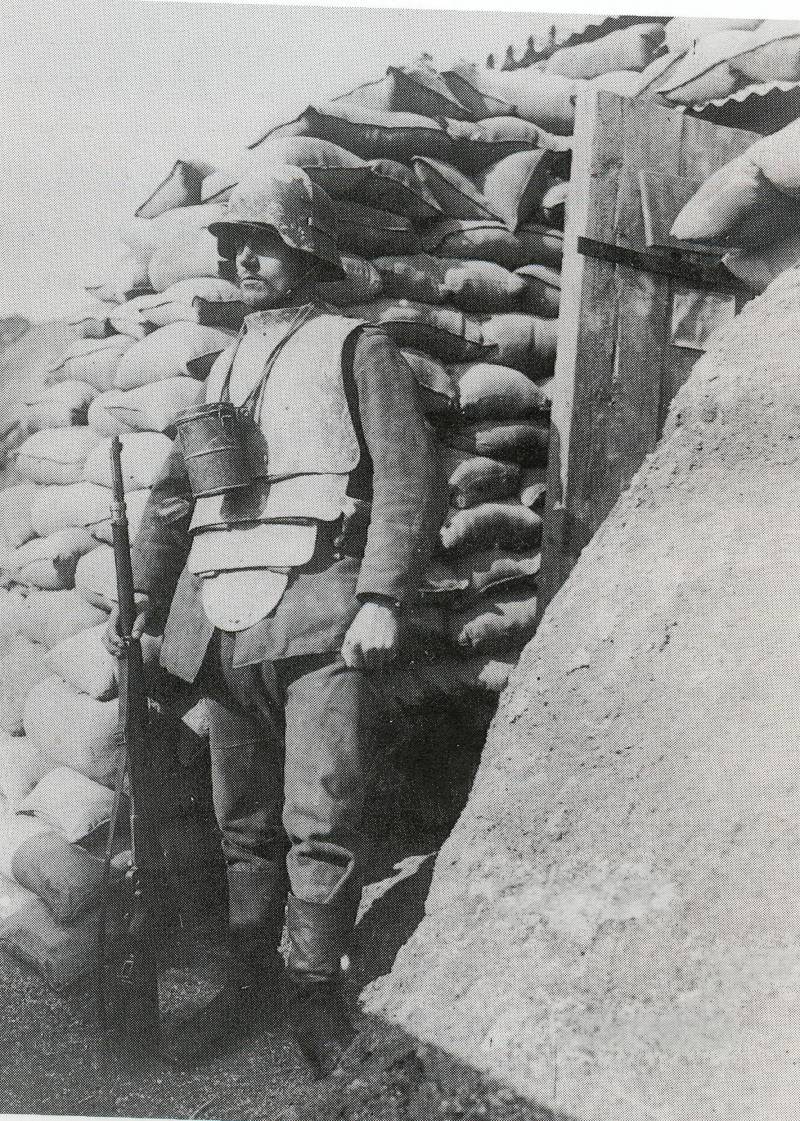 fighter assault battalion Rohr in equipment, including a steel helmet and body armor. 1915

Thus, there were the following assault units and units:

A) corps and army assault battalions;

B) divisional assault companies. They showed themselves for the first time near Verdun. Some of the mouths included an 4 platoon. The composition of the company: 4 officer, 20 non-commissioned officers and up to 225 privates, 2 machine gun, 2-3 light mortar and 3 flamethrower. Submitting directly to the division commander, the company was attached to infantry units. [German army. C. 76].

C) assault platoons of infantry companies. Such a platoon was formed for combat, requiring serious strain, or with prolonged resistance of the enemy. The unit is of a temporary nature (initially 10 of the best soldiers of the company, later 15 - 25). In the first case, the platoon came at the disposal of the company commander, and in the second case, the platoon was formed from specialists (selected shooters, grenadiers, etc.) [On the assault units of the German and Austro-Hungarian armies. According to September 1917. Comp. Taneyev, bg, b. m., The current army, the printing house of the headquarters of the 9-th army. C. 3]. Fighters of assault troops called "grenadiers." 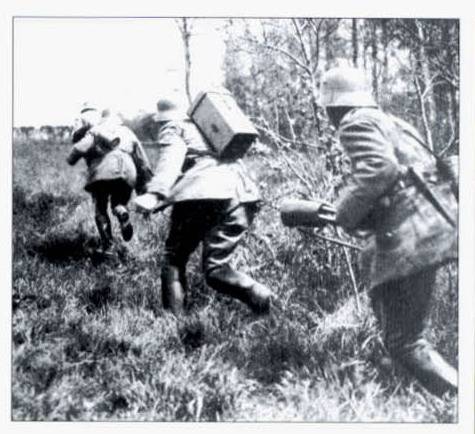 group of attack aircraft in battle

The High Command did not initially plan to convert assault units into regular units of units and formations. Thus, the order for the 7 Army recorded that the assault units were temporary units, and the people included in them were considered temporarily seconded from their units. [Ibid. C. 1.]. Before them was the task of breaking through the front of the enemy. That is, assault detachments were understood exclusively as parts of wartime, staffed exclusively by soldiers of the active army. As long as the assault troops had neither storiesnor even its instrument color. 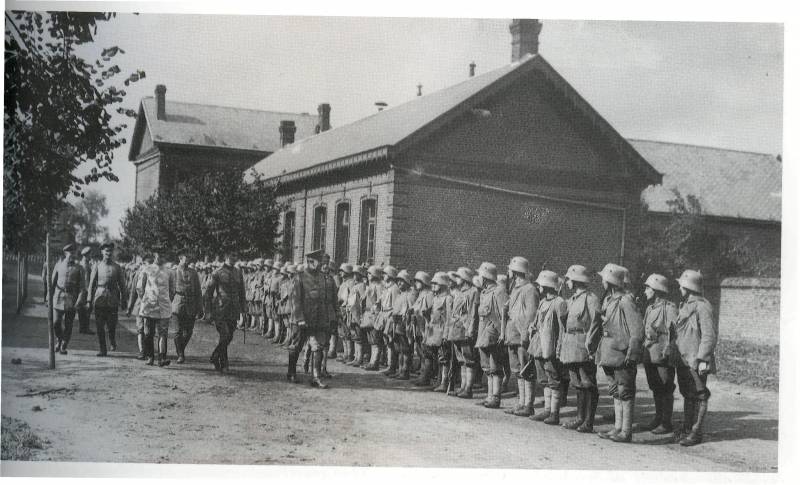 review of the assault unit before leaving for the front line 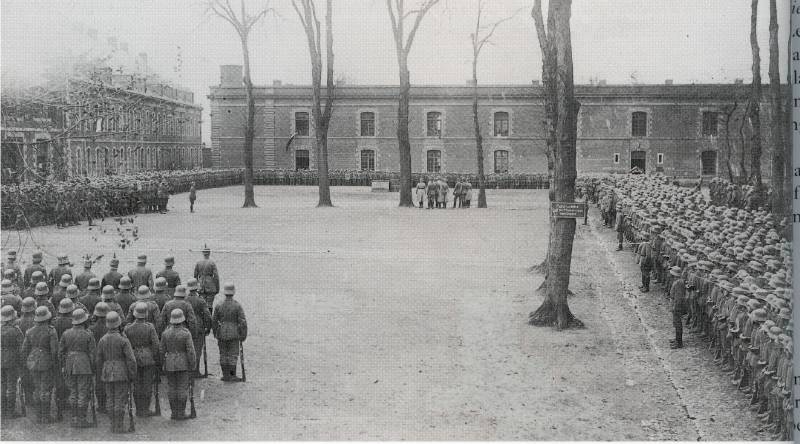 Kronprinz inspects assault battalion before the general offensive of 1918. 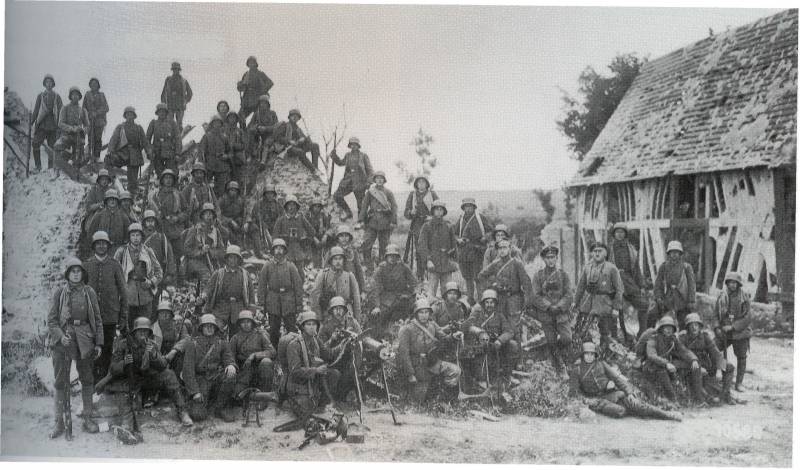 Often, assault battalions in the form of battle groups (in terms of the number of equal companies) were transferred between armies and fronts to reinforce infantry. So, 21. 03. 1918, in the first day of the operation, "Michael» 3-th Chasseurs assault battalion was divided into 4 battle groups: one (company, platoon and flamethrower infantry gun 2) gave 79-th reserve division, the other (infantry and machine-gun company, flamethrower platoon 2 infantry guns and 2 mortar) gave the 50-th reserve division, the third (the same composition as the second) gave the 18-th division, while the fourth (infantry company and 4 mortar) remained in the 2-army reserve.