October 29 2018
15
Foreign Ministry spokesman Andrei Belousov told the UNGA that "the United States is preparing a war, leaving the INF Treaty." Russia, accordingly, is "preparing for war." The US rationale is standard, which goes back to Secretary of State Colin Powell’s test tube, allegedly Russia “has been violating the INF Treaty for five years already”, the Americans don’t bother themselves with the evidence, as always. 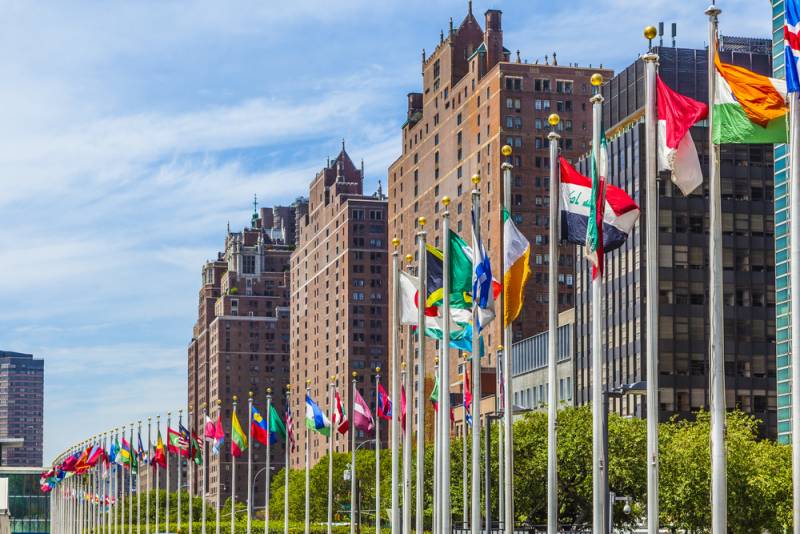 In general, these are threatening statements, some experts even talk about the approaching new Caribbean crisis, and there are formal grounds for this: the Caribbean crisis in 1962 was provoked by medium-range missiles. However, not everything is so bad, because “our agent” Donald Trump is sitting in the White House of Washington! He makes us a good face on a bad game, and we understand what kind of game it is.

The beginnings of passion for medium- and short-range missiles represent, in general, an attempt at great blackmail: the US threatens with the deployment of medium-range missiles, so to speak, with a new step in the big game. And what does the blackmailer Donald Trump want us to say?

Note that at the same time with the theater, literally at the ramp of the aircraft, a statement about the US leaving the INF Treaty, Trump sends his assistant and the inveterate “hawk” John Bolton to Moscow for negotiations, which kind of guarantees him from Vladimir Putin’s polite charm and conspiracy charges. Despite Trump's belligerent statement, Bolton is received very well in Moscow, everyone is smiling, Putin himself accepts him, jokes about olives on the American coat of arms, which are no longer there ...

And Bolton is very pleased, he offered Putin to pay a visit to the USA in 2019, after a rain on Thursday. Moscow didn’t say a word about it, something will happen in the 2019 year, but Bolton could not resist, he told the world: Trump wants top-level talks with Putin.

The goal of our blackmailer Trump is to “sell” virtual medium-range missiles to us, which still need to be produced and placed at an average distance from Russia for new strategic weapons to Russia, famous cartoon missiles. Vladimir Putin showed them on video not too long ago, 1 in March of this year during his speech at the Manege. Exchange virtual rockets for cartoons ... In general, a great business can happen on both sides.

For some reason, they say little about this self-evident goal of our American blackmailer, but this explains the US withdrawal from the INF Treaty. No revision of the INF Treaty will allow Washington to reach the newest weapons of Russia. For this, we need new negotiations on the limitation of strategic weapons, which is called “from scratch”, a completely different SALT agreement that could be extended to new strategic weapons of Russia.

And after all Russia will go on these negotiations, therefore Bolton well met in Moscow. Recall that Vladimir Putin, in his March 2 speech, demanded that the United States negotiate strategic arms limitation. “They don’t want to talk with us ...” And now, a little more than half a year has passed, and Trump really wants to talk. But “from scratch,” without a treaty on the INF Treaty, whose fate will apparently be shared by START / OCW-3. Videos about the newest weapons of Russia were an argument to induce the American side to these negotiations. Cartoon these weapons or not, but they have already worked.

Everyone understands that the Americans cannot “lose face” by agreeing to negotiations on the initiative of Putin, they must submit it from a position of strength, therefore, although Bolton flew to Moscow to cancel the INF Treaty, everyone smiles.

Already on November 11, a short meeting between Putin and Trump may take place in Paris to relieve tensions, although obviously unsuccessful. Trump will probably promise a lot of things, but Putin’s Moscow is unlikely to believe in Trump’s tears, especially since Trump himself is under the blow of the neocon democrats, and nobody knows what will happen to him and his policy tomorrow. Is that Kurt Walker, this reincarnation of John McCain?

Our well-known analyst Sergei Karaganov in Dmitry Kulikov’s “Right to Know!” Program raised an interesting question: “Does Russia really need a new SALT agreement?” Russia benefits from “positive ambivalence” when the US won’t know how much it has in its pocket of hypersound and nuclear rocket engines. On the other hand, the agreements written with the pen with America cost nothing, as evidenced by too many such agreements, starting with the ABM Treaty.

To go on negotiations - it does not mean yet to agree, to promise does not yet mean to marry. Negotiations can be conducted for the sake of many goals, including for the sake of the fact of the negotiations themselves, but about any means of mutual control and military communications after the abolition of the obsolete PRSMD is really necessary to agree. Perhaps something else that the parties will try not to do in relation to each other.