Despite the rather optimistic reports of both representatives of the Russian Ministry of Defense and the American generals from the Pentagon, a number of existing tendencies make it possible to make a rather serious prediction. First of all, it should be noted that successful military operations of both coalitions (led by Russia and the United States) in Syria and Iraq did not eliminate the global threat posed by the Islamic State of Iraq and Syria group (hereinafter IG, prohibited in the Russian Federation). ).

Officially, it is reported that the same United States completed an active phase of large-scale hostilities in Iraq in April 2018, after the end of the sweep from the jihadists of Anbar province. From that moment on, Washington declared that it was changing its strategy of participating in the fight against IS on the territory of Iraq and Syria, almost completely placing the brunt of the fight against these ultraradical caliphists on the shoulders of the Iraqi armed forces and the Kurdish self-defense units.

However, it takes only six months, and it turns out that the mission to finish off the “igilovtsevs” entrusted to the local security forces turned out to be completely beyond American creatures. As a result, according to the American intelligence, the radical caliphists again managed to restore their numbers to the level of 25-30 of thousands of militants dispersed in certain regions of Iraq and Syria. Moreover, “IG” even now again represents a greater threat than the Iraqi Al-Qaeda (banned in the Russian Federation) at the peak of its power in 2006-2008. 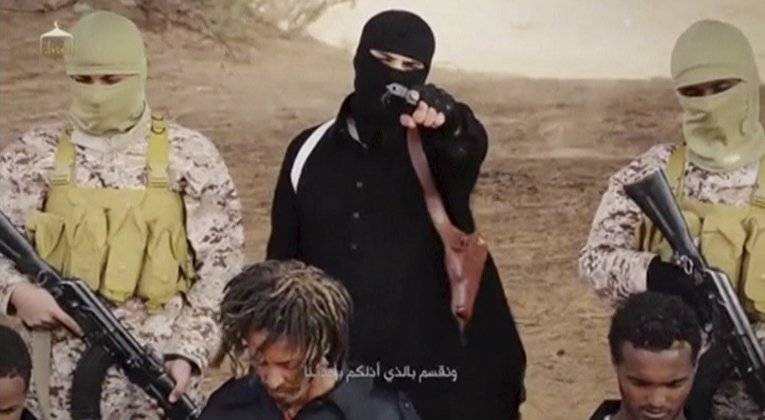 Militants "IG" before the execution of captured hostages

Apparently, in the current period, IG is actively restoring the number of its ranks (heavily thinned out in recent months) and gradually begins small attempts at local operations. Moreover, according to some experts, supporters of the neo-caliphate have now changed their strategy and are conducting a much more dangerous campaign to restore the strengthened areas of long-term support, actively gather financial resources, and also restore the almost destroyed command-coordination network of their cells in Iraq and Syria.

In fact, it seems that in some, not yet controlled "IG" and pacified territories, a series of military insurrections may occur in the coming months, as a result of which the "local security forces" formed from representatives of various radical groups may go over to the side of neo-Caliphists, morally not very stable government units, deprived of assistance from the forces of Russia and the United States, will simply be ousted to areas with sustained support from the population.

As already noted, a number of facts testify to the feverish attempts of ultra-radical Caliphists to find new sources of income and to restore command control over the scattered enclaves remaining under their authority.

According to some estimates, the leaders of the Islamic State managed to withdraw about 400 million dollars from the territory of Iraq and Syria and substantially reinvest them in legal business options or invest in real estate, mainly in Central Asia.

This estimate does not include an exactly unknown and therefore difficult to calculate large amount of money received by Caliphists from such types of criminal activity as extortion, smuggling, robbery, slave trade, etc.

Let us demonstrate this with a few facts. For example, even the Syrian Islamist group "Hayat at-Tahrir ash-Sham" (banned in the Russian Federation) accused "igilovtsev", located in the northern regions of Syria, in the capture of many hostages not only from among the Kurds, the Alawites , christians, etc. ethnic and religious minorities, but also from among the “completely orthodox Sunnis,” the release of each of which cost tens of thousands of dollars. 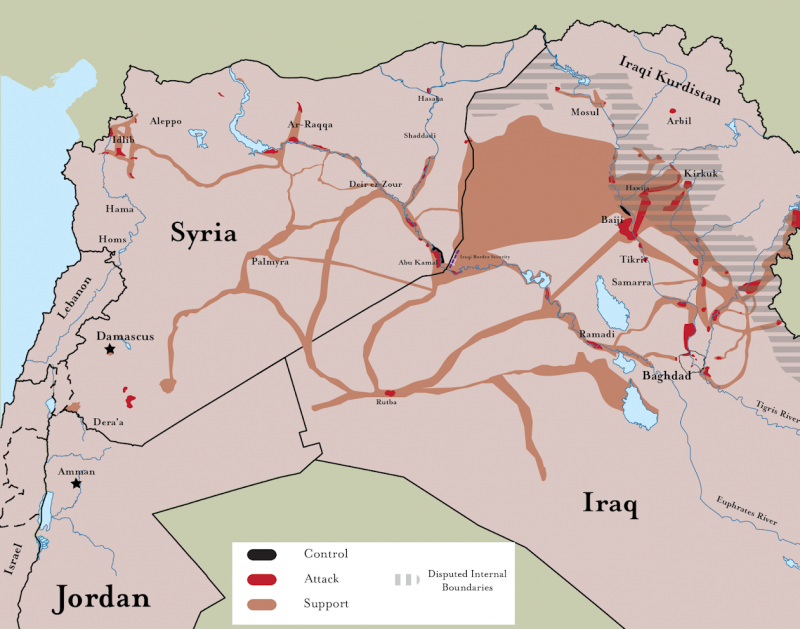 Also during 2018, the international coalition forces led by the United States, according to their statements, carried out repeated interceptions of batches of drugs belonging to IG. It was planned to sell the parties in the liberated from the Caliphate regions of Syria and Iraq, as well as export them to neighboring states.

In addition, there are facts of revealing a multitude of firms whose owners, who were not active jihadists themselves, were associated with IG or even opened their own firms and received working capital directly from neo-caliphists. Among those types of businesses you can point to car repair shops, car dealerships (mostly used ones), electrical goods and home appliances stores (especially used ones), pharmacies, chemical fertilizer firms and underground currency exchanges.

There is even evidence that in the past few months, small groups of militants from among the supporters of the neo-caliphate carried out a number of very daring raids on medical centers, as a result of which a significant number of medicines and narcotic drugs were stolen (mainly in the areas controlled by Kurdish units ). Stolen medicines can be used by jihadists both for sale in order to receive funds and to treat their own fighters in upcoming operations.

Speaking about the possible restoration of the “IG”, one cannot but say about their attempts to regain control over the remnants of the separate divisions of the “caliphate army” and to increase their influence on the population of the still controlled areas. The successes, on the one hand, of the coalition headed by Russia, and on the other hand, of the coalition led by the United States, resulted in the remnants of a rather significant number of units of ultraradical neo-caliphists ceasing their open armed struggle and moving to an underground position, as if returning to peaceful life.

However, one should not think that as a result of this, only approximately 10-12 thousands of militants remain under the control of the central leadership of the IG. It is known that everywhere in the territories of Iraq and Syria, “igilovtsy” strengthen internal interaction, and the supreme leader of this terrorist association, Abu Bakr al-Baghdadi, released another 22 on August 2018, an audio call for his followers to more actively unite and rally the ranks, strengthening internal interaction and coordination between individual enclaves.

In addition, it is known that since March-April of the current year, the neo-caliph leaders changed their strategy, directing the attention of their “field commanders” to forming “sleeping” IG cells in those territories from which jihadists were to retreat under the onslaught of the Western and Western anti-terrorist forces Eastern coalition.

We illustrate this thesis with the following facts. So, even 20 July 2018, the leadership of "IG" announced the formation of two new "wilayets" - one each in Iraq and Syria, which, according to some experts, are operational-level headquarters, responsible for both local combat operations and management and bureaucratic functions. 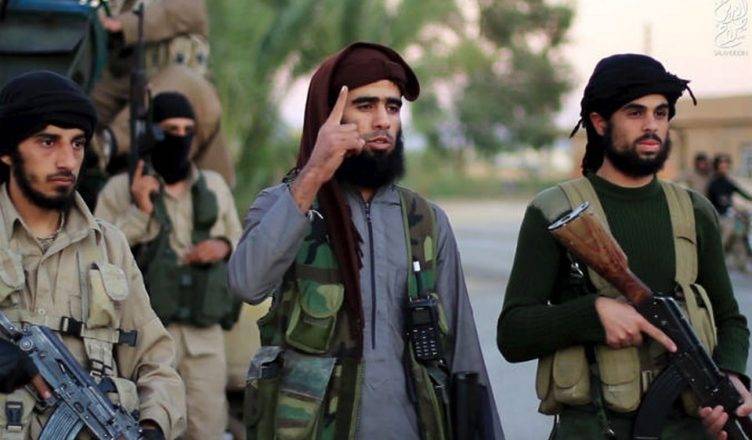 Islamists from the "IG" lead a religious sermon of their views.

Let us clarify that the Islamist quasi-state still retains approximately equal forces in each of the countries under consideration: according to the Pentagon, at the end of August - beginning of September 2018, approximately 12-14 thousand IG militants are operating in Syria, and approximately Iraqi 15- 17 thousands of militants from among the supporters of this organization.

The propaganda and recruiting campaigns conducted by ultraradical caliphists have quite clear features of having a single information center that coordinates the efforts of individual extremist units in this area.

It is worth noting that, despite attempts by the forces of both coalitions operating in Syria and Iraq, to ​​identify and neutralize the command coordinating centers of the igilovtsev until these efforts yielded tangible results, although they clearly slowed down the restoration of the single organizational structure of this terrorist group.

In addition, it is necessary to note the extremely wide network of international cooperation "IG" ("DAISH") with its branches and simply joined "branches" throughout the world. So, only active combat operations are carried out by their supporters in Afghanistan, Pakistan, Nigeria, Somalia, Egypt and the Philippines, not to mention the factor of the presence of small “sleeping” terrorist cells scattered over an even larger number of states.

(The continuation of the analysis of the possibilities of the revival of "IG" in the near future, read in the second part.)