European values ​​of the frigate FREMM

October 27 2018
46
The second largest in the world series of surface warships with a displacement of more than 5 thousand tons. To date, 14 units have entered into service; laid and completed five more. By the beginning of the next decade, their number promises to reach 20. 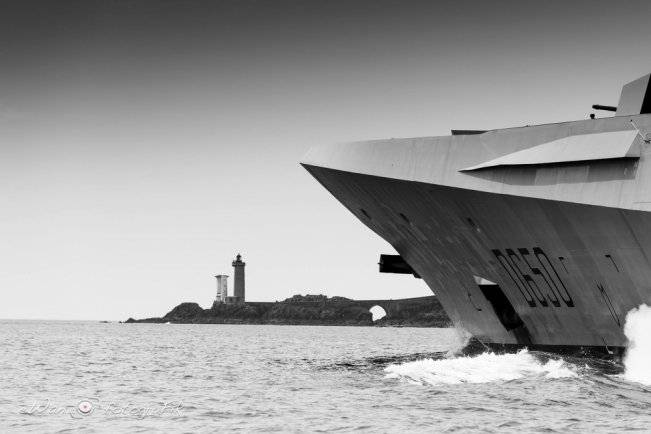 Having managed to be buried and in vain by the efforts of the domestic media, the European military industrial complex turned out to be very much alive. The construction of ships under the FREMM program takes place against the background of a gradual and continuous strengthening of European fleets, which can hardly be explained by a surge of militarism or preparation for a big war. The emergence of projects such as FREMM, just a consequence of a developed economy, in which even the minimum defense costs (within 2% of GDP of these countries) is enough to completely update the composition of their Navy. The observed situation is greatly contributed by the technologies of our time, thanks to which the frigate acquires the value of a ship of 1 rank. His presence can be felt throughout the theater of operations. A couple of decades ago, installing a weapon with similar characteristics required a ship with twice the displacement.

In a number of aspects, FREMM is a step backwards compared to the previous European project CNGF, under which the Horizon frigate 4 was built - in pairs for the French and Italian Navy. Objectively speaking, these are the best ships for solving air defense tasks ever created in stories military fleet. 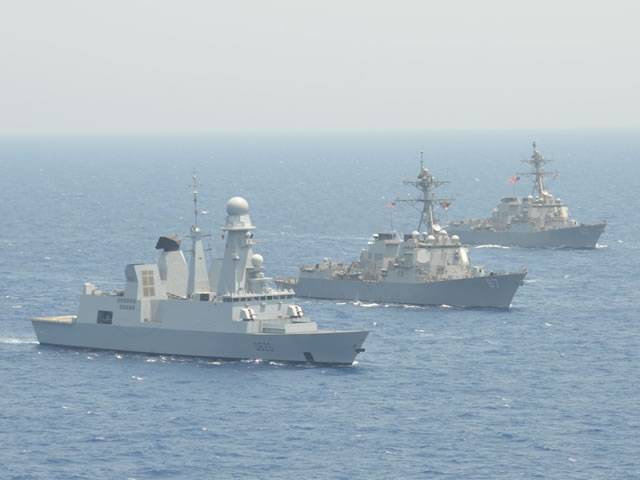 “Horizon” is an example of the capabilities of the European military industrial complex, if they decide to “play muscles” seriously. Excessively powerful and expensive ship for peacetime

The current FREMM is different.

The reduced air defense capabilities and the minimum composition of the strike weapons (half of the frigates do not have it at all) indicate the absence of intentions to conduct full-scale military operations. FREMM (Frégate multi-mission) are patrol ships of the far sea zone, focused on participation in low-intensity conflicts, “police” and humanitarian operations. This conclusion emphasizes the priorities of their design, in which significant volumes of the hull and superstructure are reserved for the placement of rigid hull high-speed boats and helicopters.

A certain role is played by financial constraints, which caused a reduction in ammunition and other design compromises. The variegated composition of the frigate series, which are built in four versions (air defense / air defense / multi-purpose / multi-purpose percussion), is not due to the popular concepts of "modularity", but a more prosaic reason - the desire to keep the cost of units within 600-700 million euros. Each frigate is equipped with only a portion of the available equipment. The choice of means to be installed is determined by its “purpose”.

Constructive underdevelopment and “reserved volumes” are more or less characteristic of most modern ships. However, in the case of FREMM, savings have become a priority for the entire project.

Of course, not missile cruisers and dreadnoughts. But you should not flatter yourself. As noted, modern technologies allow more than it might seem at first glance.

French frigates (a subclass of "Aquitaine") are regularly equipped with the Hercules radar, which has an instrumental detection range of 250 km, with the possibility of tracking to 400 targets. The same multifunctional radar complex controls the anti-aircraft missiles on the cruise trajectory. No additional radar light is required - the FREMM frigates are armed with Aster family missiles with active guidance heads. 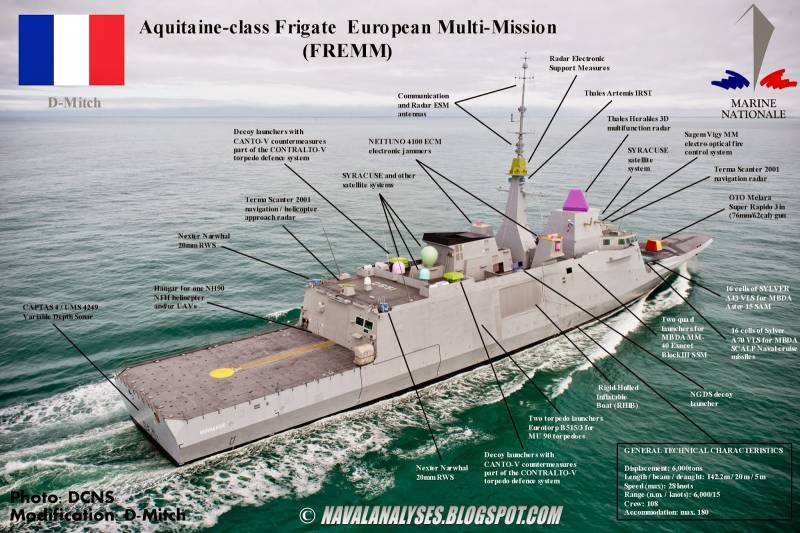 In addition to the main multifunctional RLK, European frigates are equipped with an additional centimeter-range 2D radar for detecting small surface and low-flying targets. The French - "Terma Scanner" high resolution. Italians - “Leonardo SPS-732”, emitting weak pulses in a wide frequency range, “red noise” to make it difficult to detect its operation. Unlike the enemy's RTR facilities, which do not pay attention to signals that are too weak or are mistaken for radio interference, the Leonardo SPS-732 processor gradually accumulates data and, according to the theory of probability, determines the position of the target.

The flight range of the Aster-30 anti-aircraft missiles, according to the data presented, leaves 100 + km. However, six of the eight French frigates (in the "budget" PLO version) can not boast of this opportunity. Their weapons include only Aster-15. Missiles of this type due to the absence of a starting stage and a shortened "dead zone" are ideal for short-range interception. But they have limited range (total km 30).

Among other notable features and “high-tech” new products in the asset of FREMM frigates:

- cruise missiles SCALP-Naval - European analogue of “Calibrov” and “Tomahawks” with a smaller starting mass (1400 kg), stealth technology and a flight range of 1000 km. In reality, SLCMs were installed only on French ships (16 CWR). The Italians confined themselves to reserved space for vertical launchers;

- two sonar - hook and towed, with a low-frequency antenna. Italians are equipped with an additional power to detect mines;

- only on Italian frigates - anti-submarine missile system MILAS, a rather rare phenomenon for European ships;

- the French also did not remain in debt - the Artemis system was included in the standard equipment of the frigates to monitor the situation in the IR range in any visibility conditions and any time of day.

The list of differences in the composition of weapons of French and Italian FREMM can take more than one page, and Latin abbreviations and numbers will cause boredom even among a specialist. This material does not claim to be a technical report. Its goal is to ensure that readers have an opinion about these ambiguous ships.

Strictly speaking, the frigates “Aquitaine” and “Bergamini” are two different projects, using a hull of similar shape and some technical solutions (for example, a SYLVER type CIP). They are related to common features and their tasks. Ideal compatibility for actions as part of a single operational connection.

Each country seeks to support domestic producers. Hence the national flavor in the "stuffing" of each frigate. From anti-ship missiles of its own production (the French - the traditional "Exochet", the Italians - "Automatic") to deck devices for forced landing, mooring and moving helicopters. Unlike the French, who use their own Samahé system, the Italians chose the American TC-ASIST. 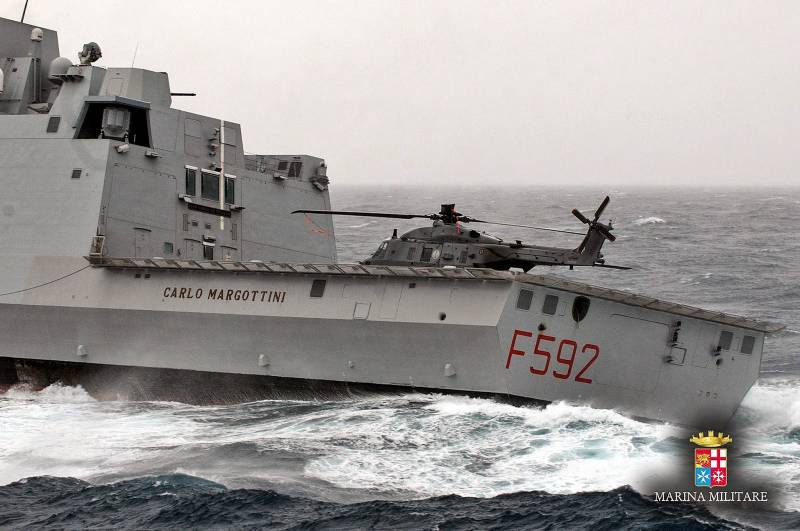 Despite all the fraternization of European nations, surrounded by a network of data exchange on the NATO Link-21 standard, the ships of France and Italy retain their independence in such critical areas as the management process and decision-making. The frigates of each country are equipped with their own sample BIUS. The French system is called SETIS. The Italians - "Athena".

Not to mention such “trifles” as encrypted communication channels. For example, the equipment of the French FREMMs includes communications equipment through the military satellites of the Syracuse series.

There are differences in the power plant. Both subclasses of frigates use a modern combined diesel-electric transmission with the ability to connect a full-speed gas turbine. At the same time, the Italian project implies the possibility of simultaneous operation of propeller electric motors and gas turbine engines operating on both shafts. Due to this, the Italian FREMM have a slight advantage in speed of full speed (30 vs. 27 knots.). Also, either due to the better efficiency of the GEM, or due to the increased fuel supply of the Italians, there is an advantage in the navigation distance by the economic move.

The French MTU diesel engines, the Italians - their own "Izotta-Frascini" were chosen by the French as the power plant of the economical course. An Italian gas turbine Avio LM2500, a licensed copy of General Electric, is installed on all frigates in full swing. In addition, all frigates are equipped with an auxiliary thruster in the bow of the hull.

Based on the “table” characteristics, among the FREMM class ships built so far, the Italian multipurpose version of the “Carlo Bergamini” looks the most attractive. Here and long-range anti-aircraft missiles, and a radar with AFAR, and a pair of 127 and 76 mm caliber artillery systems, and even a hangar designed for two helicopters.

As for the absence of cruise missiles, a dozen and a half of the CRBDs do not solve anything in any conflict. Equivalent - the departure of a pair of tactical links aviation. Much more important is the ability of Bergamini to provide zonal air defense / missile defense of naval formations, and this is precisely the purpose of the ship's existence of 6700 tons. 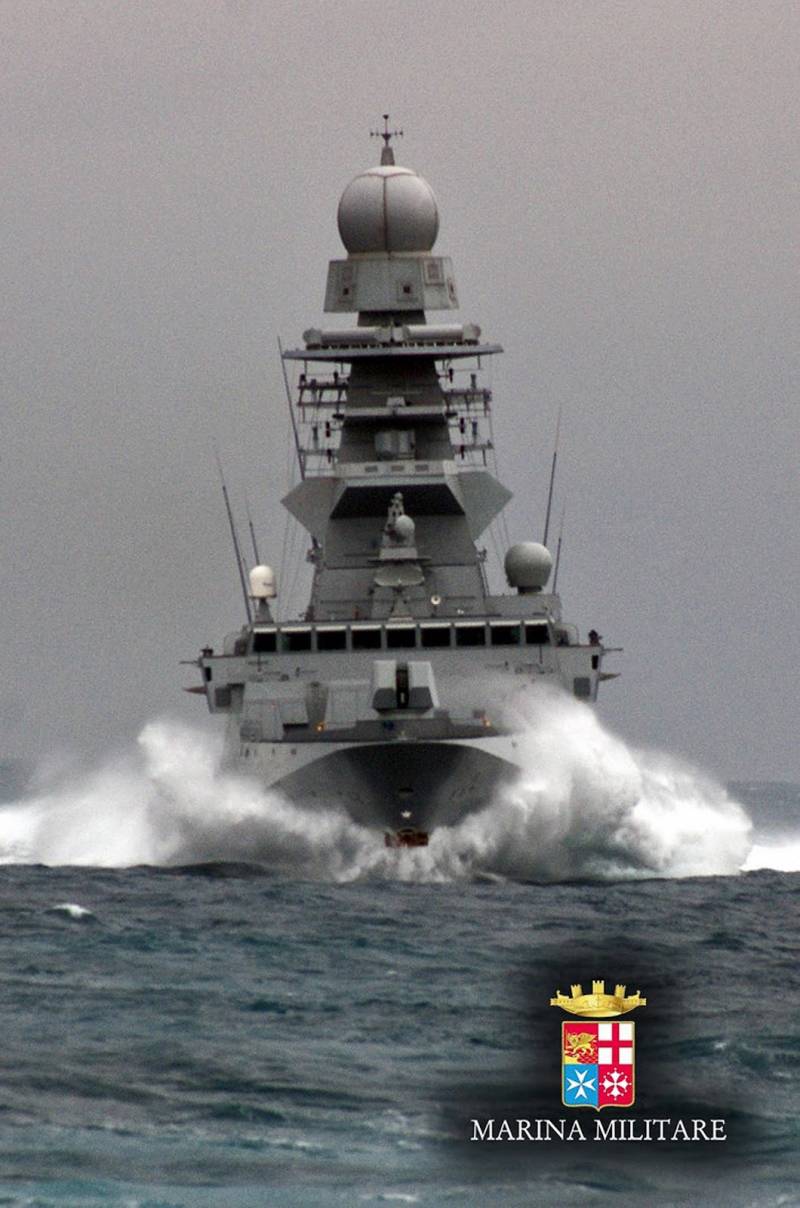 The French also do not sit on their hands. In 2016, the Alsace was laid at the shipyard in Lorient, the differences from which of the base FREMM were so great that it was classified as a new type of FREDA (“air defense frigate”). Among the main differences are the reconfiguration of the nose of the frigate with the installation of 32 missile silos SYLVER in the "tactical" version (instead of 16 "short" mines for self-defense SAM and 16 "long" mines for the Kyrgyz Republic on the base FREMM). As ammunition - any combination of Aster anti-aircraft missiles in order to provide air defense in the near and far zones. To keep the cost of the ship at an acceptable level, the designers had to sacrifice the towed antenna.

In addition to the four base, FREMM has a pair of export versions - “Tahia Misr” for the naval forces of Egypt and “Mohammed VI” for the Moroccan Navy. However, there’s nothing to talk about there: export frigates differ from French ones in dismantled mines of SLCMs. But the customer is satisfied - there even such ships will go for the flagships.

Some interest in the project is shown by the Americans, who consider the FREMM as the basis for their promising FFG (X) frigates. For those who do not know: the United States and Italy are connected by invisible but strong ties in the field of military shipbuilding. For example, a shipyard in Wisconsin, on which ships of the coastal zone LCS are massively built, is part of the Italian “Fincantieri Group” - the one that created FREMM.

Most of all, I would not like to see comments in the form of “the French and Italians are great, seven feet under the keel.” Unlike any news about the update of the American fleet, the news of the increased sea power of Europeans does not cause that stir, the desire of all sorts of curses and accusations of militarism.

Dear Sirs, let's be logical to the end. We are talking about the fleets of NATO countries that continuously commit provocative acts and are involved in creating threats against Russia and our allies. From regular trips to the Black Sea to rocket attacks on the territory of Syria. The existence of the FREMM armada directly contradicts our interests. This is an adversary. And it is very bad that it surpasses us in the quantity and quality of combat units.

As for the purely technical side of the issue, FREMM is another example of the fact that modern ships are designed only for single shots and counteraction against point attacks. For a serious confrontation at sea, they are not ready. 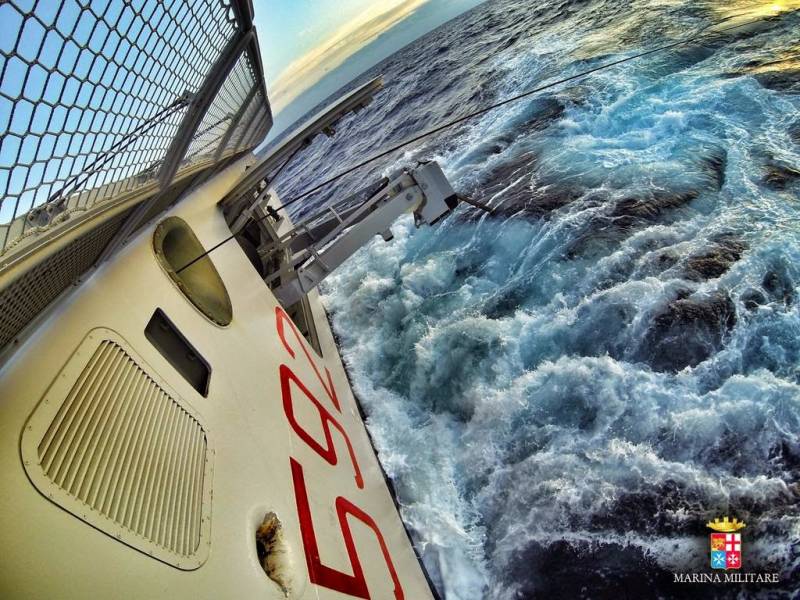