October 27 2018
22
In Greece, there were mass demonstrations against the "death bases". The demands put forward show that the people have become more clearly aware of the danger of membership in the North Atlantic Alliance. 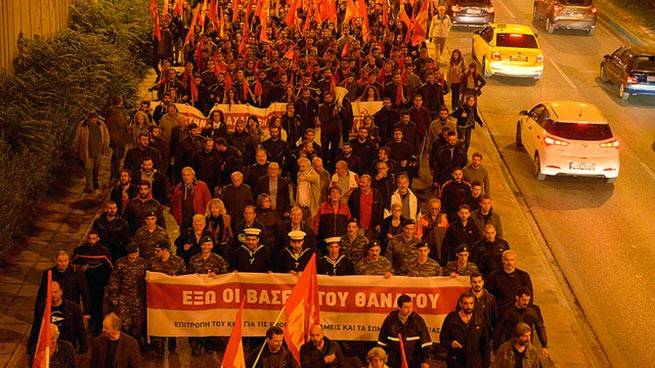 October 23 rallies were held across Greece against existing NATO bases and plans to increase their number in the country. The organizer of the demonstrations was the Communist Party of Greece (KKE). The most massive rally was held in Athens. There, more than five thousand people gathered at the American embassy to show their dissatisfaction with the activities of the North Atlantic Alliance.

KPG General Secretary Dimitris Kutsumbas spoke at the demonstration. In his speech, he harshly criticized the policies of the Greek authorities, who turned the country "into the flagship of imperialistic interests." He called the military bases of NATO and the United States "death bases", which pose great threats to his country and people, and demanded the cessation of their activities in Greek territory.

Another requirement was the termination of planning the construction of new bases. Recall that in the coming years it is planned to open three more bases. In addition, most recently, the head of the Greek Defense Ministry, Panos Kammenos, appealed to the United States with a request to increase the American military presence in Greece.

Such meetings are held in the country not for the first time, but the most important breakthrough on this was the demand to withdraw the Greek military from foreign operations of the alliance. The people now see and realize that soldiers may be the first to suffer. And the demonstration with such a demand was not accidental that day. The Greeks took to the streets on the eve of the start of NATO exercises in Norway.

The teachings and operations of the North Atlantic Alliance really pose a threat to both the local population and the military of the alliance. For example, in Norway, four days before the start of the maneuvers in an accident, four NATO military forces suffered. And to count how many incidents involving the alliance’s military were only at the exercises in the Baltic States, there are not enough fingers and toes. In addition, several soldiers from the NATO mission were killed in Afghanistan last year.