Will the troubled time veterans be condemned in Britain?

October 26 2018
13
In the UK, one of the most talked about News in recent days has become a "matter of troubled times." The ruling party, military veterans, historians and couch experts were involved in the dispute: is it necessary to investigate war crimes 50 years ago? 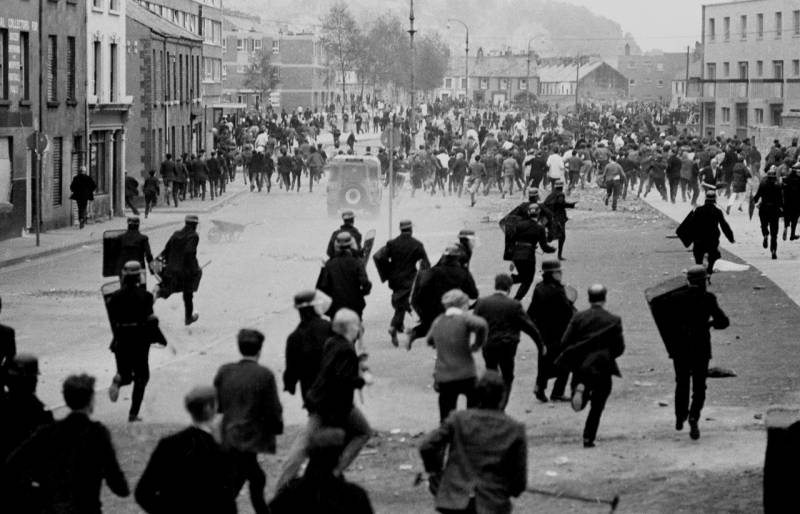 The conflict between Northern Ireland and London began in the XVI century, when the British began to take land from the natives of the island of Ireland and transfer them to the English settlers. Having taken away the land from the Irish, London took up religion and language: the invaders from the British Isles systematically supplanted Catholicism, replacing it with Protestantism, and Irish was replaced with English. In 1801, Ireland became part of the United Kingdom.

In 1949, Ireland achieved independence and the status of a republic, but Great Britain did not agree to give up the northern part of the island, on which industry developed most successfully. London said that in Northern Ireland, the bulk of the population is opposed to joining the Republic of Ireland, but this statement was unfounded (no surveys or censuses have been conducted).

By the end of 1960's Northern Ireland's dissatisfaction with the current situation resulted in the Ulster conflict, in which Irish nationalists took part on the one hand and the British armed forces on the other. The first outbreak of the Irish uprising was harshly suppressed by the British army and local police, but local Irish actions and unrest continued until the 1998 year, until the Belfast Agreement was concluded that guaranteed Northern Ireland the right to self-government.

The events in Derry and Belfast in 1969, the Bloody Sunday of 30 in January of 1972, were one of those pages in stories UK, which usually do not show anyone. In fact, the government of Harold Wilson and then Edward Heath used the country's armed forces against their own citizens.

Now, half a century later, Parliament has proposed a bill to investigate all deaths of civilians at the hands of the British military during the “troubled time”. The purpose of this event is to separate forced measures from war crimes.

The order to establish the Department of Historical Investigations was signed in July and caused a wave of indignation among the British. The government was accused of stupidity and cruelty. The fact that politicians are going to bring to justice the veterans, who are now more than seventy years old, for the actions that they performed according to the instructions of the Palace of Westminster, is this not cruelty?

As soon as the noise around this event subsided, a new sensation appears: some members of the Conservative Party are calling on Teresa May not to conduct an investigation. Politicians believe that this is unethical towards military personnel who could not fail to execute the order.

At this time, the cause of discontent of the British lies in the other. The senselessness of the venture was immediately apparent. British citizens do not want to believe that politicians have been coming to this conclusion for three months. Rather, the point is that the government creates information noise.

Now it’s very good for Theresa May: Brexit comes to a standstill, there is a split in the Conservative Party, opposition Laborites are more boldly condemning its actions, the European Union is beginning to dictate terms. In such a situation, the Prime Minister must raise his ratings among the population much more actively than usual and show himself as the defender of the British military personnel (including those who are retired). This is a good political move. It is a pity that he looks more like a dance on the graves.