Direct threat to C-300 and C-400. Unobtrusive "Axes" will challenge the defense of Russia

October 25 2018
139
Exactly three weeks from the moment of delivery of the first three anti-missile divisions of the C-300PMU-2 Favorit to the Syrian Air Defense Forces in order to demonstrate in practice to Israeli, Western European and American military specialists the highest deterrent effect created by this family of air defense missile systems. So, after 20 days after unloading elements of the first division from the cargo compartment of the An-124-100 to Avb Hamim, the Israeli Air Force did not make a single attempt to suppress the updated Syrian air defense from the Antilivan ridges; Yes, and with the use of operational-tactical ballistic missiles “Lora”, the Israelis decided to hold off by shifting the focus of rocket bombing attacks on posts and strong points of the weaker “players” of the Persian region - the Hamas movement in the northern part of the Gaza Strip and the Lebanese Shiite organization “Hezbollah”, which , unfortunately, they do not have even more or less modern self-propelled self-defense SAM systems. 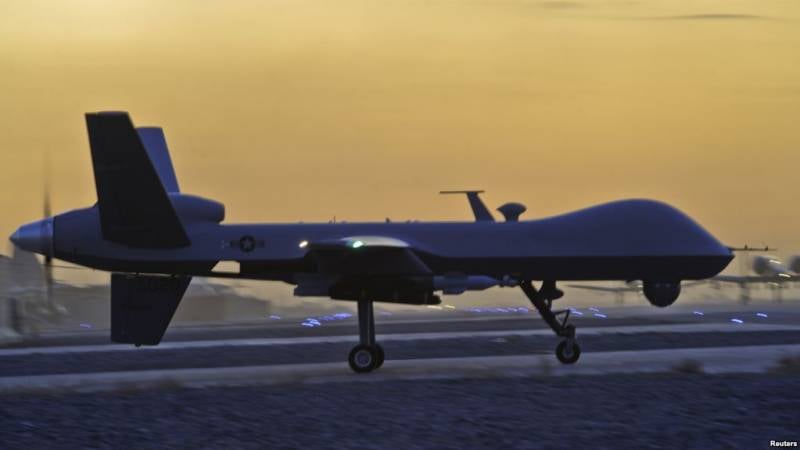 The return of Tel Aviv to such a familiar field of activity (rotting a weaker enemy at hand) is quite understandable: to use the main "anti-radar asset" Hel Haavir - difficult to intercept American small-sized planning guided bombs GBU-39B SDB ("Small Diameter Bomb" ), as well as UAB "Spice-250", the crews of the multifunctional fighters F-16I "Sufa" and F-15I "Ra'am" were forced to climb to an altitude of 10 km or more, gaining speed of about 1M. This provided the "smart bombs" with the proper kinetic energy for a flight over a distance of 70-110 km. Now, after the appearance of the S-300PMU-2, capable of "slamming" the "Raama" and "Sufa" even at the moment of ascent to the required drop height of the "SDB" and "Spice-250", Israeli pilots are forced to fly only in the mode of following the terrain, and even then only over the mountains of Anti-Lebanon, which are not subject to the 30N6E2 radar view. In such a situation, the possibility of using any type of gliding bomb "equipment" is excluded, and therefore only tactical missiles "Delida" and "Popeye" can be used, which are vulnerable to most anti-aircraft missiles in service with the SAA. The IDF understands this very well and does not climb into the A2 / AD air sectors over Syria, which is indisputable confirmation of the fulfillment of the goals set for the Russian Aerospace Forces.

Moreover, due to the prevailing circumstances, Almaz-Antey once again achieved a staggering export appeal on the world arms market, partially eclipsing Lockheed Martin with its brainchild - the Patriot PAC-3MSE. And here the question arises: how long are the C-300P / 400 and C-300В4 families of anti-missile systems ready to maintain strong dominance in the theaters of military operations in the Middle East, Europe, etc.?

If we look for the answer to this question in the plane of the most well-known and sensational projects of supersonic and hypersonic high-precision missile weapons, then it becomes clear that the initiative will remain in the hands of our military air defense and videoconferencing systems for the next 15 — 25 years. This state of affairs is vividly demonstrated when assessing the ambitious Israeli project of a heavy supersonic long-range tactical missile Rampage, on which the IDF has high hopes today. Developed by the Israeli military industry leaders Israel Military Industry and Israel Aerospace Industry, it is absolutely impossible to rank it as a short-range aeroballistic missile. "Rampage" is equipped with a small nasal aerodynamic rudders and has a "duck"; the area of ​​these rudders is so small that the rocket does not have the ability to make vigorous anti-aircraft maneuvers (typical of the Iskander-M OTB) and is more like an air-based guided missile. Low maneuverability, the height of the trajectory in 15 — 30 km, impressive EOC of the order 0,1 square. m (due to the decent geometric dimensions) and the speed of everything in 3 make the Rampage vulnerable not only for the Syrian three hundred, but also for the Buk-M2E military air defense system. It is logical that these missiles of the Israeli Air Force can only be used against Hamas and Hezbollah, and even then in territories that are not covered by the Syrian anti-missile umbrella.

But for a more accurate answer to the above question, it is necessary to deviate from the standard analysis of the highly publicized means of high-precision rocket weapons possible opponent and try to consider alternative projects that have not received such wide publicity in the world media due to the fact that they do not belong to the main types of rocket-bomb weapons. One of them is the project of a super-small-sized “Hatchet” (“Hatchet”) controlled bombs from the American company “Alliant Techsystems” (ATK). For the first time, the demonstrator of this 60-mm bombs, which was designed to be placed on the suspensions of attack and reconnaissance UAVs of the MQ-1C "Gray Eagle" and MQ-9 "Reaper" families, was put on a wide display in the spring of 2012, during the exhibition prepared by the Military Sea League USA. After 5 years, the concept was presented at the Army Aviation Mission Summit exhibition in Nashville, Tennessee, after which it was decided to conduct full-scale tests of the first prototypes of Hatchet in 2018 in the headquarters of the company-developer. ATK specialists are engaged.

This bomb has a shell diameter 60 mm, length 301 mm and weight 2,72 kg, so that two underwing MV-9 "Reaper" UAV suspension units can be placed 2 500-pounds of this type of 108 UAB (54 each), mounted on rotor rotating pylons in the internal niches of containers. For the MQ-1C “Gray Eagle” drone reconnaissance UAVs, more compact containers on the 12 suspension units (3 units per 4 units) have been developed. The Gray Eagle is capable of accepting container data (4 Axes) on 48 suspensions. If we talk about placing "Hatchet" to a "high-torque" tactical fighter F-16C Block 52 + / 60 and F-15E «Strike Eagle», the power elements of the wing and ventral nodes suspension was allowed to equip them with 6-8 500-pound containers with 324 — 432 Hatchet small bombs.

As you can see in the photo of the demonstrator, the tight placement of the “Hatchet” in the inner niches of the containers is achieved by equipping the product with three truncated triangular wings made of flexible composite material and fixed to the self-opening (due to the spring mechanism) hinges. As a result, while they were in the niches of transport and launch canisters, the “Axes” wings were rolled up in roll type, repeating the contours of the bomb hulls. Narrow tail aerodynamic steering direct type, having the same span as the wings for planning, also equipped with a mechanical opening system (with 90-degree turning in the control axis); they are located in a separate tail module with servos, which is mated with the housing by means of a nut for an internal hexagon. The design is very simple, and therefore there is nothing difficult in mass production of hundreds of thousands or even millions of similar products. 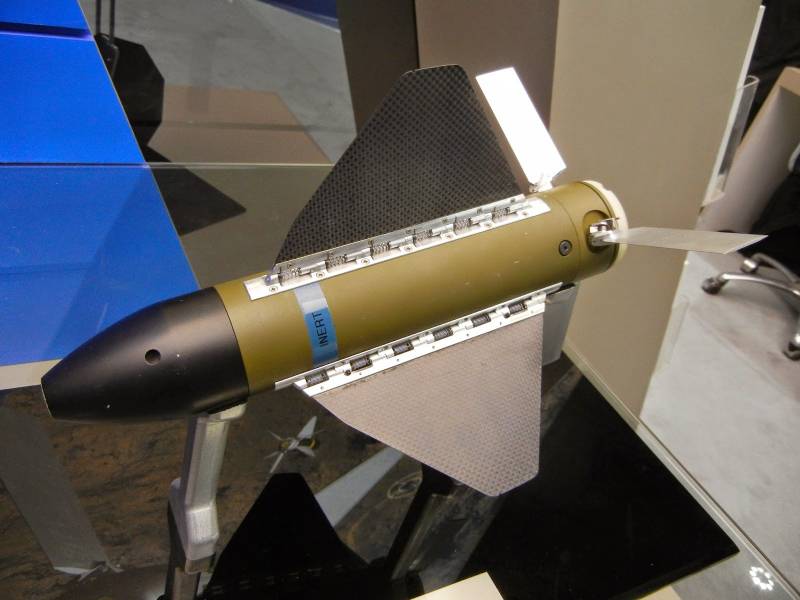 Considering the fact that almost the entire 60-mm body and wings of the Hatchet guided bombs are made of composite materials (except for hinged wing loops and tail aerodynamic rudders made of aircraft-grade aluminum), it is easy to assume that the effective dispersion surface of an attacking bomb with open planes does not exceed 0,003 — 0,07 sq. m. (depending on the angle of exposure and the frequency of the radar). The most unpleasant moment in all this stories is that the 30H6X2 and 92H6E C-300PMU-2 “Favorit” and C-400 “Triumph” radar radars are unable to process such small-sized objects, and the radar aids of the ZRPK-templates-Creators-systems that are not capable of processing such small-sized objects are incapable of this, and the Radar-based radar systems are also unable to process such small-sized objects. -M1U ", covering the" dead zones "of long-range air defense missile systems. Conclusion: our air defense systems are extremely vulnerable to such precision weapons; Moreover, its use can be massive due to the low cost of production technology.

Readers may have a completely adequate question: what threat can come from these dwarf air bombs when their carriers (Reapers, Gray Eagles and tactical fighters of the USA or Israel Air Force) are destroyed by C-300PMU-2 and C-400 complexes? long before the deadly dumping of "equipment"? There is no point in going far for an answer. It is quite logical that this “equipment” can be integrated as combat units of the SM-6 ultra-long-range missiles, or tactical ballistic missiles of the ATACMS family, capable of providing the Axes at heights from 33 to 55 km, beyond the high-altitude boundaries of the 48HM missile systems. .

The key to countering such complex means of air attack can only be high-frequency EMI generators that disable the electronic “stuffing” of Hatchet missiles on the approach, or the Arena-M and Afganit active defense complexes located on specialized masts next to each element of the anti-aircraft missile system. Moreover, it is worth considering the presence of the “Axes” semi-active laser homing head, integrated with the GPS-correction module and the INS. The first one can be “hammered” by setting up a smoke screen, and the penultimate one - with the help of the electronic warfare stations “Diabazol” and R-330G “Resident”.