October 25 2018
12
Despite many legends and myths, the Angara remained a control ship. Marshal of the USSR and Minister of the Armed Forces of the Union Alexander Vasilevsky, Admiral of the Soviet fleet and Deputy Minister of Defense of the USSR Sergey Gorshkov, Marshal Kliment Voroshilov, Admiral Commander of the Black Sea Fleet Vladimir Kasatonov, etc. At the same time, the thread of representative functions was stretched through the life of this ship.


In October 1962, the ship was visited by real heroes of that time who, in their glory, could eclipse any Western “star” or modern homegrown star, cosmonauts Andrian Nikolayev and Pavel Popovich. More recently, in August of the same year, Popovich and Nikolayev made the first manned flight in the world on two ships at once: Vostok-3 and Vostok-4. 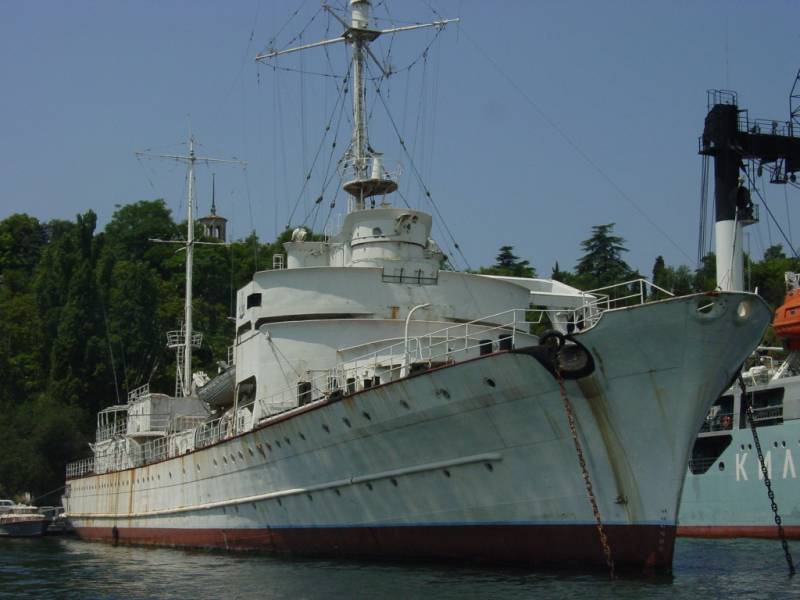 It is clear that Angara played an important role on the Black Sea. But not everyone knows that often the ship in fact literally "played a role." In Vladimir Basov’s film “Seven screams in the ocean” (1986 year) “Angara”, the “Spes” airliner played on the screen. True, it is worth noting that the not always elegant “Angara” appeared in the frame with the beauty of the lines of its hull or the teak deck. As exemplary representative ship. Often only the interior was displayed on the screen. Anyway, according to various sources, “Angara” was filmed in “Neutral Waters” (1968 year), “Dismissal ashore” (1962 year), “Two captains” (1976 year) and in other films. 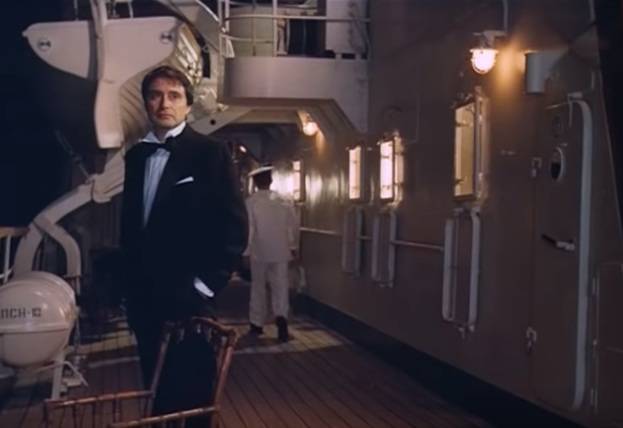 Veniamin Smekhov on the deck "Angara" ("Seven screams in the ocean")

In 1980, the Angara was docked and repaired in Greece, presumably in Ermoupoli on the island of Syros. Perhaps, this was due to the fact that, in addition to the natural repair work of the hull, equipment and ship machinery, they also took care of the interior. On the ship appeared two-room and three-room cabins with truly exceptional amenities for our fleet. True, nothing changed for the crew - everything was the same as on the other ships of the fleet. In fact, the officers did not use special chic. All the "special rooms" were intended for high guests. 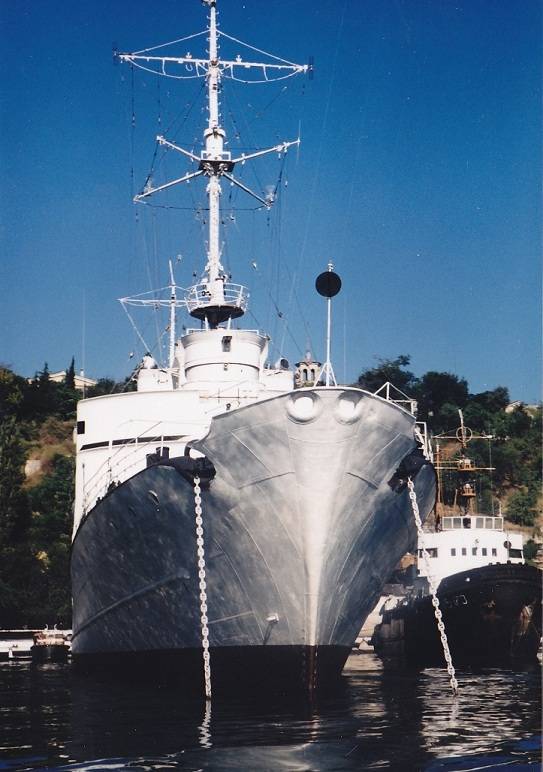 It would have served as a representative "Angara". Perhaps it would even become a museum. But the collapse of the Soviet Union struck. Yesterday's "brothers", or rather, their elites, despite all the subsidies from Moscow for the entire Soviet period, turned out to be more hungry than winter wolves. In this gambling race, there were neither fans of the refined contours of the representative Angara, nor her particular 30-s of the 20-th century, so there were no views on it from the “non-intellectuals”. The ship remained in the Black Sea Fleet.

However, whether due to lack of funds, or because of the hard times, the Angara was literally added to the pier. In the sea, the ship no longer went. And in 1994, a fire broke out on the Angara, leaving many questions. But even after this incident, up to 1996, the ship was listed as part of the Black Sea Fleet. Even the commanders changed: from 1986 to 1996, the captain of 1 Grade Vnukov, from 96 to 98, Captain 3 of Sobolev, and the last commander (alas, in fact the “boss” of an almost non-self-propelled barge) from 98 by 2001 year became the captain of the 1 rank Viktor Sergeevich Klimenko. 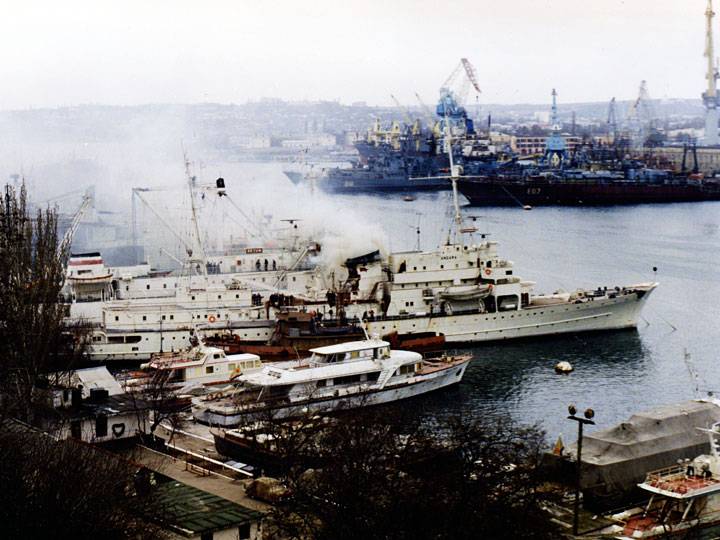 Fire on the "Angara"

24 April 1996 received a directive from the headquarters of the Black Sea Fleet, according to which the Angara command ship was disbanded. From now on, the glorious trophy veteran would become a floating squad with a characteristic renaming to PKZ-14 Floating Barracks.

Breaking is not building. Therefore, by September 1 of the same year, the radar equipment and other technical means were dismantled from the ship, which, in fact, made it a control ship. Truly a warship that saw the first persons of the superpower of the USSR and the leaders of other countries who worked history, became a barracks on the water. True, the flag "Angara" still left - 13 May 97-th Andreevsky cross flew over the deck.

It seems there was a little hope that the "Angara" will not stand in a long line "on the needles." However, less than a year later, at the orders of the authorities, the ship again appeared, and again with a “crowbar”. As a result, the military transferred the "PKZ-14" to the civilian crew, in addition with a significant personnel reduction. 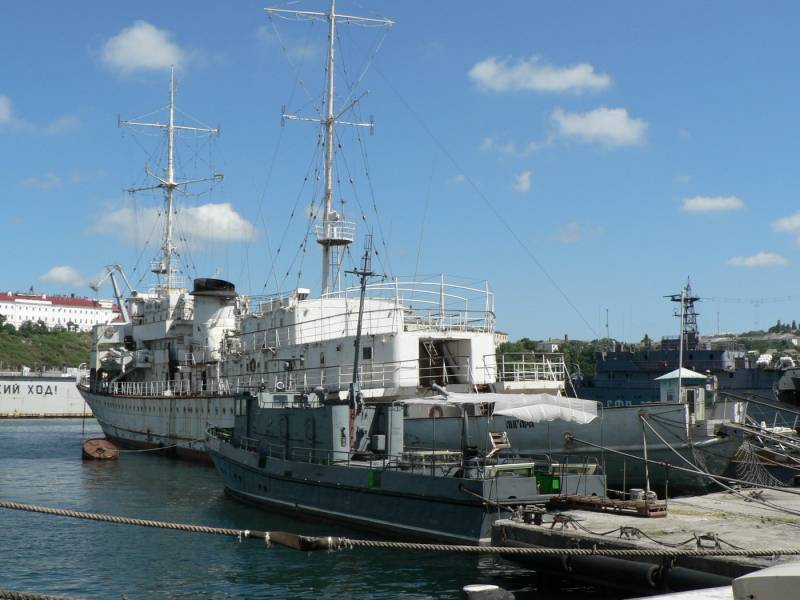 30 September 2001 of the year, the crew of the ship was completely reduced, and the ship was transferred to commercial sales, i.e. the unique control ship nevertheless decided to “push” with a hammer to some “private trader”. Moreover, such a “wise” decision of the high authorities was justified by the fact that the money obtained from the sale of the Angaras would be mastered by docking and repairing the cruiser Mikhail Kutuzov, which was transferred from Sevastopol to Novorossiysk and included in The composition of the Novorossiysk naval base.

This detail looks very piquant against the background of the desire to return Kutuzov to Sevastopol, which has sharply intensified among some “initiative groups”. After all, there is no information about the flow of funds to bring the cruiser in order. And all the more curious in this light are the attempts of some citizens to accuse Novorossiysk of the neglected state of “Kutuzov”. Firstly, where were you when you wrote off the Angara at the same time as the cruiser was being transferred? Secondly, at the moment “Kutuzov” belongs to the Ministry of Defense, and none of the civilians will be allowed on him to a cannon shot. Even coordinating filming aboard a cruiser is not an easy task. 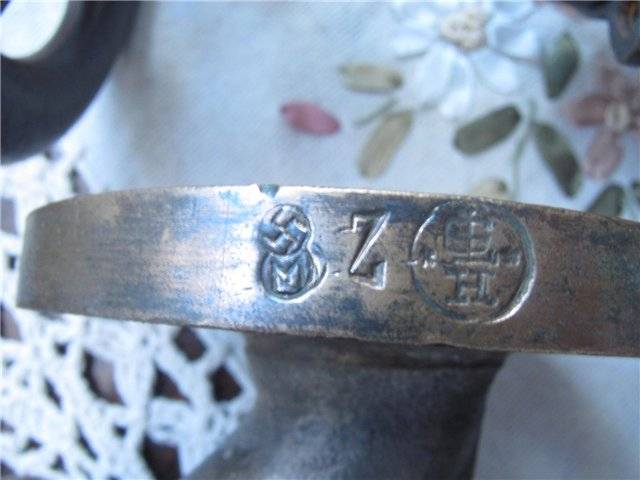 Sample photos under the announcement of the sale of "rarities" Angara "

But back to the fate of "Angara". Soon after all the collisions with the ship, in the network there appeared proposals to buy this or that “piece” of the legendary vessel, so to speak, as a keepsake. Particularly popular began to use the valves with the Nazi symbols preserved on them.

In the 2005-2006 years, information about a foreign initiative to buy a ship flashed in the information sphere. Krupp steel case turned out to be more than in fair condition. According to one of the versions, Angara was going to buy out a German company, for which this ship after repair would become the hallmark of "true German quality." The fact is that the shipbuilding company “Stulken Zon” (HC Stülcken Sohn), though it ceased to exist in 1966, but in fact simply merged with another larger company, Blohm + Voss. The latter, by the way, also joyfully cooperated with the Nazis and used the slave labor of concentration camp prisoners, and literally ten years ago built and sold Roman Abramovich a chic yacht Eclipse. 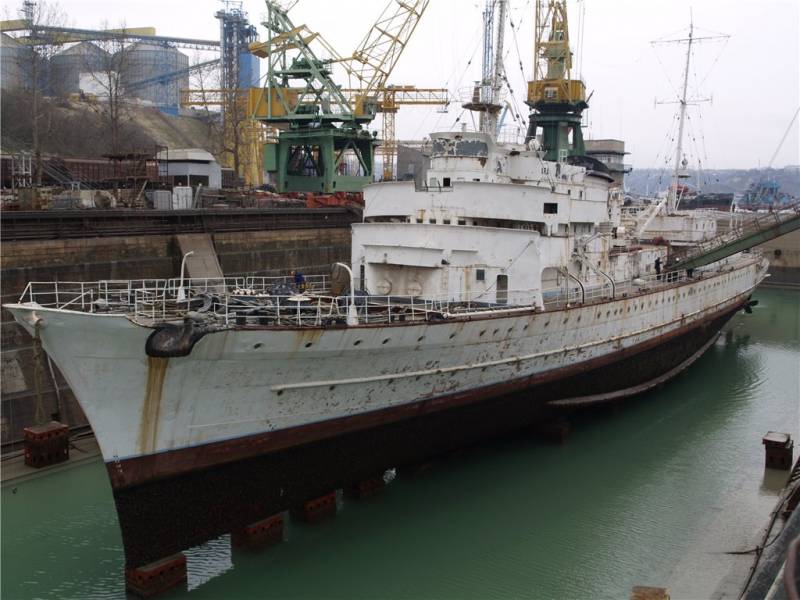 However, in May 2006, the Interfax news agency reported that the Italian company Elleci Trasporti srl had placed an order with the Central Chernomorets design bureau in Sevastopol to create a project for converting the Angara control ship to a representative ship with an unlimited navigation area. The main condition for the Italians was to preserve the original appearance of the vessel. Also in the message of "Interfax" were quoted the words of the chief designer of the TsKB Viktor Prozorov: according to preliminary data, the design will take about 30 months. 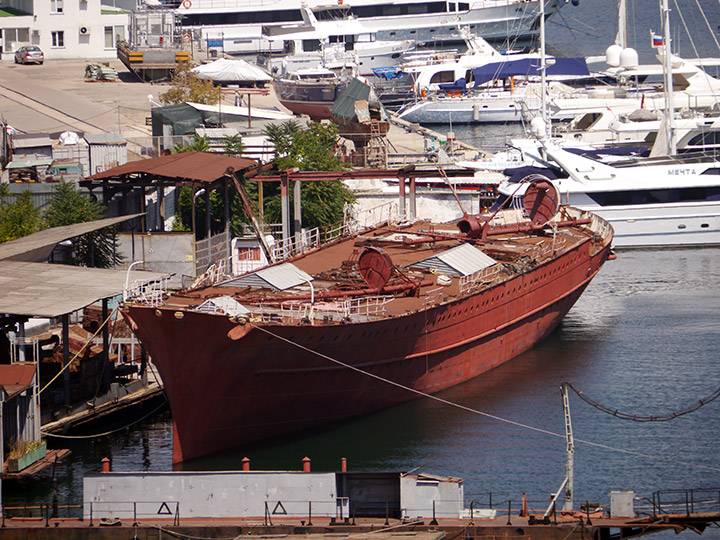 Angara at the moment

I don’t know how time is spent with designers and how windy Italian customers are, but at the time of 2018, the Angara building is located in the South Bay of Sevastopol. The ship has long lost its snow-white color, the superstructures were finally cut off, and only the hull lines remind of its “aristocratic” origin, despite the dirty-brick look. Perhaps the hope that the "Angara" will be reborn, is there still? But I am not an optimist.