October 25 2018
21
A rigorous science says that malodorous formulations in small concentrations affect the olfactory system, exerting psychological influence and causing a change in behavioral responses. That is, they force a man to frown and, in horror, to abandon combat positions in search of a breath of fresh air. Much more serious, "smelly" compositions act in medium and high concentrations: they reduce the volume and frequency of respiration, increase the skin-electrical reactions, and also cause tachigastria (complex disruption of the stomach, often with vomiting).


History so unusual weapons non-lethal action began in the 1940-ies, when, under the supervision of the US National Defense Research Committee (US National Defense Research Committee, NDRC) developed a fetid composition with a persistent odor of feces. In parallel with them, the Office of Strategic Services of the United States, which later became the CIA, worked on sabotage grenades, curb compositions that have the smell of rotting. For a long time, work in such areas was classified, and in 1997, the NDRC released a whole atlas of smelly substances. It turned out that in the USA all this time they had been doing painstaking work in this “offensive” direction.

The main bonus of such delicate gases was their protection against international conventions banning the use of chemical weapons. In the USA, they even developed requirements for offensive compositions:
- the smell should be very unpleasant to bioobjects;
- the smell is obliged to quickly affect the biological object and spread rapidly;
- the toxicity of the composition in working concentrations should not exceed safe for health levels. 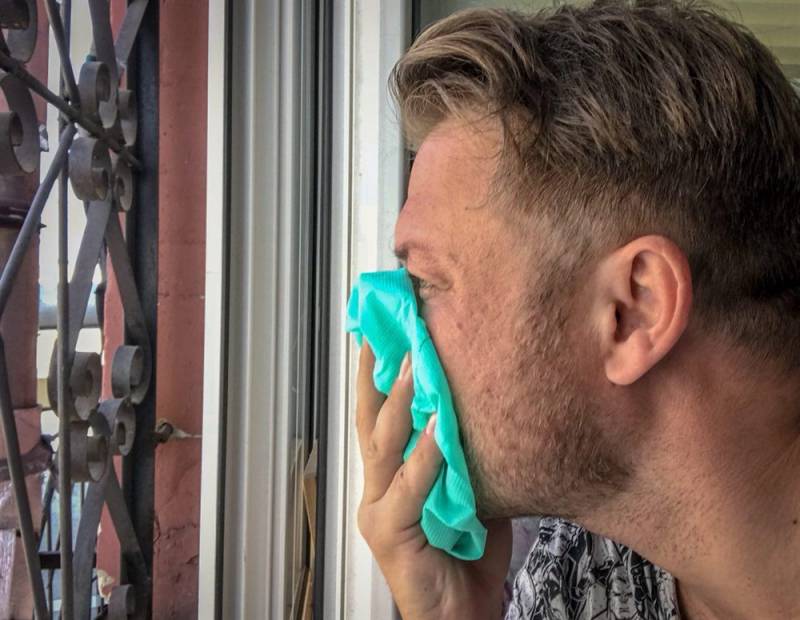 The authors of such a foul-smelling weapon had the greatest difficulties with an objective assessment of the perception of smell, since this is influenced by the sum of factors: gender, age, nervous system characteristics and the human hormonal background. In addition, the responses were quite wide: from a slight discomfort to instant nausea and vomiting. Over time, chemists came to a universal structure of a foul-smelling composition that includes: a solvent (water or oil), an active component (one or more odorants), a fixative and an odor enhancer (for example, skatole). Of course, the main active ingredient responsible for the "flavor" is the odorant (from the Latin. Odor - smell), which is added to the gas or air. Usually it is some kind of sulfur-containing organic compounds with a strong disgusting smell. For example, these include mercaptans, familiar to everyone by their characteristic odor from a household gas pipe. These compounds (aliphatic thiols) are specially added to natural gas, so that in the most minimal concentrations the human nose can accurately determine the leakage. And what will happen if such thiols are used in a concentrated form? Their toxicity is insignificant, but the threshold of perception by the olfactory system is very low, and skunks use this, producing a complex mixture of thiols in their fetid secret. For fixing (stabilizing) the smell in non-lethal fetid weapons are already used perfumers. Skatol or 3 – Methylindole, produced in the intestines of humans and many animals, is excellent for the role of odor fixer. In small concentrations, the skatole has a creamy-milky smell, and upon further dilution, the scent turns into floral. In a concentrated state, its smell is no different from fecal. 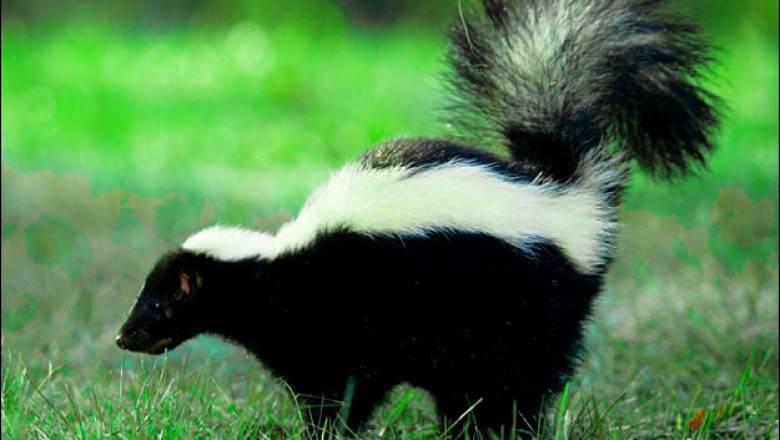 Skunk one of them first came up with the use of mercaptans as a non-lethal weapon.

Smelly compositions are used as in the form of aerosols, but it is more effective to dilute with water and then spray it on disgruntled citizens with a water cannon. And if you appropriately dye the liquid composition ... There are also real samples of hand grenades and grenades for rifle grenade launchers filled with smelly compositions based on concentrated skatole and mercaptan. Throwing agent increases the area of ​​action of the ammunition, scattering smelly substance in the axial or radial directions. 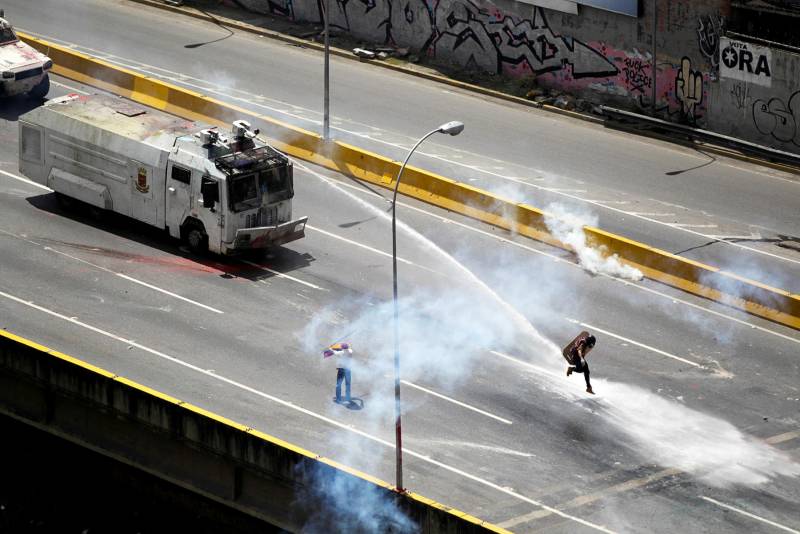 Offensive compositions can be an excellent addition to water cannon tanks.

The second fairly rare commodity on the non-lethal chemistry market was the super-slippery substances responsible for disabling vehicles and biological objects by depriving them of the ability to navigate normally. And again, Americans were among the first: the National Bureau of Standards (NBS) and the American Society for Testing Materials (Southwest Research Institute) did a lot of work and eventually created a super-slippery composition. It consists of acrylamide polymer with dispersed polyacrylamide, hydrocarbon and water. This whole “how much theme” can be diluted in an oil lubricator, which is used, for example, to lubricate wells for wells. The long list of substances suitable for creating super-slippery compounds includes various fats, oils, polysilicones (DC 2000), polyglycols (Carbowax 2000), as well as sodium oleate, glycerin, and also mass of complex organic substances. The requirements for such non-lethal weapons are the following: environmental friendliness, wide temperature range of use, low toxicity of the composition and high enough viscosity suitable for application on inclined surfaces. American chemists plan to use such compounds even against tracked vehicles, however, when applied to solid concrete and asphalt surfaces. Sand with loose earth adsorbs such liquid know-how, and only a person can slip on it. The most promising substance for creating super-flexible substances that satisfy all the requirements of the military are pseudo-plastics consisting of two components: a viscous liquid of anionic polyacrylamide and solid particles of the same chemical nature. To bring the composition into a combat state, it is pre-mixed. The result is a homogeneous viscoelastic gel that can withstand vertical loads and does not flow under the action of a man’s sole or car tread. It acquires its properties after 40-60 seconds from the moment it is applied to the surface. Usually we are confronted in nature with wet ice, which is considered one of the most natural surfaces. However, the American gel is much more insidious - a person with great difficulties can pick up a step to move on it, and the car generally remains to grind the surface with tires in place. 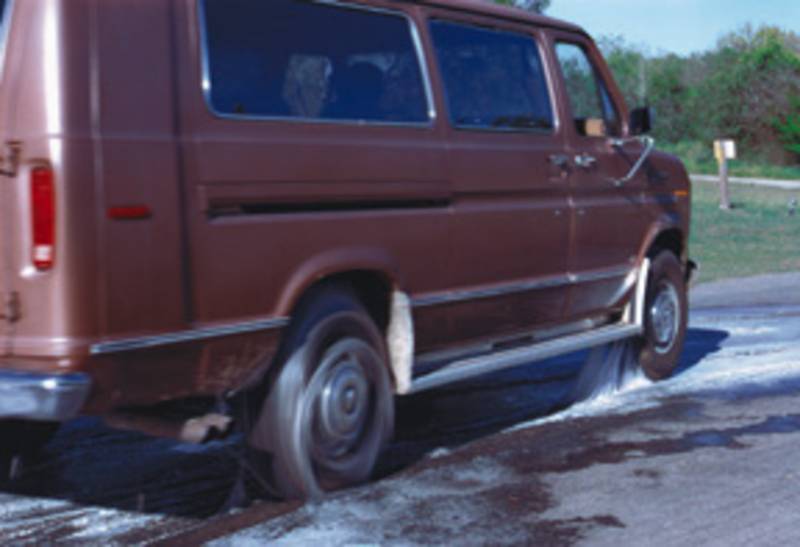 The system of prohibition of mobility in action - depriving the car of the ability to move. 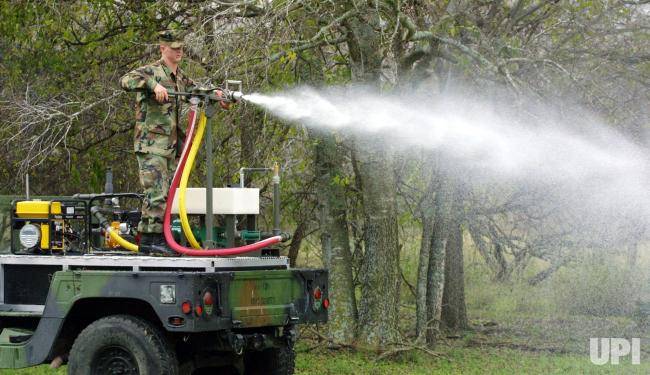 Based on this development, the US Marine Corps ordered the development of the Mobility Denial System (MDS), which makes it impossible to move a person and transport on a solid surface directly on the 6-12 hours. Such a gel is sprayed from a wearable device or special military transporters. 23-liter tank is enough to handle 183 m2 areas with an effective spraying distance of up to 6 meters. The tank carried on the Hummer is much larger - its 1136-liter stock of water and 113,5 a kilogram of gel should be enough immediately for 11150 m2 with the spraying range in 30 m. The downside is the need to dilute the concentrate with water, which can be taken from the nearest puddle or other natural reservoir, and this can drastically reduce the final efficiency due to harmful impurities in the liquid. 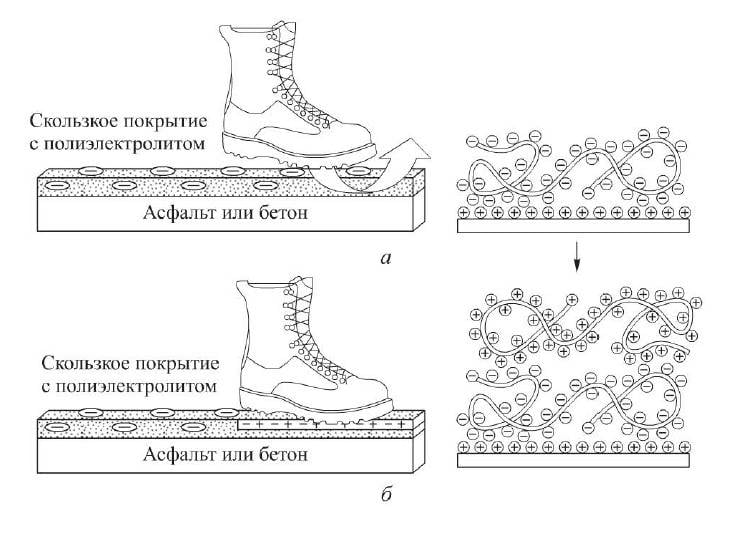 Developments that have the opposite effect carry value: decomposing superslip matter, which allows soldiers to move freely throughout the territory treated with "chemistry" of the Mobility Denial System type. Compounds that decompose slippery gels in a few milliseconds are applied to the soles of shoes or equipment wheels. And the fighter, as if magnetized, walks along a super-slippery gel.