30 May 2012
12
May 24 at the Indian range "Chandipur" passed successful tests of the air defense system "Akash" developed by the Indian military-industrial complex. “These tests were carried out as part of routine training for the personnel of the air defense units and were generally considered successful,” said one source, who was closely associated with the national program “Akash”. In the tests conducted, an anti-aircraft missile fired from the Akash complex intercepted an “enemy” drone in the sky.

The design and development of this air defense system began in India in 1983 year. Works were carried out according to the Integrated Guided Missile Development Program. After the end of a rather long period of time, during which they were tested, and refinement of the anti-aircraft complex, it was put into service only in 2008. The companies Tata Electronics and Bharat Dinamix Limited, the members of DRDO, were the first to start work on the creation of a guided missile weapons. Akash, a joint venture of Indian companies and enterprises, was ready for testing in 1990.

The complex was developed by the Indian state organization of defense research and development "DRDO". In addition to air defense units, the “Akash” air defense missile system will also be delivered to the Indian Air Force as an intermediate-range air defense system. Indian designers who developed an anti-aircraft complex, declare that in their basic characteristics Akash can be compared to the American Patriot, provided with MIM-104 missiles. The anti-aircraft missile system is able to destroy the following air targets:
- fighter aircraft;
- unmanned aerial vehicles;
- various modifications of cruise missiles; 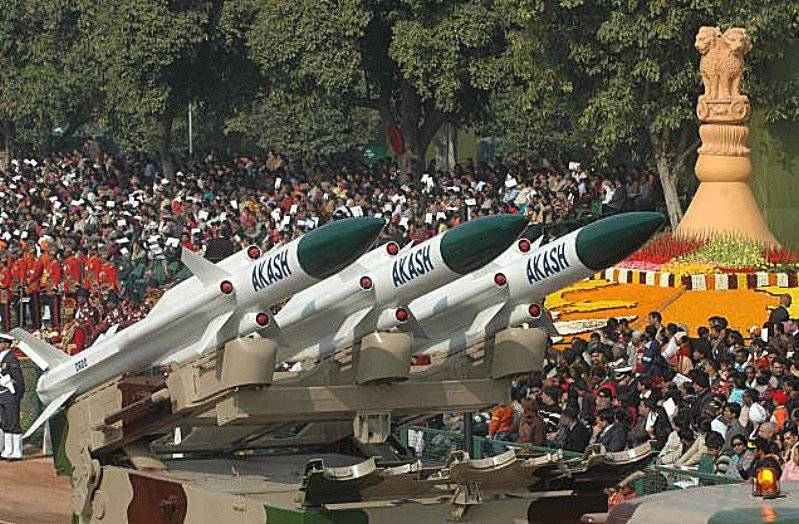 For many years, the top leaders of India have been implementing their own program to create controlled-type anti-aircraft missiles. And despite the high final cost and pressure (disapproval) of some countries, India does not refuse and consistently implements all the complex work under this program. A promising goal is to build up and develop an industrial and research base for the future provision of armed forces with the latest and most effective missile systems.

At this time, work is being completed on the development for the Indian Air Force, the medium-range anti-aircraft complex on the Akash platform. The main purpose is the destruction of air objects that have a sufficiently high speed of movement, when the enemy uses means of jamming. The Akash complex will be delivered to the troops, in several versions, to provide air defense of important facilities and military units of the Indian Armed Forces. The upgraded medium-range complex "Akash" will be able to intercept tactical and operational-tactical missiles. The range of the air defense missile system will be increased by 40 kilometers, due to the installation of anti-aircraft missiles of the latest model of the cruising engine. In addition, anti-aircraft missiles of the medium-range complex will be equipped with infrared homing heads and will improve the performance of the Rajendra radar, which is part of Akash. Radar «Rajendra» developed by an Indian company «LRDE», also included in «DRDO». Actively developing another version of the anti-aircraft complex to meet the needs of the naval forces of India.

All of the above elements are mounted on specially upgraded chassis from the BMP-2. Starting can also be performed on cars "Tata" trailer type.

Guided anti-aircraft missile SAM "Akash"
Zour in terms of external characteristics strongly resembles the anti-aircraft missile of the Russian ZRK SD "Cube" and has a "turning wing" scheme. The rocket received 4-e aerodynamic surfaces, which are located in the central part of the body and perform the functions of wings and steering surfaces. They are driven by pneumatic actuators and control the pitch and flight path of the rocket. Located at the end of the rocket body, the aileron stabilizer controls the roll roll. The solid propellant engine accelerates the rocket at launch to the speed of 500 m / s in just 4.5 seconds. Next, the engine of the combined type (solid propellant rocket motor and ramjet engine) is activated, which increases the rocket speed to 1000 m / s in half a minute. The composition of solid fuel for a rocket engine includes nitroglycerin, cellulose nitrate and powdered magnesium. The oxidizer is atmospheric oxygen. The aggregate component of the ramjet engine is located in the central part of the rocket body between the aerodynamic planes. 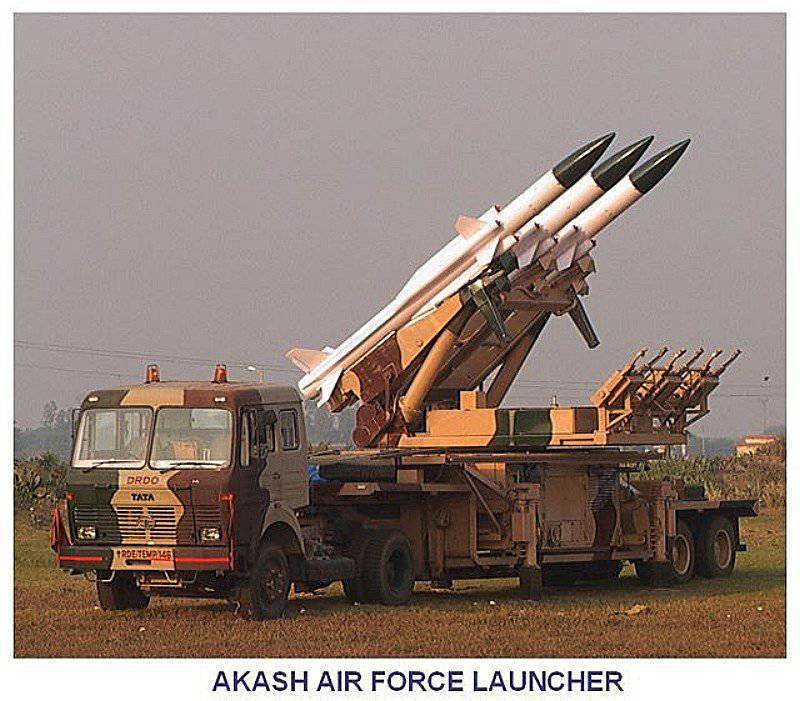 Launch SAM "Akash"
PU self-propelled anti-aircraft complex type designed for transportation, storage and launch of anti-aircraft missiles "Akash". The design of the PU - the base (platform and chassis) and turning part with 3-me rail guides. The platform houses vertical and horizontal guidance mechanisms, electrical equipment and equipment for the preparation and launch of anti-aircraft missiles. To reduce the mass of the launcher, Indian designers have executed many elements of the design of aluminum alloys. To stabilize the pivot, a torsion balancing mechanism was installed. Power supply launcher - gas turbine autonomous execution. It provides 3-x alternating-type phase current (200 / 115 B) with a frequency of 400 Hz. A servo-type power drive provides vertical and horizontal guidance and synchronous rotation of the rotating part with anti-aircraft missiles in the direction of movement of the target.

PU equipment:
- navigation equipment;
- equipment of topographic location;
- equipment of orientation on the terrain;
- CRNS NAVSTAR receiver. It was developed with the help of American specialists and is produced in India at one of the DRDO factories. 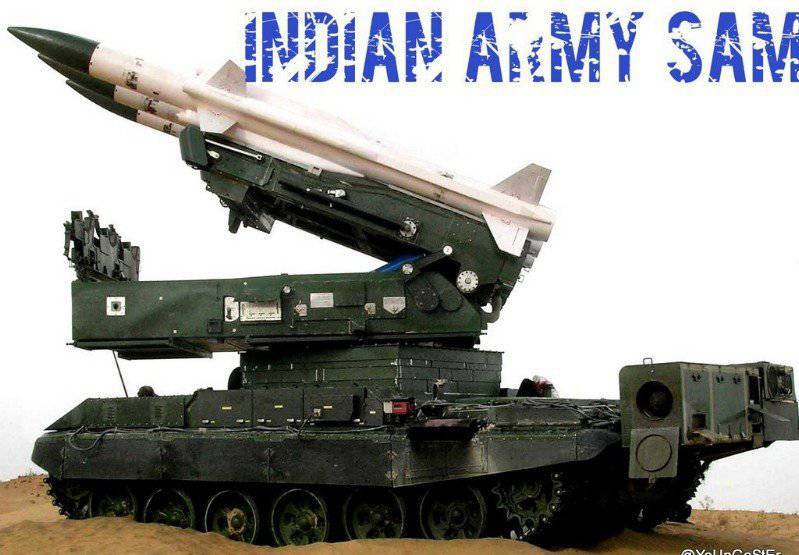 Radar "Rajendra"
The multi-purpose radar station Rajendra is designed for searching, capturing and automatic tracking of flying objects at a distance of up to 60 kilometers, determining the state belonging of the detected objects and targeting anti-aircraft missiles at them. The radar is capable of directing 12 missiles at 4 targets detected in the face of strong opposition. The Rajendra station is provided with an integrated system for monitoring basic functions and detecting faults. The radar is controlled by a high-performance digital complex installed at the control point. Antenna system - three antenna arrays and outgoing beam control equipment. The main G / H-band transmit / receive antenna, operating at 4-8 GHz, consists of thousands of 4 elements. The M-band pointing antenna, operating frequency 8-20 GHz, consists of 1-th thousands of elements. The recognition antenna consists of 16 elements and is used to define "friend or foe". 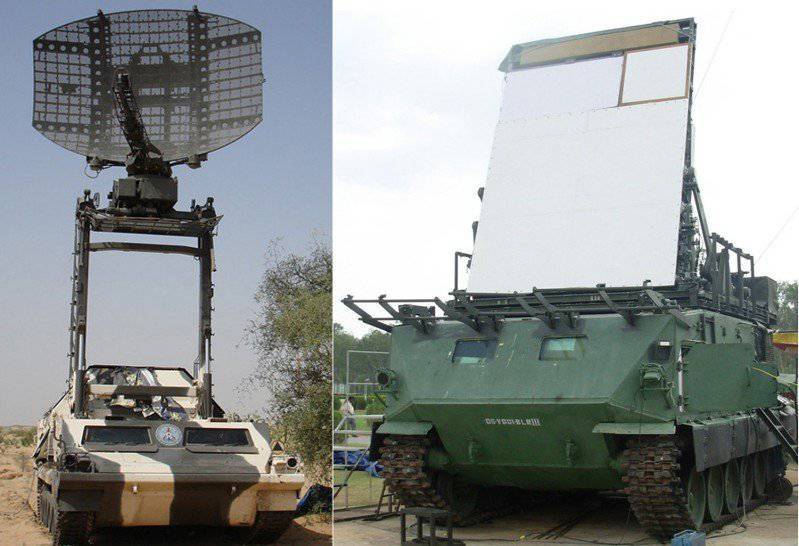 The control point of "Akash"
The control point is designed to coordinate the functioning of the entire complex. It collects data and processes information from the radar and launcher, and targets are determined and accompanied by 1-64. It performs the evaluation of the detected objects, the calculation of data for the launcher and the missile defense The main work of the control center is automated by means of a high-performance digital complex connected to the workplaces of operators and the commander of the complex. It can work independently (autonomously) as part of a combat unit (battery) of the air defense system, as well as centralized, as part of a battle group (division), from the main command post.

One combat unit of the air defense system "Akash"
One unit is considered a combat battery, which includes:
- 4-launchers with anti-aircraft missiles, the total number of 12 units;
- 1-a multifunctional radar "Rajendra";
- 1-n control point.

It can be used both as part of a battery and as part of a division. When using a battery as a separate combat unit, 2's X-axis target detection radar is attached to it. Division - is a tactical unit, it consists of:
- up to full 8 batteries;
- 3-x coordinate radar to detect targets;
- command post in the composition, which includes communications and automation.