October 22 2018
39
About forty years ago, Chingiz Aitmatov wrote the famous novel “A Day Lasts for More Than a Century” (later reprinted under the name “Buranny Station”), in which he described the cruel customs of medieval Steppe. Then the winners of the prisoners made mankurts. The prisoners were tied up, the raw skin of an animal was tied onto their heads and left under the scorching sun for a whole day. The skin dried out and shackled the heads of the unfortunate, delivering incredible flour. Most, unable to endure such torture, died. Survived units. But they lost their mind and memory, blindly and unquestioningly obeyed their master and, at his behest, committed any criminal acts. Mankurt did not even recognize his own mother and killed her at the order of his master. 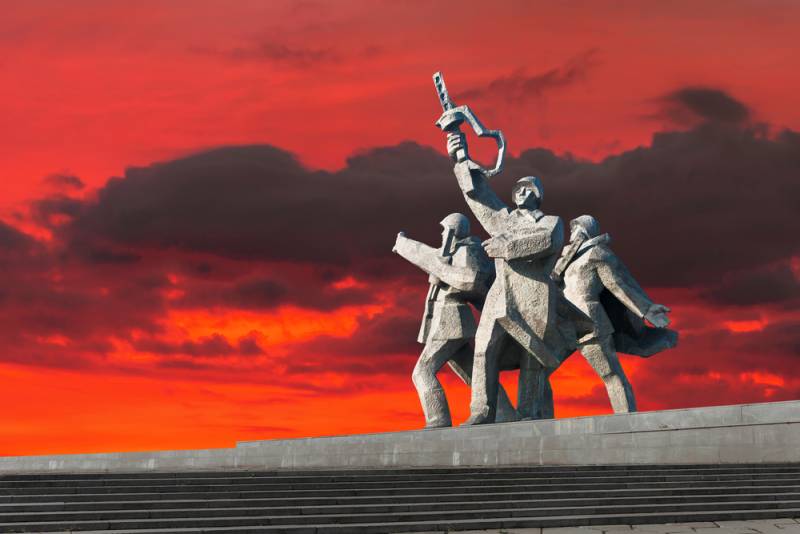 Watching the events taking place today in the Baltic States (and in Poland), expressed in Russophobic hysteria, defamation of everything Russian, the demolition of monuments to Soviet soldiers and the exaltation of the Baltic SS men, involuntarily recall the steppe poor fellows who were deprived of memory and reason.

Baltic politicians who emerged in the foam of perestroika do not even realize how savage their attempts to present the evil of their countries as part of the USSR are much greater than the occupation of these countries by Nazi Germany. This is despite the fact that secret German documents, including the Ost plan, which determined the fate of the Baltic peoples in the event of Germany’s victory, were published long ago and in many sources.

Thus, in the “Memorandum” of Rosenberg, Reich Minister for the Occupied Eastern Territories, of 2 on April 1941, it was ordered to turn Estonia, Latvia and Lithuania into a “German settlement territory, designed to assimilate ... local elements ... the area, then begin to settle the Baltic States by large masses of German peasants ... it is possible that the Danes, the Norwegians, and the Dutch would be resettled to these areas, and after the victorious end of the war and the British, in one or two generations, to join this country, already completely Germanized, to the indigenous lands of Germany. ”

By the way, Himmler, pursuing the same goal, outlined a twenty-year plan, which "should include complete Germanization of Estonia and Latvia ... we should accomplish this as much as possible within 20 years."

It is noteworthy that, in line with the centuries-old European policy of Drang nach Osten, the Baltic peoples as such, in their national being and mentality, are not counted as European nations, and they should be either largely replaced by immigrants from Europe, or completely Germanized. At the same time, neither in Russia, nor even in the USSR, with its policy of internationalism, was there any purposeful policy of Russification of the Baltic peoples.

The above mentioned policy of Nazi Germany is nothing but genocide. However, the current generation of Balts spits in the direction of Russia and arranges parades of the SS. To explain this with something other than loss of memory and mind is impossible.

The fate of mancourts is sad. And let today the “Germanization” of the Baltic peoples is carried out not so much on the lands of the Baltic States proper, but in the course of the forced to survive trips to Europe’s strawberry beds (followed by the whole family), the end result of Europeanization will be the same: the loss of one’s own culture, self-identity and the extinction of these nations. As we observe in the current reality.

I think it is in the common interest to help our neighbors restore memory and turn on the mind. It would be necessary for our state and public structures to remind these neighbors more often about the fate that Europe has prepared for them in the past, and to explain the vector of their current movement.

And, of course, it is hard to point out their ingratitude and dishonesty, to demand an end to the mockery of the graves of the fallen Soviet soldiers.