October 22 2018
33
Recently, the possibility of creating crewless tanks (BET), or, as they are commonly called, tanks-robots. This problem is subject to progress in aviation When creating unmanned aerial vehicles (UAVs), many are interested, but often the focus is on issues that are not relevant to the essence of the problem and without taking into account the capabilities of technical means. 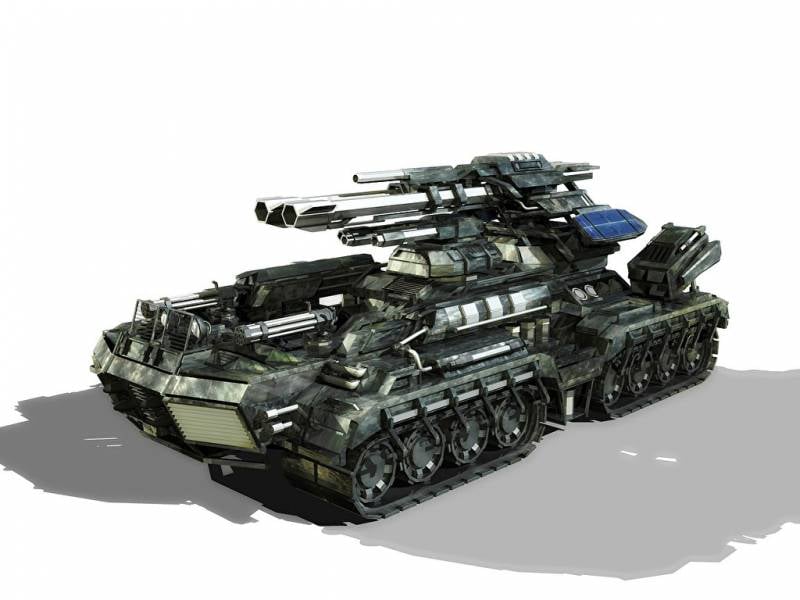 Before discussing the possibility of creating BET, it is necessary to decide what purpose is set for this object, what tasks are assigned to it, methods for solving the set tasks, and technical means ensuring their solution.

The purpose of the development of BET is obvious: to remove a person from a tank to save his life in the process of using this combat vehicle. At the same time, BET must ensure the solution of all tasks assigned to a linear tank without losing the quality of their performance. By definition, a tank is an armored tracked vehicle with powerful weapons designed to be used as the main striking force of the ground forces, which determines the tasks it performs.

In addition to the tank, a number of special purpose vehicles are being developed at its base: reconnaissance, demining, repair and evacuation vehicles and a number of other special vehicles. These objects belong to another class of armored vehicles and require separate consideration.

The tank can be used for its intended purpose in various conditions of combat use, such as: in an offensive on rough terrain or in urban areas, reconnaissance, defense, on the march. In this case, not in all cases the use of BET will be justified, for example, on the march and in defense it is impractical, the use of crew tanks is more efficient here.

When performing the assigned tasks, the tank must move on the ground, search for targets and destroy them using the capabilities of the crew and technical means. Remove the crew from the tank and ensure its control in two ways - to make the tank autonomous or remotely control it.

According to the theory of automatic control, BET can be completely autonomous as an automatic control system (tank-robot) or remotely controlled by the operator as an automated control system (robotic tank). These are two completely different classes of machines. There may also be a hybrid control scheme when the object operates autonomously and, if necessary, the operator can take over control.

Comparison of the BET development with the development of the UAV is incorrect, since the conditions for the use of the UAV in the airspace are much "softer" than the working conditions of the BET on rough terrain, in a rapidly changing environment, among natural disturbances that prevent solving diverse tasks.

At the beginning of the 90's I had to discuss the problems of creating the information and control system of the tank with the developers of the control systems of the space shuttle Buran and the Energia launch vehicle, which they tried to connect to this work. According to their estimates, the solution of tasks by a control system on a tank is not inferior in complexity to rocket and space technology, and in some matters is more difficult.

The BEP in this version must move independently on the ground, overcome obstacles (including suddenly appearing), search for a target, choose the most dangerous, determine the type weaponsaim and shoot.

Only a highly intelligent control system can perform all these operations without human intervention. There is no artificial intelligence, and even more so an “artificial neural network,” as some craftsmen suggest, and is not foreseen in the near future. All this while from a series of fiction.

The maximum that can be realistically realized is the movement of an object under a rigid program on a previously reconnoitered area in order to reconnoiter and identify enemy fire weapons. If necessary, with the possibility of interception control operator. To achieve more at this stage is not yet possible. In this design, the robot tank can not solve the tasks assigned to the line tank.

The BEP in this version should solve all the tasks assigned to the crew of the tank by issuing commands from remote operators. To do this, the facility must be provided with the possibility of obtaining information and remote control:

All these systems on the BEP should be linked to a digital information management system. One may ask: on which of the existing tanks does all this exist? There are no such tanks today, potentially only a tank designed by the Armata, which contains some basic systems, is ready for this.

In this regard, the statement of the UVZ director on the creation of a robotic tank based on the T-72B3 does not hold water, on this tank there is practically nothing to implement such a concept. This is an unsubstantiated statement by the director, not the chief designer, who does not represent what set of issues must be solved for such a tank.

The problem of creating BET is not in the tank itself; conceptually and in terms of its layout, it can be unchanged, but in the absence and complexity of creating the necessary systems to ensure its high-quality control. The most problematic of these are the video surveillance system for driving and orienteering, the transmission of control commands and the navigation system.

Existing television systems do not provide for the creation of a circular three-dimensional picture of the terrain, they only allow to get a flat picture, which is not enough for orientation in the terrain. This problem has not been solved on any of the objects of armored vehicles.

Closest to her decision on the Israeli tank "Merkava". In the “Iron Vision” system developed for this tank, which receives signals from many video cameras placed around the tank’s perimeter, a three-dimensional picture is created via a computer and displayed on the helmet display of the operator. Without such a surveillance system, the BET concept cannot be implemented.

This element of the control system is the most problematic and vulnerable on the part of the enemy. The equipment for transmitting digital information via radio communication channels existing today in the ground forces is not sufficiently effective and cannot guarantee the transfer of control commands in the conditions of opposition from the enemy.

The use of hardware ZAS can provide the necessary cryptographic resistance and eliminate the possibility of the enemy intercepting the control of BEP. It is possible to increase the noise immunity of the channel with the help of special data transmission equipment, but the enemy still has the ability to effectively suppress the communication channel when used on a limited area of ​​the EW system, which is now observed in UAV control systems. To solve this problem, it is necessary to consider the possibility of creating information transmission channels on other physical principles that exclude their suppression.

BET can be developed specially crewless and it will not provide for full crew accommodation or the possibility of retrofitting a linear tank with the necessary systems. The development of a special BT makes it possible to reduce the amount of reserved space and the mass of the tank by eliminating crew members. With this concept, a new unit of armored vehicles appears, the organization of its production and operation, as well as transportation to the place of use is necessary.

More promising is the concept of using the base tank as a base, in which the remote control capability is already incorporated in its standard systems. The tank can be equipped with the necessary systems at the factory or already in the army as needed and used as BET. In addition, it will be difficult for an adversary to determine the place and time of BET use, since linear and crewless tanks will hardly differ in appearance. This concept was laid in the developed tank "Boxer"; it can be laid in the tank "Armata". This concept allows any line tank to be made unmanned.

The BET control machine must also be built on the base of the linear tank chassis, and the operators' workplaces must be equipped with instruments and systems for the jobs of the crew members of the linear tank.

An important question is the number of BET control operators. Operators must perform all the functions of crew members in BET movement control, target search, firing and unit management, that is, there must be three people. It is possible to reduce the number of operators to two people, in this case, the command should be provided by the crew commander, and the quality may be lost when combining the functions of searching for targets and firing at one operator.

As a result, it can be said that BET can be created, only it will not be a tank robot. To do this, there is still no necessary technical means. So far it can be a robotic tank with a remote control that performs the tasks of a linear tank at the command of remote operators.