Monument to Karimov in Moscow. Who and why?

October 22 2018
39
While monuments to the soldiers of the Soviet Union and the Russian Empire are being demolished or desecrated throughout Europe and in the post-Soviet countries, a whole memorial to Islam Karimov, the “democratic” and therefore irremovable leader of Uzbekistan for more than a quarter of a century, is going to be opened in the heart of our country. Uzbeks, enlightened by Karimov’s efforts, achieved such a development in all areas of human activity that they ordered the manufacture of a monument to ... British sculptor Paul Day. The work was paid for by the public charitable foundation named after Karimov. It is worth noting that this fund was considered and considered by the opponents of the deceased in their homeland to be the locomotive of the personality cult of Islam in Uzbekistan.


According to the Fergana information portal, Muscovites will be delighted with the new 2020 year, 31 December 2019, and perhaps earlier, because the sculpture itself is already covered with a cloth. The current mayor of Moscow, Sergei Sobyanin, played a significant role in this.

In the modest opinion of the author, the monument represents the most vulgar cemetery sculptural tendencies of the “saints 90's”, when entire tombs with Orthodox churches, car-like Mercedes cars and jeeps were erected on the graves of the newly shot “authorities”. 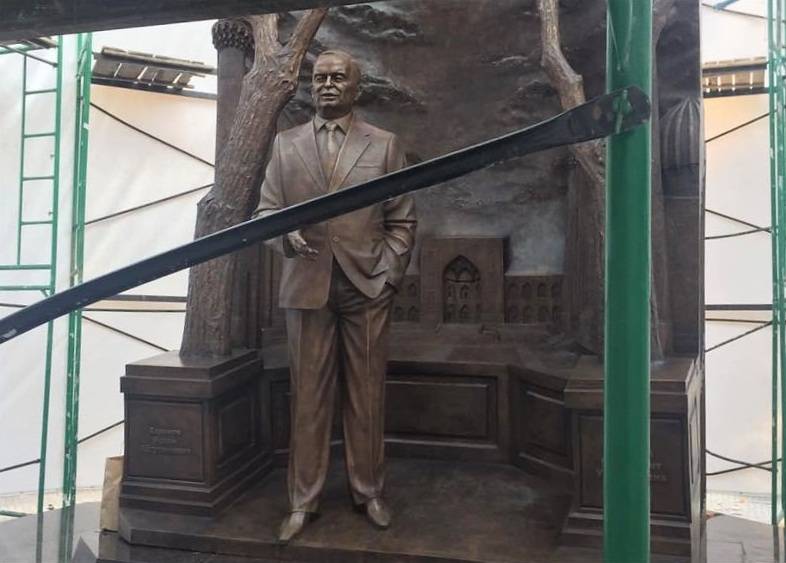 Naturally, the legitimate question is born: why? For Uzbekistan and the diaspora, this is most likely an attempt to show the degree of interaction with the Russian authorities and, of course, the degree of influence. For local authorities, to show a curve of loyalty and once again lose a stump, left after the collapse of the Union, and suffering from phantom pains over the "fraternal" nations. Although personally the author suffers from a headache from his immediate relatives. I must point out that for our country, in which politicians and journalists from morning till night think: “And what will the West say?”, The very choice of Karimov as a showcase “friendship” is more than doubtful. Judge for yourself, the 26-year experience of a person sewn to the presidential chair, the Andijan massacre, the involuntary Islamization of the country, etc., can hardly be called a pure reputation.

So why exactly now decided to erect a monument to such a remarkable figure? It's simple. Uzbekistan celebrates Islam Karimov's 80 anniversary with pomp. Therefore, the guys decided to share the holiday with the Russians on such a significant occasion. So who were you, citizen Karimov?

It all started, as usual, in 90 ... Islam Karimov, a true Communist and member of the Politburo of the Central Committee of the CPSU, in March 1991, unequivocally urged the republic to remain a part of the USSR. And the republic unequivocally voted to remain faithful to Moscow - they voted for it over 90% of the population. Faithfulness was fleeting. Already in August of the same year, Karimov made a feint with his ears and declared the independence of Uzbekistan, and the people ... again unanimously supported their leader. Since then, Islam has been literally glued to the presidency, and in 2007, he ran for the presidency, even bypassing the current constitution of Uzbekistan.

For the sake of truth, it is necessary to point out that the medieval “baity” that was dormant throughout the Soviet years was literally a new trend throughout the whole of Central Asia. The republics, assembled in parts by the Soviet Union, were instilled in socialism for many years, and, having become independent, they began to flirt with democracy, understanding little what it means. The clan system and authoritarianism became inseparable companions of the newly-minted countries of Central Asia. And Uzbekistan here is not a leading place.

Monuments to Saparmurat Niyazov, not all ...

In Turkmenistan, until his death in 2006, Saparmurat Niyazov sat in the presidency. Niyazov managed to survive from all parts of the Russian population and turned Turkmenistan into such a closed country that North Korea is just a resort Cyprus compared to it. In his "fundamental" work "Rukhnama" ("Book of the Spirit") Saparmurat even decided to outstrip the diggers of the Black Sea, stating that the invention of the wheel and the cart belongs to the Turkmens. In general, the cult of Niyazov's personality is a separate topic. Saparmurat rose to such an extent that he rewrote ... the calendar, renaming April in gurbansoltan-eje in honor of his mother. This is not counting the actual destruction of pension payments, the dismissal of 15 thousand medical workers, the closure of the Academy of Sciences of Turkmenistan, the abolition of ballet, etc., and so on. And all this was accompanied by the arguments of the Turkmenbashi, fantastic due to illiteracy. It is the Turkmenbashi, because the title of the president looked like a mockery against the background of this leader.

In Kazakhstan, Nursultan Nazarbayev, in theory a democratic president, is still sitting in his place. At the official level, Nazarbayev does not approve of the persecution of the Russian population of the republic, but in practice everything is different. And most recently, Nursultan himself proposed to translate the Kazakh written language into Latin. In the outline of the cult of personality, Nazarbayev in the future can even overtake Niyazov if his loyal supporters still manage to rename one of the cities of Kazakhstan to Nursultan-grad!

But back to Karimov. After Karimov came to power, he immediately chose an authoritarian path, given the problematic region of Central Asia, it is difficult to blame for this. However, having received an elegant space for maneuver, especially after the extension of presidential powers in 1995, I could not achieve any rapid development of the country. This is partly due to rising Islamic extremism. Islamization and the strengthening of the role of religious leaders have become a real threat not only to his regime, but also to the country as a whole. 16 February 1999 was a terrorist attack in front of the government building in Tashkent. The explosion took 16’s lives on innocent people. 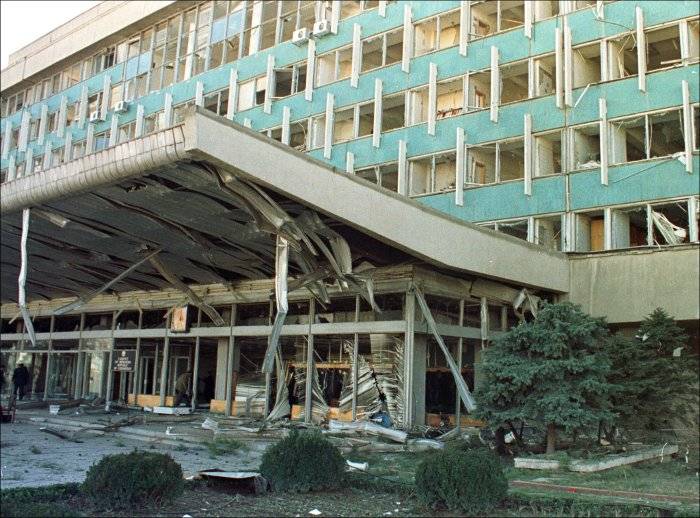 In 2000, in the presidential elections, Islam Karimov again becomes the leader of the country. And already in 2001, a military airfield built by the Soviet Union near the city of Karshi Karimov handed over to the United States to deploy an air base there. Uzbekistan received the status of a "partner" of democracy, as well as a small but pleasant trifle in 10 million dollars a year for the use of the territory. The Yankees left the base of Karshi-Khanabad only in 2005 year. And not because Karimov was inflamed with love for Russia, the United States simply stopped making money for the “utility” services.

In the same year, the 2005 massacre began in Andijan. 11 February The trial of 23 by local businessmen, followers of Akram Yuldashev (a former member of the terrorist organization banned in Russia, Hizb ut-Tahrir), caused widespread unrest. Soon followed by attacks on the local patrol and inspection service, the military unit, the local prison, the city hall and the security service of Uzbekistan. Everywhere it was accompanied by the theft of small weapons, slaughter of Interior Ministry employees, etc. Everything turned into a bloody rebellion. 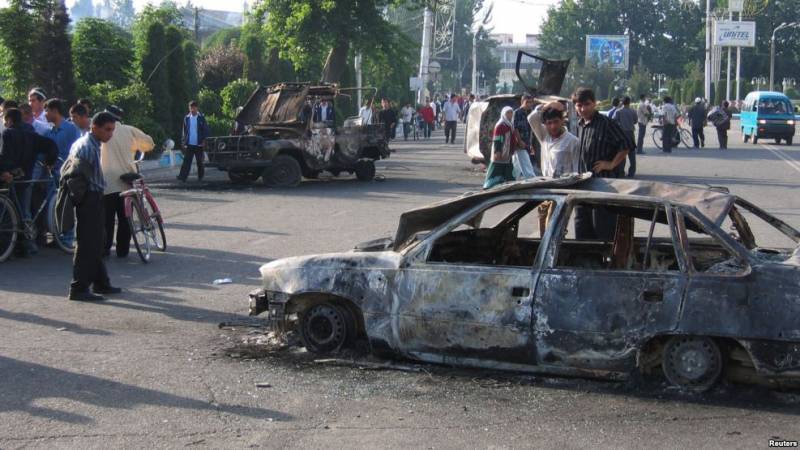 As a result, the rebellion was firmly suppressed, many of the protesters and accidentally caught in a crowd of people, including the simple hostages of the rebels themselves, were killed and maimed. The survivors of the unrest rushed towards the border with Kyrgyzstan. On the way, they stumbled upon a group of Uzbek soldiers and were shot at. Foreign policy Karimov condemned everything, except Russia, India, China, etc.

The United States, of course, condemned Karimov. Judging that the "democratic partners" conceived to shove him from the throne, Islam suddenly became friends with Russia. And even handed over the Russian base "Karshi-Khanabad." For a while. This is against the background of how Uzbekistan first entered the CSTO, then left it, and then re-entered.

At the same time, the Russian language began to slowly disappear from the territory of Uzbekistan. Russian cadres were also driven out. The main thing is that the Basmachi of the first half of the 20 century in the society turned into national heroes, and this is an excellent platform for the growth of nationalism. And we should not forget at least the ambivalent policy of Karimov, dashing between Moscow and Washington. And the question is not even that “it is impossible” - it is possible, if it is in the interests of your country. And honor and praise to Karimov, if it benefited Uzbekistan. But what does this have to do with the monument in the capital of Russia, for which Karimov could only be a temporary partner, and not a friend at all? And according to the Hamburg score, it’s time to be pragmatists and stop using such empty and “harmful” words like “brothers”, “friends”, etc. 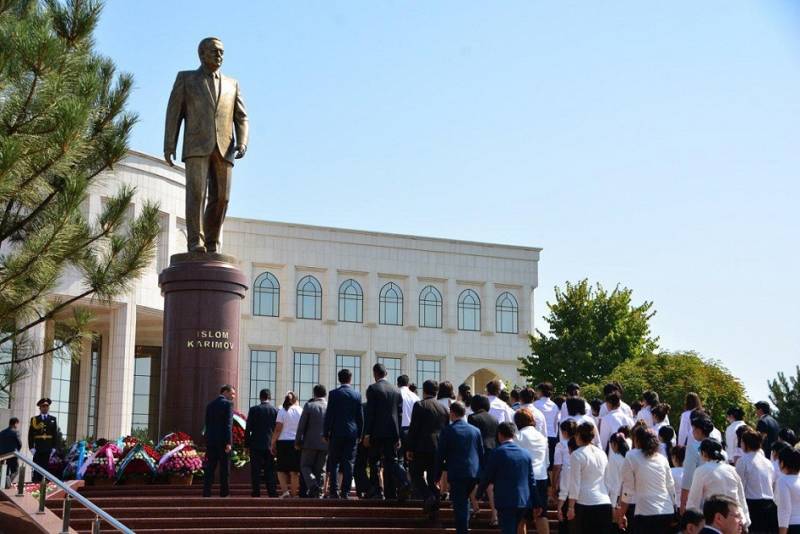 Monument to Karimov in Uzbekistan

Moreover, the monument to Karimov in Moscow looks like an export of the cult of personality. Indeed, in the homeland of Islam, the scale of worship is second only to Niyazov. During the 80 anniversary celebration of Karimov, the following headlines appeared in the official press: “The monument to Islam Karimov is buried in flowers”, “We are proud to have lived in one mahalla with an outstanding personality”, “A sample of dedication”, “Life in the name of freedom and prosperity” , "The Great and Beloved Son of Our People", "The Founder of Independent Uzbekistan" and even "The Heart That Had Universe". 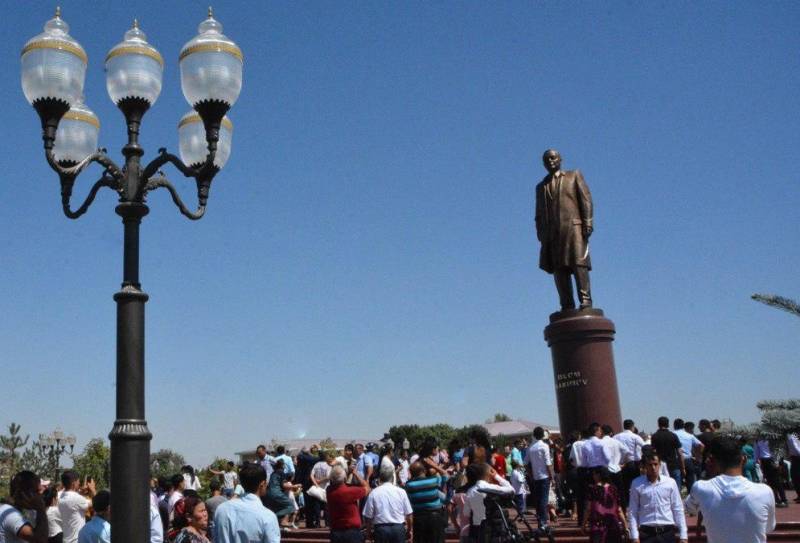 The monuments to Karimov in Samarkand, Tashkent and Karshi have already been discovered, not counting the construction of the mausoleum at the place of his burial. During the "celebration", the literary heritage of Islam was published, and he managed to write so many folios that Tolstoy would envy. At the same time, many Uzbek media claim that signs of debunking the personality cult of Karimov appeared in the republic. Therefore, it is not known which undercurrents are in Uzbek politics now. And it is unlikely that anyone will say exactly how all these advances to the Karimov monument in Moscow will ultimately affect the “loyalty” and “friendship” of the two countries.