October 21 2018
11
Kampfpistole translated from German combat pistol - a series of developments during the Second World War. Their essence consisted in the creation of combat ammunition for signal pistols and conversion of signal pistols into a grenade launcher with special sights and rifle butts. A characteristic feature was the creation of a large number of caliber and above-caliber grenades designed for such weapons, and in most of the samples the possibility of using standard signal cartridges was retained. As a result, fairly common modernized signal pistols became a serious multi-purpose assault weapon.


Attempts to increase the firepower of an infantryman on the battlefield have been made for a long time. Compact weapons were created, both successful and not so good. Their creation was dealt not only by professional designers, but also simply self-taught, in whose circle of direct responsibilities the development of weapons was not included. Such a development was the KMB - Barinov’s pocket mortar, created by the technician-lieutenant of the Red Banner Baltic Air Force fleet G.P. Barinov in 1943. But Barinov did not offer a thing that was unique at that time, perhaps he had an idea and was guided by German models, which by that time were widely used at the front.

The Germans began developing such weapons back in the 1930s. The command of the Wehrmacht paid great attention to the multifunctional use of various types of weapons, and therefore put before the German designers the task of creating powerful infantry melee weapons. The German gunsmiths, while pretending the demands of the military, developed several interesting and promising designs, including ammunition-weapon complexes, both from scratch and based on existing and used systems. Separately, in the series of German short-barreled weapons of the Second World War period, there are combat and assault pistols, which were created on the basis of a widespread 26-mm signal pistol. 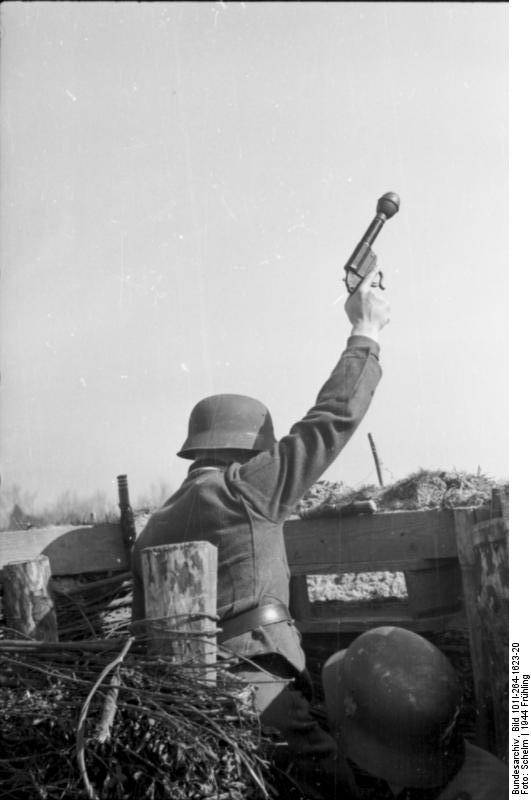 One of the first special combat pistols was the grenade launcher complex, which consisted of Walter’s 26-mm signal pistol designed by Walter 1928 sample or 1934 model of the year and a number of grenades: anti-personnel fragmentation of two 361 LP anti-personnel fragmentation 326 LP and anti-tank cumulative combinations. LP and H 326 LP. This grenade launcher complex was used mainly in close combat, when firing from other types of weapons was impossible, since it was connected with the possibility of hitting their soldiers, and the greater effectiveness did not allow the use of hand grenades.

Taking into account the existing need to conduct aimed shooting from this grenade launcher, a metal shoulder was added specially for the Leuchtpistole pistol with folding cushions on the butt plate, such a device significantly increased the accuracy of fire from a pistol. In addition to the stop, which was attached to the frame of the signal pistol by a special clamping device, a folding sight was mounted on the barrel, it was designed for two shooting distances - 100 and 200 meters. Butt was necessary not only to ensure the accuracy of shooting. Recoil from such a shot hand simply could not stand, which led to injuries. But the scope was not really necessary, shooting could well have been conducted without him, by sight, the distance of the battle allowed it. The total length of a Leuchtpistole pistol with a butt was 590 mm, the weight of the model model 1928 of the year (with a steel barrel and frame) was 2,5 kg, the weight of the model 1934 of the year that was already made of aluminum was 1,9 kg.

Leuchtpistole allowed the effective use of fragmentation grenades. The shooter used such a pistol for mounted shooting at a range of 70-80 meters. Frag grenades were effective against enemy personnel both in the offensive and in the defense, and they could also be used to suppress firing points and organize passages in wire obstacles. 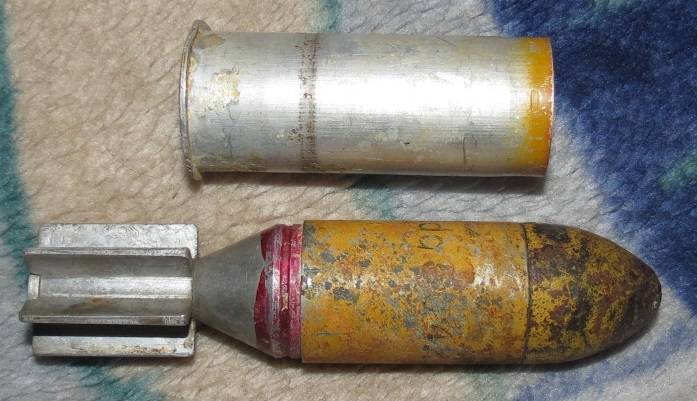 Anti-personnel fragmentation 26-mm grenade 326 LP (Wurfkorper 326 LP) consisted of a percussion fuse and directly from a grenade with four stabilizers, which were assembled in a single cartridge. The loading of the Leuchtpistole signal pistol with the 326 LP grenade did not require the shooter any additional accessories and was carried out from the breech, similar to the process of loading the weapon with lighting and signal cartridges. The 326 LP fragmentation grenade was intended for firing at 150 - 250 meters, but at long distances, due to its high dispersion, the use of this ammunition was impractical. At a distance of up to 100 meters, pistol shooting was fired with fire, and starting with 150 meters with an 326 LP grenade it was possible to cover targets that were behind shelters or folds of the ground. Firing at a distance of less than 50 meters was strictly forbidden, since a large fragmentation effect of the weapon became dangerous for the shooter himself (the fragmentation of the fragments was estimated at 30 meters).

Grenade throwers were advised to use such grenades for firing at the loopholes and windows during battles in populated areas. On the basis of this munition, anti-tank cumulative 326 H / LP grenades with four tail stabilizers and an H 26 LP grenade were also created, in which the ring stabilizer served as stabilizing planes. These cumulative grenades were able to penetrate armor up to 50 mm thick.

Also, a 60-mm over-caliber grenade with a small 361 LP rod (Wurfkorper 361 LP), which consisted of a fuse and directly fragmentation offensive grenade of the remote action of the 1939 sample of the year, could be used with the pistol. In the army, such a grenade received the unofficial nickname "egg", which was explained by its oval shape. Instead of the standard fuse, a special plastic guide rod was screwed into this grenade, equipped with a flammable mechanism with a burning time of 4,5 seconds. At the upper end of the tube was fixed primer-detonator, and in the lower part was expelling charge of black powder. Such a grenade was intended for firing at a range of no more than 70-80 meters. The radius of destruction of the fragments was equal to 20 meters. 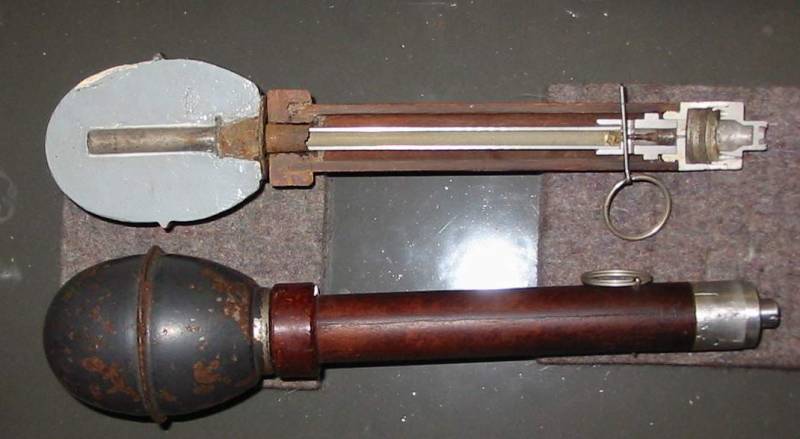 Before using this grenade, the shooter had to carry out several actions to bring it to combat readiness. The whole point was that the increased charge of the 60-mm 361 LP pistol grenade required the reinforcement of the aluminum barrels of the 1934 sample guns of the year. Before loading into the breech of the gun inserted a special brass sleeve having a large hole at the bottom. After that, the grenade assembly was inserted into the Leuchtpistole flare gun from the muzzle, while the safety pin had to be removed from the rod. Only after that the trigger of the signal pistol was cocked.

Such manipulations with the loading of a 361 LP grenade pistol were, in comparison with the 326 LP unitary ammunition, quite laborious and dangerous for the grenade launcher, since the time to bring the gun on alert was significantly increased, and the time for close combat was of paramount importance. In addition, after every 100 shots it was recommended to clean the brass sleeve, which was contaminated with a powder. The downside was that the 60-mm 361 LP grenade was quite clearly visible in flight, in contrast to the 326 LP unitary fragmentation grenade.

In 1942, the German gunsmiths decided to develop a special Kampfpistole combat pistol based on a signal pistol designed by Walter. Unlike its smooth-bore predecessor, this model had five rifling holes in the barrel, which allowed it to demonstrate significantly better combat characteristics - accuracy, range and effectiveness of fire. On the left side of the body of a military pistol for aiming shooting, a spirit level and a new graduated sight were attached. In addition, light metals began to be widely used in the design of this gun, which made it possible to reduce the mass of weapons per 780 gram. The witted eye could easily appreciate the new pistol from the standard signal weapon: on the left side of the Kampfpistole breech, the letter Z was painted with luminous paint (Zug, German - cut). 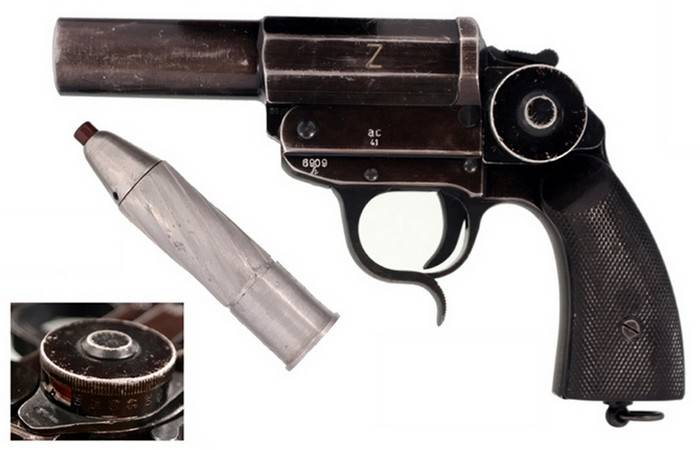 Combat pistol Kampfpistole with a rifled barrel, a grenade to it. Detail gauge for aiming

For shooting from a new weapon, a caliber grenade was used with ready-made cuts Sprenggranatpatrone-Z. This grenade was intended to fight the enemy manpower at a distance of up to 200 meters. She hit targets within a radius of 20 meters. The grenade, which was combined into a single whole with a short aluminum sleeve (27 mm length), was a shot that did not require the shooter to do anything to bring the weapon into combat readiness. Thanks to the spiral protrusions located on the grenade body, she received a rotational movement at the moment of the shot, this contributed to an increase in the accuracy of shooting from Kampfpistole. A propellant charge was placed in the aluminum sleeve of this fragmentation grenade. At the same time, the presence in the bore of the rifling barrel did not allow the use of the previously developed fragmentation pistol grenades 326 LP and 361 LP, as well as lighting and signal cartridges.

That is why, the set of ammunition used in the Kampfpistole combat pistol was expanded due to the development and adoption of a new 61-mm anti-tank high-caliber cumulative grenade of the 1942 model, which received the designation Panzer-Wurfkorper 42 LP. According to Soviet data, this grenade pierced 50 mm armor, according to German more - 80 mm armor at a distance of 75 meters. With skillful use and a fair amount of luck with its help, it was possible to fight even with the Soviet average tanks T-34 in close combat. The 42 LP cumulative grenade consisted of a rod and a housing that were connected to each other by a check. The core had rifling, which made it possible to use this ammunition not only for firing from Leuchtpistole signal pistols, but also special Kampfpistole combat pistols. Charging the 26-mm Walther flare pistol with a 42 LP cumulative grenade did not require any additional accessories from the shooter. Like the 361 LP grenade, this munition was also inserted from the muzzle of the barrel. And also, as with the 361 LP fragmentation grenade, in accordance with German instructions, due to the high power of the grenade, shooting could only be carried out with the shoulder rest attached to the gun.

The rather high cost of a Kampfpistole combat pistol, in whose construction it was necessary to use expensive light metals, and the inability to fire other pyrotechnic and special ammunition from it, caused ERMA and Carl Walther to stop ordering thousands of such pistols, their mass production.

At the same time, the idea itself was not completely forgotten. The gunsmiths managed to find a way out of the current situation, having turned, at first glance, to an elementary, but rather original design solution - the same Leuchtpistole flare gun was equipped with an Einstecklauf rifled liner. This allowed the pistol to be fired with both 326 LP frag grenades and grenades with ready-made “Sprenggranatpatrone-Z” and 42 LP rifles, as well as lighting and signal cartridges. The new model received the designation Sturmpistole - assault gun.

To increase shooting accuracy and greater stability while firing the pistol grip of this model as well as in the signal Leuchtpistole and combat Kampfpistole pistols, a special folding shoulder rest was attached, and the nozzle was fixed to the barrel, designed to 200 meters. Later, the Sturmpistole was modified, getting a barrel length 180 mm. With the butt and the new barrel, the total length of the weapon reached 585 mm, and the weight - 2,45 kg. From 1943 onwards until the end of World War II, the German arms industry managed to release more than 400 thousands of liner inserts intended for easy reworking of 26-mm signal pistols into an assault weapon.

The Germans themselves assessed such pistols as a universal, effective, and most importantly, simple weapon. They were widely used not only in the Soviet-German front, but also in Africa, as well as in other theaters of war.