The operational and tactical skills of the militia of the South-East of Ukraine. Ending

October 19 2018
16
Militiamen, faced with a knownly stronger rival, were forced to fight from the very beginning on the principle of “if you want to live, know how to spin”. The Ukrainian troops, on the contrary, tried to fairly straightforwardly cover the entire territory of LDNR with a kind of gigantic stranglehold, in the hope of cutting off the rebels from Russia. After the failure of the plan, it was decided, in the manner of a blitzkrieg, to inflict dissecting blows in several directions, leaning against all available tanks and light armored vehicles. At the same time, of course, they did not forget about the massive use of artillery. At first, it worked and endangered the integrity of the defense and territory of the LPR, but the Ukrainian units eventually got bogged down in exhausting battles on the territory of the Southeast. Serviceable tanks of the Ukrainian Armed Forces were methodically knocked out, due to which, for example, they were not enough for Ilovaisk, and "ideological" volunteer battalions at the legendary "Shushpantsers" were sent to battle. 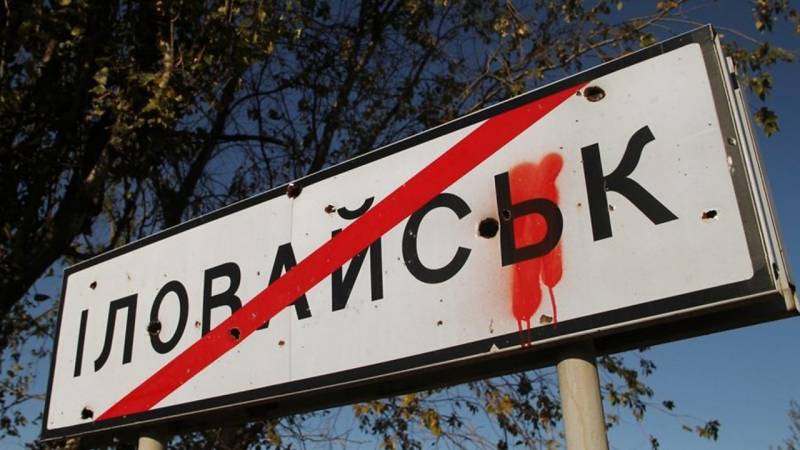 At the same time, the self-defense of Donbass cannot be called absolutely perfect and devoid of flaws. First of all, this is a limited human resource: there are still too few armed people at the front, opposing the enemy army. In addition, their contribution was made by the attacks of the Ukrainian Armed Forces on the civilian population, as well as refugees who reduced the mobilization resource of the territory. A serious disadvantage of the militia, especially in the initial period of the war, was the shortage of all types of weapons, including conventional small arms. There was a shortage of ammunition and artillery ammunition. This was one of the reasons hindering the growth in the number of LDNR fighters. Frequent attacks by sabotage groups from Ukraine sowed fear in the minds of some civilians in Donbass and increased the confusion in populated areas. After that, some simply refused to take it in their hands. weapon and stand up to defend their land, fearing retribution even deep in the rear. By 2016, these contradictions were eliminated, and now only in one DPR the number of regular armed units exceeds 40 thousand fighters. Small arms and heavy armored vehicles in the near future, qualitatively and quantitatively, may be equal to the armament of the enemy. But everything looks rosy if you do not look at Ukraine, in the armed forces of which there are more than 160 thousand people and another order of 1 million in reserve! Only tanks in varying degrees of combat readiness 2890 copies, 8217 armored combat vehicles, 1302 SAU units of various calibers, 1669 copies of the artillery barrage and around 620 MLRS. Even if no more than 30% goes into battle of all this (due to a lousy technical condition), such an armada will have to be considered at least. And in LDNR there is practically no stock of equipment with spare parts even in a faulty form. A more positive situation was with uniforms due to the fact that many were equipped at their own expense, as well as through the channels of the "Voentorg". 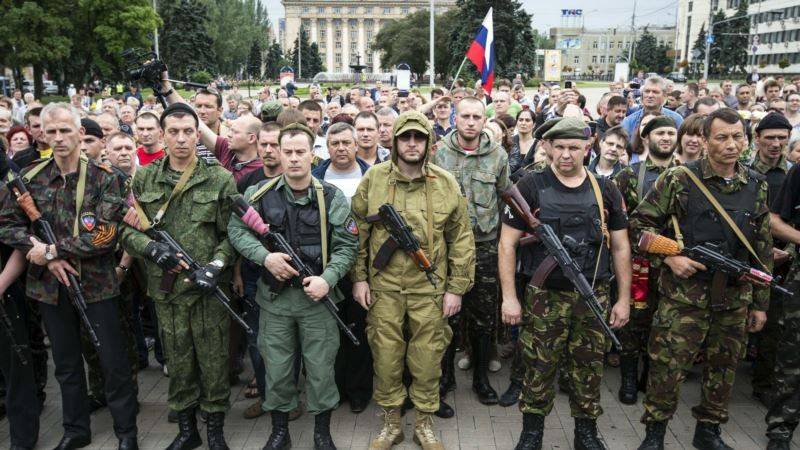 The problem of 2014-2015's confrontation with Ukraine was the actual absence of a single command, as well as the rivalry of field commanders for leadership. Bezler, Strelkov, Khodakovsky, Mozgovoy, Bednov, Kozitsyn and others at various times claimed leadership positions in the politics of Novorossia. At the same time, this did not result in large-scale fratricidal bloodshed, and in the face of an external threat, field commanders (atamans) managed to unite efforts. There were even attempts to create a council of field commanders — Mozgovoy and Strelkov took the initiative, but failed to gather it. Later, the strengthening of the power vertical both in the DPR and in the LPR did not pass without bloodshed - the most recalcitrant were physically destroyed. 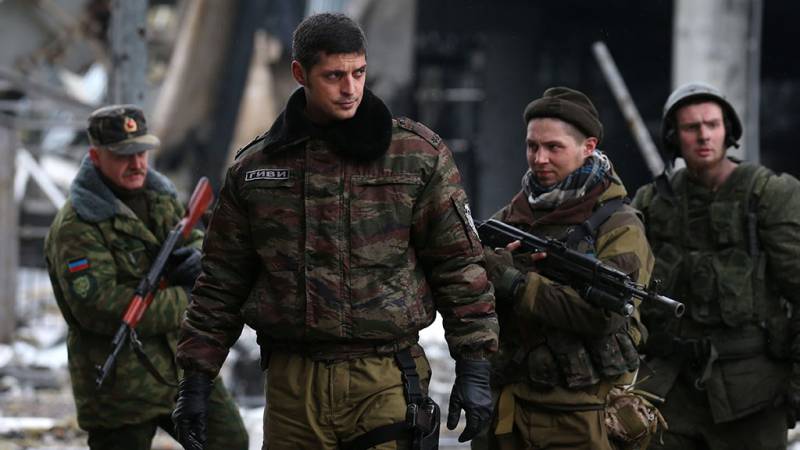 Now about the strong operational and tactical qualities of the militia of Donbass. First of all, this is an extraordinary flexibility, boldness and decisiveness of commanders, as well as a powerful charisma that attracts at least the minimum number of fighters to the ranks of self-defense. Such examples, of course, were Arseniy “Motorola” Pavlov and Mikhail “Givi” Tolstoy. In some situations, only their determination and courage could turn the tide of combat operations on entire sectors of the front. But the rank and file of the militia was excellently prepared for combat, this was especially expressed in comparison with the soldiers of the Armed Forces of Ukraine (ATU). The superiority of the forces of self-defense was in the moral and psychological aspect, which was expressed in the entry into the battle with a much superior in number enemy. Thus, in the summer of 2014 of the year near Lomovatka, one militia unit was able to hold an entire column of armored vehicles moving in the direction of Bryanka. There were (attention) in the militia six fighters who held back three armored personnel carriers, a tank and several Uralov with a mass of ATO fighters. 13 of August of the same year, the infantry of the Armed Forces of Ukraine, as well as volunteers, marauders, richly flavored with the five T-64, several self-propelled guns, armored personnel carriers and infantry fighting vehicles entered Miusinsk. The Motorola unit met them only with 80 fighters, one BTR and three to five mortars. The final was the battered center of the city and the retreating forces of the ATO.

In these examples, the readiness of the militia to contact battle was manifested, which distinguishes them favorably from the APU. Of course, the “ideological” Ukrainian volunteers also eagerly went to combat contact, but, apart from the burning desire to kill, the necessary skills that former people from Maidan were deprived of are vital. And those who had the skills, that is, the rank and file of the Armed Forces of Ukraine, were only ready to go on the scorched earth after the artillery fire shaft. In addition, some militiamen had considerable experience of not just serving in the army, but also participating in military conflicts, for example, in Chechnya. They became a kind of mentor for the young recruiting, and in combat with the APU in many ways copied the techniques and tactics of the Caucasian conflict. 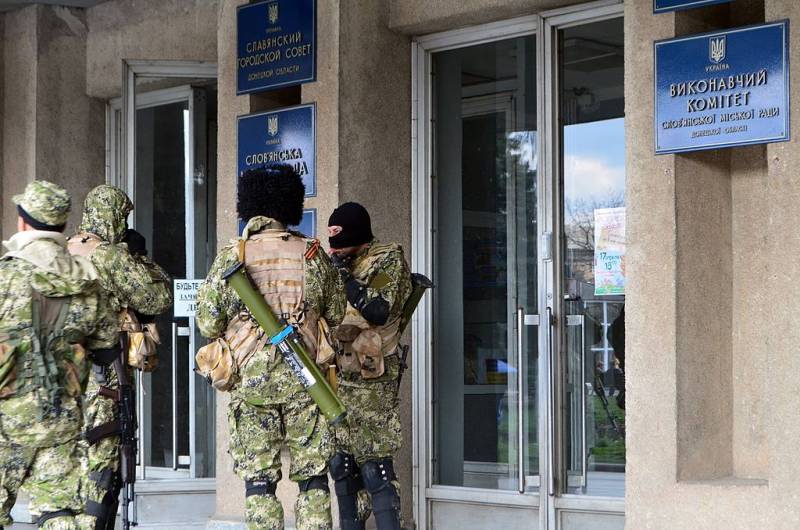 Ivan Konovalov, director of the political conjuncture, said: “I was on both Chechen campaigns, and today I see how experienced militia members use their experience. This can be seen in uniform, equipment, tactics. Some even cut their beards, as in that war. And most importantly, the militia here is complete freedom of action. For them, the statute does not work, they fight as it suits them. This can also explain serious tactical successes, in particular, in the work of the DRG ”. Do not forget that the overwhelming majority of the militias are fighting over the territory, which they know very well, and in the conditions of the semi-partisan conflict this is a serious advantage over the enemy. A typical militiaman is a mature man 30-40 years old, and sometimes even a 50-year-old, which also leaves a definite imprint on the tactics of combat. More experienced militia fighters are more successful than 20-year-old calves from the next call of the Armed Forces of Ukraine in matters of survival and are much more stable psychologically. 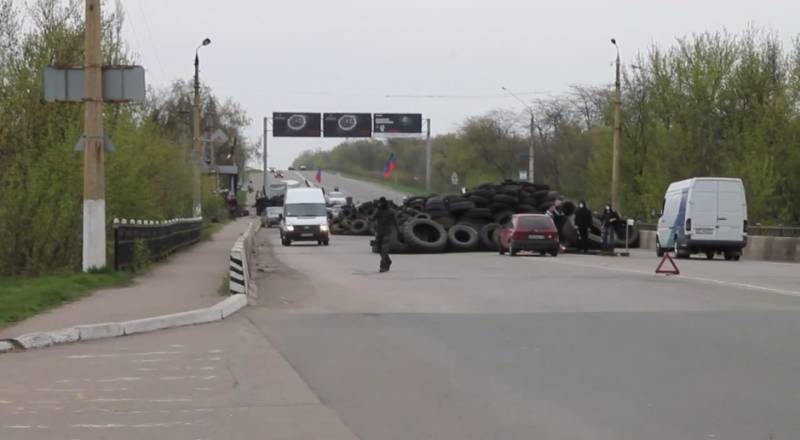 The majority managed to serve in the army, many were contract soldiers, which makes them much more professional users of weapons than their opponents on the other side of the front. This is the reason for the victory of the militia specialists in an artillery duel with the "gunners" of Ukraine. Tactics of predominantly smuggling was much more effective than reckless and ruthless shelling of settlements in Donbass by ATO forces. In addition, the general level of technical competence of the population of the industrialized Donbass played into the hands of self-defense forces: equipment, in particular, was recovering much faster and re-engaging. Previously, the Ukrainians militiamen entered into battle homemade drones with installed security cameras. This was one of the reasons for the refusal of self-defense forces from the bloody assaults of the dominant heights. Now, even for reconnaissance in the interests of artillery, a single Chinese or self-made drone is sufficient.

The temporary outcome of the Ukraine-LDNR confrontation was a relative lull, which cannot be interpreted otherwise than the victory of the Donbas self-defense forces. With such a gigantic imbalance of the initial forces, the militias managed to bleed and wear down the enemy, who now has much less motivation for the war.

Author:
Evgeny Fedorov
Photos used:
wikipedia.ru
Articles from this series:
The operational and tactical skills of the militia of the South-East of Ukraine. Part of 1