Would the Kursk sailors be saved today?

October 18 2018
141
More than 18 years have passed since the tragedy with the Kursk nuclear submarine in the Barents Sea, but many questions remain relevant for a number of reasons. And often relevant with a negative sign. So, on the eve of the material published on the portal FLOT.com, which is dedicated to the state naval segment for the rescue of submariners in critical situations. The material refers the reader to the events of 2000, when the Russian Navy actually had no means to rescue the crew members of the Kursk, after the explosion, which was at a depth of more than 100 meters.


В an article by Dmitry Zhavoronkov it is said that the increased intensity of naval exercises and cruises of ships (including submarines) of the Russian Navy is still not sufficiently supported by the availability of means required for the rescue of the submarine crews.

It is noted that the development of rescue operations in relation to conditionally emergency submarines by divers of the Russian Navy was practiced at depths up to 60 m, moreover, recently (the data of the mentioned resource), the depth was reduced. Perhaps due to the operation of normobaric costumes HS-1200, designed for immersion depth is up to 60 m.

An example of the use of the Alagez search and rescue vehicle (project 537) is given. During the March training sessions, the ship engaged the deep-sea rescue device AC-30, which discovered the emergency submarine mock-up at 80 depth. No rescue divers were reported to dive to this depth.

In the material referring to military experts, it is noted that these are not the depths that can guarantee a well-adjusted work to rescue the crew of submarines.

The situation is helped to improve the rescue ship of the ocean class "Igor Belousov" with a serious set of technical means for deep-sea rescue. In particular, the “Igor Belousov” has on board a deep-sea diving complex GVK-450, which occupies one fifth of the ship and is designed for 120 seats. The device (created by JSC Tetis Pro) is 5 residential pressure chambers that can accommodate 60 submariners with emergency submarines. 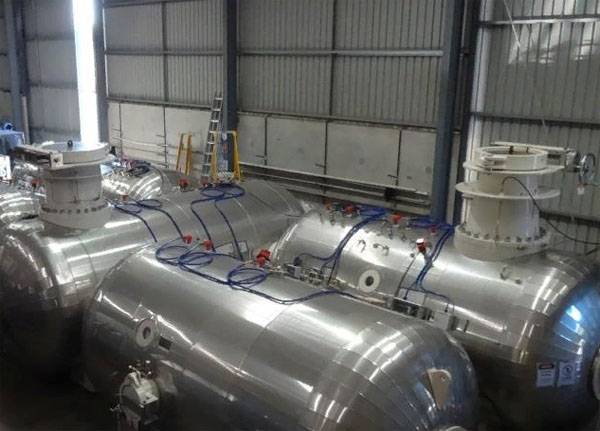 From the material of Denis Emelyantsev, the head project of JSC "Tetis Pro":
In residential pressure chambers of the deep-sea diving complex is quite comfortable. Each diver has a separate berth, which can be separated from the rest of the compartment volume with a curtain. The bed has a bedside lamp, headphones for listening to music, a shelf for books and personal items. In the living compartments a lavatory has been allocated with all household amenities, including a hot shower that is so necessary after leaving the water. For divers inside the compartments of the pressure chambers, there is a seating area with a table at which they eat. Hot food is given to them outside through a special gateway, and dirty dishes are sent back through it. Even TVs are provided in the compartments. 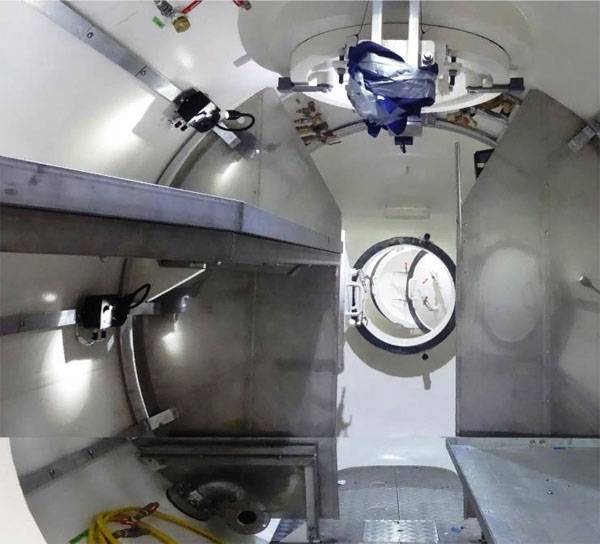 Also the ship equipment is an underwater bell for work at a depth of up to 450 m with the above-mentioned normobaric costumes HS-1200. Plus, the “Igor Belousov” in the rescue arsenal - deep-sea “Bester-1” of the 18271 project with a working depth of diving to 700 (according to other data - to 720) meters. The device has a docking (with emergency exit submarine) camera, and is able to simultaneously evacuate the submariner's 22.

The ship “Igor Belousov” is part of the 79 squadron of the rescue fleet of the Pacific Fleet.

For all the fleets of the country, it is obviously necessary to increase such (modern) search and rescue ships that could promptly take part in the evacuation of submariners in the event of an emergency situation.

If the same GVK-450 were in service with the Russian fleet (Federation Council of the Russian Navy) in 2000, for obvious reasons, at least some of the Kursk sailors were saved. But today it makes no sense to say “if”, but it makes sense to ask the question of how fully equipped the modern Russian Navy has the technical means to conduct timely search and rescue evacuation activities.