"Meteors" and "Rockets" will return to the rivers of Russia

October 20 2018
60
By 2021, the first high-speed hydrofoil ship (SPK) of the new generation will appear on the water expanses of Russia. At the same time, different models of such ships will be created separately for lake-river, sea and ocean routes. This was told in a recent interview with Sergei Italians, general director of the TsKB them. R.E. Alekseeva.


The main advantage of the SEC over any other craft is speed: the hydrofoil vessel rises above the surface of the water, significantly reducing the friction of the bottom of the ship on its surface, which allows the SEC to speed 3-4 more times than any other representative of the water transport. At the same time, marine and oceanic SECs, known as the “Cyclone”, will be more resistant to sea rolling than ordinary cruise liners. 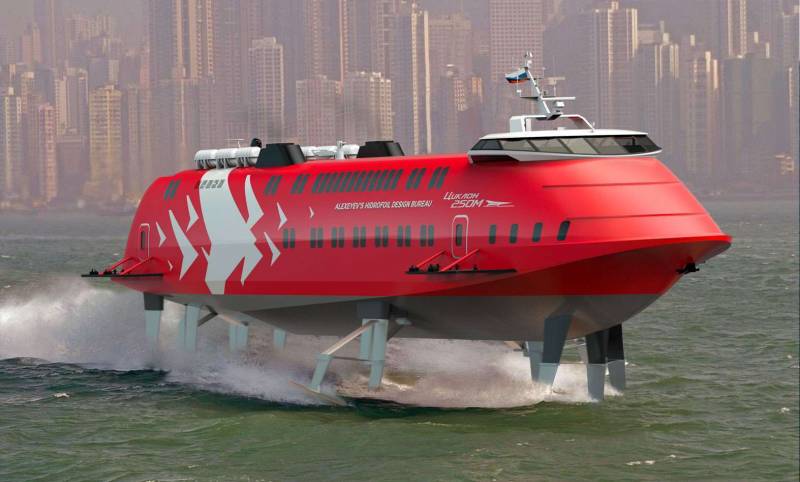 At the moment, the only representative of domestic fleet SEC on the Russian rivers and reservoirs remained the legendary Meteors. But their operational resource is practically exhausted, and these machines are outdated both from a technical point of view and from the standpoint of comfortable movement on such a water vehicle.

Today, Alekseev Central Design Bureau specialists are developing a replacement for Meteora. On river routes up to four hundred kilometers long, these will be high-speed boats with the design name Valdai-45Р, and on long-haul routes up to six hundred kilometers they will be the same name for the Meteor V2 SEC. The latter will be able to overcome long distances in water, for example, the Volga distance between Nizhny Novgorod and Ulyanovsk, and in the future, between Nizhny and Saratov, and Volgograd. It is assumed that the "Meteors" of the new generation will rip the water surface, not only of the Volga-Mother, but of the major rivers and lakes in the north-west of the country, in the Trans-Urals and Primorye.

Marine SPK will be high-speed vessels of the project “Comet 120M”. The lead ship of this project was launched and put into operation on the Black Sea this summer. By next year two more ships of this class will be completed. These works are carried out in the framework of the revival of the Russian fleet of ships on hydrofoils, which will be engaged in the carriage of passengers on domestic short-haul flights, and will also serve passenger traffic on sea and ocean routes both domestically and abroad.

Ocean Cyclones will be more capacious and more powerful than river “Rocket” twice: they will take up to three hundred passengers on board and cover distances of about seven hundred miles. At the same time, all new SECs will be equipped with two M70FRU gas turbine engines, the latest power plants of the latest generation. Naturally, the salons of the new Russian ships will be projected and equipped according to the latest design word of world shipbuilding with the use of composite materials and the use of comfortable aviation-type seats, ship air-conditioning system, wireless network and other modern technological innovations.

Moreover, a unique retractable front wing system will be developed for river SECs in order to enable these boats to freely approach the shore, which is not equipped with berths or floating landing stages. Such a system is planned to be installed on a test sample already next year, in order for 2020-2021. It was possible to mass-produce models with fixed and splitting hydrofoils.