October 17 2018
30
Work continues on the construction of the railway part of the Crimean Bridge. To date, builders have already laid 6 from 38 kilometers of railroad tracks, and two tracks fit in at once, said the deputy general director for infrastructure projects of the general contractor company Stroygazmontazh, Leonid Ryzhenkin. 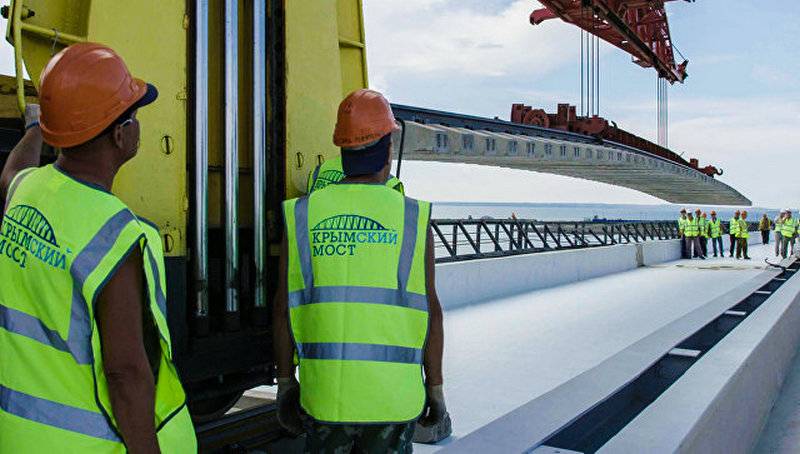 As Ryzhenkin explained, the laying of the double-track railway was started this summer from the Taman coast and at the moment 6 kilometers from the 38 are already laid. For laying the railway tracks, Russian thermally strengthened rails are used, which are supplied to the Taman Peninsula, where they are connected to the sleepers at the star assembly base, and ready-made rail and sleepers are transported to the bridge by special utility trains to the place of installation.

At the same time, the construction of a double-track railway approach to the bridge, 18 km in length, is also under construction on the Crimean Peninsula. They received the first batch of sleepers, which are already being prepared for layouts on the prepared sections of the roadbed for the formation of railway tracks. In total, by the time of the opening of the railway part of the Crimean bridge, on the peninsula they plan to repair about 150 kilometers of railway tracks.

The opening of the second railway part of the bridge across the Kerch Strait is scheduled for December 2019.