AA-12: a gun that was created forty years

October 17 2018
23
Combat shotguns slowly but surely give up their positions in power structures, even of a country like the United States, where combat guns have traditionally been widely used in the army and police structures. 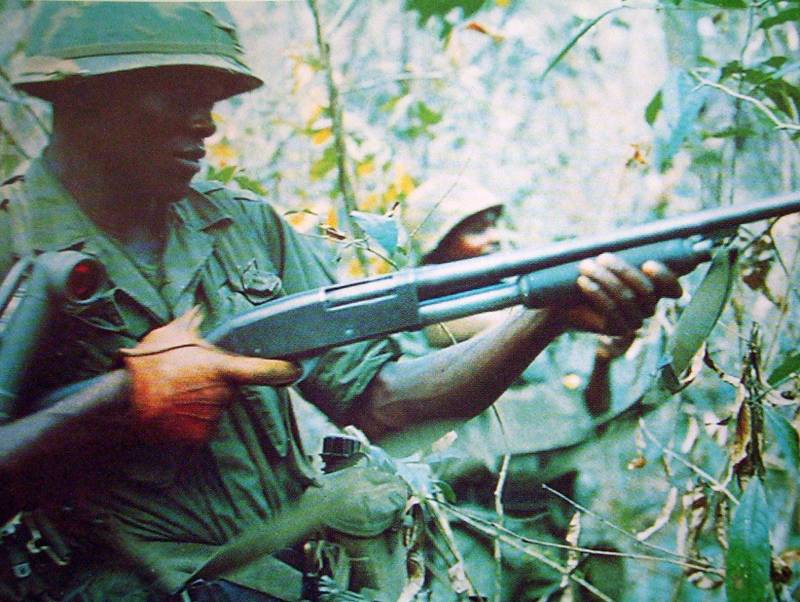 So, if, even during the Vietnam War, the pomping "Remington" or "Mossberg" were necessarily present in each infantry unit as weapons direct fire support, today “shotguns” are used mainly in highly specialized units such as boarding teams. Yes, and there they are increasingly performing auxiliary functions. For example, they are used for knocking out doors or shooting non-lethal ammunition. 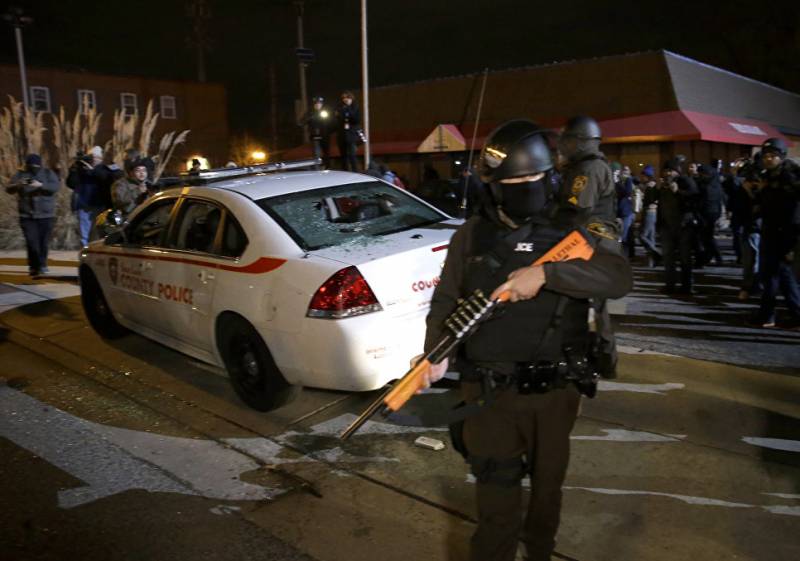 And in the police, where the widespread use of combat shotguns is associated with tradition, some limitations of the law and financial capabilities (guns are usually cheaper than other long-barreled weapons), they are more well suited for more compact and versatile submachine guns and more powerful and accurate "tactical carbines "(as in the United States it is customary to call assault rifles with an exceptionally self-loading fire mode).

Today, even in the assault groups of SWAT, the use of “shotgun” has become rare. 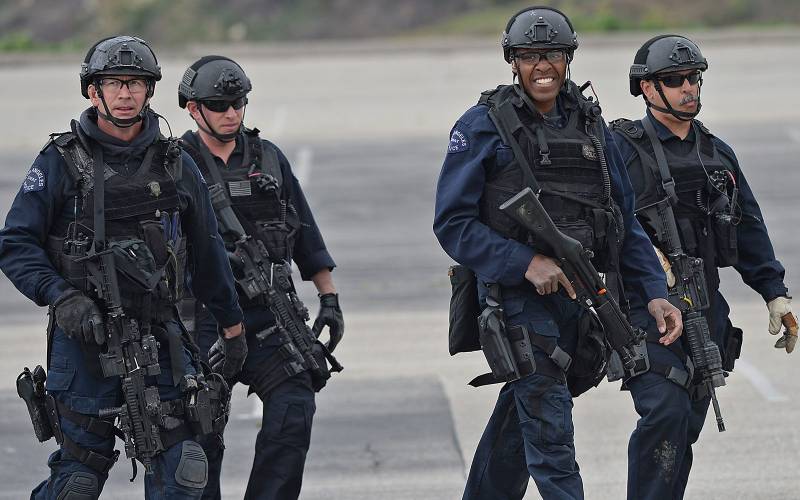 As a result, today the manufacturers of "tactical guns" orient themselves primarily on the civilian market. Moreover, the “combat mission” of the device is primarily a marketing step aimed at attracting customers.

It is in this vein and should be considered the release of the civilian version of the "legendary Attisson's gun". Rather, its modernization under the designation AA-12. 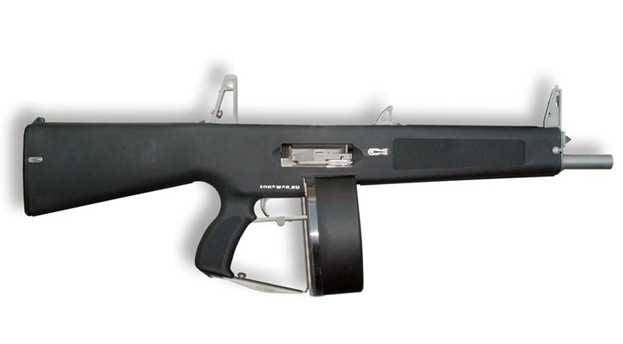 The American company Sol Invictus Arms from the State of Florida, which in recent years has owned the rights to this weapon, announced its entry into the civilian market with this really curious gun.

Recall it history. During the Vietnam War, units of the US Army operating in the jungle were in dire need of weapons capable of providing a high density of fire to crush the enemy in sudden clashes at short and ultra-short (only a few meters) distances. American infantrymen complained that, with all their obvious advantages, their pump-action shotguns they used were not fast enough, their stores had a small capacity, and reloading took time. The single M-60 machine gun was too bulky and unreliable.

It was the lack of direct fire support, which was sufficiently effective for short-circuit combat, at the disposal of American soldiers, which led engineer Maxwell J. Atchisson, an enthusiastic engineer, to develop the necessary weapons. 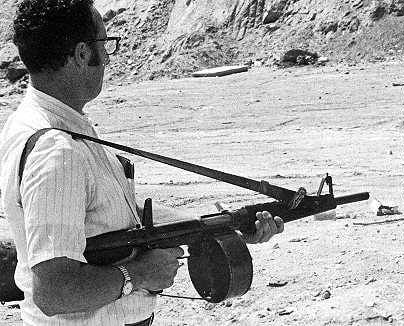 In his design, he decided to combine the strengths of two completely different types of weapons - a shotgun and a machine gun. That is, to create a smooth-bore gun with automatic fire mode. Given that the standard 12x70 chuck fits 9 ratchets with a diameter of 8,5 mm or 16 with a diameter of 8 mm, you can imagine what kind of flurry of lead can bring down a line of such weapons on the enemy.

The solutions used by Atchisson in the gun were very unusual. So, he used in it the traditional for submachine guns, but practically not used in the guns automation system with a free gate in combination with firing from the open bolt and pinning the capsule on the roll out of the bolt (to reduce recoil).

However, this approach required the use of a completely steel and rather massive receiver, which was made in the form of a pipe, as well as a heavy cylindrical valve with a mass of 1,4 kg.

The receiver had a greater length and reached almost to the butt plate of the butt, providing a very large length of rollback, which provided both a reduction in recoil and a decrease in the rate of fire in automatic mode. To ensure shooting with an open bolt Atchisson used the trigger mechanism from the Browning BAR-1918 light machine gun.

Food was carried out from a box magazine on 5 cartridges or drum capacity of 20 cartridges. The weight of the latter was more than two kilograms! So that during the shooting the store did not vomit recoil from the fixings, it was backed by a special metal bracket connected to the pistol grip. Atchisson Assault Shotgun (AAS) - this name received Atchisson's gun.

AAS has received a shank from M-16 and similar linear dimensions. Although the weight approached the M-60 (7,3 with 20-charging shop).

The gun was introduced in the 1972 year, but the Pentagon was never able to get interested. And, it seems, not only because the war in Indochina went to its logical conclusion.

AAS turned out to be overly heavy - both he and wearable ammunition. So, five equipped stores weighed 11 kg! Plus a five-kilo gun. But the soldier needs to carry more grenades, water, a dry ration, a first aid kit, a helmet, a bulletproof vest - and all this is in the jungle. 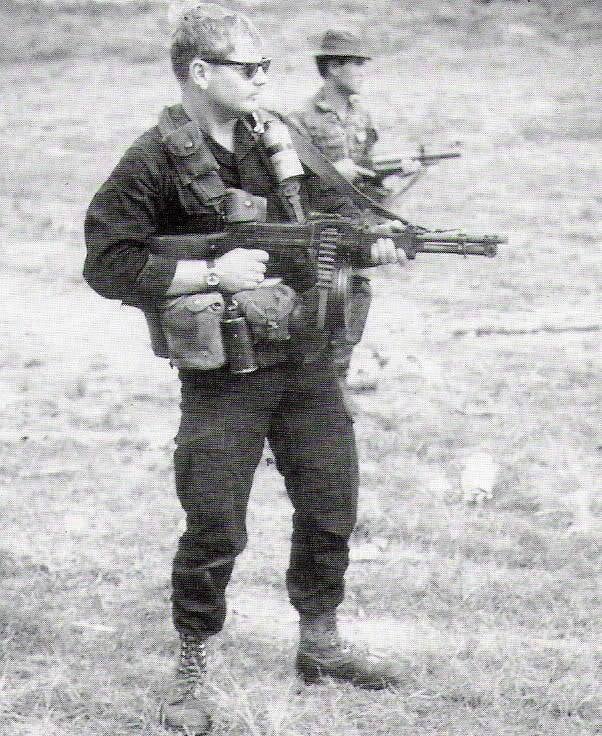 By the way, the American fighters increased their firepower using the good old Tommy Gan - a Thompson submachine gun, or captured AKs with a drum magazine from the PKK on 75 cartridges, which were much better tolerated in long bursts of fire than M-16.

But especially appreciated captured RPD, in which the Americans in the regimental weapons workshops shortened the barrel, turning the machine gun into a compact assault weapon. 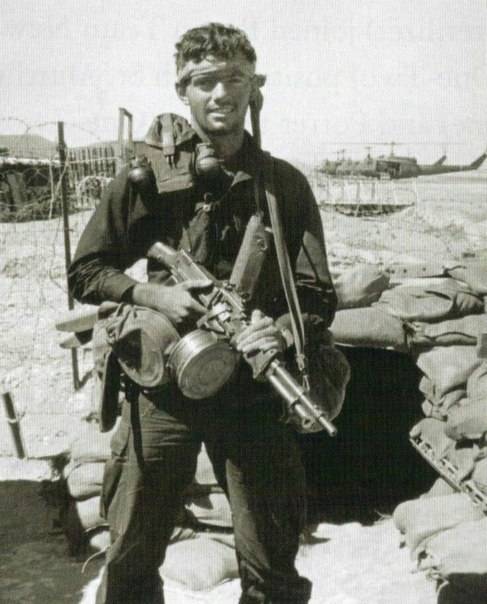 Armed with such weapons, the fighters were in the head patrol, ready to bring very dense fire to the suddenly appeared enemy. And not a lead canister, but quite eight gram bullets of the M43 cartridge.

However, Atchisson was not discouraged, continuing to improve his offspring. At the beginning of the 1980-ies, he radically changed the design, using a more traditional vapor-control automatics in combination with rigid locking of the barrel.

In addition to the use of automatics, Atchisson redesigned the firing mechanism and receiver. The new rifle, named AA-12, had a gas piston located above the barrel that actuated the bolt. Locking was carried out by a wedge movable in a vertical plane, located in the front part of the shutter. To lock the wedge went up and entered the groove in the shank of the barrel, thereby unloading the receiver.

Receiver was made at the same time with the forearm and butt and consisted of two halves, left and right, connected with pins. The stock was hollow, as the bolt rolled back after it was shot. The trigger mechanism provided the possibility of firing single shots and bursts, shooting was still conducted from the open bolt. Meals were supplied from detachable stores, similar to stores from the earliest types of guns.

In 1987, due to the threat of bankruptcy, he sold the rights to the shotgun Jerry Baber from the American company Military Police System, which continued to work on improving the gun.

More than a hundred changes were made to the design, the shotgun became known as Auto Assault-12 (AA-12), became shorter on the 26, and almost half a kilo lighter than the earlier model. For it, 8-box and drum magazines were developed - on the 20 and 32 cartridges. 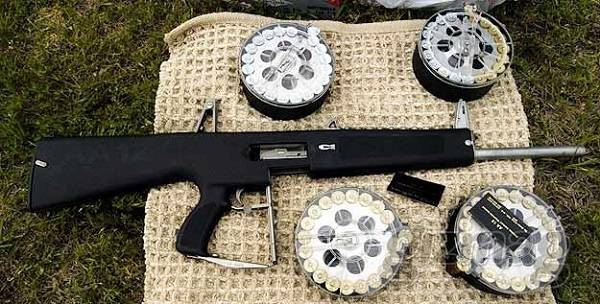 The developers claim that the shotgun does not require special care and lubrication, since the self-lubrication and self-cleaning are done when firing. Cleaning should be done after every 8000-9000 shots. However, this can be considered an advertising and not too conscientious gimmick. Even if the weapon is capable of working without cleaning and lubrication, destructive and irreversible changes will occur in the field, in the barrel bore and on the bolt mirror for 8000 shots without maintenance.

Recall that when the M-16 was only put into service, it was argued that the rifle was also “self-cleaning”, and it cost many American soldiers life.

The FRAG-12 special ammunition developed in 12 by the British Experimental Cartridge Company, Ltd. can be used in AA-1994. and Action Manufacturing Inc. 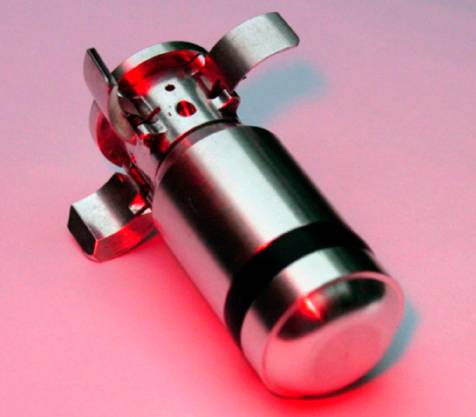 It is reported that the high-explosive projectile FRAG-12HE punches a cold-rolled steel plate with a thickness of 6,3 mm. At the same time, the maximum effective range of shooting with these charges reaches 200 meters, which is beyond the power of standard shotgun ammunition. 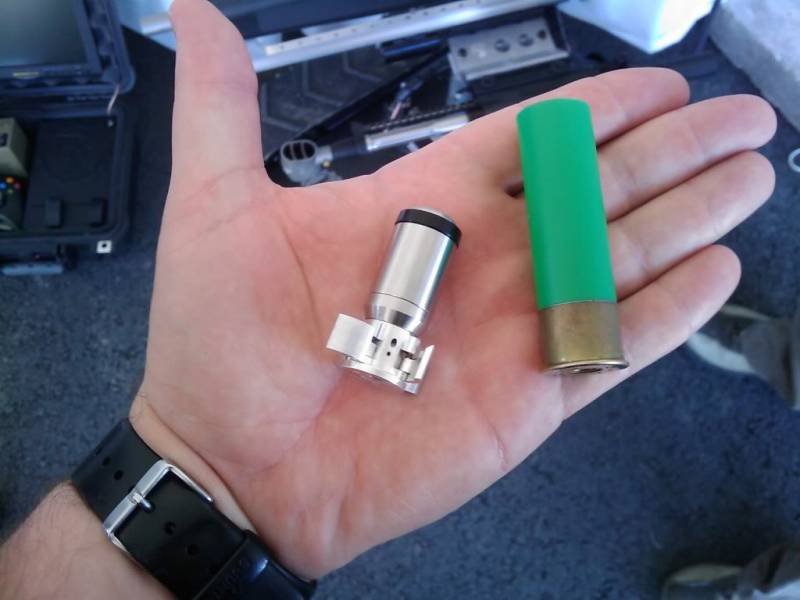 The high-explosive armor-piercing FRAG-12 HE-AP penetrates steel armor with a thickness of 12,7 mm, which makes it possible to effectively disable enemy vehicles, for example, when defending roadblocks, and also to destroy potential explosive devices from a distance.

However, over the past 24 years since their creation, FRAG-12 have not been claimed by the army or other security forces. 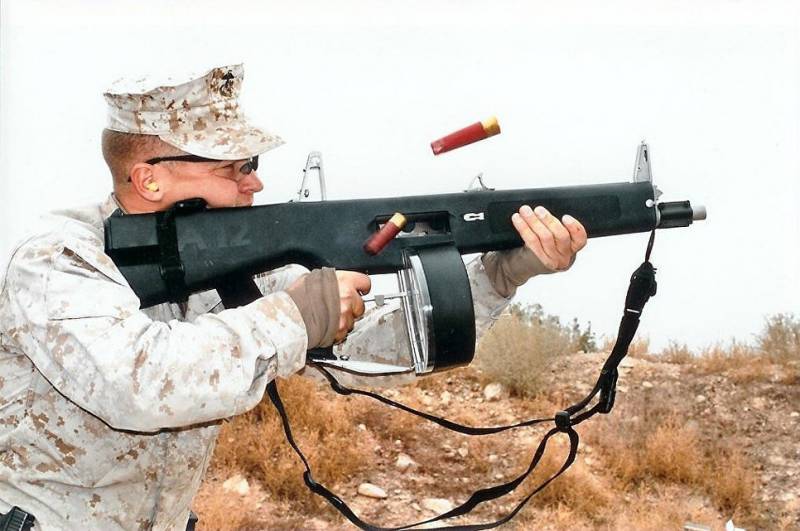 However, at AA-12, it didn’t work out too brilliantly. In 2004, ten guns were transferred to the United States Marine Corps for testing. Shotguns seemed to be praised, but that was all. They tried to draw attention to the rifle, equipping the UAV with it and making on its basis the Hammer protection system, installing double AA-2 on the H40X-12 turret. 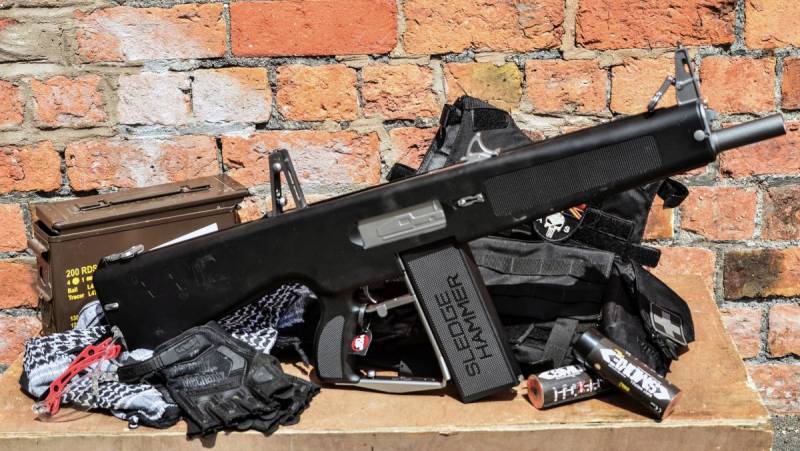 However, due to its unusual and brutal appearance, the gun had cinematic success and is featured in computer games. Perhaps that is why this shotgun is noted in some weapon reference books along with serial weapons. 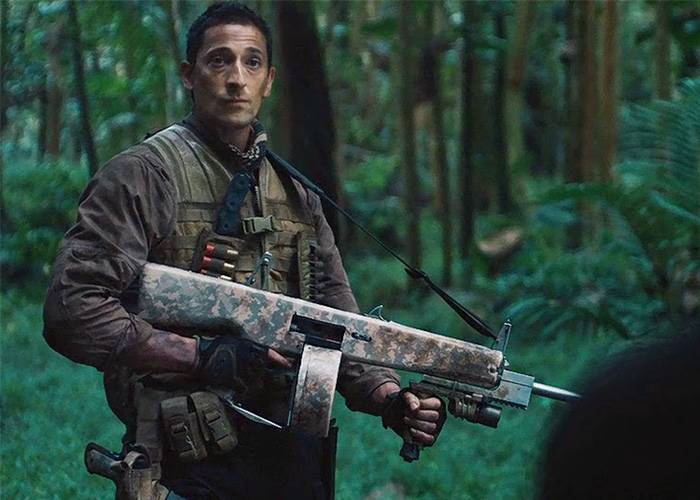 Now they want to offer it to citizens, having previously deprived the main “raisin” - automatic fire. Surely AA-12 will find its buyer among collectors and lovers of exotic weapons, of which there are much more in the US than in Russia. However, it will hardly become a bestseller. The time of this weapon is irrevocably gone.

And its niche in the world market is tightly occupied by the “Saiga” and “Vepr”, which are considerably superior to AA-12 in their performance and operational convenience. 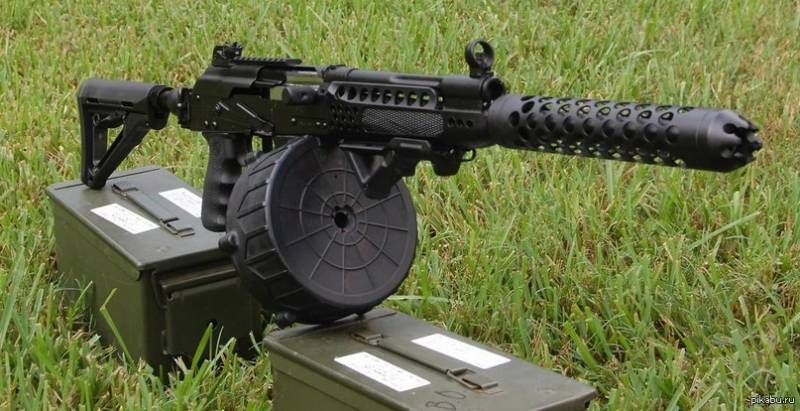 Under these Russian guns in the United States, by the way, they produce high-capacity drum shops. And in tuning workshops they are easily upgraded, providing the possibility of automatic fire. This option is in demand with PMC operators.