Without direct involvement can not do! Changes that can change the Donbass strategy of Moscow

October 17 2018
156
A number of very important and illustrative military-political, operational-tactical and social-religious events occurred in the 2018 year that was derailed by the Square in the second week of October. If we analyze the epic with the illegal provision of autocephaly of the Orthodox Church in Ukraine by the Synod of Constantinople, which is very successfully promoted with the support of the illegitimate President Poroshenko and Patriarch Bartholomew, as well as with fanfare of the nationalists arriving in Kiev and bought by the Ukrainian top, ” stock


Firstly, this is the final introduction of complete destabilization into the integral and long-established configuration of world Orthodoxy, which should maximize the degree of tension in the interaction between the supporters of this perfidious solution and his opponents, which will inevitably lead to unrest in the unfavorable “independent”. Secondly, this is a distraction of the public from much more significant military-political events occurring in parallel with the “church lawlessness”. 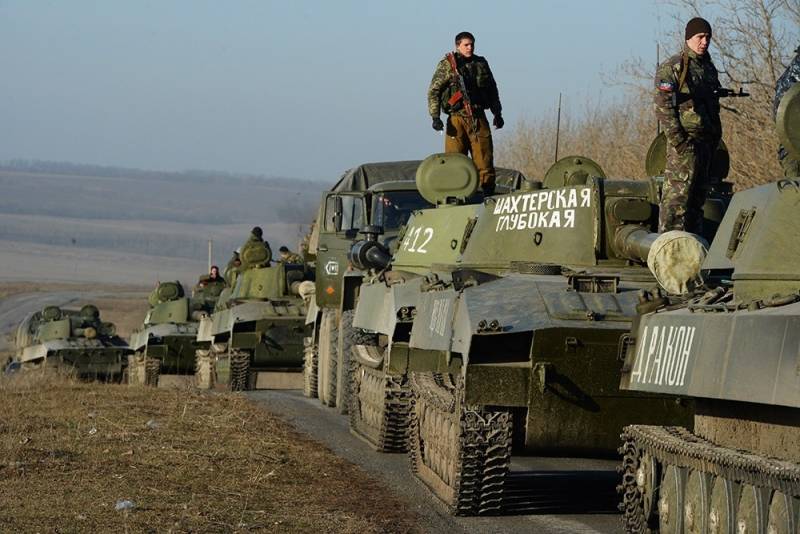 Naturally, the latter are fraught with an order of magnitude more devastating consequences, which only one “player” will have to rake, which four years ago made a strategic miscalculation, becoming the guarantor of the practically unviable and counterproductive “Minsk format” and also limited to the “simplified” version of New Russia only 1 / 3 territory of the former Donetsk and Lugansk regions. This time, when the General Staff of the Ukrainian Armed Forces, supported by the Pentagon, is already ready to launch an offensive operation at least in the 2-x operational directions of the Donbass theater of operations (Telmanovsky and Novoazovsky), it is no longer possible to disregard what is happening with the help of the corona "expression of concern" if the first line of defense of the 1 th AK NAM DNR was successfully broken through on the same section of the 35-kilometer Telman’s isthmus, for which the 36-I separate brigade of the so-called naval infantry of the Armed Forces of Ukraine is preparing, and 56- I am a motorized infantry and 79-I airborne assault brigade, the situation can get out of control not only in the southern part of the Donetsk People's Republic, but also in the border areas of the Rostov region.

Unfortunately, such spitting, expressed in allegedly accidental / side blows of artillery batteries of the Armed Forces of Ukraine on the residential infrastructure of the Russian cities of Donetsk, Gukovo, as well as the farms of Primiusky and Vasetsky (Rostov Region), Moscow “safely” wiped during June-July 2014, the very height of the hostilities for the liberation of the eastern and southern districts of the Donetsk and Lugansk people's republics, only once “snapping” from the MLRS 9K51 “Grad” on the junta’s particularly active artillery positions. And despite the fact that, according to official data, at least one citizen of the Russian Federation received injuries incompatible with life during those blasphemous attacks and another 9 was injured, supporters of Minsk-1 / 2 continued to mistakenly pin hopes on the awakening of common sense in the heads of the Kiev elite.

How many victims such a position turned out in the end, we know well. But if we are guided by the purely operational-tactical situation that developed in the Donbass in the summer - 2014 in the autumn, then we can conclude that the General Staff of the Russian Armed Forces as a whole and the command of the Southern Military District in particular had the opportunity to almost completely disengage from participating in hostilities on the side of the then the militia, providing only a decent "North Wind", because the tactical knowledge, experience of conducting combat operations of drugs, as well as the operational suitability of the APU armored component were critical ki low level. Consequently, at that time, Moscow was confident in the success of the formation of defensive lines by the emerging 1 and 2 army corps of the LDNR People’s Militia, as well as the possibility of carrying out an equally successful and lightning counteroffensive on the positions of the Armed Forces of Ukraine.

Today the situation is much more complicated. Firstly, the majority of mechanized units of the Armed Forces, located on the contact line, due to the prolonged absence of an active phase of hostilities, have an combat readiness of armored vehicles of about 70-80%. Secondly, almost all tank the Ukrainian army’s fleet is equipped with active defense complexes (from standard “Contact-1” and “Contact-5” to much more advanced “Doublets”, “Knives” and “Shields” that provide the main battle tanks T-64BV / BM “Bulat” and T-72A is equivalent resistance from armor-piercing feathered subcaliber shells of the order of 850-900 mm, and from cumulative - about 1050-1200 mm), and therefore pierce the frontal projections of these machines using the usual BOPS “Lekalo”, “Vant” and “Hairpin”, or monoblock ATGMs "Baby", "Metis" and "Competition" are unlikely to succeed (with the exception of the undisguised section of the gun mask and the mounting sector of the infrared spotlight). Only anti-tank missile systems such as Competition-M, Kornet-E and Chrysanthem-S equipped with ATGMs with tandem cumulative warheads can save the situation.

Thirdly, several dozen restored T-80B / BV T-1B / BV tanks have already come into service with the tank units of the Ukrainian Armed Forces. Despite the fact that these machines do not have the best equivalent durability from BOPS and CS due to the presence of the ancient DZ "Contact-1,3", they have much better speed capabilities both on the highway and on rough terrain. Consequently, to make a breakthrough along the line of Belaya Kamenka - Kuznetsovo-Mikhaylovka (in the direction of the border between the DPR and the Rostov region), the tank units of the APU can be approximately 1,4 — 64 times faster than using the T-217BT MBT. Some may note that such an action is fraught for the Armed Forces of Ukraine with a new Telman boiler or a complete defeat, because the defense of the republic organized a mass production of the 9600-mm MLRS "Cheburashka" with a range of 64 and 36 guides on each combat vehicle - PU, which will burn Ukrainian tanks formations in the course of promotion through the forest-steppe area of ​​the southern part of Donbass. But not everything is so simple here. Despite the fact that “Cheburashka” is indeed an excellent rocket launcher system, the APU received from our American “colleagues” a sufficient number of counter battery AN / TPQ-1 (V) “Firefinder” radars to determine the positions of most XNUMX-12 gun batteries and rocket artillery go AK NM DND on the Southern Front. Consequently, after the very first "otvetok" the coordinates of the Donbass gunners-defenders will be calculated from the ascending branch of the trajectory of the shells, and a massive suppression fire will follow.

Considering that Firefiders transferred to Ukrainian formations operate in a centimeter X-band (8 — 12 GHz), it will definitely not be possible to suppress them with the help of NM DPR’s operational EW systems for disrupting the operation of tactical communication systems and GPS radio navigation system modules . And therefore, without the direct participation of the Russian Armed Forces in the next escalation in the Donbass theater, it is unlikely that the republic can be defended. Indeed, for only one calculation of the positions of the Ukrainian AN / TPQ-36 at night (it is at this time, the Ukrainian Armed Forces usually carry out offensive actions) an aircraft of the optical and radio reconnaissance aircraft Tu-214Р is needed, which later transfers the coordinates of the working Firefinders to ground stations with further retransmission to the battery communications of the artillery units of the DPR army.

In connection with the latest statement, the press secretary of the President of Russia, Dmitry Peskov, in which a high-ranking official said that “Moscow will not respond to the possible use of weapons Kiev in the Donbass due to the fact that Russia is not a party to the conflict, ”the network created fertile emotional ground for raising anti-Russian sentiments among supporters of Novorossia and the republics of Donbass. Nevertheless, such a statement can be interpreted as the next stage in bringing Kiev’s vigilance to sleep to further implement tougher responses to Poroshenko’s new shares and companies, while without direct military assistance from Russia, the Donbass, in the event of an escalation, certainly will not.

In order to come to a similar conclusion, it is enough to pay attention to the fact that already since 2019, the Donetsk and Luhansk people's republics are even more closely integrated into the Russian economic structure, taking Russian scientific production standards and certification as a basis. However, we note that Moscow needs to begin more harshly and quickly suppress the actions of the Armed Forces of Ukraine, because as a result of the “Minsk fuss” and the last criminal Poroshenko’s decree in the LDNR, Ukrainian militants killed at least 6 civilians, including a young girl, as a result of artillery fire. (2001 year of birth).